Given their importance both in RPG history and in the memories of many players, it’s not surprising that Ian Livingstone and Steve Jackson’s Fighting Fantasy gamebooks have been adapted into many different kinds of video games over the years. Some of them simply did the obvious, turning the books into text adventures. More often than not, however, the developers would get creative, turning out everything from first-person action/adventure games to Tomb Raider knock-offs. As a fan of the books, I ended up trying out most of these games as they released, and I can say that the main thing they had in common was that they weren’t very good at all. Then smartphones and tablets came along, and all of a sudden, Fighting Fantasy games found their feet. Fighting Fantasy Legends ($4.99) continues that bout of good fortune, offering an awesome new take on the classic gamebooks. 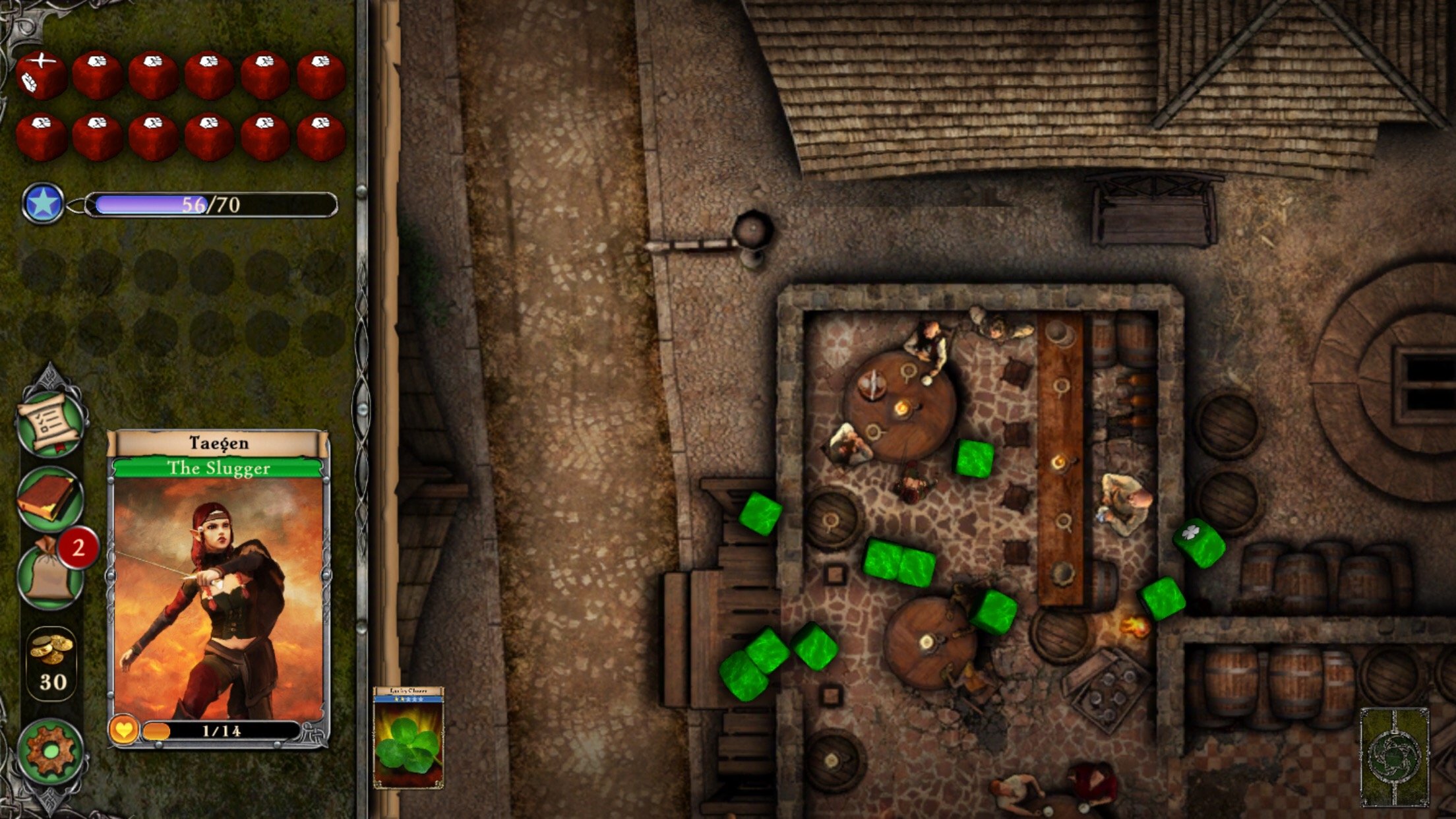 Even on mobile, we’ve seen a few different approaches to adapting these books. In the beginning, we received more or less straight adaptations of the gamebooks from Big Blue Bubble and then Tin Man Games. Then inkle broke everything open with their stunning take on the Sorcery! ($4.99) mini-series, transforming the gamebooks into a cross between a board game and a full-on RPG. Perhaps inspired by that effort, Tin Man recently released their own unique spin on the original Fighting Fantasy book, The Warlock of Firetop Mountain ($7.99). It maintained the decision-making of the books, changed the combat into a mini-TRPG system, and presented the whole thing like a board game complete with miniatures. Well, it’s a bit confusing, but now we have another developer in the mix. Nomad Games, the fine folks behind the iOS version of the classic board game Talisman ($3.99), have collected three of the early titles in the Fighting Fantasy series into one big game. 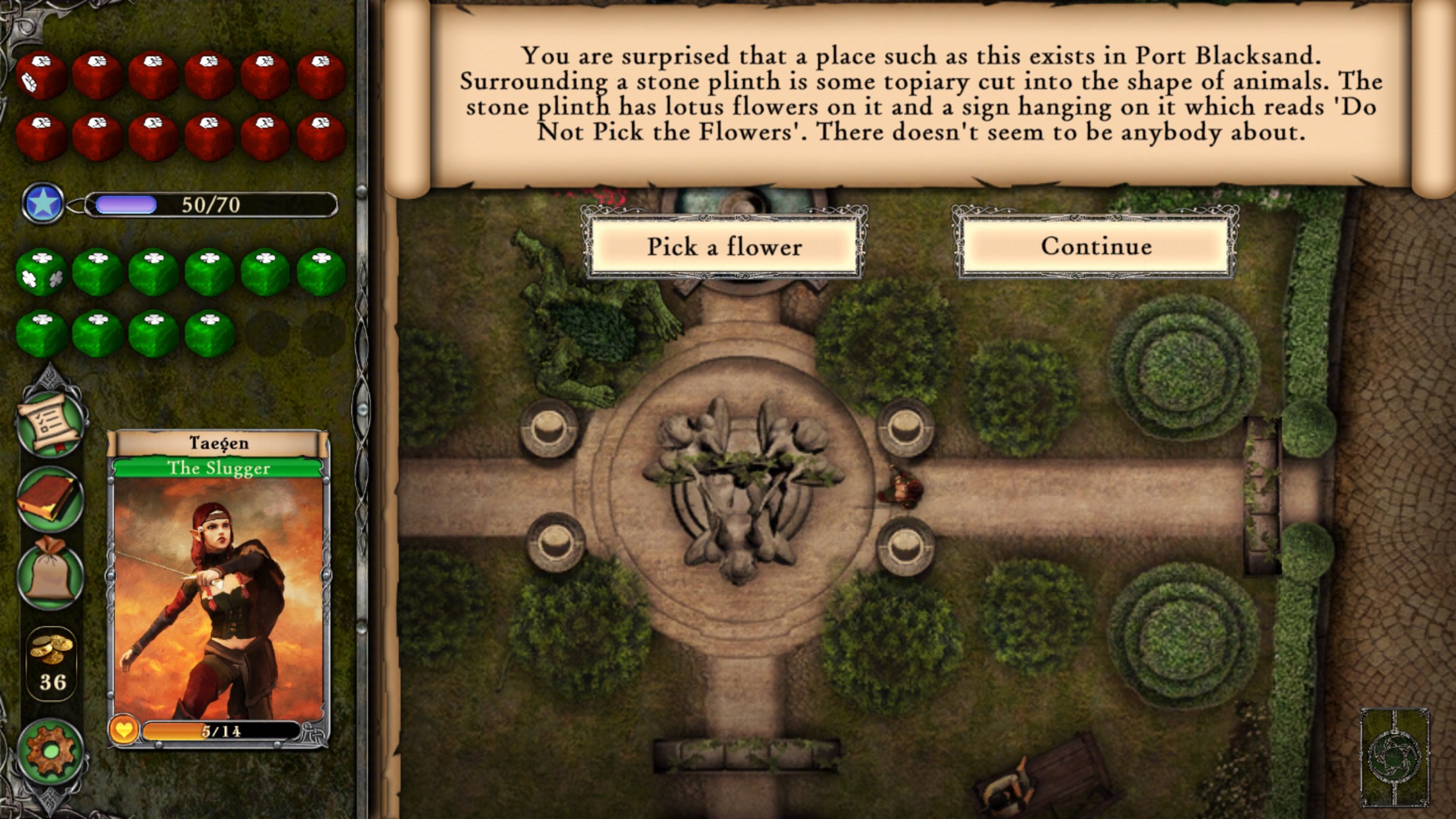 Fighting Fantasy Legends draws its settings and characters from The Warlock of Firetop Mountain, Citadel of Chaos, and City of Thieves. Stitching these stories together isn’t a huge stretch, as they are meant to be taking place in the same world. More interesting is the way that Nomad Games chose to present their game. They’ve clearly taken some cues from previous unorthodox efforts, but in a lot of ways, Fighting Fantasy Legends feels the most faithful to the source of this bunch. You’re presented with frequent choices that sometimes feel unfair in their outcomes. Your trips through each location feel like they’re on rails. You’ll need to roll the dice frequently to pass Skill and Luck Tests.

And yet, there are also all sorts of new aspects that expand significantly on the original works. You’ll now gain experience and level up, increasing the effectiveness of your dice. Certain sections may be on rails, but you’re able to re-enter areas or go elsewhere at your whim. It leans closer to its gamebook roots than its cousins from Tin Man or inkle, but it also feels very much like a tabletop RPG game in the vein of Hero Quest. The outcome is a game that has the speedy pace of a choice-based gamebook combined with the sastisfying depth and fairer difficulty of an RPG. It took all of thirty seconds for me to fall in love with this particular mixture, and hours for me to actually make my way through its traps and adventures. 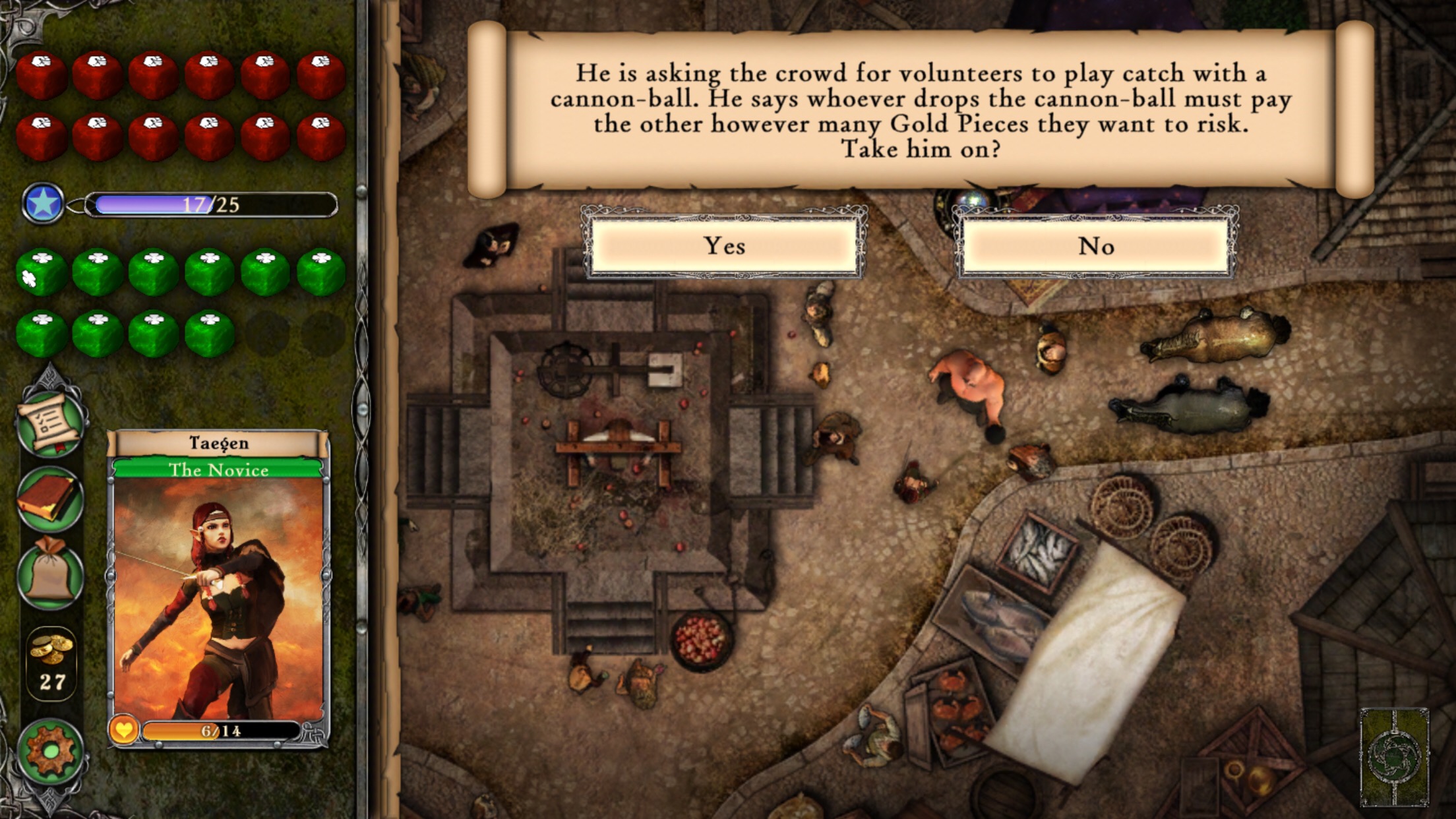 You play from an overhead perspective. There’s an overworld map with a number of locations on it that you can travel to. When you enter a location, your character will automatically move forward along a preset path until they reach a point where you can make a decision. Some of these decisions will require you to roll the dice to determine the outcome, while others simply play out automatically. There are a number of side activities you can engage in that have no serious bearing on your main objectives, but they’ll generally earn you cash or experience points that will surely come in handy. The important thing is to keep an eye on your stamina, because if you run out you’ll have to face some consequences.

Those consequences by default are a lot less severe than Fighting Fantasy veterans might be used to. You’ll get bounced out of your current location with just a single hit point to your name. Worse, your Skill and Luck will take a penalty that you can only remove at certain locations or with special items. The more you die, the worse off your all-important dice will be. Since you use those dice for everything from combat to winning gambling games, you’ll want to keep them in tip-top shape if you can. It’s certainly a downward spiral if you start dying too frequently, but you can mess up a few times with only minor consequences, at least. Veteran players can take advantage of a permadeath option if that all sounds too soft, though. 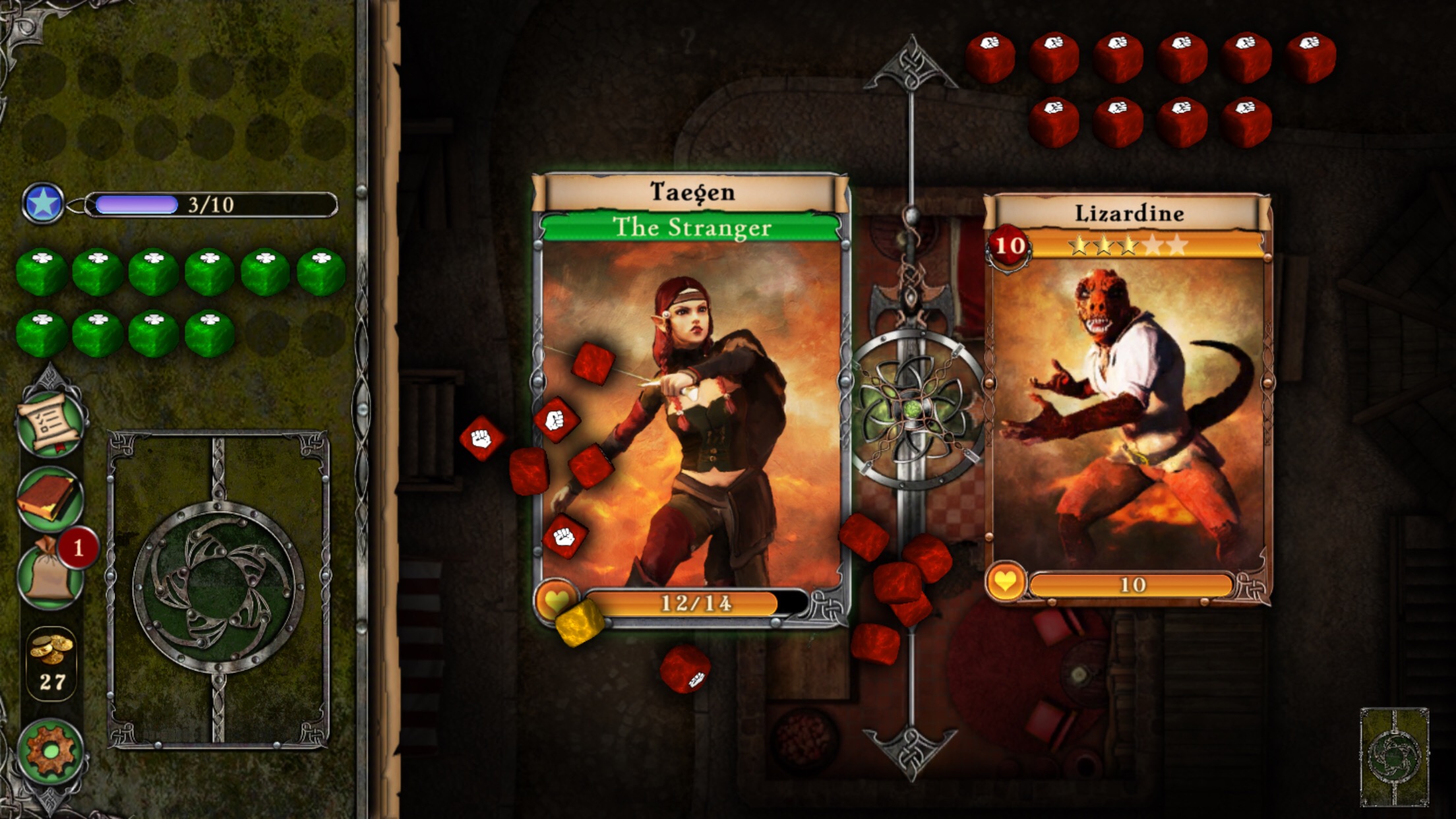 You’ll have a bit of an advantage if you’ve played the original gamebooks. Many of the situations are pulled directly from them, after all. In just as many cases, however, things go a different way. Fighting Fantasy Legends does a great job of seeding in references and characters that anyone familiar with the books will pick up on right away, while at the same time writing the story as though the player hasn’t heard of any of this nonsense. If you play through this game, you’ll gain a pretty decent working knowledge of the main setting and many of the key characters of the early Fighting Fantasy gamebooks. It presents all of this in such a straight-forward way that I feel confident in recommending this game to anyone looking to get a taste of what Fighting Fantasy has to offer.

The one area where Fighting Fantasy Legends comes up a little short in comparison to its peers is in the presentation. Visually, its various elements don’t mesh together well, giving the game a messier look than the admittedly high-bar graphical designs of Sorcery! and The Warlock of Firetop Mountain. Still, it gets the job done. The UI is pretty good outside of the text being a bit on the small side if you’re playing on a phone. The audio fares better overall, with some nice tunes and solid, chunky sound effects that help bring things alive when the visuals can’t quite pull it off. In terms of options, you don’t get much more than some volume and language settings, but there are three difficulty levels for you to challenge yourself with.

I found myself a little blindsided by how much I enjoyed Fighting Fantasy Legends. Nomad’s Talisman port is good, but this game is on another level for them. It’s a treat to get to explore these places and characters from yet another interesting perspective, and I really appreciated the way the mechanics went their own way while still being quite faithful to the basic idea of a gamebook. Long-time fans will have a lot of fun stomping around the familiar places, while newcomers might just find this the most approachable of all of these excellent twists on the Fighting Fantasy brand. It isn’t the flashiest of games, but don’t let it slip by you just because of that. This is a quality adventure that brings out the best of some genuinely classic adventures.