Card Thief ($2.99) is without a doubt one of the best iOS games of the year thus far, as Tinytouchtales managed to take the successful formula from Card Crawl ($4.99) and blend it with a load of peculiar stealth elements. The resulting amalgam was something that felt both familiar and intuitive, but also unlike anything that had been done before on the App Store, and it stood out even amongst the strong offerings of Apple’s indie game showcase at the time. Hot off the tails of Card Thief’s success, the developer has put their time into the next Tinytouchtales project in the form of Miracle Merchant. While we first heard about Miracle Merchant last September, the solitaire-style potion creating title has progressed significantly since this first glimpse, and is now looking for beta testers on our forum thread. 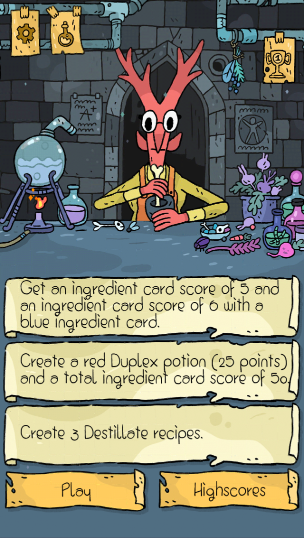 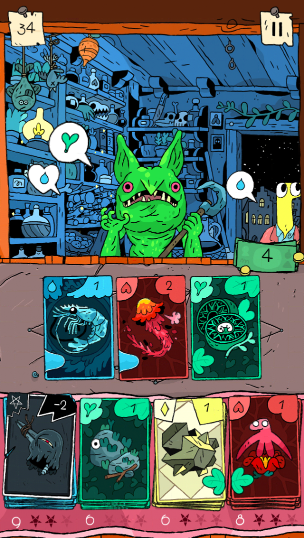 In keeping with Tinytouchtales’ mastery of card-based experiences (the enjoyable turn-based strategy release ENYO (Free) aside), Miracle Merchant deals your character a variety of colorful, hand-illustrated cards that must be combined to create various eccentric potions. Rather than having to slay a nefarious beast, Miracle Merchant tasks you with fulfilling the orders of customers, and will test your card management skills to the limit with ingredients that change between games. While the developer describes Miracle Merchant as ‘one of [their] smaller projects’, I’m as impressed as ever with the vibrant hand-crafted aesthetic of the game and the typically distinctive spin on an age-old classic card game. From a developer with a pedigree as strong as theirs, Miracle Merchant is one to look out for when it launches later this year. However, if you can’t wait, sign up for the beta test now on our forum thread.