The iOS platform has been home to some pretty great space games. Some of them lean more into exploration and trading in the style of Elite or Wing Commander: Privateer. Others are pure shoot-em-ups in the grand tradition of Atari Star Wars and StarFox. Subdivision Infinity ($4.99), the latest release from prolific publisher Crescent Moon, is far closer to the latter type. You’re not on rails, but you are generally operating within a set area for each mission. While there are some side missions involving mining and exploring, the meat of the game is in shooting down enemies before they do the same to you. It’s not the deepest game around, but it knows what it wants to do and does it well.

You play as a cocky young pilot who accidentally stumbles across something big. Oh, it doesn’t seem big at first, but with each subsequent mission, things start to pile up. Worst of all, you’re pretty much on your own for a good chunk of the game, with just a sassy robot to keep you company. I don’t know. The story isn’t anything special, to be honest. The dialogue tries a little too hard half the time, and the rest of the time, it’s just forgettable. Since most of your missions involve pointing yourself at whatever object is marked on your HUD and shooting at it, you don’t really have to pay much attention to the pre-battle banter if you don’t want to. 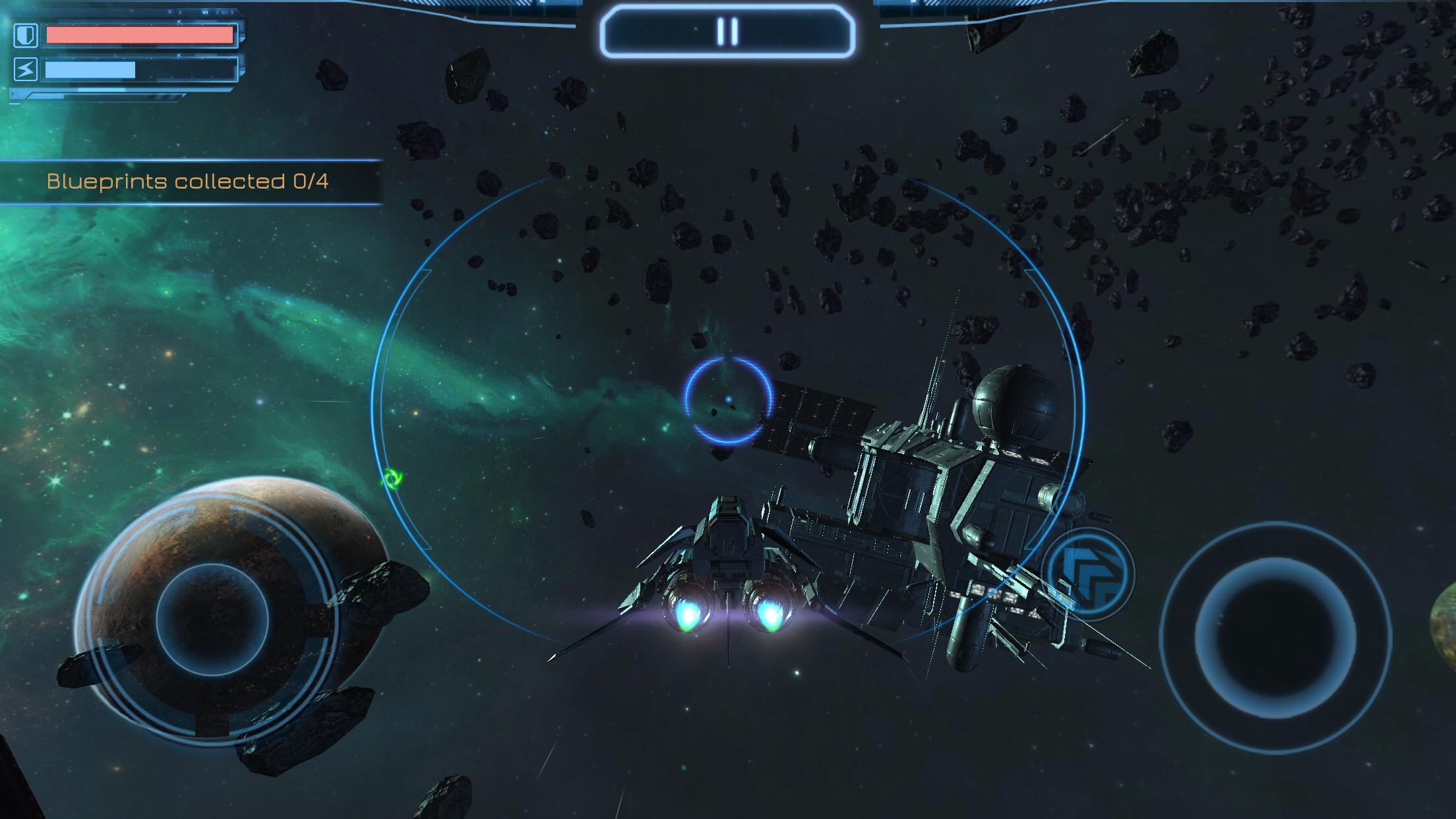 Save your attention for the missions, because the action in Subdivision Infinity can get pretty hot at times. You’re always outnumbered, but basic enemies aren’t much more of a buzzing nuisance as long as you don’t let them get too out of hand. The trick is that they’re often paired with more durable and deadly targets, forcing you to choose between thinning out an increasingly dangerous swarm or keeping your eyes on the big guys to try to knock out your main goals. None of these baddies will sit still for very long, either, so you need to be careful to keep yourself from getting boxed in. Larger enemies will often try to ram you, and that doesn’t usually go well for you.

It’s more or less straight blasting action. You control your ship from a third-person behind-the-ship perspective. You basically have two actions available to you. There’s a button that unleashes a brief speed boost, and another button that shoots. That boost is really all you can do to get out of the way of incoming attacks, and it needs a second or two to recharge after use. Using it well is absolutely essential to victory, but good aim and choosing your targets well is even more important. Boosting is especially vital during boss encounters, as going head-to-head with any of those larger ships is like signing your own death warrant. As a result of this somewhat simple move set, the core mechanics of Subdivision Infinity are like a fast-paced, arcade-style shooter. 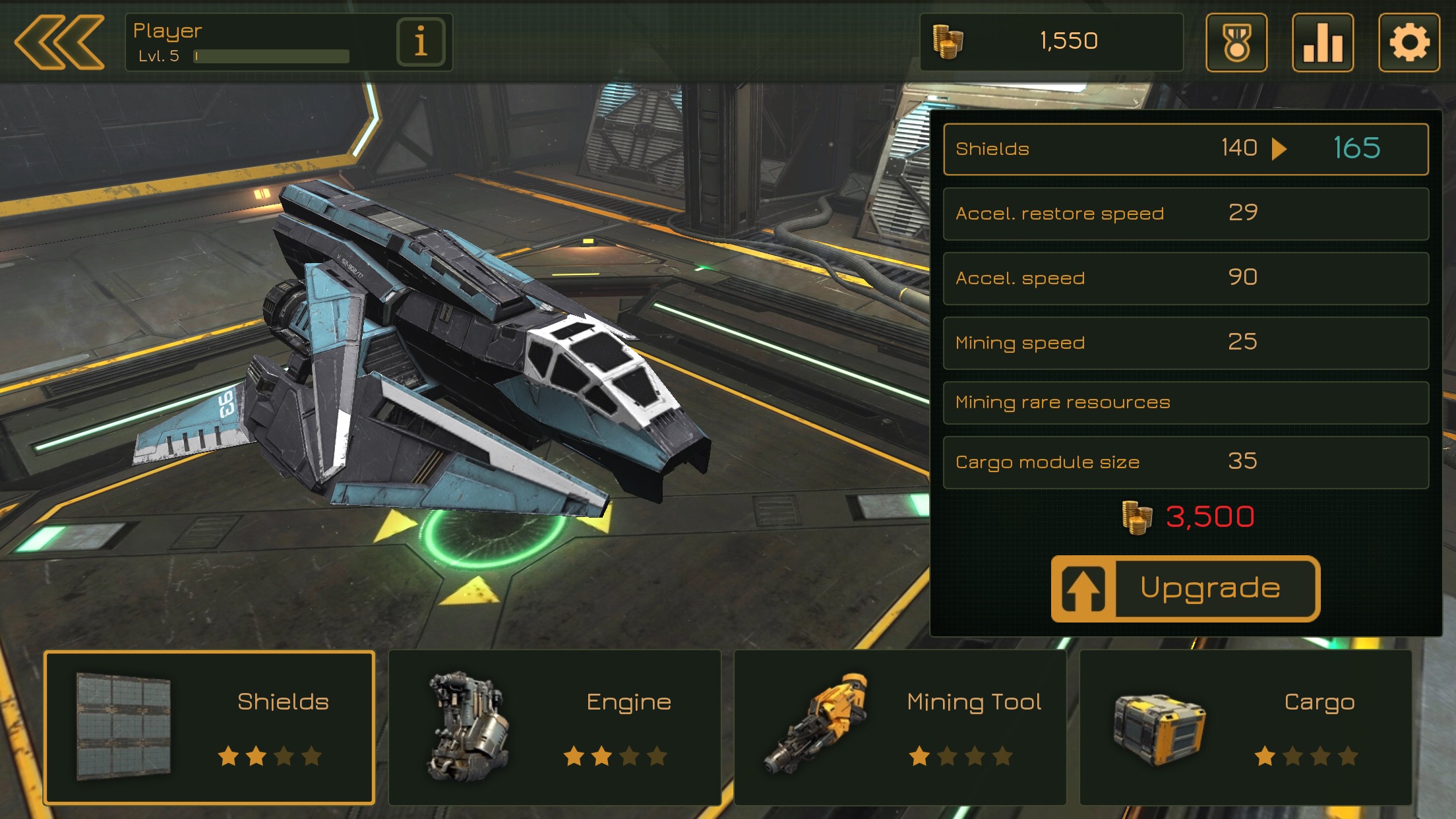 Besides having good reflexes, you’ll also need a good ship if you want to survive. Flying missions, completing achievements, and selling off materials you collect will earn you cash. You can use that money to upgrade your ship, buy new weapons, or even to pick up brand new ships. New ships are gated by experience levels, so even if you find a way to scrounge up a bunch of cash in a hurry, you’ll still need to put in some flight hours before you can jump to a nicer ride. There are also some ships that will require you to gather blueprints and other materials to build. You can get these materials by doing mining and exploration side missions. Honestly, it feels like the cash intake sometimes lags a little behind your needs if you’re just trying to barrel through the main story, but there’s nothing stopping you from doing side missions to farm some up.

Compared to the main campaign, though, the side missions feel pretty half-baked. Mining missions dump you into largely empty areas filled with asteroids you can mine. All you do is get close and tap a button. Once your hold is full, you head back through a portal, and that’s that. Exploration missions have you hunting down ship blueprints that are hidden in various places on each map. They don’t show up on your HUD with a marker, but they do radiate energy that’s fairly easy to spot from the right angle and distance. Once you pick up the second-to-last blueprint on each mission, some enemy ships will attack. Clear them out and grab the last blueprint and that’s that. Then there are Free Hunt missions, where you have a set amount of time to score as many kills as possible while trying to avoid death yourself. In this mode, you’ll keep on respawning as long as there is time remaining. 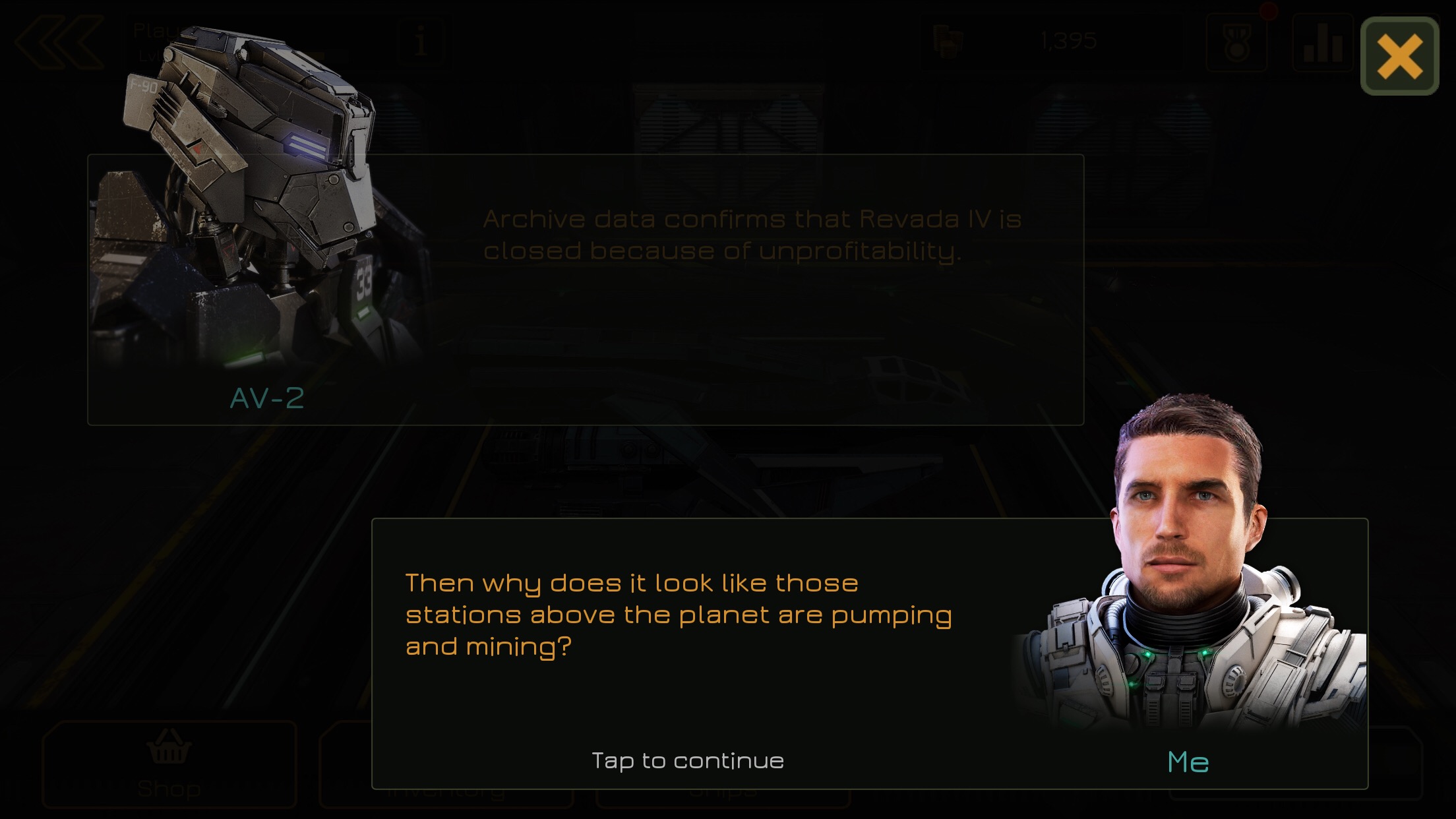 Unfortunately, once you clear the campaign’s 40 missions, these side missions are really all you have left. You can’t repeat previously-cleared story missions, so you can either mess around with the side stuff or start a new game. It’s not a terrible thing, really. The game lasts for about six or so hours, which is an absurd value for the price. It’s just that it’s so fun, particularly once you get your ships upgraded a little, that you can’t help but want to have more to do. It feels like it ends not long after you’ve finally come to grips with the game and learned how to manage its occasional difficulty spikes. I shouldn’t complain too much, I suppose. For this particular style of game, there’s a lot of content here.

As you can probably tell from the screenshots, Subdivision Infinity is quite the looker. The graphics are sharp, detailed, and smooth. There’s a reasonable amount of variety in the areas you’ll visit, too. The audio holds up its end, though it’s not as immediately striking as the visuals. Notably, the game offers support for both MFi-compatible controllers and Apple TV. The latter seems unfortunately rare these days, so if you’re an Apple TV owner who likes to game on it, make sure you pick this one up and show Crescent Moon it’s a feature worth implementing. 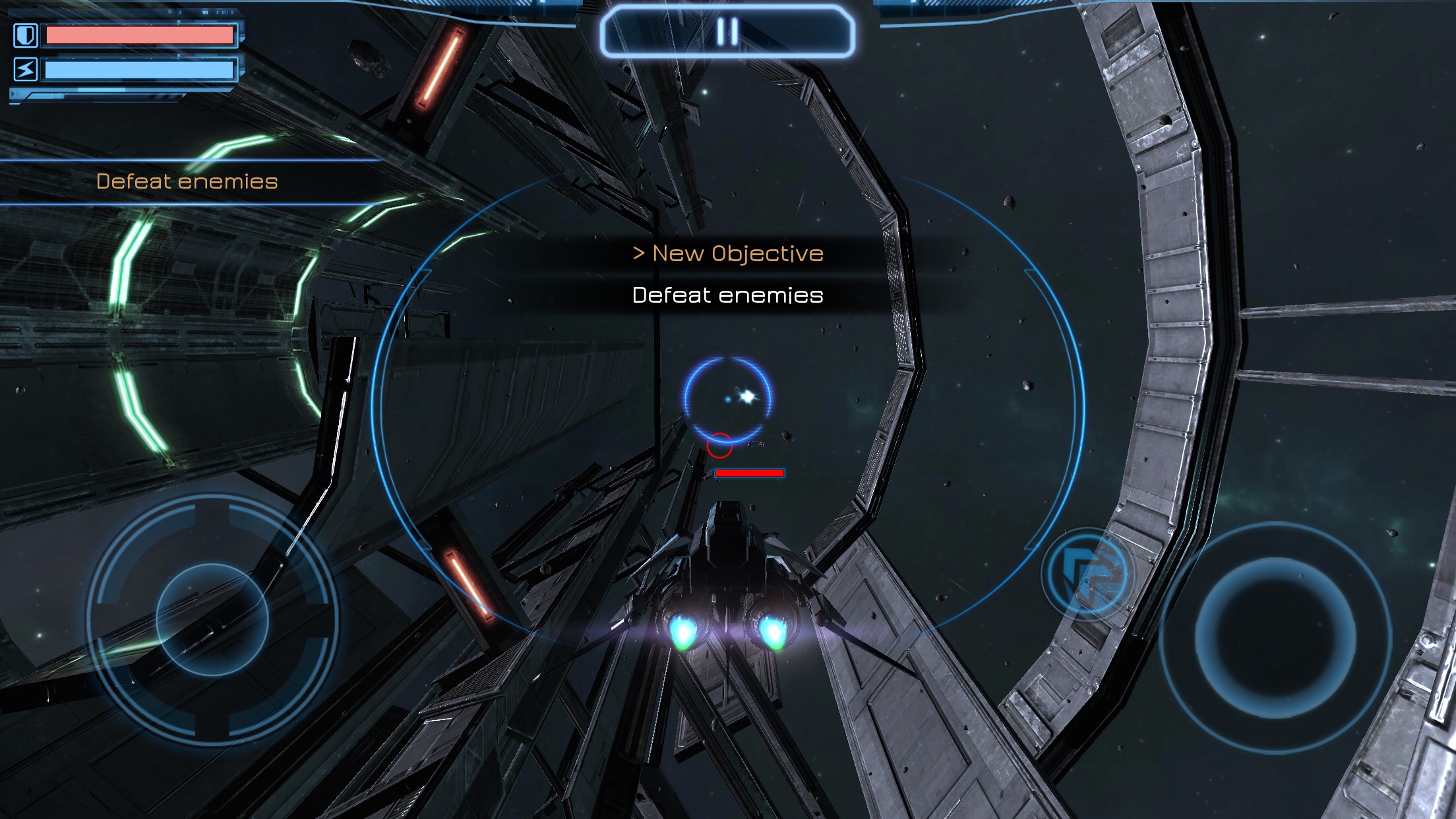 Subdivision Infinity is a slick-looking shooter that offers excellent action and accessible, arcade-style gameplay. It’s a straightforward game that has a few nasty difficulty spikes here and there, and it will definitely test both your skills and patience at times. That said, the pure thrill of zipping around and shooting down a pack of enemies more than balances out those frustrating moments. It isn’t much more than a weekend’s worth of joy, but it’s a weekend well-spent, to be sure.