I’m not entirely sure why, but water park levels in seemingly unrelated video games have some unique intrinsic novelty for me personally. Maybe because they’re less abundant and not as cliche as their regular theme park counterparts; maybe because they’re more creative and less mundane than something such as an airport or shopping mall. Either way, what I’m trying to say is I love a good water park map, and therefore the most recent update or Crash of Cars (Free) is totally up my street (or up my slide, if you will). With a new map featuring the aforementioned aquatic wonderland, as well as multiple new vehicles to eliminate your automotive enemies with, there’s a lot to enjoy in this latest update, which is available to download for any ardent Crash of Cars fans today. 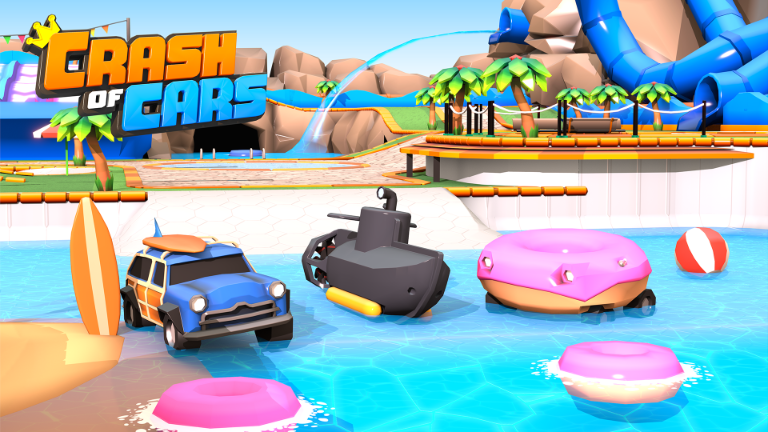 In the 1.1.30 update for Crash of Cars, as well as the water park level, there are a wide range of 11 new cars that can be unlocked by various means. These include an inflatable donut, a surfer van, a submarine, a sand buggy, and to not miss out on the baffling worldwide trend surrounding them, a fidget spinner themed car. I’m not entirely sure what to think of this fidget spinner craze permeating even iOS games such as Crash of Cars, but I’m evidently just a stick in a mud so go wild, kids. Not Doppler have also added two cars that are only unlockable through secret tasks within the game, which should lead to some extra experimentation and variation to the typical blasting and bashing action in Crash of Cars. Some other minor additions based on fan feedback are also welcome, and should make Crash of Cars one of the more interesting online titles to kill those long summer months. Download the 1.1.30 update for Crash of Cars now, and let us know your take on these new additions on our forum thread.