Early this morning, Square Enix unveiled to the world the latest and greatest thing they’ve been working on in arena world of mobile gaming. If you’re thinking, “Oh, neat, you mean they updated all their old Final Fantasy ports to 64 bit?" Well, that’d be nice, but today’s news is in the form of the somewhat confusing release of Arkanoid vs Space Invaders ($4.99), a mash-up, which I suppose totally makes sense in a world where Adam Sandler’s Pixels can rake in just shy of $245 million dollars at the box office. As the title indicates, the Arkanoid and Space Invaders universes have been duct taped together in a way that actually works quite well and, despite what I thought initially, makes a strange amount of sense.

Stepping back a bit, assuming you’ve spent the last few decades living on Mars with your eyes closed and your fingers in your ears, Arkanoid is almost as classic as it gets when it comes to the brick breaker formula we know today. Originally released as an arcade game in the mid-80’s, Arkanoid added loads of depth on top of Atari’s Breakout via highly varied level layouts, power-ups, and just generally looking better thanks to more powerful arcade hardware. I have no idea how you’d ever know this unless you were a retro video game trivia nut, but Arkanoid is actually set in space, and you’re not moving a paddle back and forth, you’re piloting a space ship named the “Vaus." 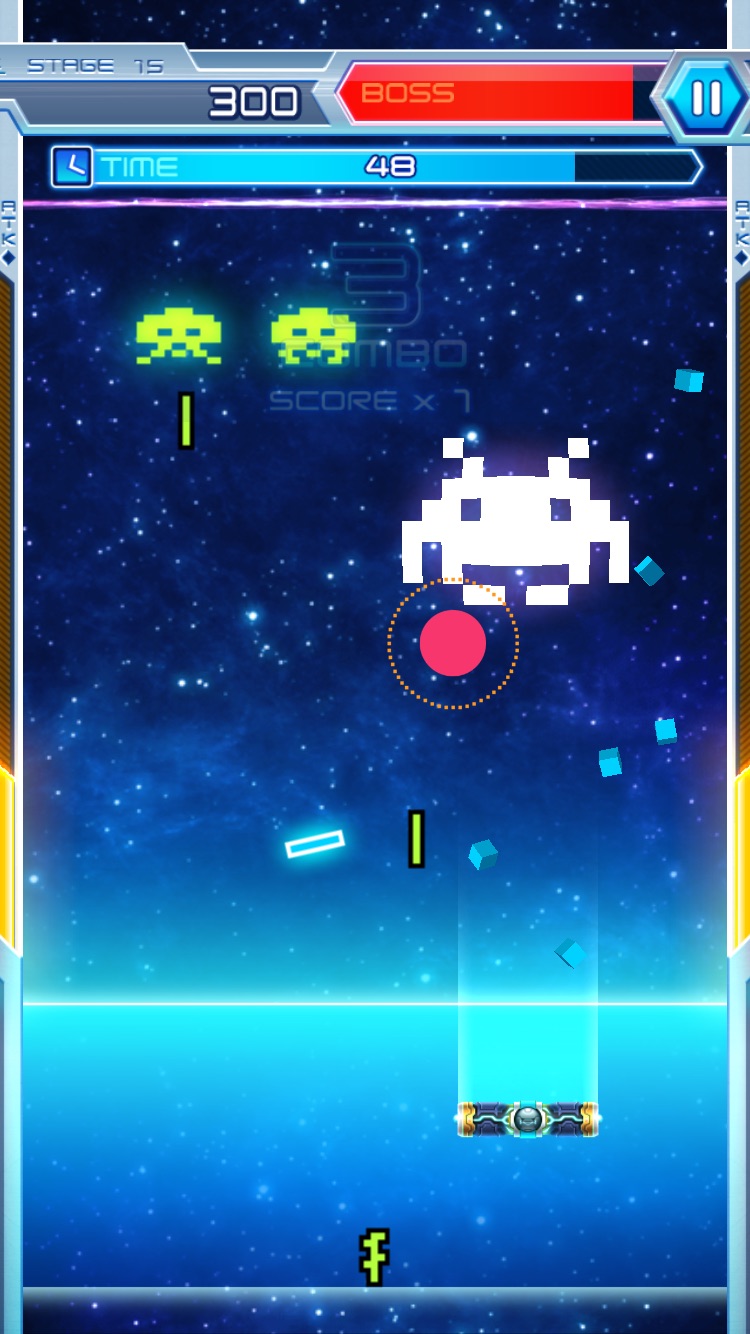 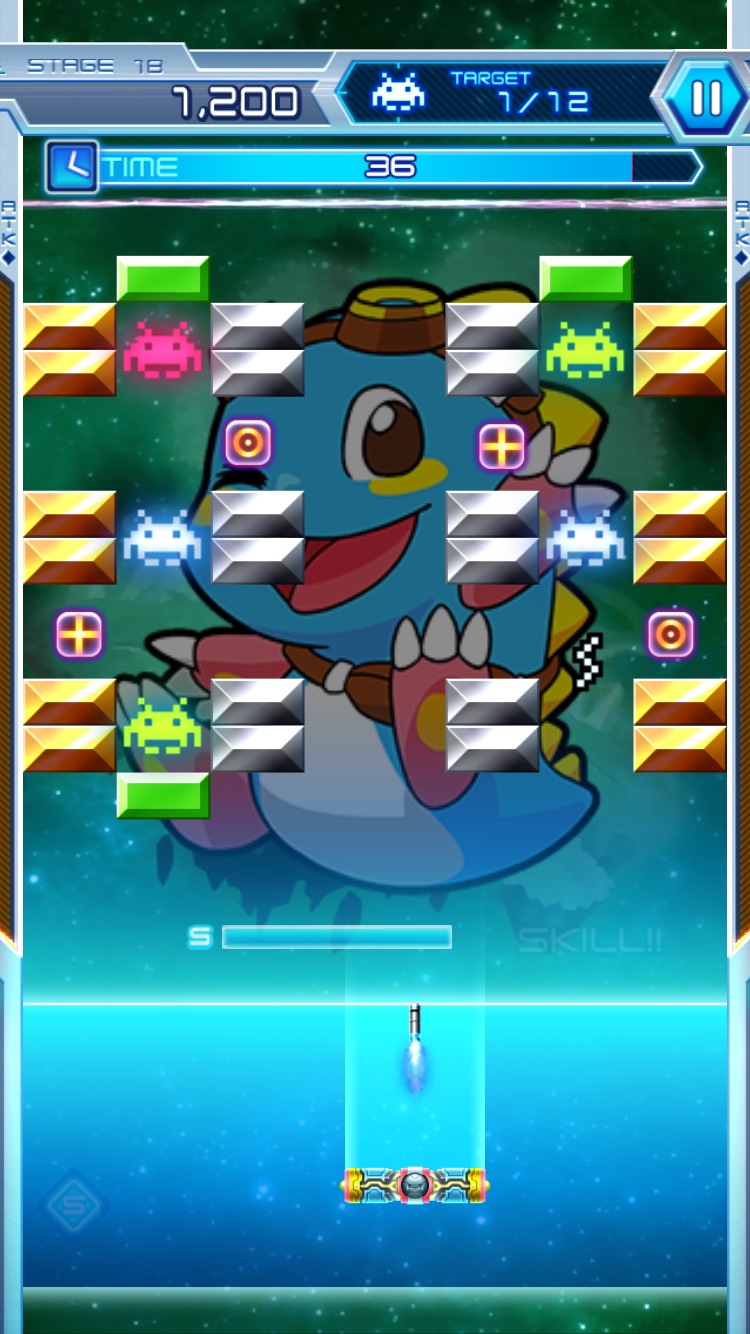 Similarly, Space Inavders was released in the late 70’s, and (somewhat obviously) also was set in space with you shooting down waves of increasingly difficult aliens. I guess the release of Arkanoid vs Space Invaders solidifies once and for all what Atari fanfic authors (That’s a thing, right?) have been suggesting in Arkanoid and Space Invaders cross fanfiction: The two exist inside of the same universe and said cross fanfic was totally canon all along.

Gameplay is what you’d imagine it to be, you slide your finger around the bottom of your iOS device to control your paddle, err, I mean, your space ship. Instead of ducking behind Space Invader barricades and weaving between bullets, you’re deflecting them back at the invaders. The Arkanoid side of thing continues to rear its head through bricks that serve as obstacles, often protecting the invaders, and a host of power-ups which drop from both downed invaders and blocks. You don’t need to return all enemy fire, but it’s in your best interest to as each level is timed and once you get outside of the early tutorial-ish levels, things get incredibly frantic. 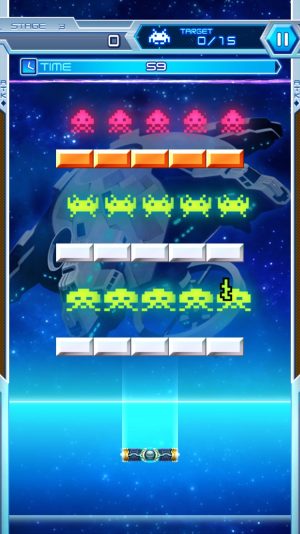 There’s a somewhat surprising strategic component to the game as well, as different invaders have different rates of fire and projectile types- So, it’s in your best interest to try to form a plan to keep the more powerful invaders up to use their incoming attacks to blast back at the weaker invaders that fire slower. Particularly deeper in the game when time becomes a real issue, this kill order becomes more and more important, as the slower attacks simply will not provide enough ammo for you to fire back and kill all the invaders before time is up.

The game continues to throw wrenches your way with the addition of Arkanoid-style blocks that take multiple hits to clear (or in the case of gold blocks, can’t be cleared at all). You’re not entirely dependent on shot deflection, however. By deflecting shots you’ll slowly fill up an attack meter found on both sides of the screen. Once this is full, you’re able to do an aimed charged shot that will pierce through multiple enemies and pause time for the few seconds it takes for your attack meter to then deplete.

Other interesting wrinkles in the formula include the ability to ram your paddle forward by swiping up quickly at an incoming shot to have it shoot straight ahead, and as you get deeper into the game you’ll have the opportunity to unlock additional characters, each with have their own special abilities. For instance, playing as Bubble Bobble’s Bub introduces “S" power-ups which when picked up will cause you to shoot missiles for a few seconds. Other characters have similar abilities with minor differences on how their special powers behave. Oh, and there’s pre-level “booster" power-ups you can buy with coins that do things like make your paddle wider and more. (These seem incredibly optional.) 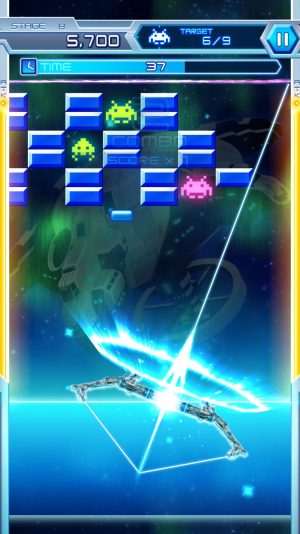 Arkanoid vs Space Invaders has a ton of content, between 150 levels to play through, a bunch of boss battles (which are pretty cool), 40 characters to unlock, and a hard mode that gets unlocked once you beat a set of levels. Hard mode drastically decreases the time limit on each level and introduces power-downs you need to avoid. In normal mode, you can pick up power-ups that increase the time you have, in hard mode, you need to avoid drops that decrease the timer. The amount of time you have is often halved too, which is pretty nuts as a lot of the levels on normal can be pretty difficult as is.

I think how much I find myself enjoying Arkanoid vs Space Invaders has a lot to do with something we’ve been discussing quite a bit on the podcast recently: Back in the day, we’d see so many similar games of the same genres over and over. Runners, brick-breakers, and other “classic" genres were getting really old largely due to the sheer quantity of games getting released. These days? A super-solid brick breaker with an interesting twist and no freemium shenanigans is an incredibly welcome addition to the App Store. One other thing- Be sure to play this game with sound on, or headphones in. The soundtrack is pretty awesome and is actually available for download on iTunes, although it is sort of amusing that it’s over twice as expensive as the game which (seems to) include it all.

Really, the only bad thing I have to say about Arkanoid vs Space Invaders is the initial download experience really sucks. You buy it on the App Store, go through the whole download process, then on the first launch you go through an agonizingly slow additional download before you can do anything (and my internet connection at home is very fast). This always leaves a bad taste in my mouth, as I’ll never understand why developers don’t build their games so at minimum the first portion is playable while the rest downloads in the background. If I hadn’t paid (as of this writing) four bucks for this game and it hit me with an on-launch download that crawled, I’d have just deleted it. At the end of the day, it’s not a huge deal, just be aware that if you want to play this game, prepare to be connected to WiFi for quite a while while everything finishes downloading. 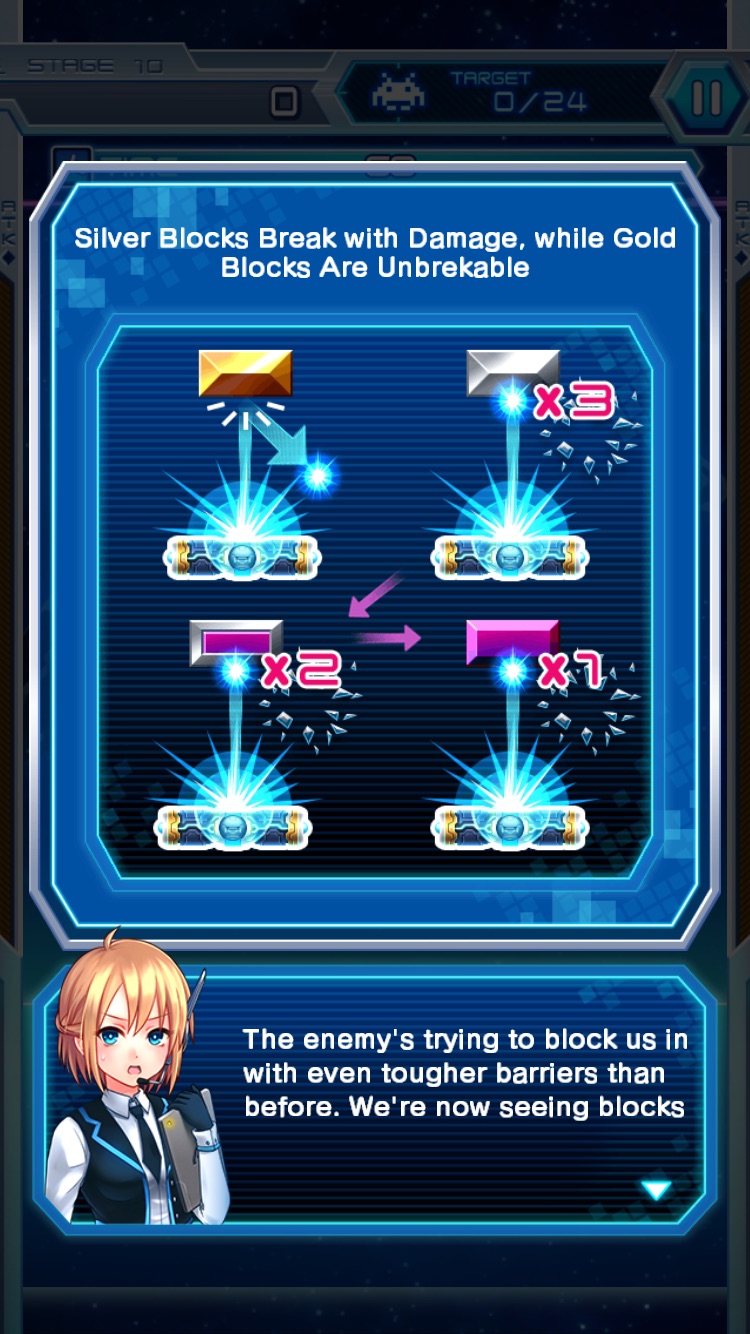 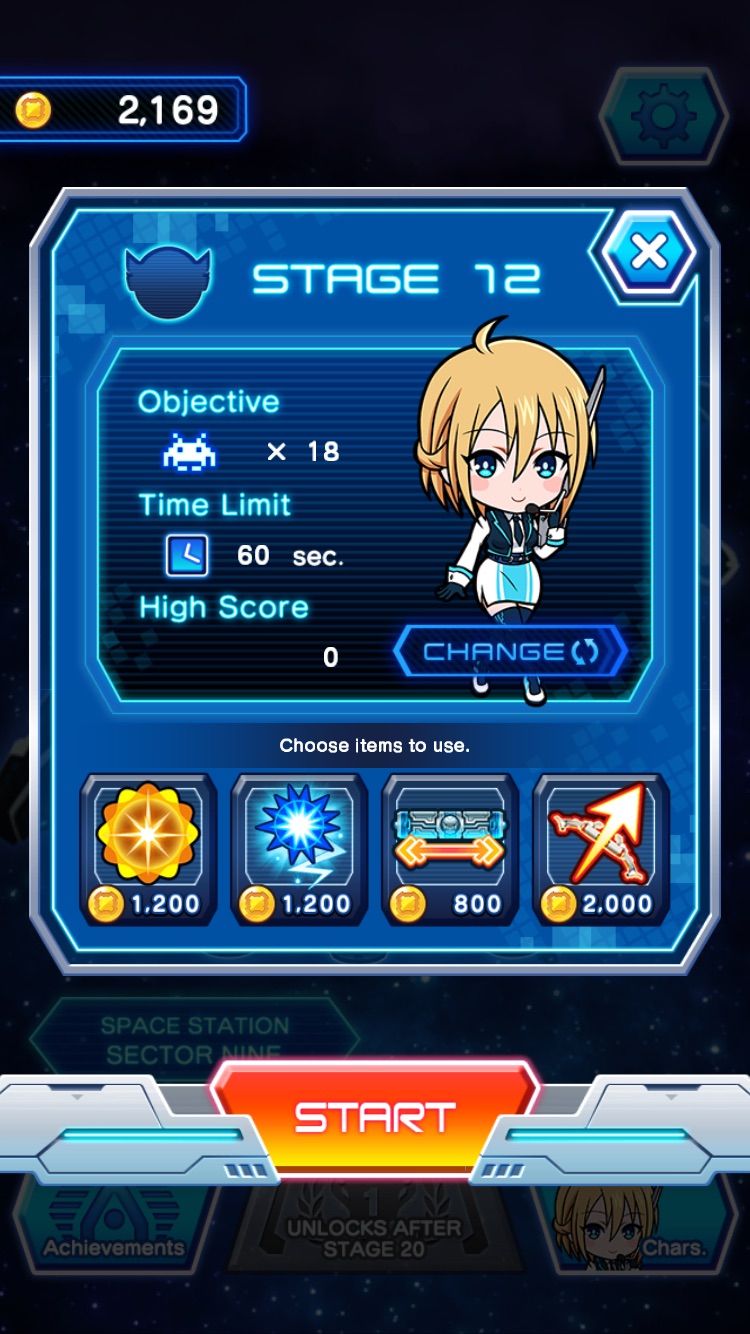 If you’ve been wondering where the heck all the premium games have gone and just love hating on free to play, it’s really worth putting your money where your mouth is and picking up this game (particularly during its launch sale). Squeenix could’ve very easily released Arkanoid vs Space Invaders as a freemium game, loaded with ads and coins to buy. They likely would’ve made tons more money too. Arkanoid vs Space Invaders is a fantastic refresher of what arcade style iOS games used to be like it, and I’m more than happy to celebrate that.