Like anyone who has been playing games for any length of time, I’ve seen so many endings that they barely even register in my memory anymore. But I distinctly remember the Saturday one summer in high school when I finally finished Super Ghouls ‘n Ghosts. My friend owned the game, and I had dabbled with the game here and there over the couple of years leading up to that moment thanks to the occasional loan. It was something I had originally written off as being too frustrating to care about, but I was staying at my buddy’s house that weekend and he was out for the day. Lacking other options, I sat down and played through the whole thing (twice). It’s an incredibly difficult game even for its era, but there’s a certain rhythm to it that will carry you through once you learn it. And to be perfectly honest, it’s probably the easiest game in the series that started with 1985’s Ghosts ‘n Goblins. 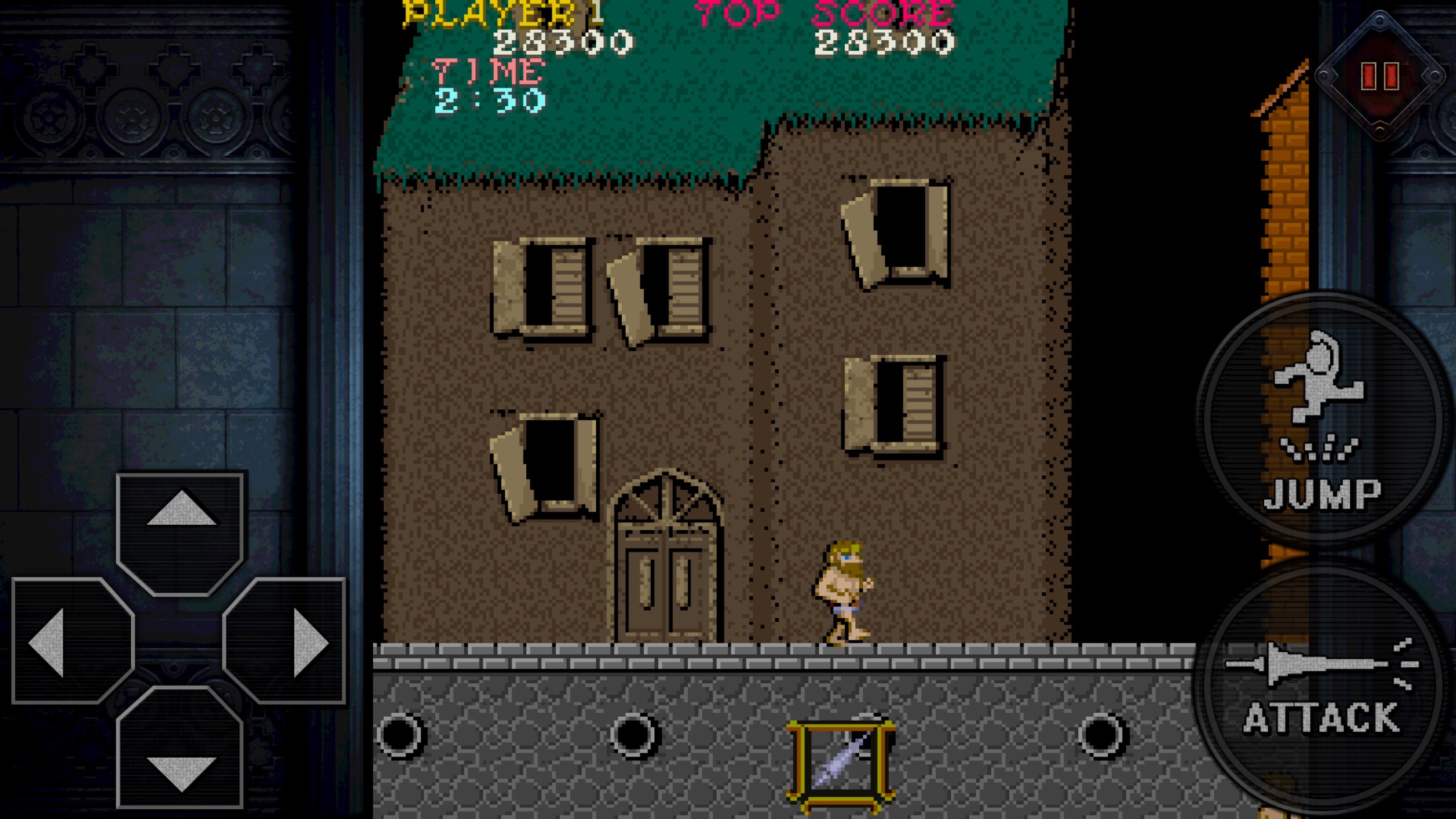 No, for my money, the hardest game in this series is that very first game, Ghosts ‘n Goblins. It’s pretty much the ultimate example of how cruel an arcade game could be in its pursuit of more of the player’s coins. Packed to the brim with nasty tricks, tough enemies, and a twist in its ending that has to be experienced to really grasp the weight of, Ghosts ‘n Goblins was so hard that you’d have an easier time finding decent Mexican food in The Pas than you would finding someone who could beat the game in the pre-save states era. Yet for how mean-spirited it could be, there was something about Ghosts ‘n Goblins that just clicked. Each stupid death only made you want to try again so that you wouldn’t have the indignity of “death by random purple bird" on your permanent record. Even if you never beat it, every inch of ground claimed was incredibly satisfying. Until the ending sends you back for another pass, anyway. That was just plain garbage.

The reason I’m stressing the game’s difficulty so much is that I’m not sure this was a wise choice for a mobile conversion. Ghosts ‘n Goblins is already incredibly tough with buttons and a stick/directional pad. Moving to touch controls adds another layer of frustration to Ghosts ‘n Goblins Mobile ($1.99) that pushes the game into the realm of the near-impossible. Seemingly cognizant of that reality, Capcom has tried to make things a little easier on players with a level select and a casual mode that relieves some of the burden. I would trade them in a heartbeat for MFi controller support and save states. Because the thing is, this is actually a really great port of the game from a technical standpoint. It looks, sounds, and moves more or less the way it should, and that’s great. If you think you can brave a touch-controlled Ghosts ‘n Goblins, you won’t be unhappy with the quality of the port here. 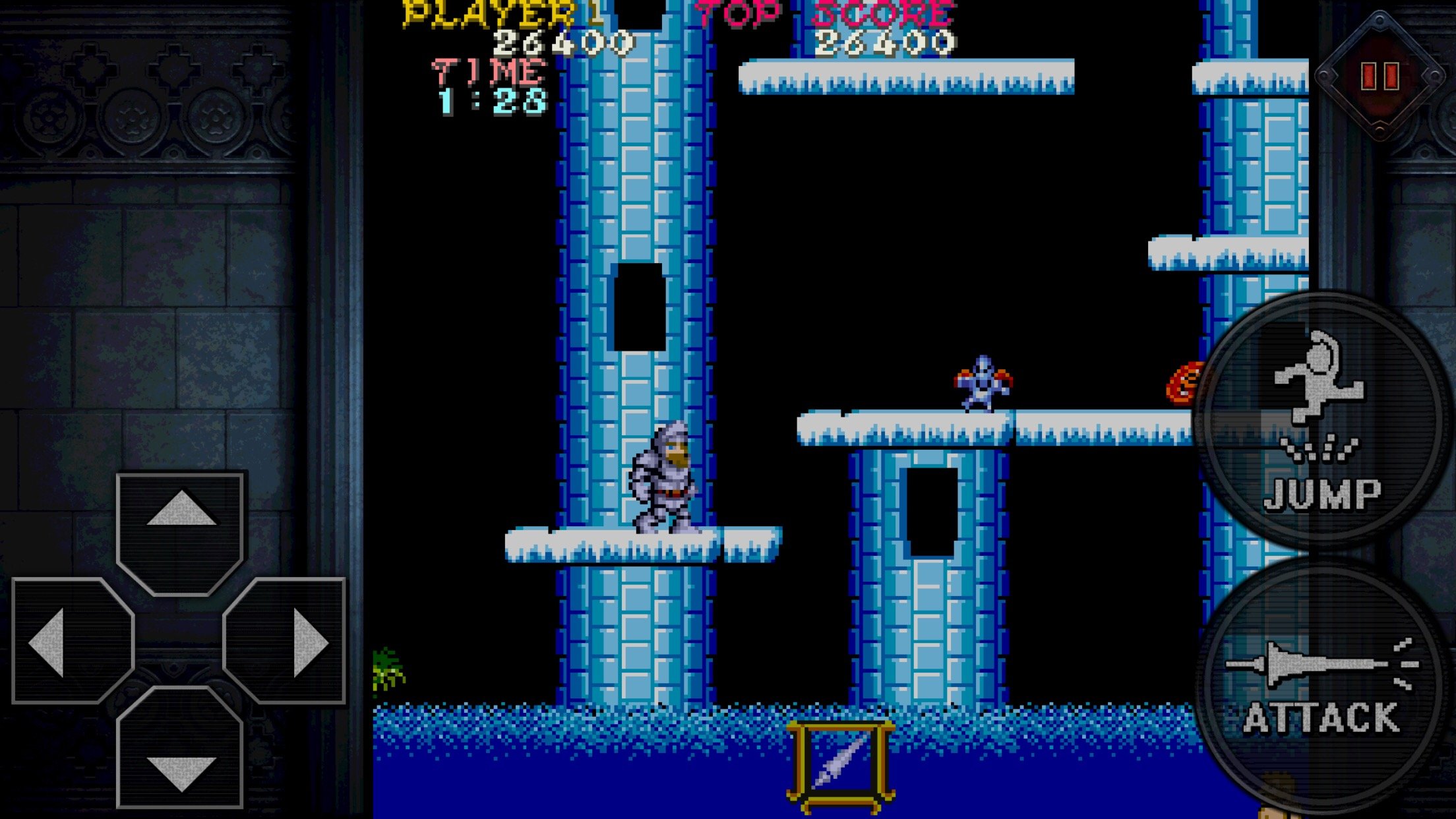 The wrapper around that port isn’t perfect, though. You get four different control options, which is good even if three of the four are awful. But every single time you start a new game, if you aren’t planning on using the default control scheme, you’ll have to go into the options to change it again. There are no options for resizing or even moving the virtual buttons, a feature that would be really handy. As mentioned, there is no support for MFi controllers included, and rather than allowing save states as they do in most re-releases of this game, they’ve added a feature that lets you start a new game from any of the levels you’ve already reached. Leaderboards and achievements are done through a Google Account rather than Game Center, so if you want to make use of them, you’re going to have to make or sign into Google.

As with the recent 1942 Mobile ($1.99), there are two modes of play here. If you want the original game in all of its glory, there’s a classic mode that gives you that. The new casual mode cuts back considerably on the number of enemies and allows you to double-jump, a feature that wasn’t originally added to the series until Super Ghouls ‘n Ghosts. That makes certain sections of the game a lot easier, and is something of an inspired addition even if it does break the game’s balance at times. One other nice extra is the ability to switch between any weapons you’ve picked up on your current run. Accidentally grabbed the torch when only the lance will do? No problem, you can go into the menu and change back if you want. These are good, sensible things to add to the game to make it more playable without changing its fundamental values. 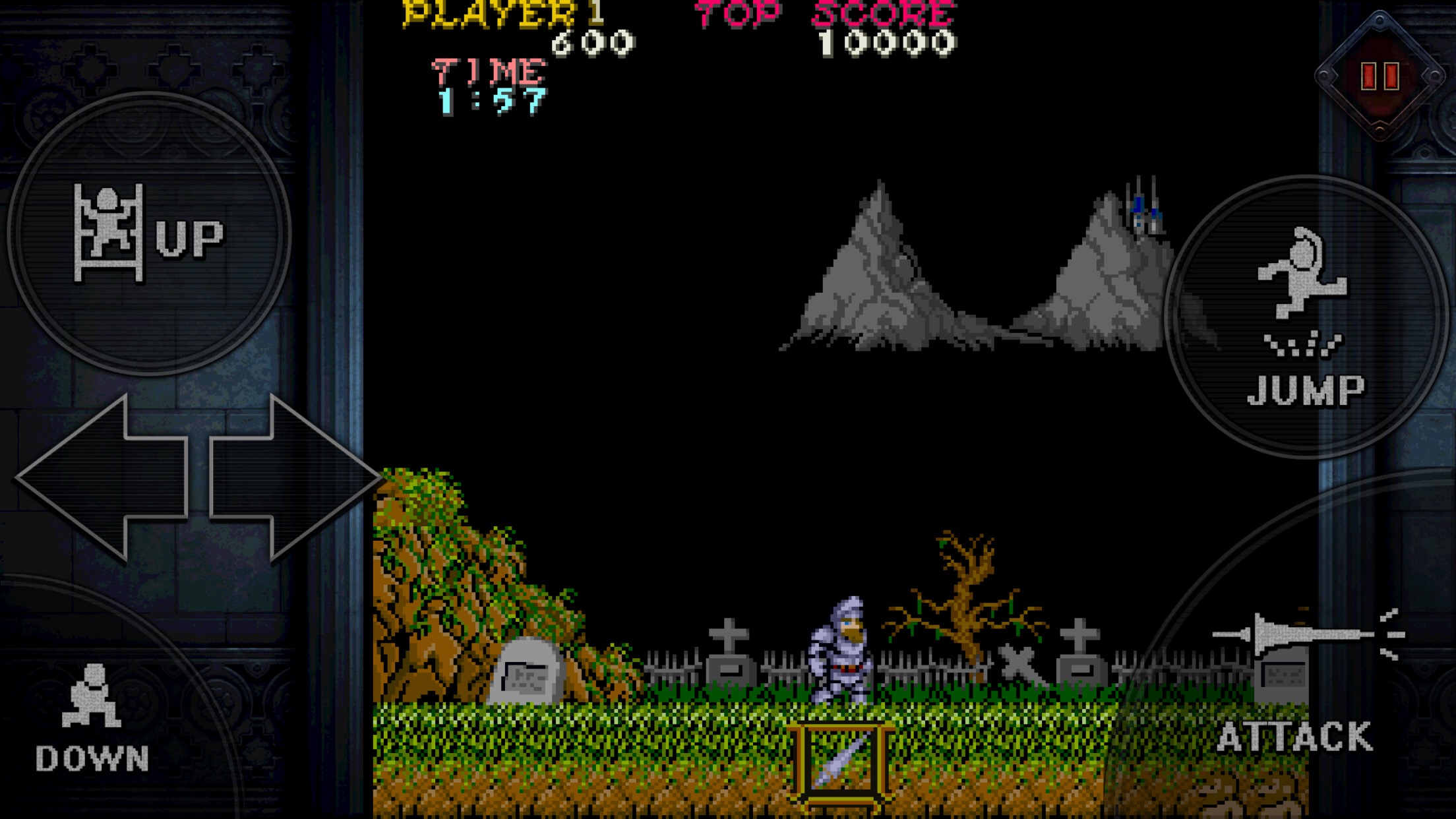 But the thing is, they only address some of the game’s tough spots. There are plenty of cases where it’s not about having the wrong weapon, or too many enemies, or even tricky platforming. Sometimes it’s about being able to turn, duck, and fire your weapon with split-second accuracy, and that’s where the touch controls really start to bungle things. Reliable tricks that are absolutely necessary for surviving things like Red Devils and the boss encounters just don’t work as well or as quickly as you need them to at times. On top of that, the buttons themselves tend to obscure deadly threats, giving you less time to address them. In a game that requires cat-like reflexes to survive, having incoming attacks even partially hidden from view is a very bad thing. I feel like the game in this form is genuinely too hard to properly enjoy beyond the first few levels.

Ghosts ‘n Goblins Mobile is a technically-sound port of a good, classic game that really isn’t well-suited for touch-based controls. There are some quirks with the options that are likely to be addressed in a future update, but the biggest problem with the game is that it probably shouldn’t have been picked as a candidate for a mobile port to begin with. It’s already a severely difficult game, and adding even a little frustration on top makes it too much. That said, for the price of it, it’s hard to tell anyone not to buy it if they’re interested, but just be aware that you’re probably not going to get too far unless you’re incredibly stubborn or a virtuoso with virtual controls.