Folks, we’re in the middle of something of a feline renaissance of late, what with the recent release of an amazing kitten rhythm title and the future release of an RPG that lets you play as a cat (among other games). Meanwhile, The Big Journey  ($1.99) from Catfishbox and Armor Games is the latest platformer starring a cast of cuddly fat cats.Thankfully, The Big Journey does justice to our cat overlords with an excellent soundtrack, gorgeous visuals and gameplay that offers something for every type of gamer. 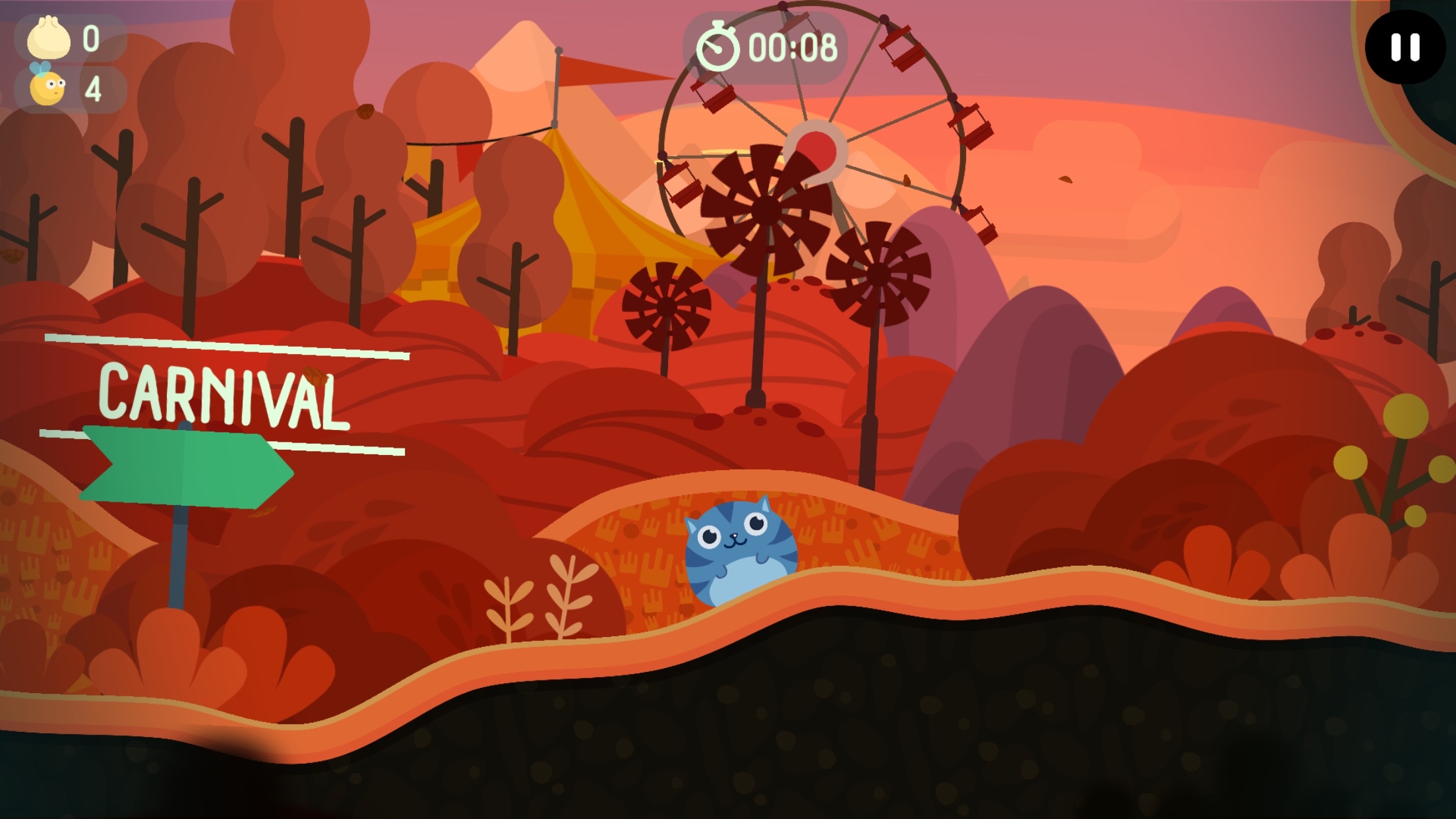 Taking after previous platforms of high regard such as Rolando and Leo’s Fortune ($4.99), The Big Journey is a title that focuses on collection, exploration, avoidance and platforming skills with a small amount of combat thrown into the mix. You play as Mr. Whiskers, a very round kitty that goes on a journey looking for his best friend Mr. Choo, who just happens to make the best dumplings around. Along the way Mr. Whiskers will roll through forests, deserts and gorgeous nighttime backdrops searching for dumplings and his beloved friend.

As far as gameplay is concerned The Big Journey nails that careful balance for platformers in their attempt to be universally appealing. There aren’t any lives, so novice players can try as much as they like to pass each level. Meanwhile, gamers looking for a challenge are offered a three-star system that has players collecting items and completing the level in a certain amount of time to earn them. Finally, for completionists each level has plenty of secret passageways and animal companions to discover (along with new cats to play as). The beauty of The Big Journey is that each element I’ve discussed is pretty segmented from the others, meaning that it’s a perfect game for all types of folks. 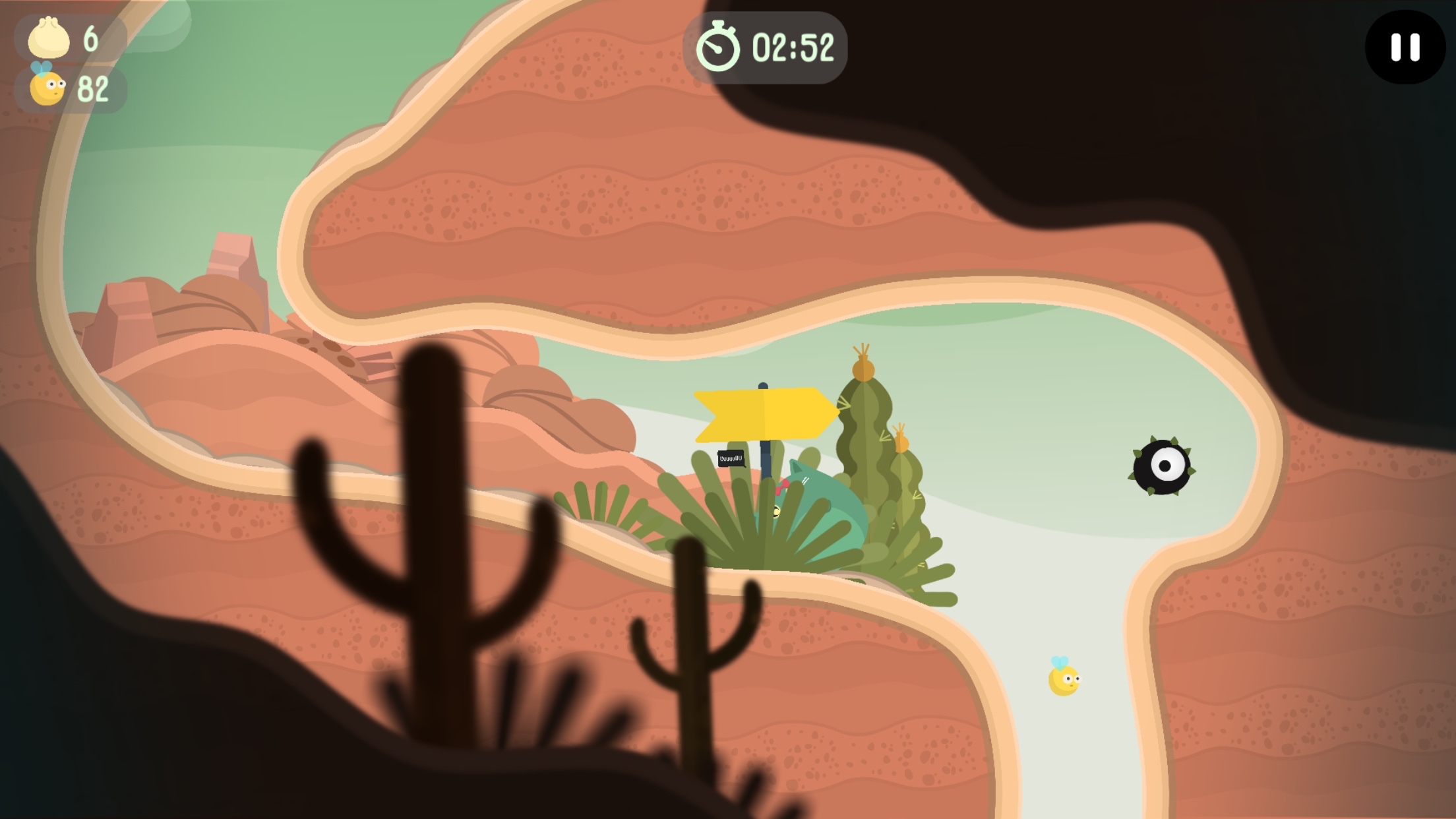 The Rolando appeal I mentioned earlier has to do with the control scheme. Being a rather rotund kitty, the preferred manner of control for Mr. Whiskers is the accelerometer. In this regard, the controls are well-implemented, with the only issue I encountered being some difficulty nailing the really complicated jumps (as it should be, I suppose). There is a non-accelerometer based control scheme, for folks that aren’t into moving around their phone to control your hero, but it wasn’t my preferred control method for the game.

The Big Journey is very fun to play, but the game is truly a treat when it comes to its visual style and soundtrack. Regarding the visuals, I’m simply in love. The Big Journey has vibrant colors, environments that simply pop out and a backdrop that isn’t too distracting but adds so much personality to each of the game’s regions. Accompanying the visuals is a very well-done soundtrack that does an excellent job setting the mood for each land you visit. There are both catchy up-beat tunes and soothing introspective (again a good sign the developers know exactly how to match a song to their world). If you’re anything like me, you’ll find yourself humming them after your play session. To top it all off, I also encountered no technical issues from the game, which is important in a platformer.

Platformers on iOS need to have something very interesting about them in order to get noticed. To make matters more difficult, they also need to execute the basics without issue. The Big Journey succeeds on all these fronts with a gorgeous adventure about a colorful kitty. I had a great time leading Mr. Whiskers on his journey and I’m sure you will too.