I’ve known about Kingdom: New Lands ($4.99) for quite some time, as the game originally started as a Flash game in 2013 before being fleshed out and released for desktop in the fall of 2015. It always seemed like a natural fit for mobile, and during GDC last year we were shown an early demo of Kingdom running on iOS, and it looked really promising. It was supposed to launch on iOS later that year, but the developers had to turn their attention to a massive expansion to the original game called New Lands which they launched on desktop alongside an Xbox One version of the game last August. Well, better late than never as Kingdom: New Lands has finally arrived on iOS with all that extra content in tow. 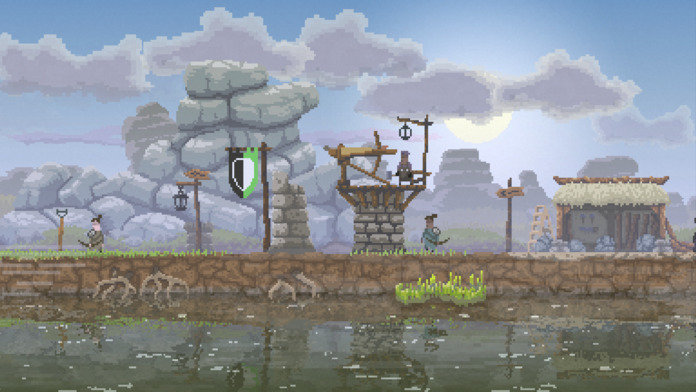 Like I said, I’ve known about Kingdom for a long time, but I didn’t really KNOW know what the game was all about until this iOS release. Not having played the game on other platforms I only really knew what I read and what I saw in trailers. Kingdom appeared to be a side-view city-building and exploration game with minor tower defense elements all wrapped up in stunning pixel art. As far as I could tell Kingdom was just a nice looking game about riding your horse back and forth through cool environments, and that’s definitely true, but after putting time into the iOS version I now realize there is so, SO much more to this game than there appears on the surface.

This is where it gets tricky to talk too much about Kingdom: New Lands. It is most definitely a better experience going into it blind and figuring all its little details out as you go. It’s a very hard game, and it’s designed so that when you fail you basically start all over. Call it permadeath or roguelike or whatever other overused term you want, but the core of Kingdom is failing and learning from your mistakes so that you can inch a bit farther your next time around. Once you get a handle on things games can last for quite a long time, but the game saves often enough that it still fits into chunks well-suited for mobile play and it totally has that “one more go" element that makes for great mobile games.

Again, I don’t want to go into too many specifics about Kingdom so as not to spoil anything. If you really must know there are certainly plenty of FAQs or reviews out there for the game on other platforms that’ll tell you plenty. For me, though, the fun has been in being surprised and delighted by each new element the game reveals to me as its layers peel back like an onion. I loved the look of Kingdom: New Lands and was perfectly OK with it being a horse-riding simulator thing, but the fact that it’s far deeper than I could have imagined has easily pushed this into my Best of 2017 list. Ten bucks may be pricey for the mobile world but I’m glad to see premium games like this trying to buck the race to the bottom trend of the App Store, and after seeing how deep this game really is the ten dollar price tag feels like a steal.

It won’t be for everybody, but most everyone in our forums have been enjoying the game tremendously, and if you enjoy deceptively deep and extremely challenging games then I can easily recommend Kingdom: New Lands on iOS as it feels perfectly at home as a mobile game.