It took a while, but it feels like the changes in the iOS market over the last few years are finally catching up to Kemco. Releases are more sporadic and increasingly reliant on one obviously overworked developer. Their games are now released in free and premium versions, both of which are typically packed with extra monetization techniques. If that’s not bad enough, it feels like monetization techniques are almost the only aspects that these games are changing or improving. I wish I could say Fairy Elements (Free) bucks that trend, but that would be fibbing. At its best, this is no better than the average EXE-Create game published by Kemco. At its worst, it feels cheap and hungry. The most notable thing about it is its soundtrack, where Kemco has made the bold move of pulling in someone with some name value. 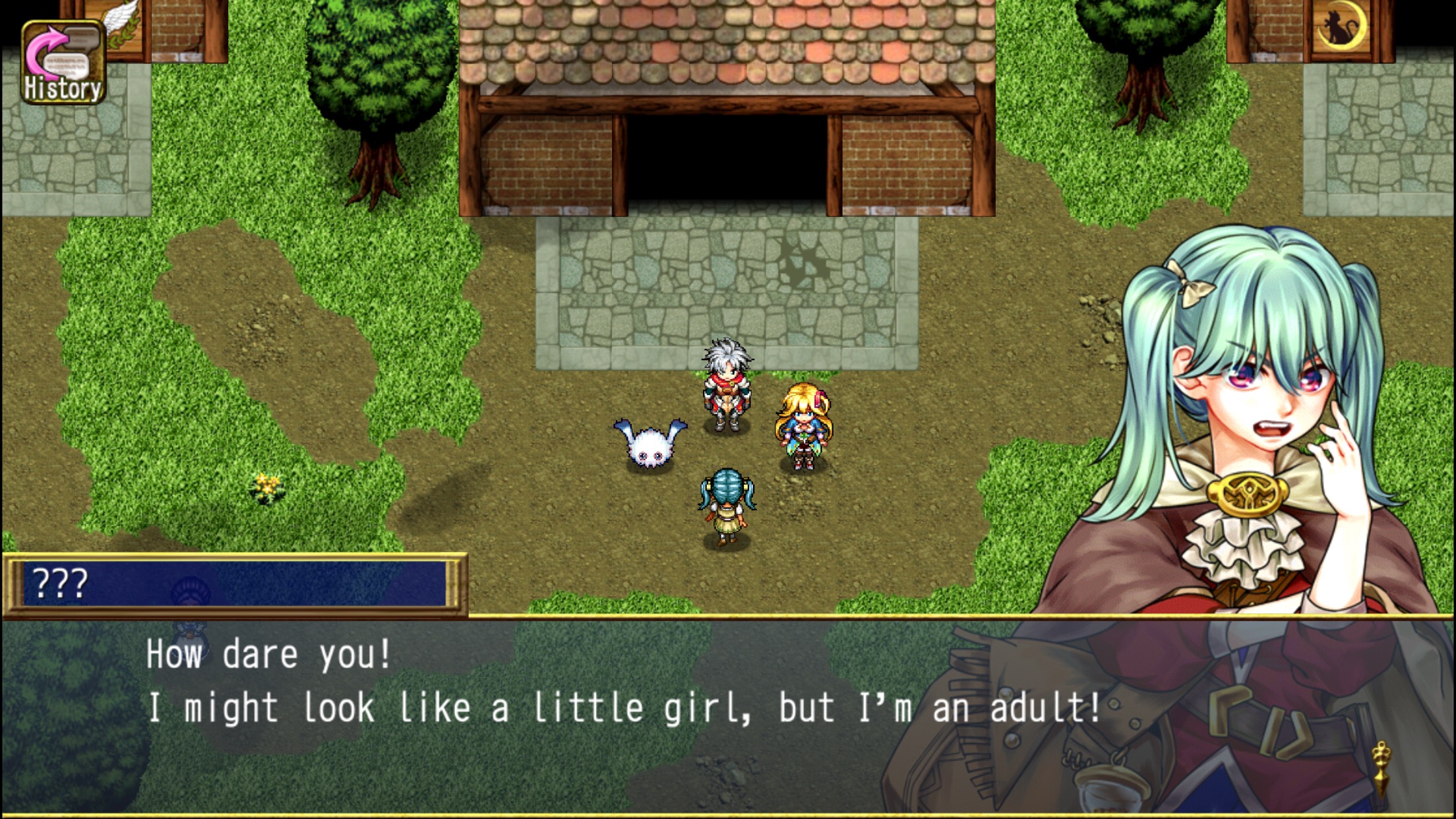 The story is based around a war between the Humelia and Demonius Tribes. Yes, that’s about the level of sophistication you can expect here. Anyway, we join in as the hero of the Humelia Tribe, Yamato, is about to take on the Demonius King in the epic final battle. He is victorious, but nobody knows what happened to him after that fight. Well, since he is our hero, we follow him after that fight. He wakes up 200 years in the future. He meets a strange fuzzball named Rick and a woman named Tsubasa, whose journey for her lost mentor kicks off the main adventure. The story isn’t anything to write home about, but the translation is alright and some of the character interactions are amusing enough.

Mechanically, there’s not much here you haven’t seen before in one of the other 50 or so Kemco games released on iOS so far. Wander from town to dungeon to town, solving problems by fighting monsters in turn-based battles. Level up, collect gold, buy new gear, and so on. As with most of the recent games from EXE-Create, there’s a somewhat elaborate weapon-augmenting system that you’ll want to take advantage of if you want to beat the game’s final boss. Rather than fusing weapons as in other recent games, in Fairy Elements you’ll collect a variety of dropped items from enemies that are used to upgrade weapons and armor. You can also make use of cauldrons to improve your gear. You’re given one to use for free, with the other unlocking via spending premium points. Why would you want more than one? Well, the cauldrons have cool-down timers, ranging from one hour to several depending on what level of upgrade you select. 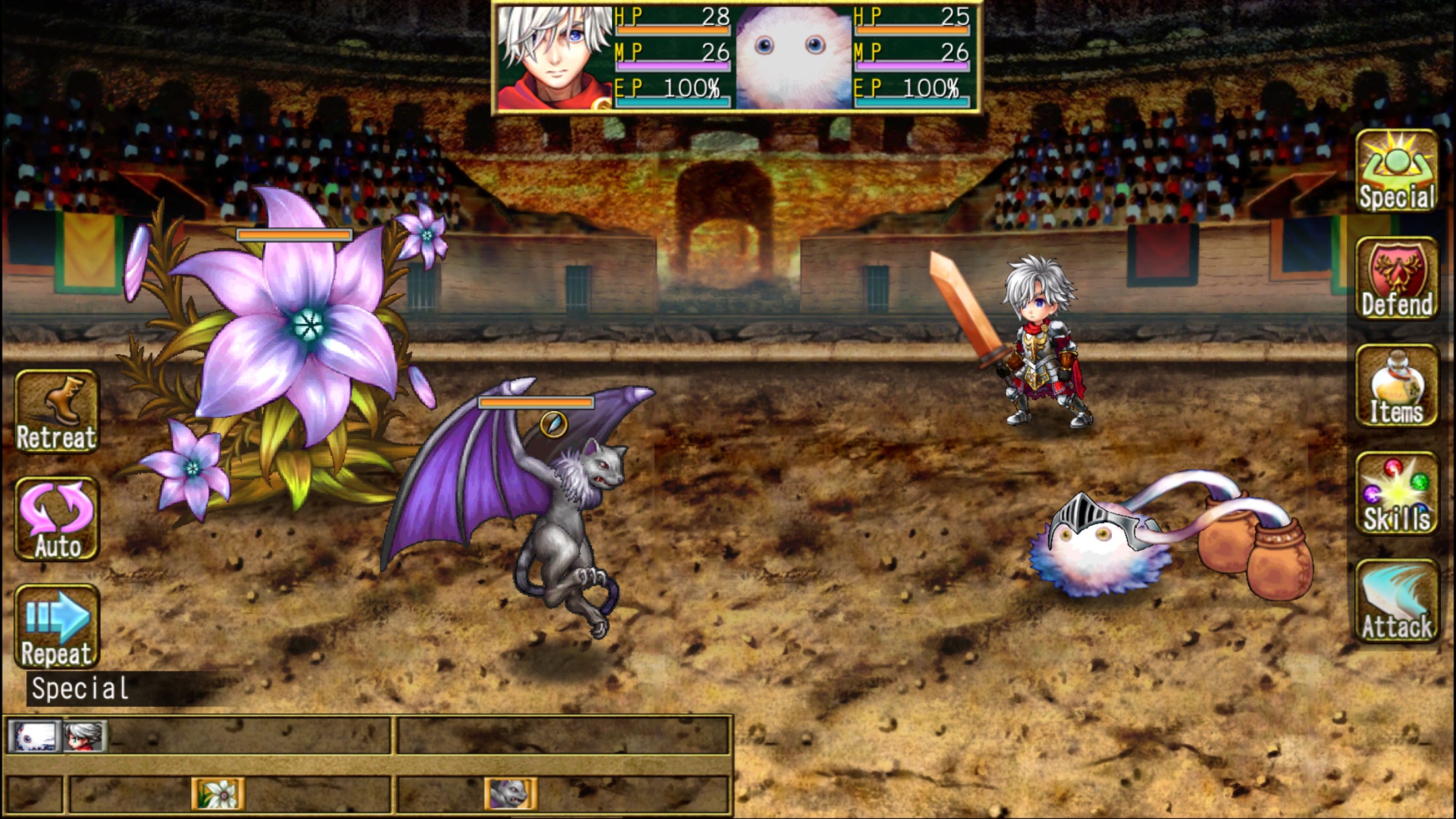 Aside from cauldrons, you can spend those premium points on some special cheat items as usual, and to attempt to get some special loot from towers. You can also use your premium currency to revive in battle if your party wipes, which I think is a first for an EXE-Create RPG. You can also watch video ads to fully heal your party. If you don’t want to see that particular offer, you can turn it off in the options, at least. The game isn’t particularly hard to beat without any of these luxuries, mind you. In fact, it can be downright easy if you play it right, particularly if you’re playing on the lower difficulty setting. There’s not much of a post-game to speak of, unfortunately, so the only real challenge comes from the final boss.

Another new mechanic is the ability to enter a special battle arena anytime you like. You won’t earn experience points or gold, but you will earn drops and other rewards. If you lose in this area, you’ll simply get booted out back to the map you were on, albeit in critical condition. You’ll keep any drops you earned, though. Rounding out the new elements are special enemies with visible lines of sight. You can avoid battling them if you stay out of their sight. It doesn’t make much of a practical difference, mind you. Very few enemies are troublesome enough to fear battling. 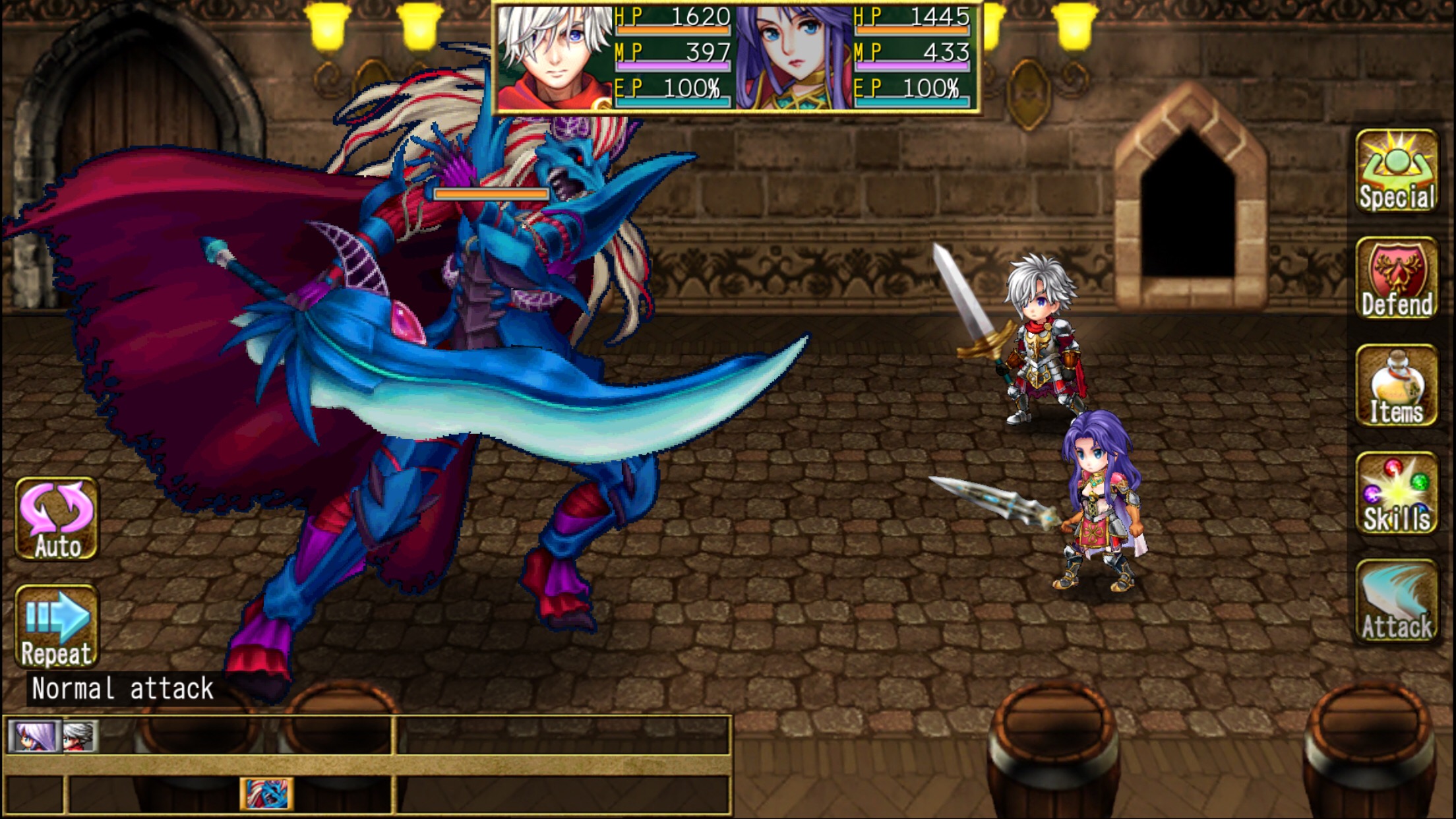 While the basic engine hasn’t seen much in the way of changes, it does sport some new visuals. Characters have a cleaner look, but are obviously digital paper dolls. Animations look cheap, but it’s clear the new visual style is there to accommodate the variety of costumes each character can get. I’m not sure the trade-off is worth it, but it is what it is. One pleasant surprise comes from the game’s soundtrack, which is composed by Ryuji Sasai. He was one of the main composers on Square’s Super NES RPG Final Fantasy: Mystic Quest, and also worked on the soundtracks of Final Fantasy Legend 3 and Treasure of the Rudra. He didn’t strike it out of the park in Fairy Elements, and as usual, there aren’t many tracks, but it’s better stuff than we typically get in Kemco’s games.

Unfortunately, that’s about the only noteworthy element of Fairy Elements. Otherwise, it’s a smaller and less satisfying slice of the usual fare from EXE-Create, one that has more hooks and requests for extra purchases than we’ve seen before. The game comes in two forms, a free version with ads and a premium version that removes any mandatory ads and gives you a bunch of premium points to start with. If you find yourself in need of an offline single-player JRPG, it’ll carry you through a weekend, if not much more than that. But it’s hard not to notice these games starting to go increasingly off the rails with each new release. Fairy Elements is still worth noticing, but only just.