Big Bucket Software is back after their solid 2014 adventure game Space Age ($4.99), returning to their breakout hit The Incident (Free) in a sense with Stagehand ($1.99). Featuring Frank, the protagonist of The Incident, and a retro, pixel-art style, your goal is to keep Frank running along by controlling the platforms underneath him. You drag to keep him running, or to jump from one to another, trying not to obstruct him, as if he gets slowed down, he will get scrolled off the screen and that’s the end of Frank. Sorry, buddy. But you do have conveyor belts that will speed Frank along so he can recover some of the gap between him and oblivion. Helpful! It’s all a clever concept, and it has the production values you’d expect from Big Bucket. But, this game feels like it’s in a place out of time, because it’s a $1.99 endless game with little to unlock, where the replay value is in getting high scores. It’s a quality game, but it might not have the depth in the modern context of the App Store to make everyone happy. 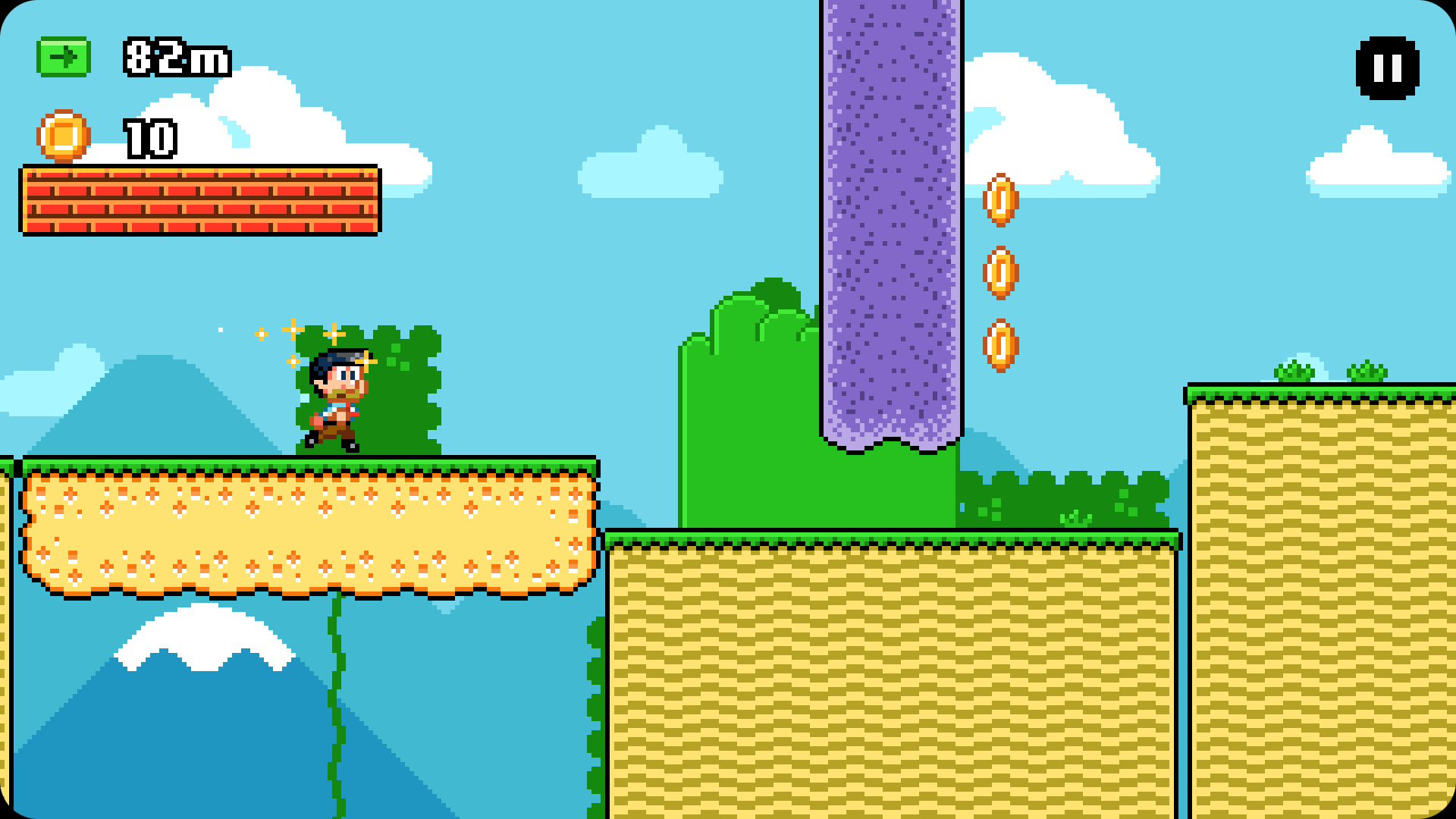 What’s interesting about Stagehand and its little-used stage modification gameplay is that the difficulty is centered around performance and endurance. You’ll have to deal with brick walls, spike balls, and more, over time, and the spike balls in particular start appearing more and more. But, it’s not like there’s a sudden increase in how many there are, any increase in difficulty is so subtle you might not notice it. You just have to figure out how to handle different scenarios, like how to deal with two thin platforms sandwiched around a brick wall. Or how to deal with height discrepancies that pop up. As you start to learn how to approach these scenarios and react to them, you’ll do better. And as you get more consistent, the more your average high scores will go up. Again, you’ll see some subtle changes as you go along, but it’s still mostly about mastering basic skills and repeating them more and more.

Stagehand does an absolutely exceptional job with its aesthetic. It nails the feel of Super Mario World in a way that even Nintendo would be impressed by. The game looks and feels like it would if it was a 16-bit game on the Super Nintendo. It would sound like it, too, with those authentic sound effects. The music by Cabel Sasser eschews chiptunes for a track featuring guitar, strings, and horns that lasts a few minutes before looping. He wrote an interesting post talking about the composition of the music. It’s an impressive track, and the contradiction that the music makes with the theme of the game is interesting, yet works in harmony with it! Still, after a while, the song can get a bit repetitive, so this is a good game to fire up your own tunes to listen to while playing. But do give the song a few spins at least! 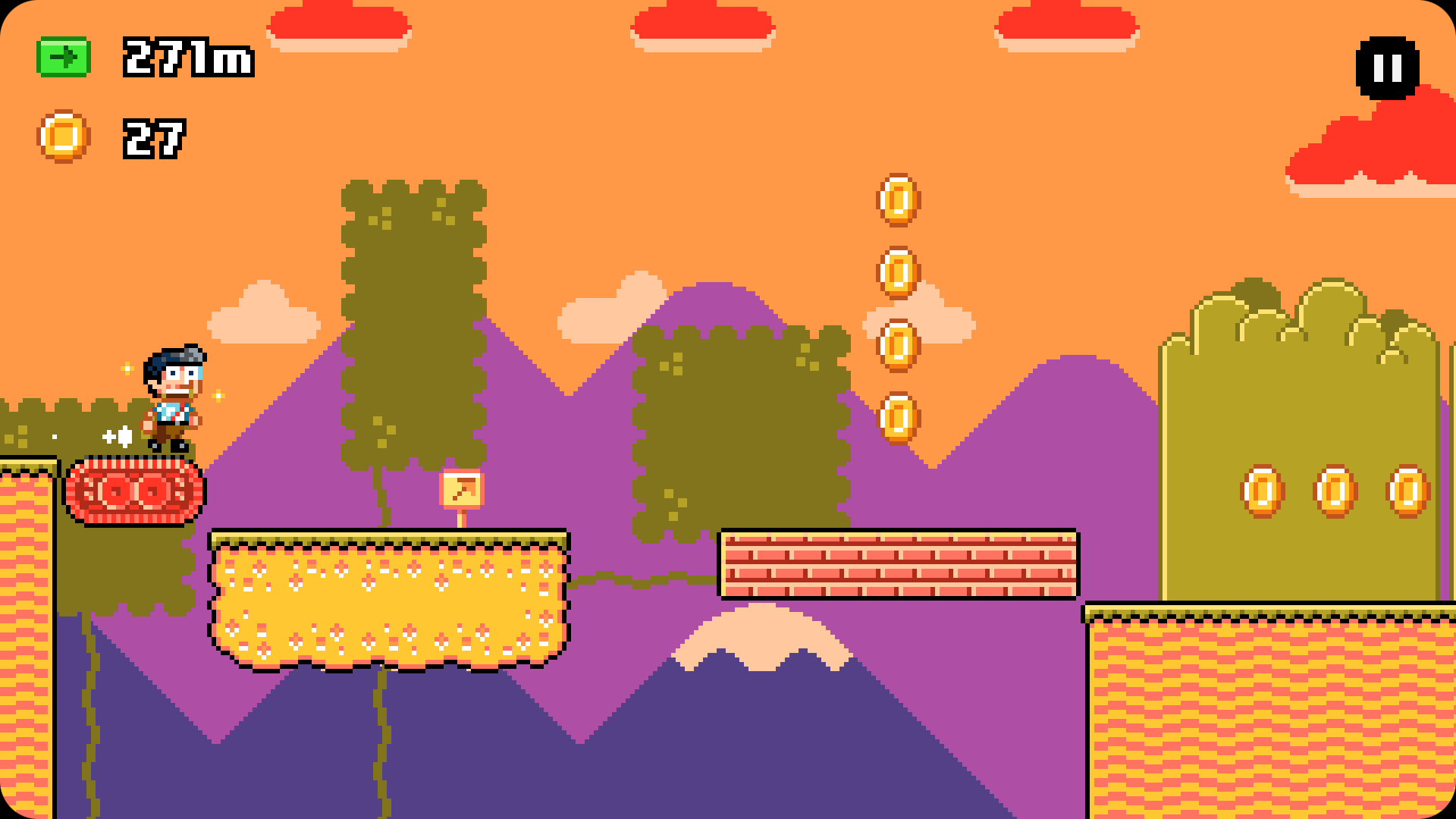 Big Bucket knows how to do production values, for sure. Even little touches like Space Age supporting the native iPhone 6 Plus display at 1080p as opposed to being bigger and scaling down go a long way toward showing just how dedicated this team is to making their apps feel good. The pixels on the iPhone 6 Plus for Stagehand look rather crisp, so that’s likely the case here too. Regardless, this is a game that knows how to feel like a well-made game should feel like. Even little touches like Game Center friends appearing while you run just add a little bit of a good feel to this game.

The controls work perfectly. You’ll quickly adjust to changing the platforms as the screen scrolls to the point it becomes second-nature within a short amount of time. The platform moving is quick and responsive, allowing you to make those sudden moves that you need to do in order to do well. You’ll have to be careful that you don’t grab the wrong platform, but as you play more, you’ll get better at it. But you don’t feel like you’re ever really fighting the game. This game works rather well on both iPhone and iPad, I can do about equally well on each platform, though maybe the smaller screen space of an iPhone lends itself to quicker reactions, though there’s less space to grab a platform, of course. 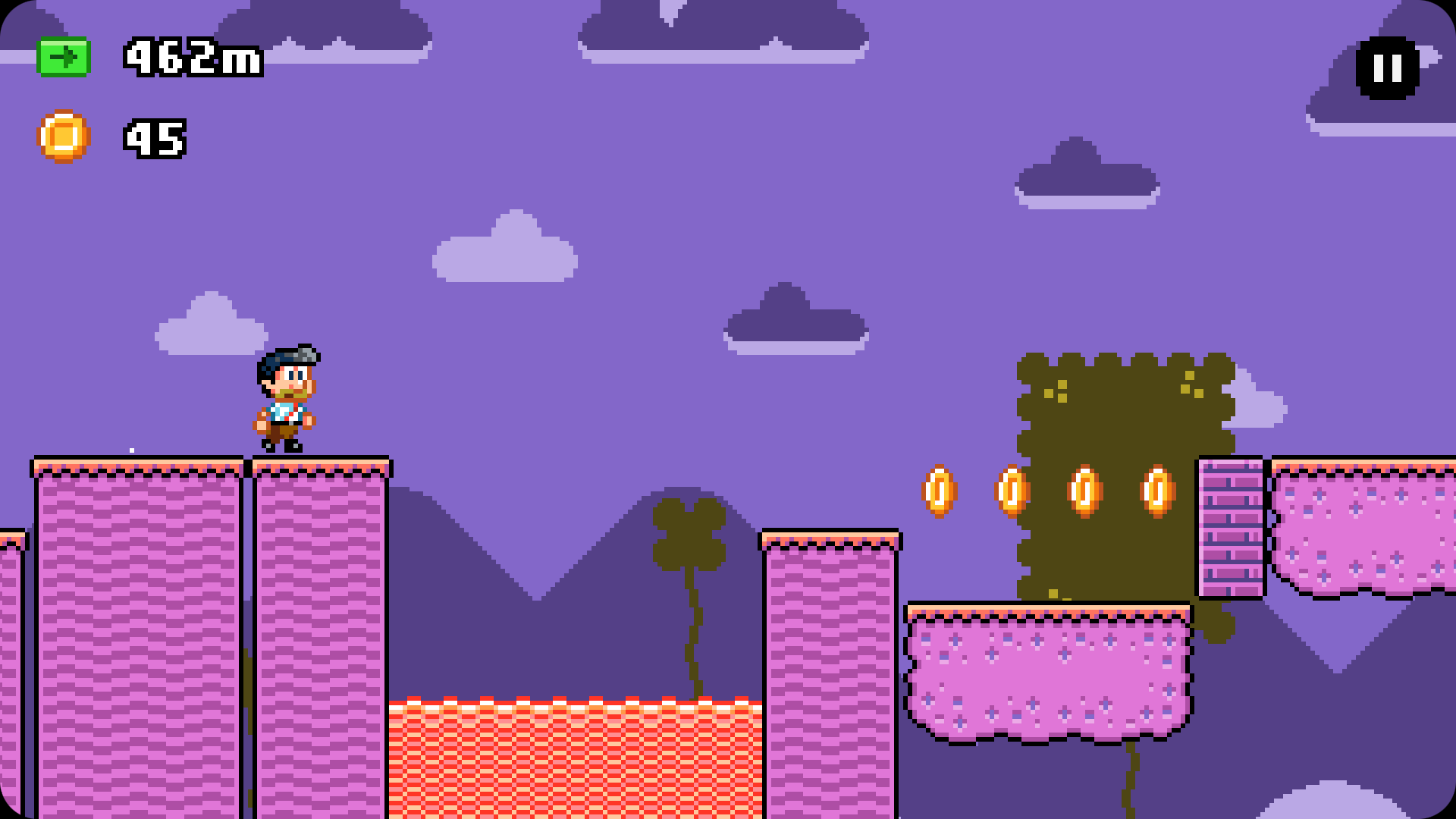 In many ways, Stagehand feels like a game from an iOS era way gone by. If this was a game made by 2017 standards, it sure feels like it’d be free, with video ads to continue watching. And powerups that you’d have to spend the coins on to say, make the conveyor belts propel you faster, or jump a little higher, maybe get slowed down a bit less. But yet, this is just a game where you’re going for high scores, and there’s just the character unlocks that the player knows that they have to work toward, unless there’s something about the game being about starting on Monday and going through Tuesday, and Wednesday…hmm. Hey, the Infinity Drive mode in console/PC dual-stick shooter Assault Android Cactus actually has an ending that took forever for players to discover, so I’m not putting anything past anyone at this point.

But the problem with this limited scope is that Stagehand kind of feels shallow in a 2017 context. Four or five years ago, I think this wouldn’t be a problem, but in 2017, it does feel a bit lacking. Still, it’s a $1.99 game, and maybe not worth complaining about too much, particularly when there’s an audience that wants this kind of experience. So if an endless high score game that has no ads and just one purchase price, well, this is the game for you. But for the mobile gamer who’s gotten used to even simple games having a ton of unlocks and features, this game certainly is lacking in that regard. There are 3 characters to unlock at 1000, 4000, and 8000 points, the latter two being particularly difficult milestones to reach. 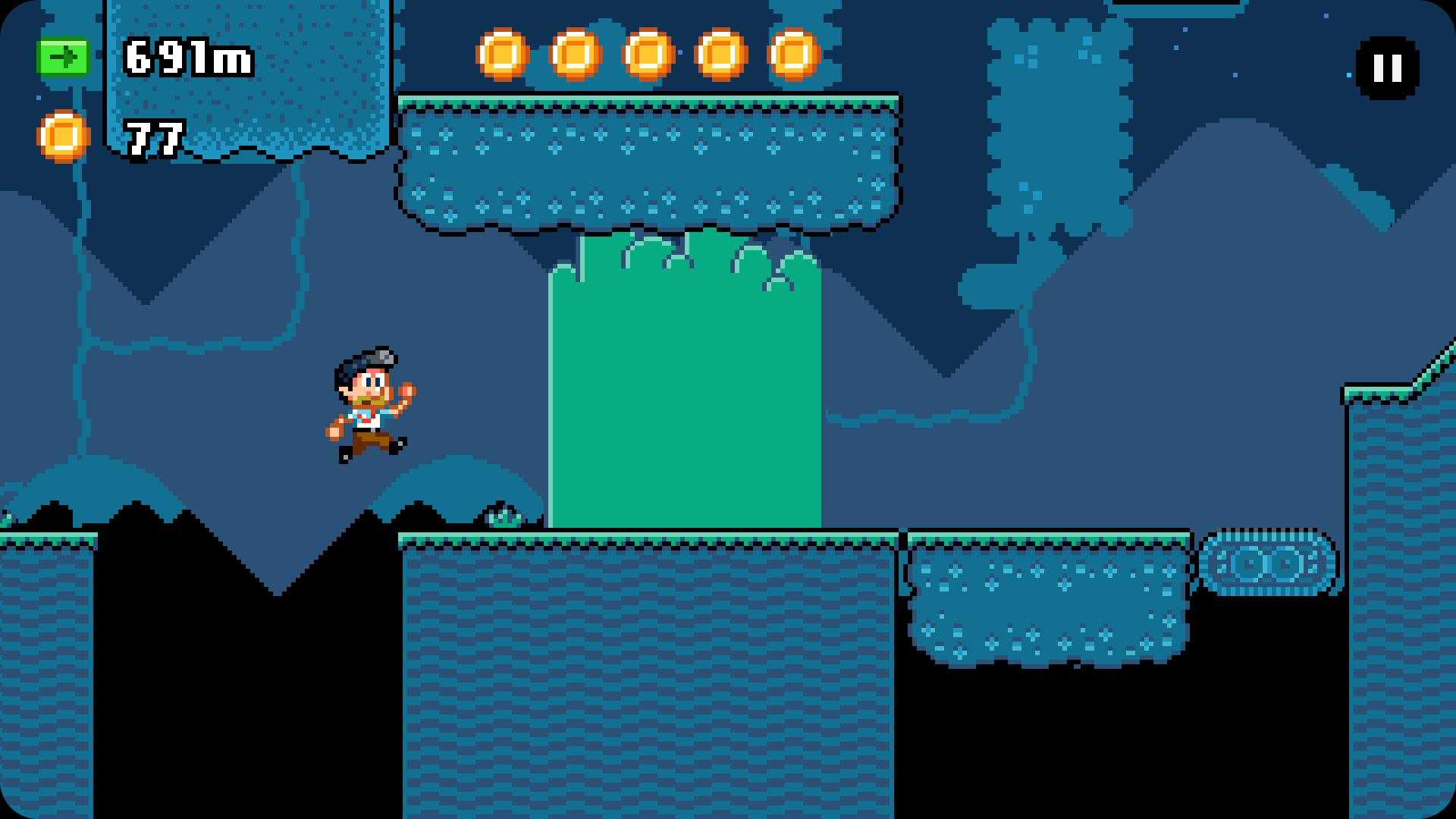 Also, Stagehand just being endless makes me question whether this game would work as a level-based game, too. Surely it could, right? Maybe the concept works best as an endurance test, where the challenge is to keep performing with the different combinations of platforms that you see. But still, it feels like there’s a lot of directions that Stagehand could have gone in that it didn’t.

On the whole, I recommend Stagehand. The game is so well-made that it provides a ton of fun for those who enjoy chasing high scores. And if you like pay-once games with no distractions from the core experience, this is for you. But perhaps you’re just used to the status quo of high score chasers now having loads of bells and whistles, or you need something deeper than just a high score chaser. This isn’t the right game for everyone, but it is undeniably quality stuff, and could just hit the spot for you if you want a no-nonsense endless game.