Hello, gentle readers, and welcome to the Classic Reload, the monthly feature where we goo what we want. Each month, we take a look at a classic game from the annals of iOS history to see how it holds up in the here and now. It’s a chance to revisit old favorites, reflect on their place in the overall library, or simply to take a deeper dive than our reviews typically allow. As the King Slime, I try to choose a balanced plate of games from month to month, but if there’s something you really want to see, let me know by posting in the comments below. You might not see your suggestion soon, but I will add it to the master list for future consideration. 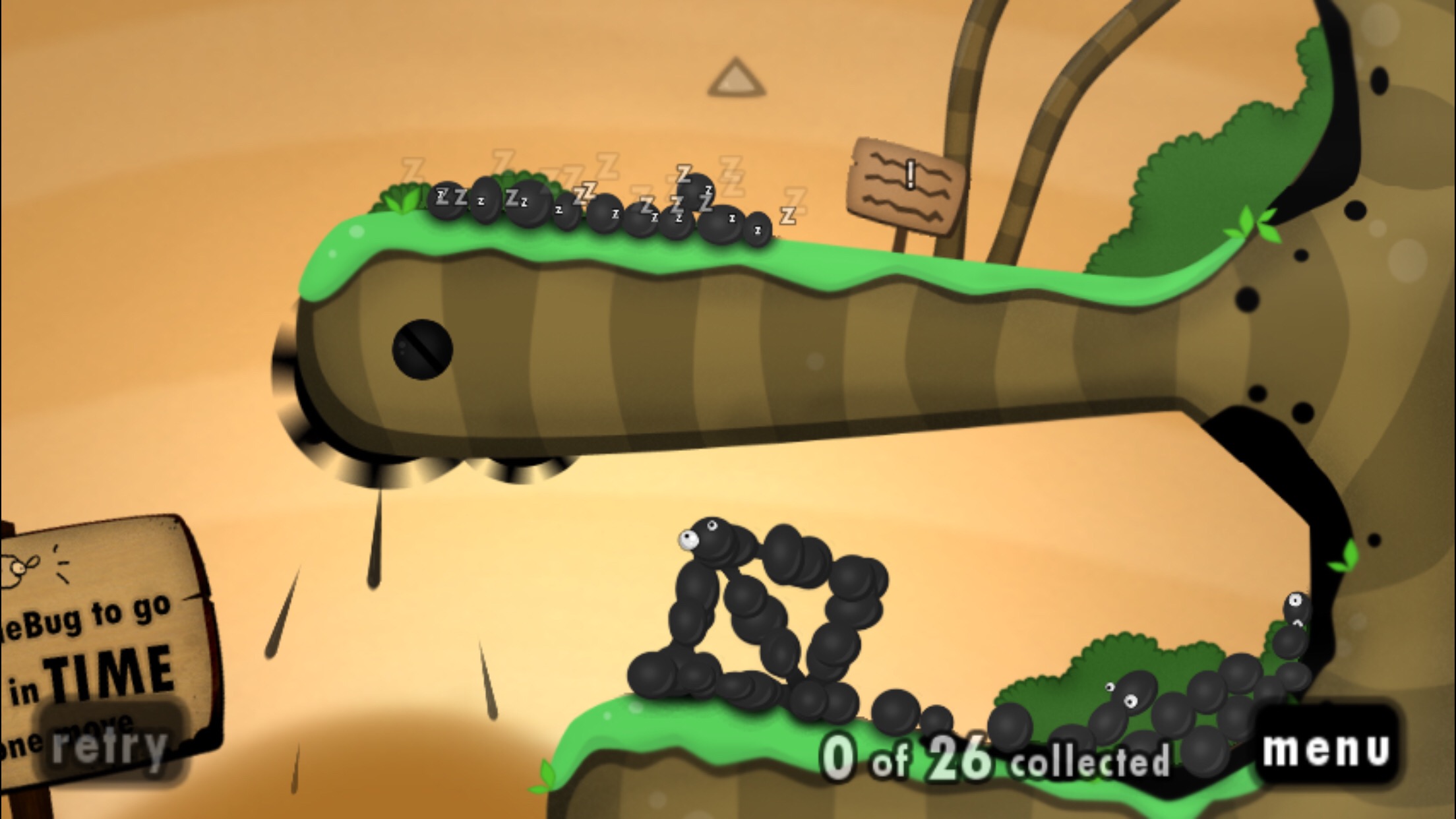 Way back in 2006, when the whole indie developer ball had really just got rolling, a couple of former Electronic Arts employees came together to create a company called 2D Boy. After spending two years of their time and $10,000 of their savings, the development team finally had their first game ready to go. World of Goo ($4.99) made its debut on Windows PC and the Nintendo Wii on October 13th, 2008. An OS X version came mere weeks later, and a Linux version arrived early in 2009. The game received high praise from critics and players like, and appears to have sold well enough to keep the developer going. Later in 2009, 2D Boy announced via their blog that they were trying to port the game to iPhone.

That ended up proving to be a difficult task, but hope was just around the corner. The April 2010 release of the original iPad inspired 2D Boy to give the idea another shot. In late November of 2010, the developer announced on their blog that World of Goo would be releasing soon on the iPad. It came out only a few weeks later, on December 16th. The game proved to be a natural fit for touch screens, and was again showered with praise, including a five-star review and Game of the Year award here at TouchArcade. A few months later, 2D Boy finally figured out how to get it working well on iPhones, opening the game up to all iOS players. An Android port came in 2011, and 2D Boy’s successor Tomorrow Corporation just recently announced that the game would be ready for the upcoming Nintendo Switch launch. 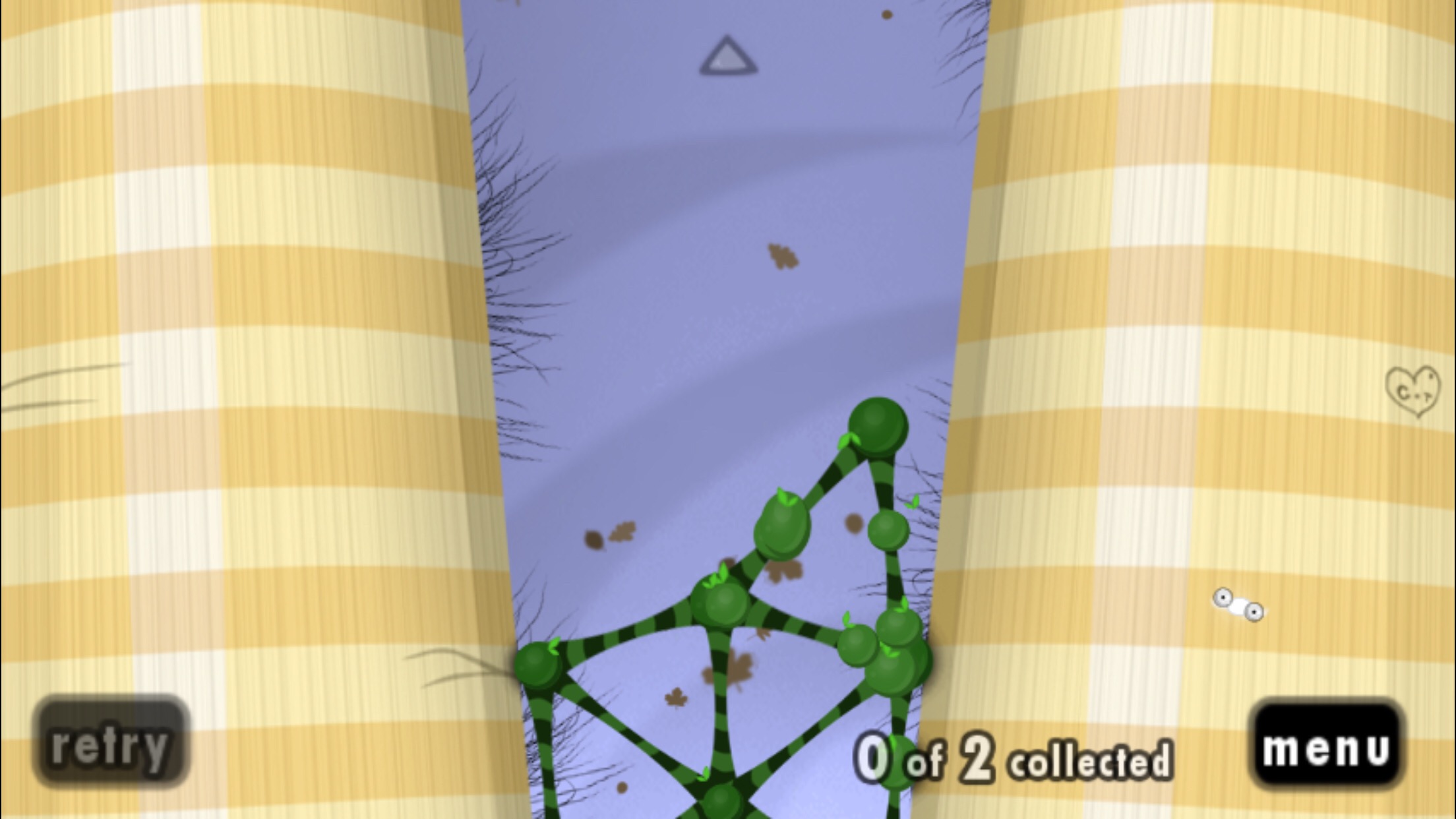 Although the game’s last update was a few years ago, World of Goo still looks like it could have come out last week. The original app predated things like universal apps, the Retina display, and larger iPhone screen sizes, but updates brought it up to speed, at least to the point of the iPhone 5’s tech. It still looks and plays well on an iPhone Plus screen, so it’s not like it needs another update save perhaps if Apple plans on doing a 32-bit app cull later this year as some suspect they will. To be honest, the only real marker of its age is the type of game it offers. Physics puzzlers aren’t quite as in vogue as they once were, and the fact that it’s a paid game of this type with no IAP or incentivized ads also points to it being from another era.

Basically, World of Goo is a game about going from point A to point B using limited resources. Each stage starts with some balls of goo in one place and an exit pipe in another place that’s well out of reach. You need to get a certain number of the balls to the pipe to clear the level. Like the classic Lemmings, that goal is balanced against the fact that those balls are also your means of bridging the gap. The balls of goo will form structures as you drag them and drop them. While some types can be broken off of the structure and used again, many of them will be lost if you use them as building materials. Ideally, then, you want to use as few of the fellows as possible. 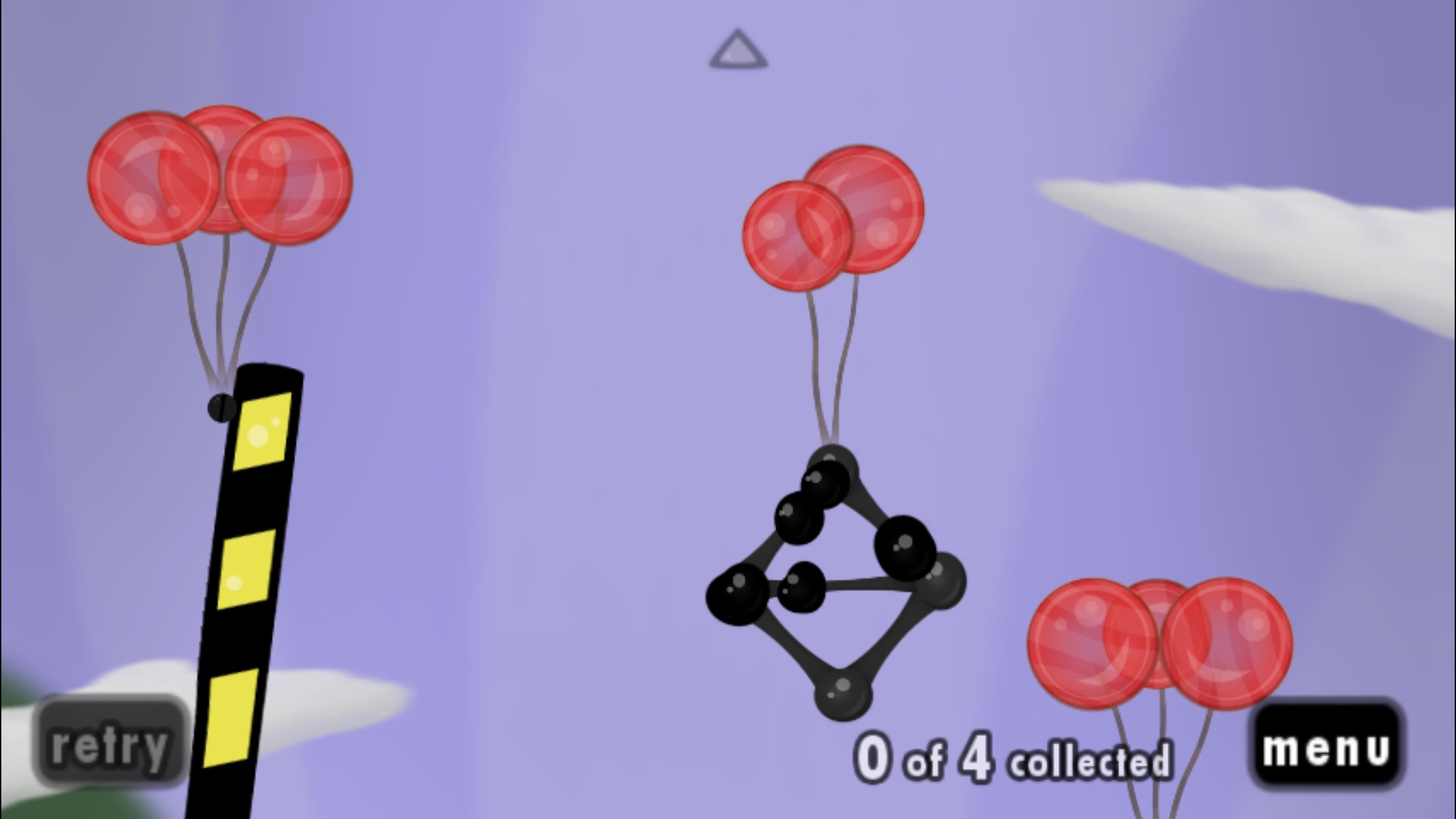 While that might seem easy enough, there’s a dangerous force that seeks to impede you at every turn. Yes, I’m talking about that vile fiend ‘physics’. While every type of goo ball is a little different, most of the little gobs are quite flexible. If you don’t balance your goo structures carefully, the whole thing will tip over. At best, you’ll have to start building up again from scratch. At worst, you might as well hit the reset button. The best way to keep your structure sound is by carefully balancing it and bracing it, but that uses up more goo balls. The optimal route to success in each stages is in finding that perfect balance where your goo structure is just barely avoiding a total failure. The relatively free-form nature of solutions makes this process quite a bit of fun.

In earlier stages, all you really need to worry about is the force of gravity. Which is admittedly a pretty respectable force, keeping us all from flying off into space and everything. Thanks, gravity! You are my enemy in this game, but I firmly believe that when we next meet, it will be as allies. It’s not long before the levels start throwing a lot more things to worry about at you. Wind, unstable foundations, spikes, and more conspire to end your silly machinations before they even get started. Compared to most other games of this sort, World of Goo ramps up its difficulty fairly quickly. It can be a bit jarring if you’re not used to such demands, but the developer was nice enough to put in an option to skip a level if you’re having trouble. I think that was a good call. On the one hand, it is a puzzle game, so you’re meant to pick away at a problem for a while until you have a satisfying breakthrough. On the other hand, getting completely stuck partway through a game and being locked out from the rest isn’t much fun for anyone. 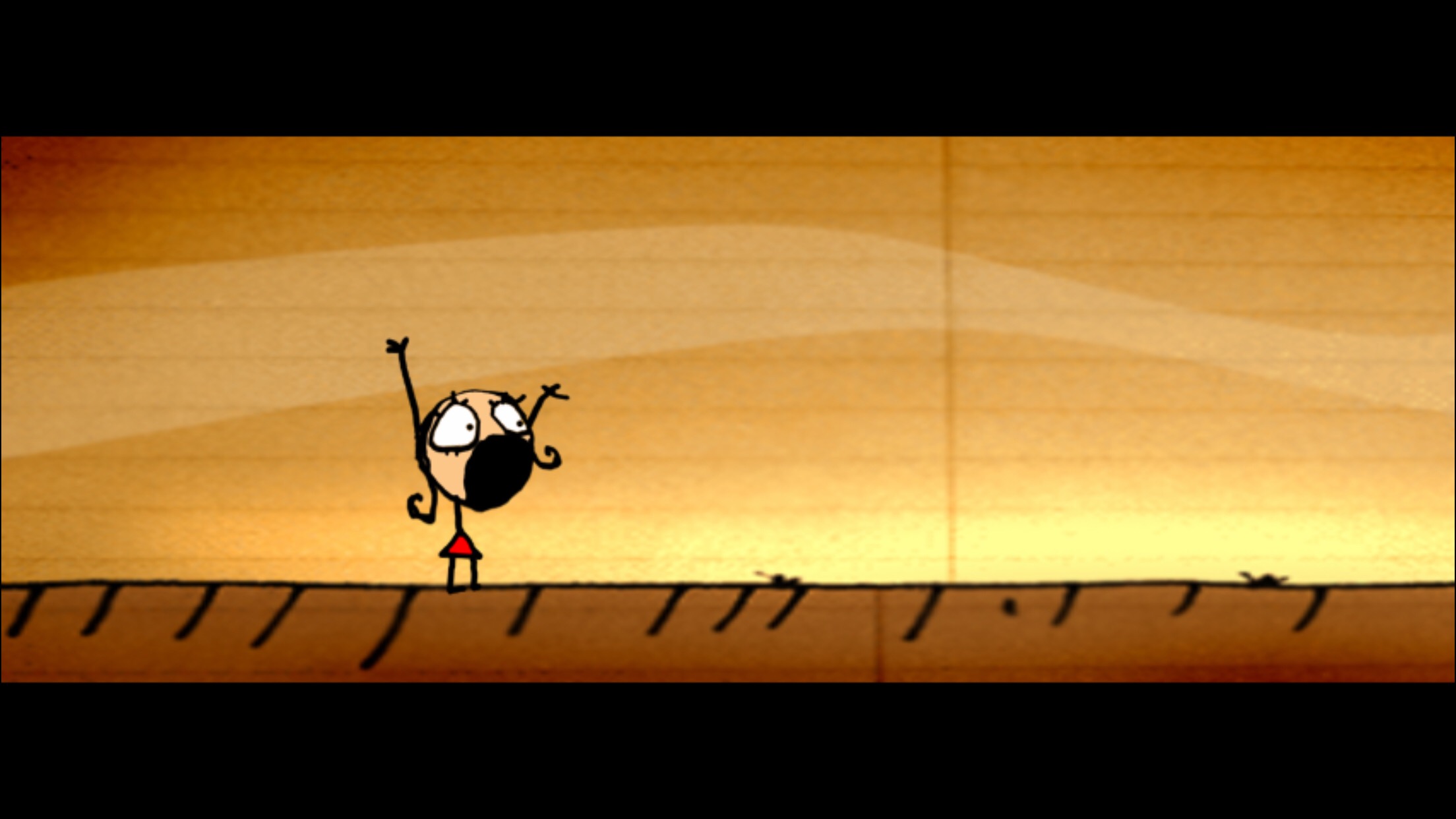 The game is such a natural fit for touch screens that it’s hard to believe that it didn’t originate on them. Dragging and dropping goo balls is extremely easy, and multi-touch support allows you to zoom in and out while you’ve got a hold of one of the goo blobs. It’s an ideal game for popping in and playing for a few minutes at a time, but it also holds up well as something you curl up with for a few hours. There are almost 50 stages in the game, and if you’re dedicated and clever, you could probably beat it in a couple of longer sessions. That said, while today’s mobile gamer might be used to games with hundreds of stages, many of which can be beaten in seconds, that’s not really what World of Goo is about. There’s a lot to digest in each stage of World of Goo, from the unique layouts that require a careful and steady plan, to the small visual details that bring the game to life. I think this is the source of many people’s frustrations with the game. They are perhaps trying to race at it like it’s Angry Birds, when the intended pace here is quite different.

By introducing a steady stream of new goo balls and level gimmicks, the game manages to keep on surprising you all the way through. Of course, how much you enjoy replaying the game is going to depend largely on how much you’ve forgotten your first playthrough or your desire to try new solutions. I suppose the problem here is that the more difficult levels don’t support much variety beyond the intended path, so once you’ve figured them out, it’s not as satisfying to play them again. The OCD mode at least gives you one reason to play each stage again, making the requirements for success much stricter. 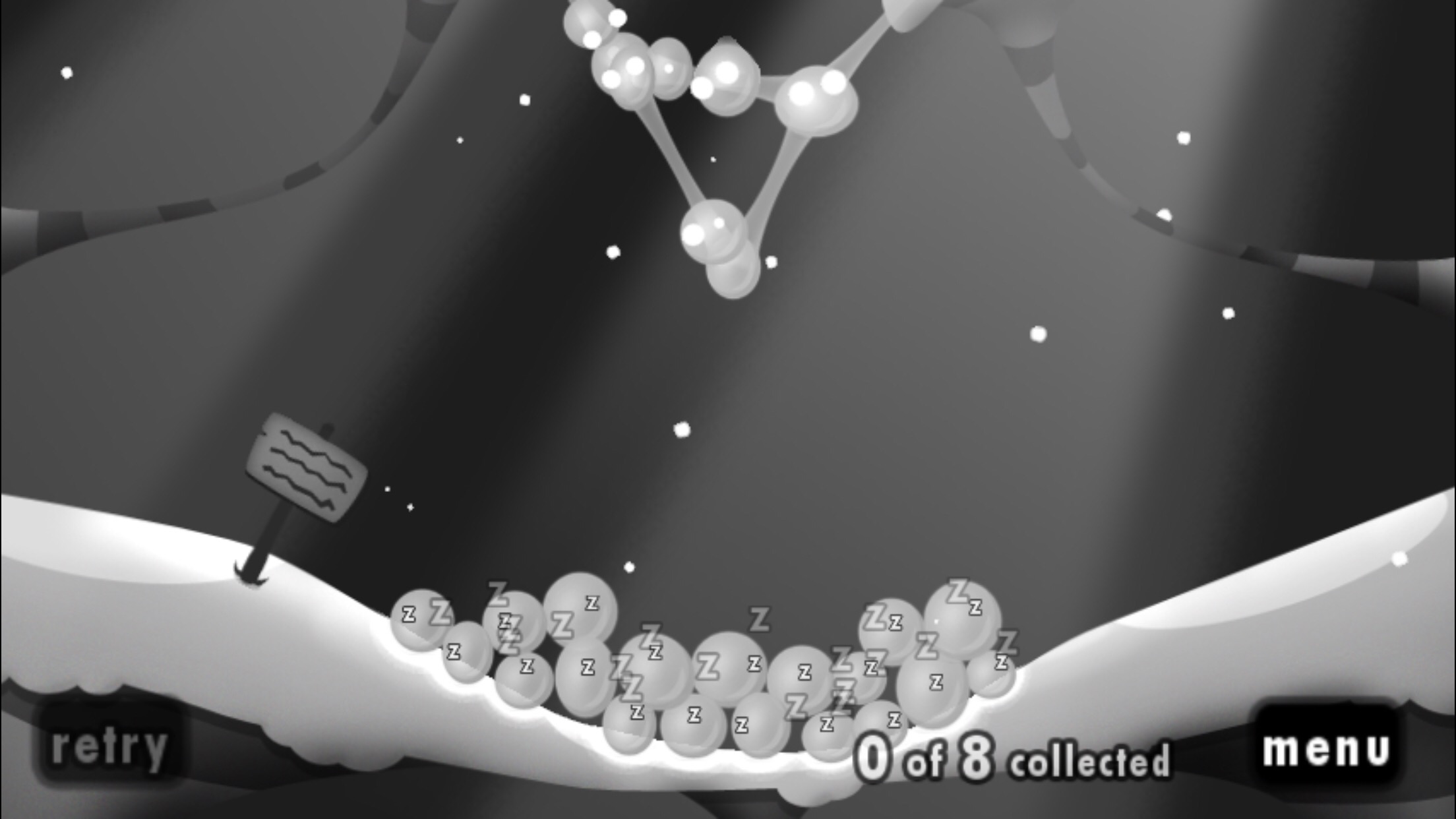 You’re motivated to get as many goo balls to the exit already, though. An extra mode lets you take all the extra balls you’ve saved and try to make the tallest tower you possibly can with them. You’ll be able to see how far other players have gotten through a Game Center connection that shows the heights of other players’ goo towers as clouds with their names on them. The more extra goo you have, the higher you can go. So naturally, you’ll want to do your best whether you’re in the OCD mode or not.

This was my first time playing the iOS version of the game, and although it doesn’t substantially differ from the WiiWare version I played back in 2008, eight years is apparently more than enough time to forget just about everything I knew. That does not bode well for that money I put into my university degree, I suppose. With the solutions to the levels long-forgotten, it was like playing the game fresh again, and I had a really good time doing just that. Now, iOS isn’t exactly hurting for choice when it comes to physics-based puzzle games, but in a sea of fast food selections, World of Goo feels gourmet. Its presentation is gorgeous, with lush visuals and a wonderful soundtrack. The levels are substantial, and the core mechanic is really neat. It’s a great game to play on mobile, and I’m glad its developers have kept it going so far. 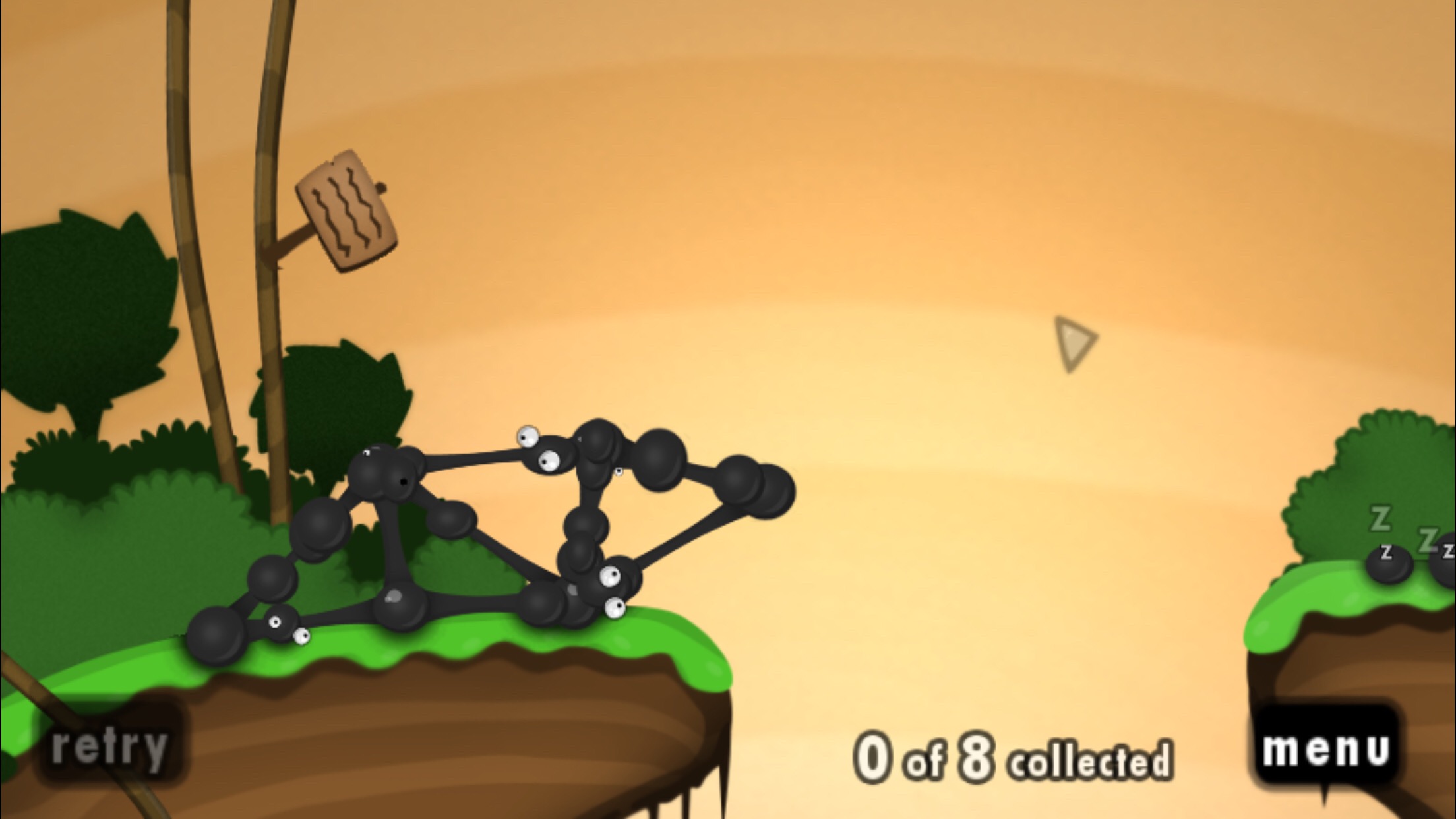 That’s just my take on World of Goo, though. What do you all think of this one? I want to know, so please post your thoughts in the comments below. I’d also like to remind everyone that the February RPG Reload Play-Along is still going strong in the forums. Everyone is having a really good time playing through Crescent Moon’s Aralon: Sword and Shadow (Free). It’s not too late to join in, so swing on by the thread and say hello! As for me, I’ll be back next week with another developer interview.