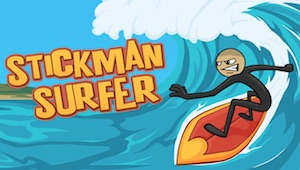 Traction Games have been specializing in the stickman-based extreme sports corner of the mobile games world since as far back as 2010, when we briefly covered their original release Stickman Skater ($1.99) (called just Stick Skater at the time). Since then, they’ve taken their skinny main character Stickson to the slopes in Stickman Snowboarder ($1.99) and to the dirt in Stickman BMX ($1.99), the latter of which we reviewed back in 2011. The next logical step would be to take him to the water, and that’s exactly what Stickman Surfer will be bringing to the table when it releases this Thursday. It’s not all about hitting the waves though, as Stickman Surfer looks to encompass other activities that one might encounter living by the beach like cruising in your dune buggy, hitting the halfpipe on your skateboard, or just chilling in your beach shack.

For Stickman Surfer, Traction was inspired by some of the classic extreme sports video games which included multiple modes or mini-games, like California Games and Skate or Die. In fact, the halfpipe portions specifically remind me of the amazing halfpipe mode in Skate or Die 2 on the NES, which is a fantastic thing. More contemporary inspirations include other mobile game hits like Jetpack Joyride (Free) for the surfing portion and Hill Climb Racing (Free) for the dune buggy sections. Hopefully it’ll all come together into one cohesive beachy experience when Stickman Surfer hits the App Store this Thursday.