When Traction Games first brought Stickman Skater [99¢/Lite] to the App Store, it was a bit of a surprise hit. With the release of its spiritual successor, Stickman BMX [99¢/Lite/HD] it’s a question of how much of the core gameplay will change with the name while still retaining fans of the original.

Not much, it turns out. For better or worse — depending on whether you like Stickman Skater — Stickman BMX is essentially the same game. You’ll get two buttons to use, one that controls your pedals and another that makes you jump. There is an advanced option that allows you to control your tricks as well, but although at a glance you might think Stickman BMX is about pulling tricks off, it has more in common with the likes of Canabalt than it does with anything else.

That’s one of the main problems with Stickman BMX, it might have worked a bit better as a one-button game. The requirement to constantly hit the pedal button is more annoying than it is helpful and you’ll rarely find yourself wishing you could slow down. Even with the advanced controls and scoring bonuses, the tricks still don’t feel all that integral to the game, which means you’ll spend most of your getting through the levels, not flipping over bars. 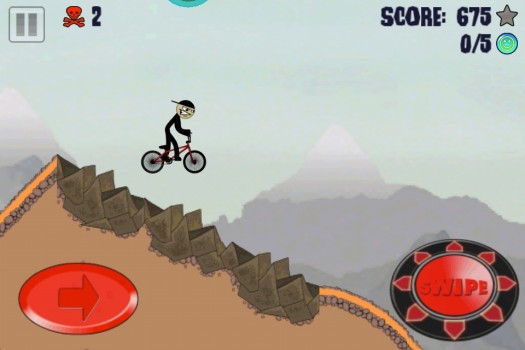 Even though they’re not particularly complex, the levels do keep you on your toes. Stickman BMX cruises at a faster pace than Stickman Skater, so you need to pay a little more attention to what’s coming up. While a lot of the time the game just throws objects in front of you out of nowhere, the fact you can branch through the levels in several different paths is an interesting take. There is also plenty of variety — sixty levels in four different zones are included in the game — with more available for in-app purchase if you can’t get enough. As you’d expect, there are different medals you can get for getting different tokens and collecting stars as well as finishing without dying. Also available as an IAP is the ability to use a skateboard as in the first game, if BMX bikes aren’t your thing.

As far as level design is concerned, Stickman BMX takes a lot of the ideas of the original and expands on them. The biggest improvement between the two is the design, where Stickman Skater was complacent in pushing you down a linear path toward a finish line, Stickman BMX at least offers you multiple ways to get there.

As you’ve probably already noticed from the screenshots, Stickman BMX doesn’t have the best visuals in the world. The simple, cut-and-paste style aesthetics are certainly intentional, but they won’t be turning heads. It would have been nice if they’d spent a little more time on the menu and button design too, because they’re completely hideous. For what it’s worth, the sound can get a bit aggravating as well and you’ll likely find yourself muting it from the start. But this clearly isn’t a game worried about its aesthetics, it’s all about how it plays.

It might not be pretty, but if you liked Stickman Skater, Stickman BMX does a good job of bringing enough new content to make it worthwhile. As an overall experience, it doesn’t offer much new to the table, but it does expand on the ideas of the original in a way that changes how you’ll approach it.