Well, here we are with our almost final Game of the Week pick for the year of 2016. Actually, I’m not sure what’s going to happen when iTunes unfreezes next week, so this might actually BE the last one of the year. Anyway, despite the freeze, there were actually a ton of new games released this week, and although we’ve already included it in our 100 Best Mobile Games of 2016 list, we thought the surprise arrival of RollerCoaster Tycoon Classic ($5.99) deserved an extra special nod. 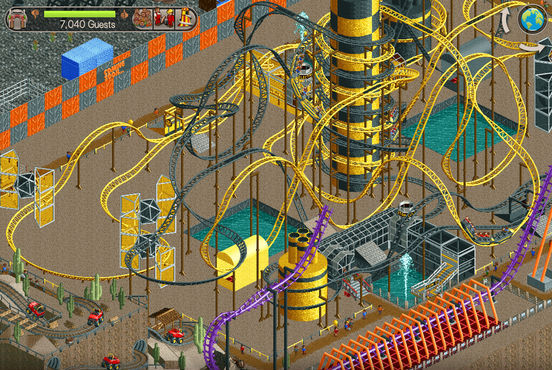 The RollerCoaster Tycoon franchise has had a rocky history on mobile. Back in April of 2014 RollerCoaster Tycoon 4 (Free) released and, well, let’s just say it wasn’t very well-received. It was a completely bastardized free to play version of the game, and although it seemed to be well done and was probably perfectly acceptable to the many people who enjoy the free to play style of games, it was a slap in the face to longtime fans of the series.

The following summer, the franchise was redeemed on mobile with the release of a fully premium port of RollerCoaster Tycoon 3 ($4.99), which didn’t feature a single in-app purchase. It was a great port of a classic game, but it was also the first entry in the series to eschew the isometric view and fantastic pixel art of its 2D predecessors and be fully rendered in 3D. Not a bad thing, mind you, but definitely a personal preference sort of thing. Fans of the truly classic RollerCoaster Tycoon games were still left in the cold.