Apart from being a really creative, awesome RPG, the biggest thing that struck me about the original Siralim (Free) was just how frequently and magnificently it was updated. Everything from balance adjustments to new graphics to entirely new systems was added to the game after its release, and for quite some time, you could be confident that there would always be something new when you fired up Siralim. The sequel, Siralim 2 ($4.99), hasn’t seen quite as frantic a schedule when it comes to updates. It appears that the developer is going for bigger, less frequent updates instead, which is fine by me. The latest one has just hit and it’s a whopper. 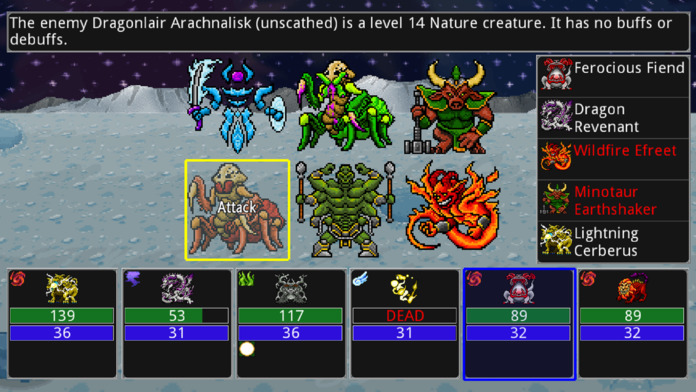 This expansion is called Trials of the Gods, and it is completely free. Those who have played Siralim 2 know that the gods play a major role in the game, giving you missions and rewards regularly. But maybe you don’t like those gods. Maybe you want to sock them right in their divine kissers. Well, friends, through the magic of this expansion, you can now do just that. Simply craft a key and bring it to the Gate of the Gods, and you can challenge any of the game’s 15 gods to a fight. It’s quite difficult, but should you overcome them, you’ll be able to transform your creatures into Avatars with unique traits and powerful spells.

This expansion also adds an Arcane Refinery system that allows you to modify the properties of your Spell Gems, removing or adding them as you see fit. Provided you have the required materials, of course. A Fortune Teller has also been added to the game. She’ll provide you with valuable information and long-term tasks to complete in exchange for the right items. There are also some new items called Fleshwarper Coins that you can spend on creature skins to customize your team. Some IAPs have been added to the game to unlock all of the skins immediately or increase the drop rate of the Coins, as well.

Of course, it wouldn’t be a Siralim expansion without a whole mess of new monsters, spells, and items. There are 60 new creatures in the roster now, all of which are located in the Nether Realms. To go with them, there are 60 new materials, 60 new cards, and 10 new Sigil races. A whopping 100 new spells have been added to the game, bringing the game’s total list up to over 300, and 13 new spell properties have been added in conjunction.

Apart from these major additions, there is a plethora of smaller balance tweaks, bug fixes, and other adjustments in this expansion. Basically, the game is bigger and better than ever, and if my review didn’t convince the RPG fans out there to pick it up, maybe Trials of the Gods will help do the trick. Now, go give those gods what-for!