State of Play Games has soft-launched a sequel to their hit puzzler Kami ($2.99) in New Zealand and Australia, appropriately enough called Kami 2. The gameplay has a similar core style, where you’re solving puzzles by essentially using a paint fill tool with the various colors in the game, trying to turn the entire board to one color in the prescribed amount of moves. Kami 2‘s big change is that the papercraft-style board is now a more isometric display, with the puzzles having some new tricks – both in terms of the puzzles and visuals – because of this angled perspective. 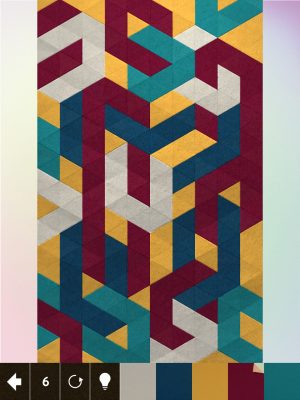 Kami 2 features 102 levels in its initial soft launch, but there’s also a daily challenge mode to play. For creative folks, there’s the ability to make your own levels and share them, with the daily mode appearing to be populated by the best created levels. Monetization appears to happen through hints, with various IAP packs for hints: 1 hint for watching an ad, $0.99 for 3 hints, and $4.99 will net you 30 hints. This appears to be State of Play’s first major experiment with free-to-play, and it’ll be curious to see how it goes. Check out the forum thread to discuss this one, and read our guide on how to download soft launch games.