If you play CCGs, you probably know the name Richard Garfield. If you don’t, all you need to know is that he is the game designer who designed Magic the Gathering and also had a hand in games like Netrunner, Battle Tech, and many, many more. Now we just got a drafting card game called Treasure Hunter ($0.99) designed by the man himself. Per the description on BoardGameGeek, Treasure Hunter is all about trying to grab as much treasure and coins as you can in the game’s five rounds. There’s treasure that isn’t treasure, though, so you have to be careful about what you’re collecting. You draw a number of cards, and then you pick one and hand the rest to the next player. You continue doing so until everyone has 9 cards. 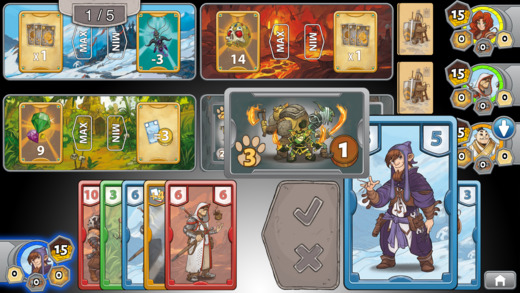 Depending on what treasures are available, you try to hold on to cards that will allow you to get your hand on the best treasures on the board. As with every drafting game, you try to simultaneously pick the best cards for you and mess with your opponents’ strategies. There are some other cards that let you take actions such as draw another card, defend your treasure, and so on. Treasure Hunter is a pretty entertaining game if you like casual drafting games.