It’s always interesting to see what kind of games follow when a novel idea hits big. The first wave is usually composed of shameless clones, but after everyone gets those out of their systems, you start to see some interesting, enjoyable twists. Earlier this year, we took a look at Dungeon Tiles (Free), a game that fused some light RPG mechanics into the core mechanics of Threes! ($5.99), adding an extra layer of tension to the swipe ‘n’ merge gameplay. Stencilsmith ($1.99) takes a broadly similar approach to that game, but also introduces crafting aspects to give you even more to do. The game has been out for a few months already, but it just recently got a great update that made me take a closer look at it. While it’s not much to look at and comes off a little rough in places, the added ideas it brings to the table makes for an entertaining twist on a favorite. 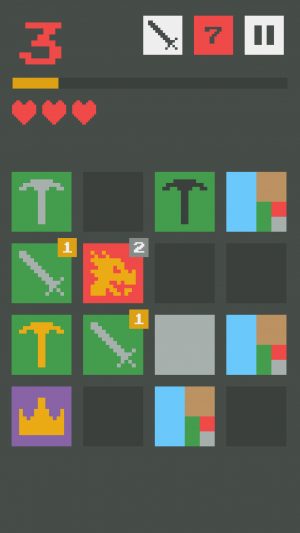 There are a few different gameplay modes in the latest version of Stencilsmith, but the basic mechanics are shared across all of them. As in Threes!, you have a board that fills up with tiles as you swipe up, down, left, or right. You need to swipe pickaxe tiles into land tiles to produce ore tiles, which can be combined with other tools to create items of various strengths. Monster tiles will occasionally appear, and if you swipe those into any finished tool apart from a sword, you’ll take damage. In most of the gameplay modes, if you run out of health, it’s game over. The game will also end if your board becomes too cluttered to make a move. Your goal is simply to reach as high a level as possible. Almost every action will earn you some experience, and when you fill up the bar, you’ll gain a level. Each of the four gameplay modes has a separate leaderboard in Game Center so you can compare your scores against other players.

That’s the simple explanation, but the particulars are a little more complicated. A blank pickaxe tile will produce iron when swiped into land. If you swipe another blank pickaxe into that iron tile, you’ll have an iron pickaxe. Swipe that into another land tile, and you’ll get gold ore. Run through the chain again, and you’ll get diamond ore. Pickaxes aren’t the only tools that can be combined with ore, however. The most important of the rest of the lot is the sword, which can deal damage to enemy tiles once it has been combined with ore. The better the ore, the more damage it will do. Each sword can only be used until it has dealt damage up to the number printed on the tile. More powerful swords can be used to destroy multiple enemies.

When you defeat a dragon, a chest and key will often appear. Combine the key with any type of ore, then swipe it into the chest, and you’ll receive a magic jewel. You can swipe swords into those jewels to make them even more powerful. You only get a set number of moves to open the chest before it disappears, though, so you’ll want to make sure you’ve got your ore and key lined up appropriately. Combining keys with better types of ore will give you better magic jewels, as well. Diamond keys will give you an item that will increase your health maximum. The last tool is the hoe, which will restore lost hearts when combined with ore and swiped into a land tile. Even enemies have their purpose in this little dance. Tools that are yet to be fused with ore can sometimes clutter the play area, making for the very real threat of a game over. Enemies will destroy these blank tiles when swiped into them, and you won’t lose any life from the exchange. 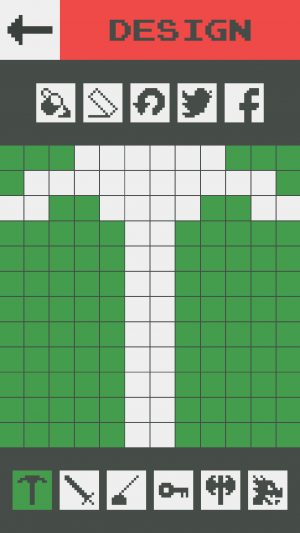 If that sounds like a lot to juggle, well, it is. The game gives you a couple of tools to assist you in the form of a preview of the next tile coming up and an indicator that lets you know when the next enemy tile will appear. You’ll need to pay careful attention to both of those if you want to make a good run of it. It’s also vital that you learn how to balance your tools and resources. Having lots of ore in spaces where your blank tools can’t reach it is of no use, and even the finest diamond pickaxe can’t help you if there’s an enemy between it and any land tiles. Stencilsmith is a fairly challenging variation on Threes!, but I enjoyed the way its various parts fit together.

There are four play modes in the game. The basic endless mode just has you surviving as long as you can, trying to get the highest level without running out of hearts or filling the board. The time attack mode has you racing the clock, with each monster defeated adding a little extra time. KingsGuard plays similarly to the endless mode, but with the additional of a special king tile that you must keep safe from enemies at all costs. Finally, there’s the Three M mode, which makes you invulnerable to damage but gives you just three sword tiles to use for the entire game. The trick here is to keep enchanting them with magic stones from defeated enemies.

As of its latest update, Stencilsmith features one other cool option, as well. You can use an edit mode to customize any of the tiles as you see fit. So if you want your pickaxe to look like a guitar, you can do that. If you want dragons to look like Carter Dotson, you can do that, too. It’s a fun extra, and I’m glad the developer included it. Other than that, the game is a little light on options. You can toggle the music, sound effects, and gameplay recording feature on and off, and the game does include a nice set of instructions and recipes you can review, at least. You can also toggle between a cleaner look for the tiles or a more pixelated set. The music can get a little repetitive after a while, so it’s nice to have the option to turn it off while still keeping the sound effects going. I had an occasional bug where UI elements would become unresponsive, and the swiping never feels quite as smooth as it should. This is also one of those games that doesn’t obey the mute button on your device, so be careful opening it up in polite company. 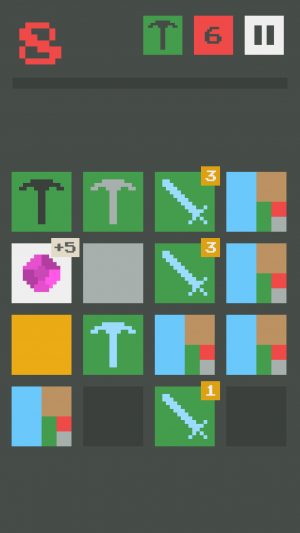 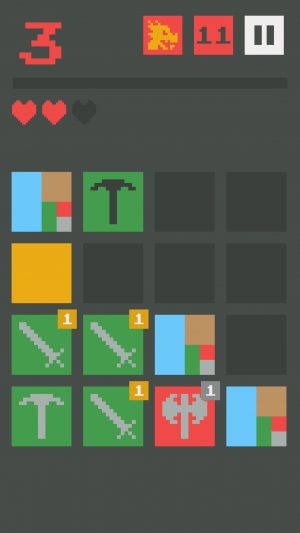 Those looking for something similar to Threes! will likely enjoy Stencilsmith‘s spin on the concept, especially with the additions brought in its latest version. I enjoyed the challenge of juggling all the various types of tiles, and having a selection of gameplay modes was quite nice. Being able to edit the tiles was a fun bonus, too. It’s definitely worth a try for anyone on the lookout for more games like Threes!, so long as you don’t mind that its design is slightly busier.