I hope you packed extra consonants and umlauts, because Stoic is back with Banner Saga 2($9.99). The epic journey has returned to iOS and with it new gameplay mechanics, new environments and new friends to see die in new and horrible ways. You’ve probably had enough time to get over the overwhelming depression the first episode was so good at instilling in you, I bet you’re ready for round 2! Come and join me by the fire while we still have some rations to share while we look deeper into this enjoyably sad sequel.

The Banner Saga series is pretty big, but if you are unfamiliar, you take on the role of a leader of a clan of viking-like people in a world where humans and giants(called Varl) have been beset by numerous woes including a sun that has stopped moving and a race of invading humanoid creatures(called Dredge) are driving large populations of folk from their land. If that wasn’t enough there is also a Kaiju sized worm casually destroying mountains and other geographic landscapes. Times are not great, and the story picks up with you basically chosing who the surviving leader of your clan is, either the brooding father Rook, or the young daughter, Alette. Being a dad myself, I chose to go with the character that wouldn’t be talking about his dead daughter, so Alette was the choice for me.

Gameplay is very similar to the first Banner Saga($9.99) , with some slight improvements. As you adventure, you face dilemmas that your stalwart band must overcome, through battles and decision making. Most of the time there is no right answer or even a safe answer. Your people will judge you every step of the way and the morale of your people directly affects how powerful you are in combat. The series boasts one of the most well-thought turn based tactical strategy systems I have ever seen. Each faction in a combat takes alternating turns until only one member of a faction is left. Dealing armor damage makes it easier to do damage to a character’s strength bar(which doubles as their health). Ultimately being outnumbered is of little consequence and sometimes leaving a weak enemy alive will give a much better tactical advantage than finishing them off. It worked well in Banner Saga 1 and works just as well in the sequel. 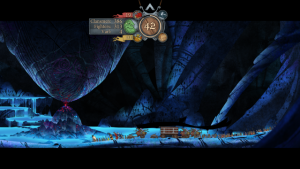 As you make good decisions and perform well in battle, you acquire the resource, reknown. Reknown is used to buy items, supplies, and rank up your characters. Using reknown wisely is a huge part of a well managed clan. When advancing your characters, talents unlock if you max out a stat. If you invest too much in gear and character levels, you might end up going hungry on the road and losing a lot of morale.

The star of the show for me is the berserk Varl Bolverk. His story is a little more fresh than the same old “try to survive and try not to be miserable" arc that the main group follows. He and his mercenary group are a little more wild and possibly insane. His combat ability is really something to behold as he tears through enemies extremely efficiently. I’m not sure if I just made better choices with him, but he’s kinda the crazy dual axe wielding silver lining to the rather dreary cloud of plot in the game. 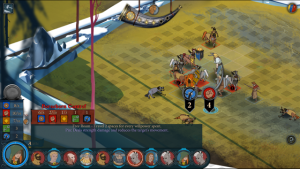 While my overall impression of Banner Saga 2 has been positive, I am afraid that currently there is a problem that has really impacted my ability to play the game. Stoic has already released a post-release patch, but there are still bugs that crash the game and slow down performance on certain game screens. The pre-fight and in-camp hero selection and customization screen, for example, becomes almost non-responsive in what might be a memory leak of some kind. I hope that this is something that is patched out because repeating crashes and lag really are not what I expect from an otherwise stellar set of games. Overall the game performs well and does not have a huge drain on my 6+. Yes, this is very playable on an iPhone but if you have an iPad, this is exactly the type of game you would want to get comfortable somewhere and just sit for a while.

Ultimately I have hope and faith in Stoic. If they can fix these bugs, Banner Saga 2 is going to be amazing. It already is amazing, but it just needs a little love. I can still recommend this game, but if you are on the fence you probably won’t have to wait long for the fixes to roll in. Even with it’s flaws, Banner Saga 2 fills the shoes of it’s predecessor and brings some very welcome touches to an immersive universe that never fails to suck you in and make you feel bad. In a good way.