Leap of Fate ($3.99) didn’t make a great first impression on me. The opening cut-scene dialogue is ponderous. The aiming feels a little off. The tutorial has a lot of clumsy navigation elements, suggesting there will be some shoveled-in platforming to break up the action. The first time I loaded the game, I played through the tutorial, wondered why Jared was raving about it so much, then switched over to something else. Of course, since I was assigned to the review, I had to come back to Leap of Fate soon. Reviewing games is generally a great job, but one of the few downsides is that you can’t always walk away from games you’re not enjoying. Sometimes, however, that turns out to be a good thing, and Leap of Fate is one such case. 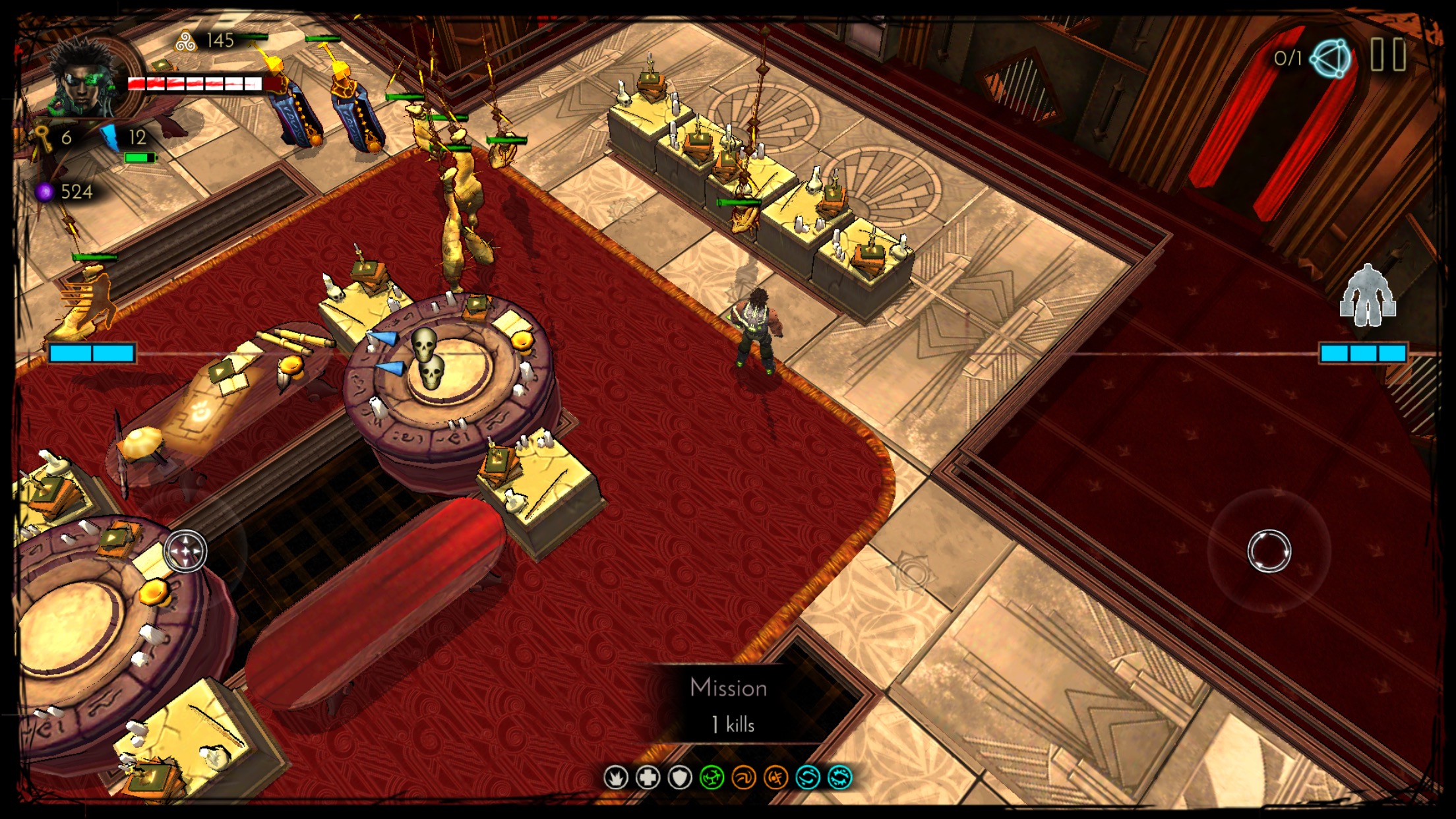 It didn’t take much time in the proper game for Leap of Fate to show its stripes. The goal of the game is to guide one of four characters through six stages of twin-stick shooter action. You’ll collect resources from fallen enemies that you can use to upgrade your character and unlock new special moves. Each character has their own story that will unfold as you play. This is far from a straightforward run-and-gun, however. For starters, it adopts a lot of the traits found in roguelites. Death is permanent, the composition of the levels and which bosses you’ll face are randomized, and you’ll never quite know which upgrades or how many resources you’ll have at your disposal. While you have the major goal of getting through all of the stages, much of the play is focused on smaller missions that help you unlock permanent upgrades and new characters. These missions often require you to play around with different styles, helping to add variety to the action.

The mix of characters also contributes greatly to keeping things fresh. While there are only four in total and you’ll have to unlock three of them, each of them plays so differently from the others that you’ll need totally new strategies for most of the enemies. The starting character, Aeon, is about as vanilla as you’ll get. His stats are average and he’s got a wide shot for his basic attack and his special abilities focus on direct attacks more often than not. Big Mo can take and deliver more punishment, but his basic attack can overheat and has a limited range. His special moves have high power and a very limited range, but one of them allows him to bait enemies, so you can do the math there. 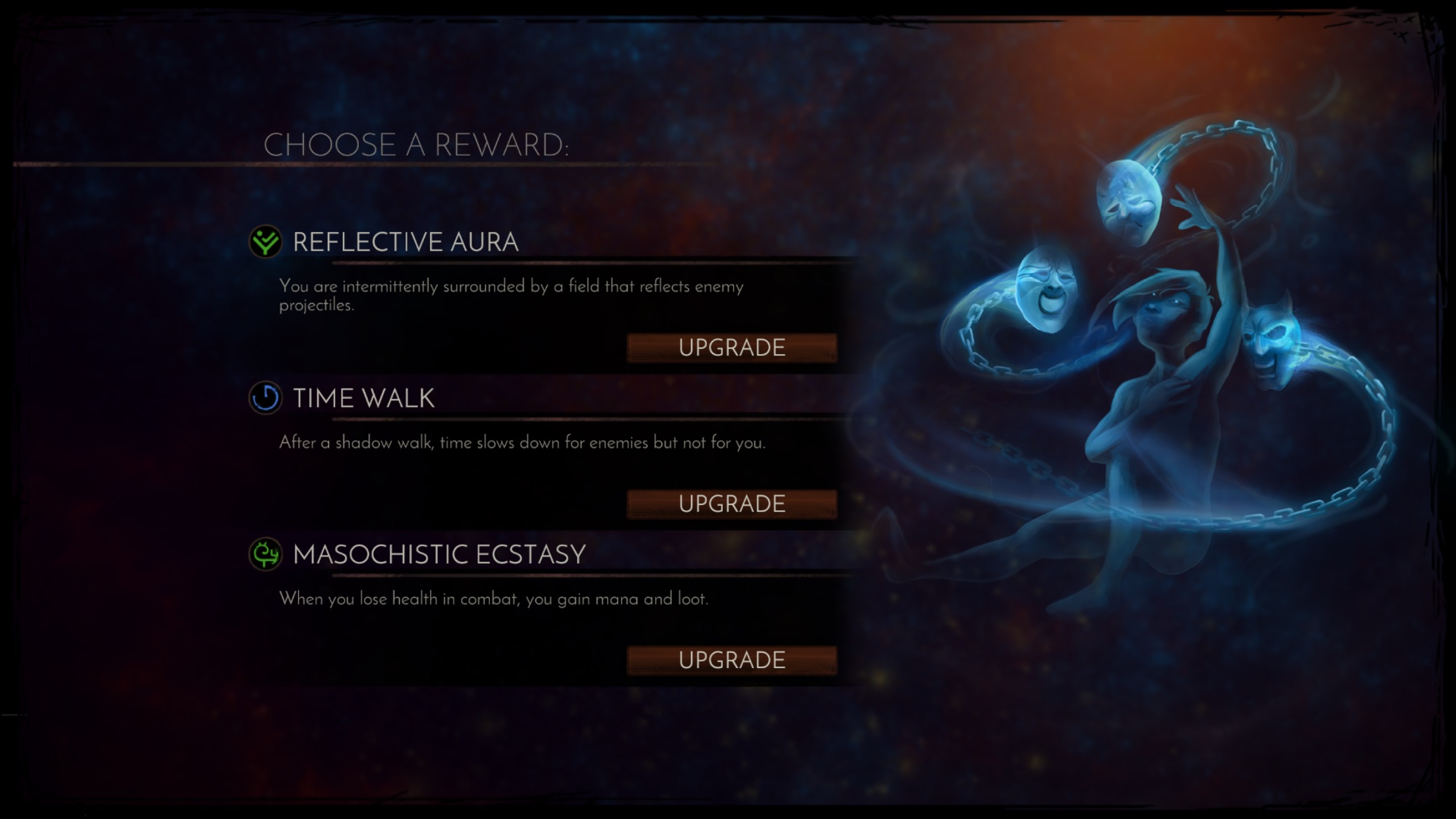 Mukai is fast and has little health, and to make things seemingly worse, she wields a katana rather than a gun. While her range is relatively short, she can be absolutely deadly. The katana can eventually deflect projectiles and by default is able to attack through walls. Her special moves generally stun or debuff the enemies in some way, leaving them susceptible to follow-up slice-and-dice attacks. Finally, there’s Rasimov, and he’s the most curious of them all. He’s completely unlike the other three characters. Powering him up requires a sacrifice of health, and rather than collecting mana and spending it as the others do, Rasimov harvests souls for health and upgrades. His basic attack spews deadly blood at various ranges depending on how long you charge it, while his special moves allow him to slow the enemy and trap them for heavy damage.

At the start of the game, it’s just you and Aeon, however. You’ll be given your sub-goals and thrown into the first stage. Each stage is set up as an arrangement of cards. Clearing each one will reveal the cards below it. You need to find the guardian card and defeat the boss to move on to the next stage, but you’ll want to make sure you’re finishing off as many of the cards as you can to ensure your character is capable of surviving harder challenges. Apart from Rasimov, your chosen character is going to need to gather up a lot of mana. You’ll get some for clearing combat stages, but you can earn more by using your special abilities to their fullest extent. This mana can be spent at any shops you uncover to purchase helpful items, or it can be used to pick up an upgrade from the skill tree. Those upgrades will stick with you until you die, but you won’t know quite which ones will be available to you and when until you actually start playing. 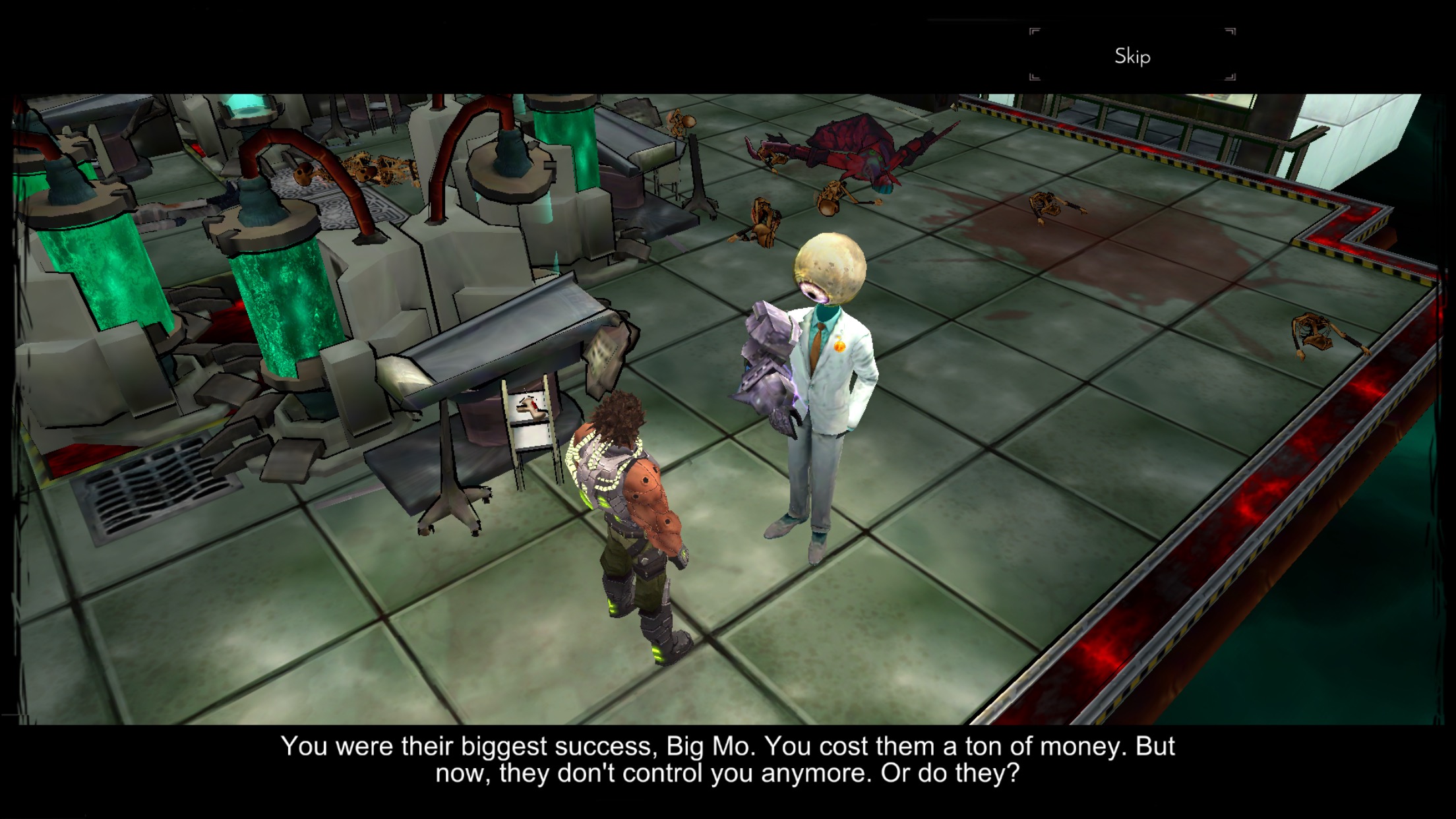 Other important pick-ups include keys for unlocking chests, health restores, and rare items that will extend your health maximum for the duration of the game. The shop will sometimes offer items that allow you to change the layout of the stage cards. They’re only moderately useful in the first couple of stages but prove to be lifesavers the deeper in you go. What will be offered to you is a matter of chance, but you’ll need to play skillfully to ensure that you can make the most of it. If you never use your special abilities, for example, your mana intake will soon be outpaced by the cost of upgrades. Maybe you’re good enough to not need them, though. This is certainly a game where skill can get you through even if you’re lacking in luck, but it’s a harder climb.

Even if you’re not quite as strong a player as others, you’ll nevertheless likely be able to make steady progress thanks to the missions. Each of the characters has a series of permanent unlocks that will help you out. You can open this up by completing a certain number of missions for each step. You’ll be given one or two of these when you start each game, asking you to do things like use that character’s special abilities in a particular way or collect a specific amount of something. They not only help keep the game fresh, but also allow the player to feel a sense of progression even in runs where things go sour. Maybe you didn’t get to an ending, but you took a few more steps towards the next big unlock, right? Most importantly, however, they’re a subtle way of teaching the player more advanced techniques and mechanics. The missions may ask you to combine special abilities in ways you hadn’t necessarily considered, or request something seemingly impossible, forcing you rethink how you’ve been playing. 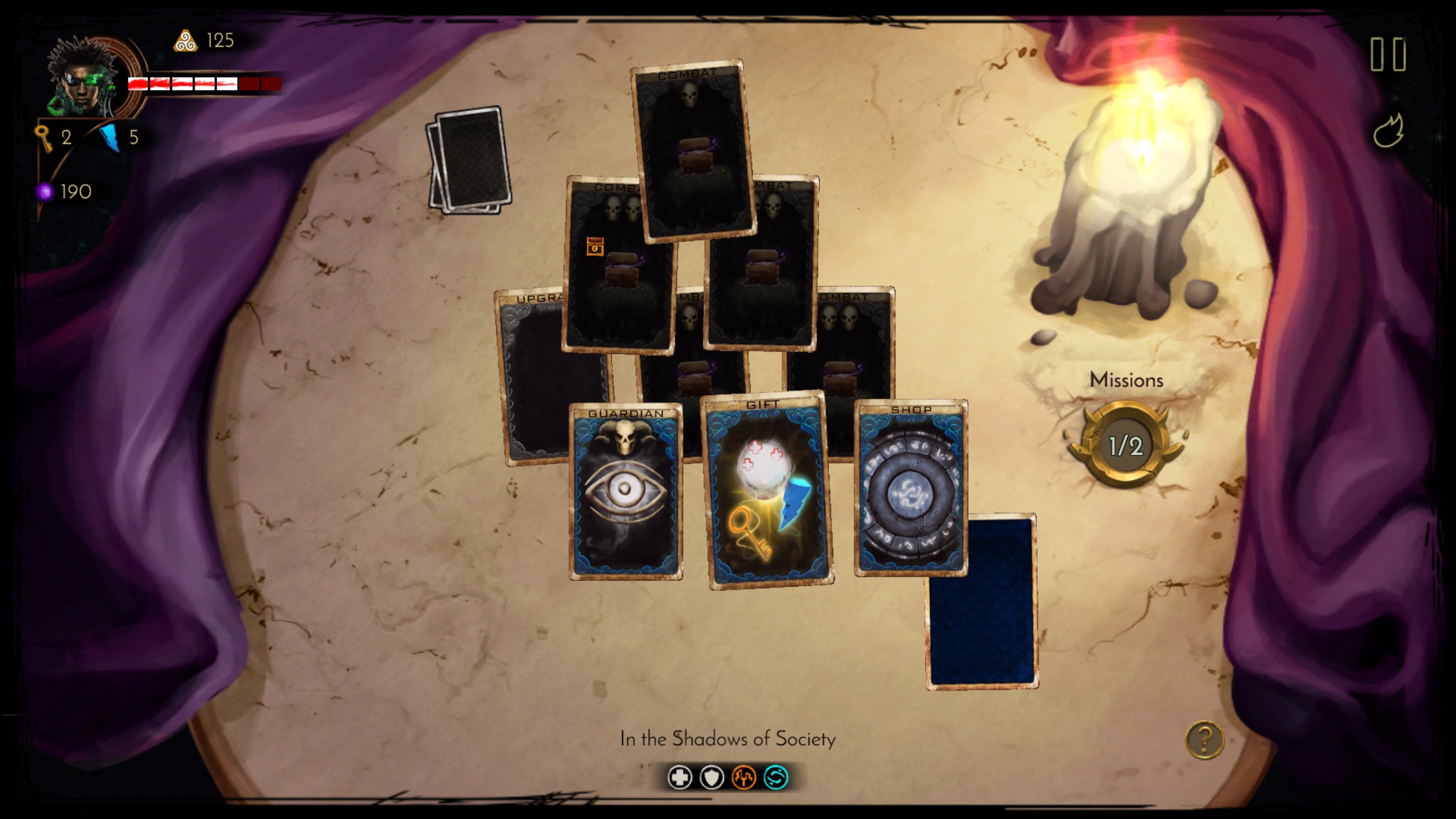 It’s a lot of fun, and all of the random elements, special abilities, and character playstyles make each run a slightly different beast. In one run with Big Mo, I was able to replace his default grenade ability with the ability to summon a Golem and was able to ride that to one of my most successful sessions. One of my runs with Murai yielded a ton of abilities contingent on the character staying at one health point. I danced at the edge of disaster for a lot longer than I thought I would be able to in that run, and it was an absolute blast. Throw in multiple endings and extra difficulty settings, and Leap of Fate will keep you busy for quite some time.

Beyond the extra systems layered on top, how much you enjoy the core action of Leap of Fate is going to depend on how much you get into using special abilities. As I mentioned at the start of the review, the aiming is a little stiffer than I’d ideally like it to be, so trying to snipe a target can be tricky. But I get the impression that you’re not really meant to get by on being a crackshot. After the first level, enemies swarm from too many directions for that to be viable. No, you really have to make the most of your special abilities to control the crowd and use the battlefield in the best way possible for the character you’re playing. When you learn how to put moves together for the biggest impact, that’s when Leap of Fate will really get its hooks into you. From that point on, every new enemy behavior, every new glyph ability you find, and every little upgrade will change the board in satisfying ways.

There are a few other systems and gameplay aspects I could get into, but this review is already running on the longer side, so I’m going to wrap things up here. Other pertinent information: it has a great set of Game Center achievements, there isn’t any support for MFi controllers, there are no IAPs at all, and the game pays no attention whatsoever to the mute switch. Performance is good on the newest hardware, but it can be spotty on anything else. The controls work nearly perfectly outside of the slightly rigid aiming, with your special abilities assigned to screen sections safely nestled above the dual virtual sticks. Special abilities slow down the action, giving you sufficient time to point or tap whatever needs to be targeted.

Leap of Fate is a very good arena-based twin-stick action game that layers on plenty of fun extras. It might not click with you at first, but I encourage you to give it some time to roll out its spread a little. I’d love to see MFi support added, and the aiming could use a little refinement, but on the whole, this is one of the more enjoyable action games I’ve played on iOS so far this year. If you’ve been looking for a premium action experience on your mobile device, I’d recommend taking this leap.