Hello, gentle readers, and welcome to the RPG Reload, the weekly feature where we sometimes accidentally call Jenny when we want to play a roguelite. Each week, we take a look at an RPG from the App Store’s past to see how it’s held up over time. It’s a chance to revisit the classics, reflect on their place in the overall tapestry, or simply to take a deeper dive than our reviews typically allow for. As the captain on the bridge, I try to choose a balanced selection of games from week to week to reflect the diversity in the genre. If you feel like I’m missing anything, you can let me know by commenting below, posting in the Official RPG Reload Club thread in the forums, or by tweeting me at @RPGReload. The schedule is planned pretty far in advance, so you might not see your suggested title soon, but it will be added to the master list. 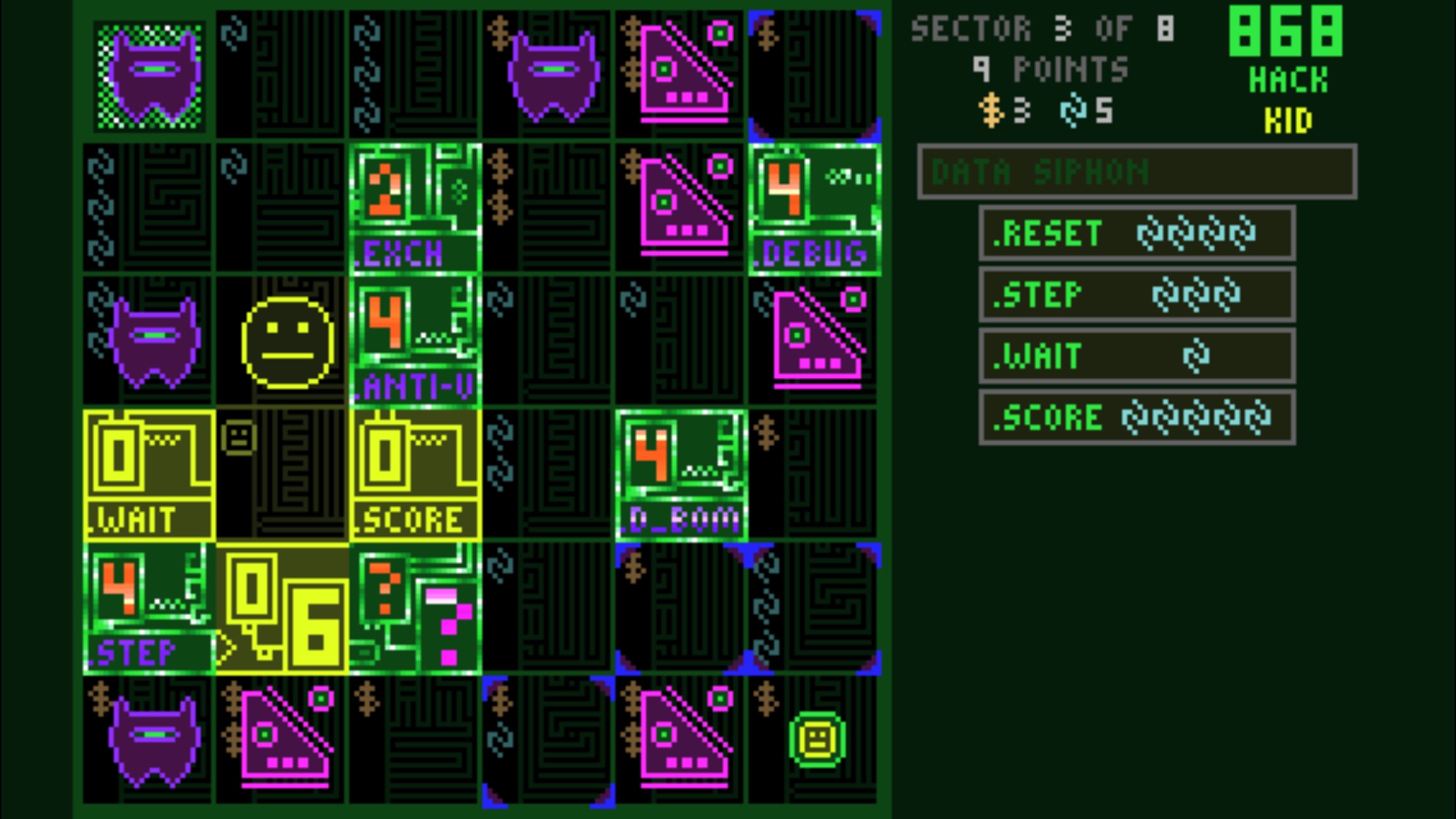 Okay, yes, I know. 868-HACK ($4.99) isn’t really an RPG at all. It’s fairly abstract even taken as a roguelike/lite. Allow me to present my case. First, like many roguelikes, within each game your character does indeed become more powerful and gains access to new abilities. Second, I needed something light on the schedule to juggle during my half-vacation. Third, I just wanted to write about it. So here we are! Honestly, in spite of its bizarre look and initially confusing mechanics, I think 868-HACK‘s focus on turn-based strategy and balancing advancement against risk hold a lot of appeal for RPG fans. It’s the perfect thing to keep on your device for those times when you can’t dig into something bigger.

868-HACK is the creation of Michael Brough, a developer known for producing games with unique aesthetics and tight, if sometimes opaque, mechanical designs. If you spend a couple of minutes with a Brough game, chances are good you’ll come away feeling bewildered and perhaps even a bit repulsed. Spend a few more minutes, and you’ll probably find your curiosity being piqued. A few minutes, and you might very well be hopelessly hooked. At least in iOS circles, 868-HACK is Brough’s most famous title, launching on the platform in August of 2013 to generally strong praise. Like many of Brough’s projects, 868-HACK started off as a smaller idea, in this case developed for a seven-day roguelike challenge. Afterwards, he expanded on the game for its eventual release on iOS. In January of 2015, he brought the game to Steam, where it enjoys a highly positive rating in spite of the stigma that usually affects mobile ports. 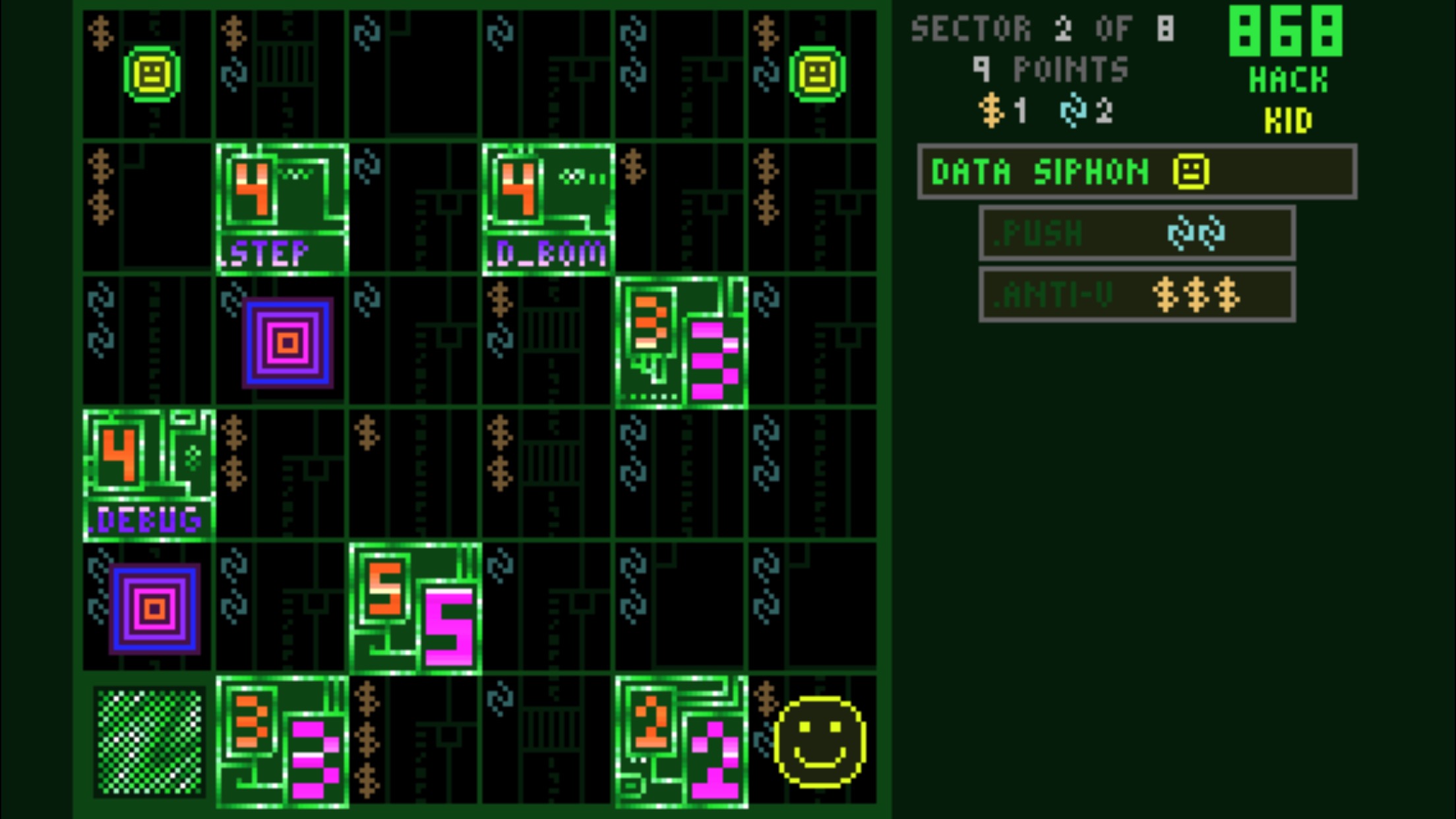 Like most of Brough’s games, 868-HACK is both streamlined and incredibly dense. Its design makes incredibly effective usage of a single-screen board to the extent that many other games feel positively wasteful in comparison. You’ve got a six-by-six grid whose cells are occupied by resources or programs, an exit that will take you to the next stage, your main character, and whatever enemies have spawned. Your primary goal is survival, of course, but you’ll also want to collect as many points as you can along the way. While you have some basic offensive capabilities, you’ll certainly want to add some additional measures to your arsenal. Both points and new programs are earned by using a data siphon from an adjacent cell. You’ll need resources to power those programs, and those can siphoned from just about any unoccupied cell. Data siphons are a limited resource, so you can’t just go around siphoning everything. Which do you need more, a program to help fend off some viruses, some resources to help you power the abilities you already have, or some points towards your ultimate goal?

There’s another twist to siphoning those program/points blocks, however. When siphoned, each of those blocks will spawn a number of enemies equal to the orange number on their display. In the case of points blocks, that number will typically equal the number of points you earn by siphoning it. So if you want to rack up big points in one go, you’d best be prepared to deal with the consequences. You can only take a few hits in a row before getting a game over, which means your positioning is absolutely critical if you’re going to spawn enemies. Exiting a level restores one point of your health, and one of the programs will let you heal for a cost, so as long as you don’t get cornered, you do have options. Other considerations: there are several different types of enemies, and they each have their own traits and behaviors to learn. Glitches will come right through walls to get at you. Viruses can take two turns for your one. You have to know these enemies by heart if you want to survive. 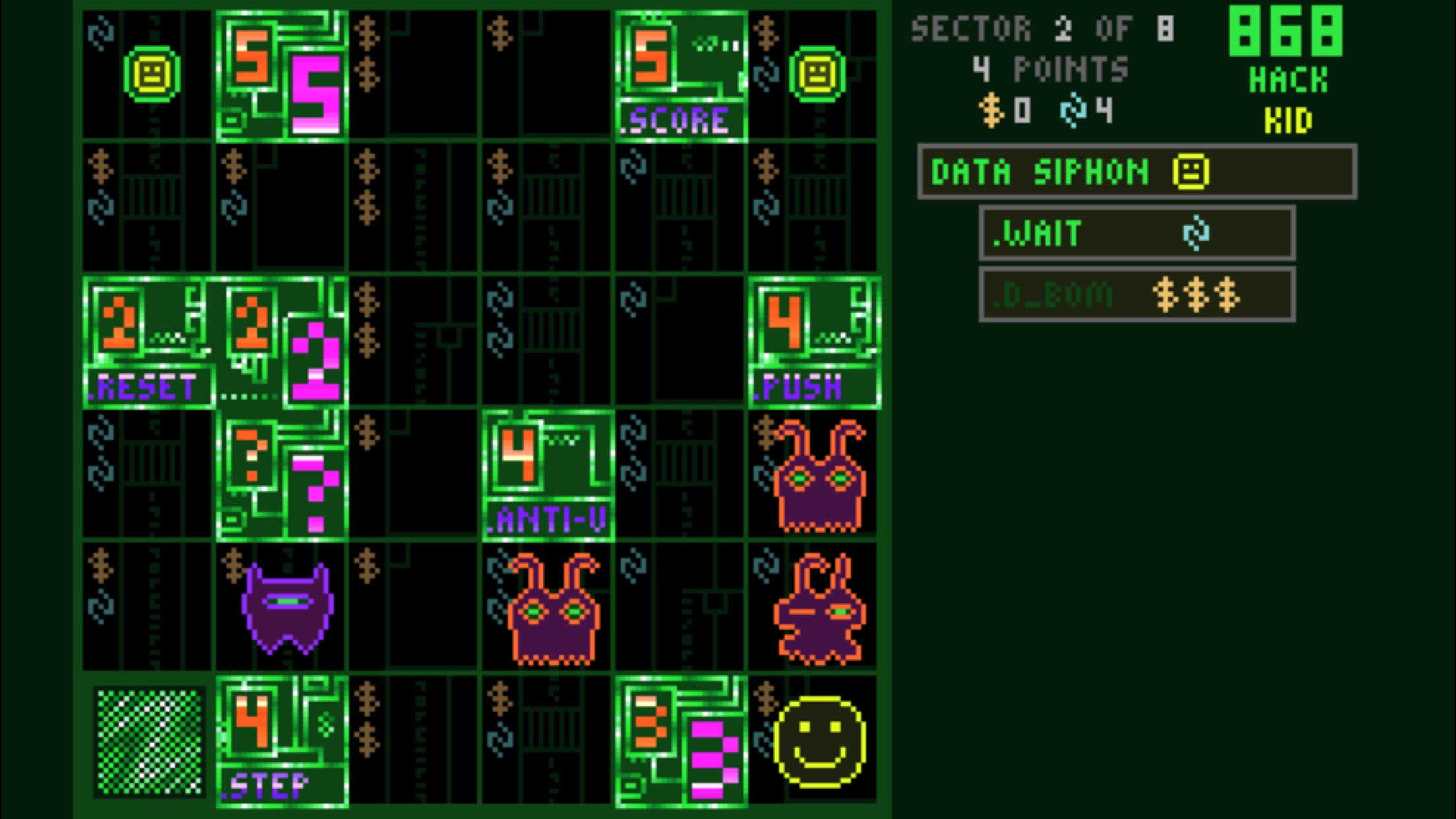 Even exiting the stage won’t save you, however. While you’ll get back a health point and reset the resources, the enemies will stay just where you left them. No, if you choose to spawn eight opponents, you’d best be ready to deal with them. There’s no running, at least not for very long. That’s one of the reasons why every single move you make in 868-HACK is so critical. Every aspect of the design helps reinforce that. You can only collect a set number of siphons, so you have to think carefully about where you want to use them. Having programs and no resources to use them is worthless, but so is the opposite. If you only go for points and not programs, you’ll be ill-equipped to survive in the long run, but who knows? You might just make some impressive headway in the short-term.

The siphons are a scarce resource, but there’s one other limited resource that you need to keep in mind. You see, there are only eight stages. Once you’ve completed them, your score will be set, and you can continue on to the next loop. The game maintains leaderboards for both a single run and streaks, so they both matter, but if you didn’t get the point from everything else in the game, the rather small number of stages per run draws a bold underline under the game’s theme of making the most of limited resources. That’s essentially the heart of many games, but it’s presented very purely here. The set number of siphons per stage means you’ll need to keep moving if you want to earn more points, get more resources, or open up new programs. The set number of stages means that each one of those siphons is precious, and as a result, you should think very carefully about how you want to use each one. 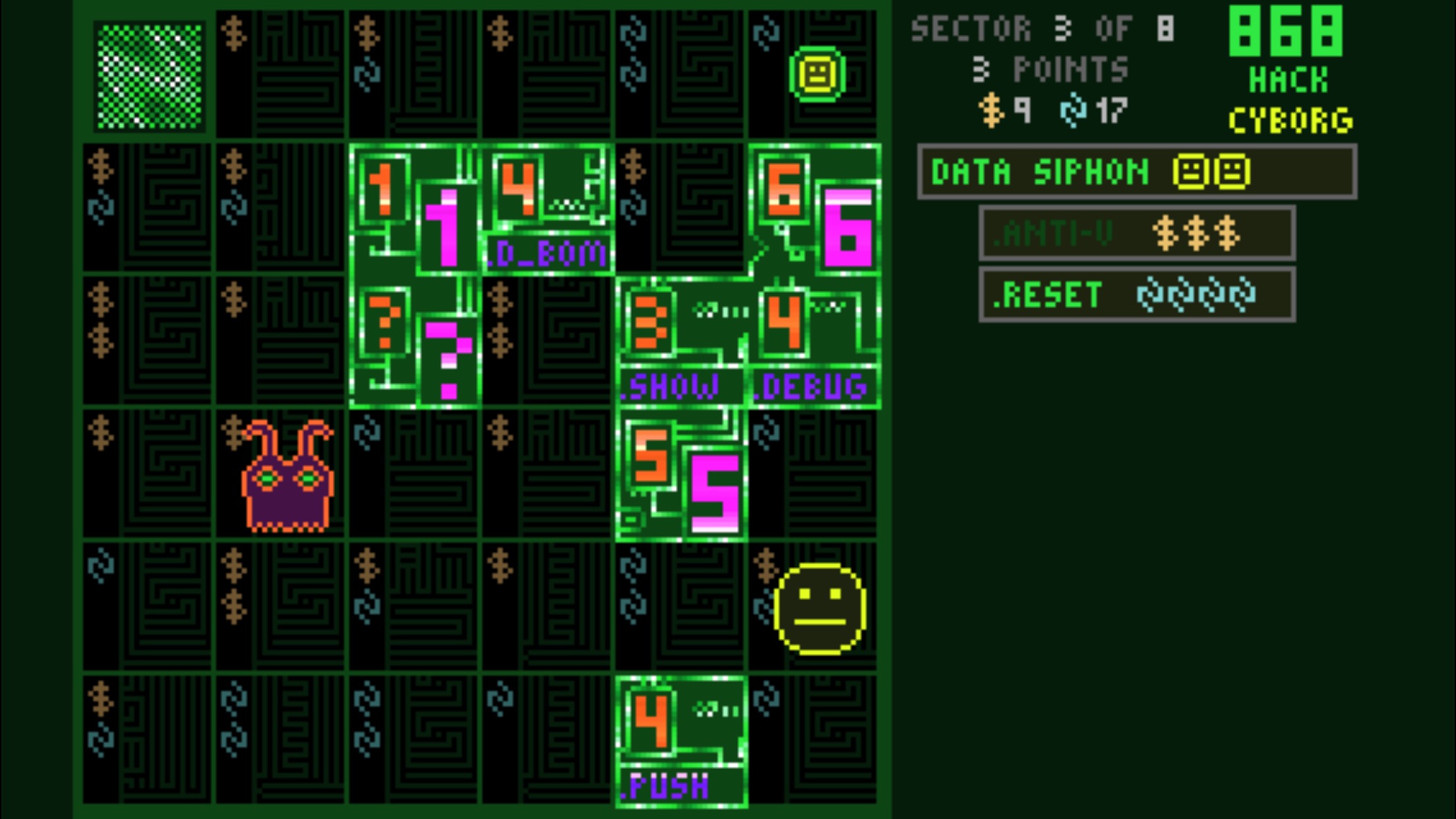 I’ve read various writings on 868-HACK and have seen it compared to both Pac-Man and chess. Both seem apt. As in Pac-Man, your character is generally outnumbered and overwhelmed, but is able to do some serious housecleaning now and then. You need to think carefully about the board layout, how the enemies behave, and where you’re going to meet them as a result of each move. That’s true for Pac-Man, but we’re also now bleeding into chess a little. You wouldn’t think you could bridge those two games and come out with something coherent, but 868-HACK does a fine job of that. What you get in the end is a game that requires long-term planning but executes in matter of minutes. Some real food for the brain.

Of course, I can explain all of this to you because I’ve gone through the experience of learning 868-HACK. While there is a tutorial in the game, much of how it functions is left to you to discover. Depending on how you like your games, this makes the initial experience of playing the game either frustratingly esoteric or an exciting journey of discovery. The great thing about replaying it is that no matter which camp you fall into, you’ve probably already learned it all and have now settled into the phase where the game is just a fantastic thing to poke at. I call this a replay, but the truth is that I’ve never really stopped playing 868-HACK. Like Threes! ($5.99), it’s just one of those games that is perpetually on my device, waiting to be loaded up in the cracks and crevices of my daily life. 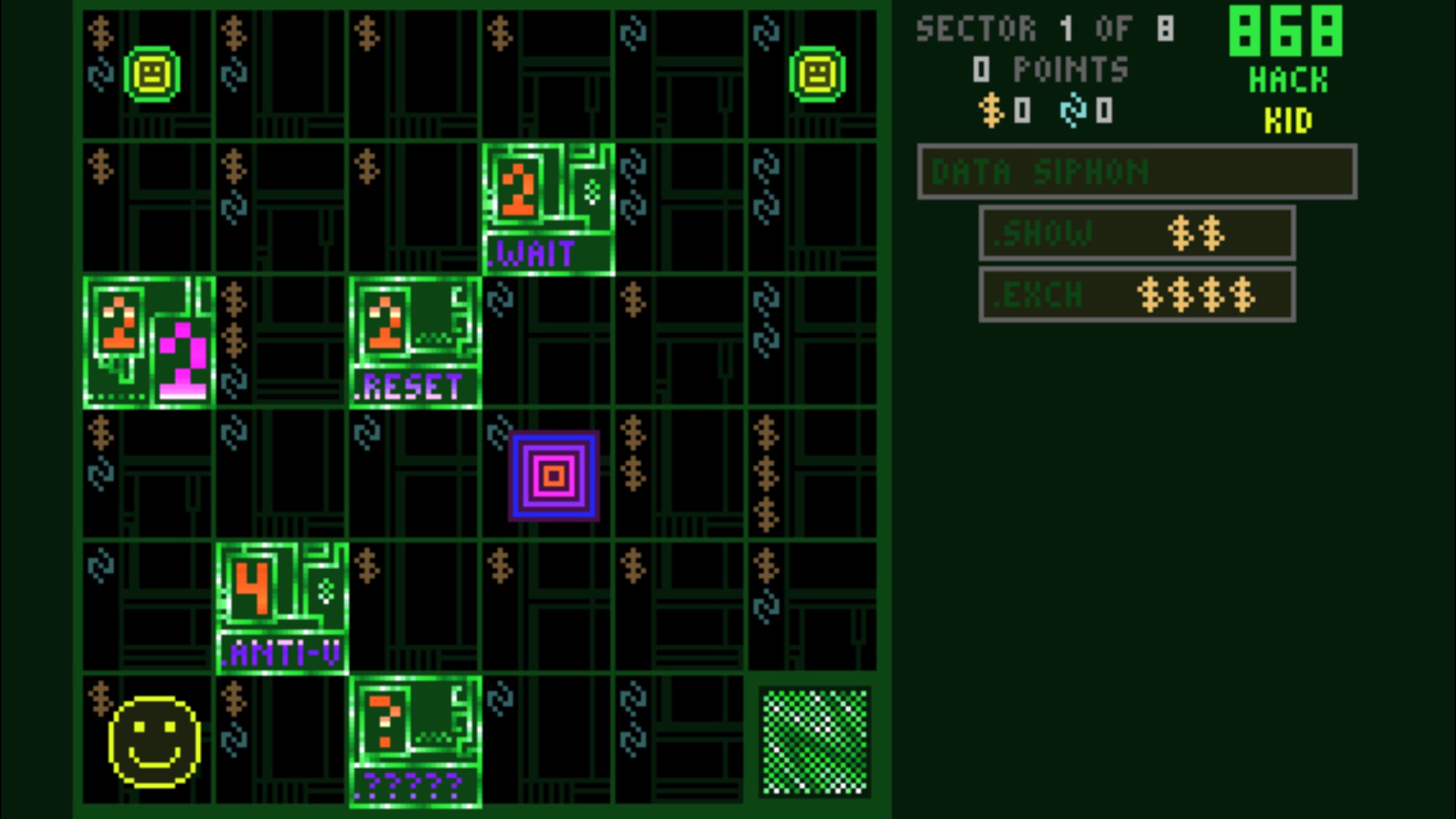 If you’re put off by the game’s unusual visuals, push through. If you don’t like the odd hacker motif, push through. If you’re irritated by how obtuse it seems in the beginning, push through. Just push through it all. There’s a great deal of sense to it all in the end, I promise, and when those pieces start falling into place, it’s hard not to admire the clean, clever game design of 868-HACK. The deep strategy that emerges from what are, ultimately, relatively simple core mechanics is like manna from heaven for system-focused RPG fans, even if 868-HACK itself falls outside of the rope fence of the genre.

That’s just my take on 868-HACK, though. What do you all think? I want to know, so please post comments below, drop by the Official RPG Reload Club thread, or tweet me at @RPGReload. As for me, I’ve enjoyed the last couple of relatively light weeks, but I’m coming in hard next week with one of Japan’s all-time classics in the genre. We’ll see you then, and thanks for reading!