Finally, Blitz Breaker ($2.99) is home where it belongs. After initially getting released on PC, Reece Kelly’s fast-reaction platformer is on mobile. It’s always felt like a perfect fit for phones in particular, what with the ability to simply swipe in the cardinal directions to launch your hero that way. Sure, it works perfectly fine from a keyboard, but it was easy to imagine doing all this with a thumb on a touchscreen. Lo and behold, it works beautifully.

So, your hero can launch quickly in the cardinal directions, and won’t stop until they hit something. Preferably, this ‘something’ is hopefully just a wall instead of a more deadly object, because spikes, bombs, and buzzsaws are out to ruin your day. You can also jump by tapping on the screen, which is a move that becomes necessary at certain portions. Like, when you’re riding a conveyor belt and just need to hop from one to another, or you’re on a sticky wall and need to jump off. But otherwise, the game does a lot with its simple set of mechanics. 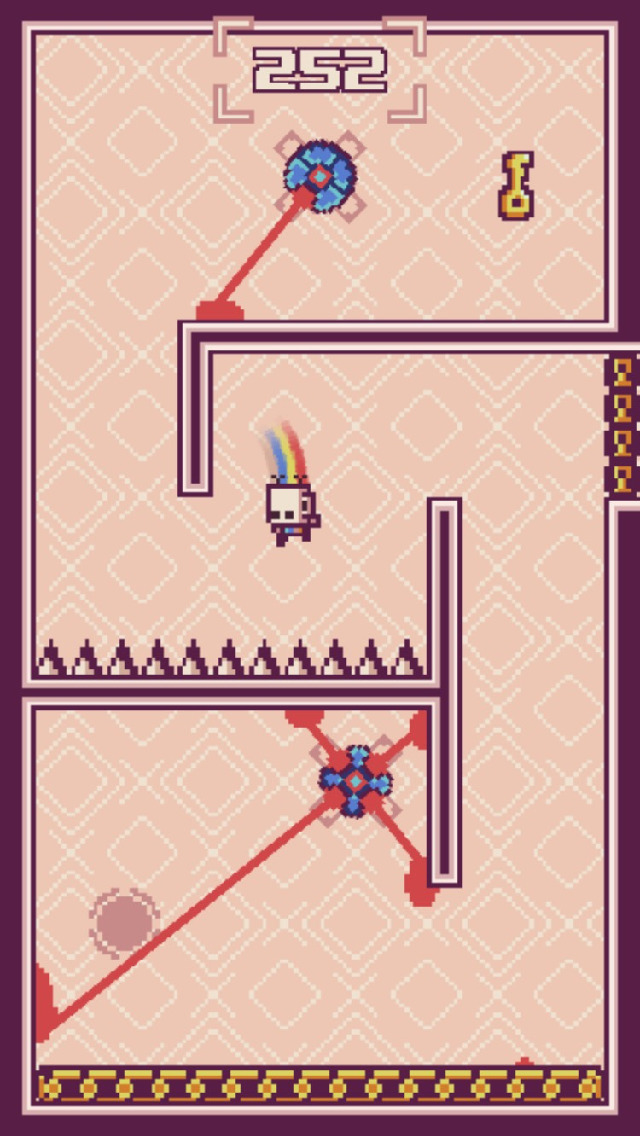 It’s kind of tough to write about Blitz Breaker because the game largely nails what it’s going for. Simple, mobile-friendly controls, with a structure that is friendly to short sessions is a winning combination. It just requires that the developer stick the landing, and Reece Kelly didn’t screw it up. The game feel is important, and this allows for the quick reactions necessary to do well. And it tests you all the time, with difficult sections that keep popping up throughout the game’s many levels, with 101 stars in total to collect. Obviously, Blitz Breaker will work best for you personally if you’re into the whole “die many times and keep trying" concept that this game lives by. Death by the dozen has to be an acceptable situation to you. Especially as you get further in the game, where timing windows shrink and new hazards start to pop up.

The completion-minded will not only have the stars to get, which are basically rewards for completing levels quickly and for getting the coins that add to your timer. There’s also the pink squares, three per set of 9 levels, that unlock a warp zone with 3 levels with additional stars and a higher degree of difficulty. These not only are necessary for 100% completion, but also unlock some exclusive characters that you can play as. The characters are just cosmetic changes, but there’s some cool designs in there.

Blitz Breaker sadly proves that underwater portions in video games should be banished by the International Criminal Court. They’re not terrible here, but they slow down the pace of the game, where the fun is in making quick moves and squeezing through narrow corridors. Pretty much any moment where the game uses waiting and inaction feels a lot less fun than the fast-reaction parts. Perhaps they’re necessary to make the fast parts feel better, but I found the water portions to be where this game kinda started to lose me. I have a tendency to quit some of these games in frustration, but the middle portion of this game really was where my progress slowed down. The boss fights at the end of each world are interesting little changes of pace that fit well into the game while also being something quite different.

Blitz Breaker is a stylish game, with a gorgeous faded hue to the whole game that gives it a nice, modern look, albeit with pixel art. The only issue I have with the game is that it looks like it isn’t running quite at Retina resolution and is being upscaled, so it doesn’t look as nice and clean as it possibly could be, at least on the iPhone 6 Plus that I mostly played on. I don’t know if there’s a great solution for this, as it would shrink the game view on devices, perhaps. The solution is to get over it and eat your lemons. The music by Fat Bard is worthy of note, providing chiptunes that go well with the action. The music isn’t explicitly necessary to the game, but it’s a real treat when you do crank it up and/or have headphones on, so do that.

I can find a few faults with Blitz Breaker for sure, but for the most part, it’s a cool concept at its core, and minus a few unnecessary frustrations, the game is worth checking out. The game is just challenging enough that it will test you and make this a lengthy experience, but without being over the top difficult. Getting all the stars will be a challenge. Trying to complete the game with limited lives in the Arcade mode is a completely different beast. At least that mode doesn’t have to be completed in one sitting, you can quit and return to it later. I do wish this game had hit mobile sooner – the sales numbers seem to indicate my hypothesis that it would be a superior fit on mobile – but we have it at last. If you want a great one-handed mobile platformer that will test you, check out Blitz Breaker.