One of the unique elements of mobile is that because people have their devices with them constantly, game design has taken on a new element of trying to fit into people’s lives. Phoenix 2 (Free) feels like the idea was to provide an intense shoot ’em up experience that could be more than just an occasional distraction, but a game that could fit into someone’s life. And in that regard, it succeeds: it’s a unique experience that works best on mobile because it’s built for the platform, while still being a fun bullet hell shmup experience. 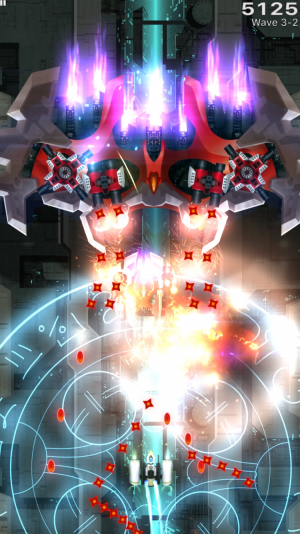 The idea behind Phoenix 2 is that everyone in the world gets a unique level that resets every 24 hours at about midnight GMT or so. The levels are different each day, but the level for that day is always the same, and you’re trying to advance as far as possible. So, you can learn what the enemy patterns are going to be that day, and over time, you’ll catch on to what the various enemies are like, but the important thing is figuring out what is happening specifically on that day. You’ll want to get as far as possible, because you get more money the further you advance, which can be used on upgrading your ship. I love this whole daily play structure, and think more games need to do what something like this and Leap Day (Free) do. The issue with Leap Day to me is that it’s such a daily time investment. Having only the need to play a few minutes to get a good session in with Phoenix 2 makes it much better to me as a pick-up-and-play title. In fact, that’s what I’ve been doing since getting early builds around when the soft launch happened, I’ve been playing at least a couple times a day. Maybe I get further some days than others, but the open-ended nature of Phoenix 2‘s challenge is perfect for me. And for some of y’all, it might be a good fit for you! But regardless, if you want something to play once or twice a day, you have that, but if you want to obsessively master a new challenge every day, you can do that too.

There are two big changes from the original Phoenix (Free) here beyond the new focus on daily missions. Phoenix 2 is far less forgiving, because one hit kills you, as opposed to having lives and shields as in the original! So yeah, get ready to die a lot, and to have any mistake be punished. You will need to learn how to dodge bullets by squeezing through small gaps in enemy patterns, a challenge that magnifies as the game scale gets much bigger, and that dot gets smaller. You do have a variety of new special attacks to deploy, based on your ship of choice. 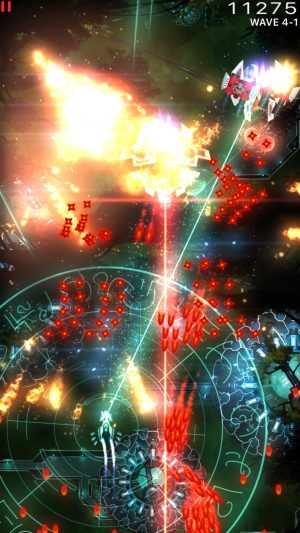 The other big change is that the structure has been revamped. The focus on local scores has been replaced with the daily leaderbords, as well as the Where in Phoenix, you could test drive ships and buy them for a small fee, here the monetization is more like Crossy Road (Free) in that every 12 hours or so, you can open up a warp gate and get a new ship. As well, you can upgrade the ships with the money you earn, or can buy. If you want to own a particular ship, you can pay a certain amount of coins to earn it, but just by checking twice a day, you can get a good lineup of ships, all with different weapons, and special abilities. The game has sadly abandoned the really cool local leaderboard element, but with daily missions and the new community mission, where you can get rewards for people in your community (be sure to join toucharcade, all lowercase!), makes up for this. The community mission is a great addition, as it allows you to change up the pace from the daily mission if you still want to play, but don’t want to keep pushing on the daily mission in particular.

The different ships mix up the experience quite well as each ship has different properties. The primary weapon differs, with shots like a straight laser that occasionally needs to recharge, spread shots that are slow but hit a lot of targets, and so on. Then, there’s the special ability, charged up by collecting the glowy bits that dead enemies leave behind. These abilities range from the defensive, like bullet cancellation and enemy stuns, to more offensive weapons such as auto-targeting lasers or missiles. Then, each ship has some kind of ability that’s either passive or is charged by doing nothing. Like, a glowy-bit attractor that can be really helpful when the bits are in dangerous spots. The offensive abilities are high-risk because of their long charge times, but often worth it if you can pull them off without dying. Good luck with that, but fortune favors the bold. 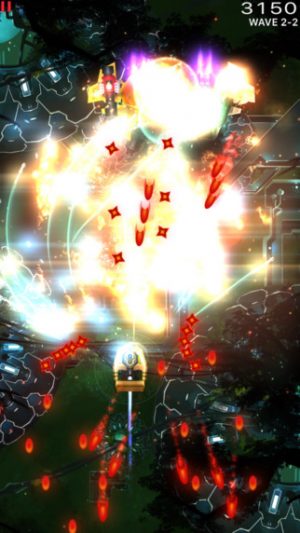 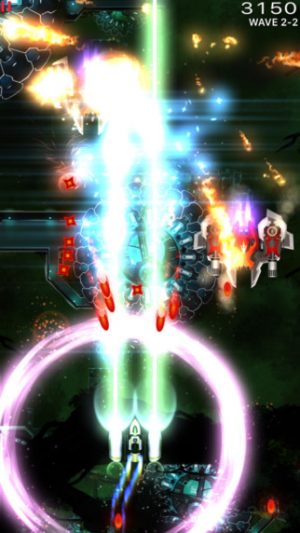 You can upgrade each ship with the coins you earn on a daily basis, but the number of coins you earn is inherently limited by the daily mission format. You get more coins for each new level you beat, with a reward for performing well when the day switches over. But there’s no way to grind for coins, which can be annoying to a certain degree. It’d be nice if you could get a coin or two for reaching a certain wave each time, which might help if you just need an extra coin or two to buy a new upgrade. But the coin payouts are otherwise rather reasonable, as you can upgrade your ship regularly. And the ship upgrades really aren’t pay-to-win – they’ll give you an edge, but each upgrade is only a slight improvement. This means you can experiment with ships and not feel like you’re failing because of poor upgrades, necessarily, and it also means that even the $4.99 IAP can go a long way for you. It’s a system that feels friendly, but I think that Firi would do well to perhaps have a video ad to earn a few coins, perhaps, as it doesn’t seem like there’s anything necessarily making money for them beyond buying coins.

Phoenix 2 uses perspective as a clever trick to help pick up on the action. Your ship starts off rather large, as are the enemies. But with each new act, the game zooms out a bit. You might not even realize it unless or until you realize that, wow, there are a lot of bullets on screen. And that dot of your engine is barely visible now. It’s a well-done effect, and helps to make things get to a level where there’s a glorious level of chaos. What this also means is that Phoenix 2 can scale up and provide intense challenge. And the problem there is that since one screw-up can ruin a great run, it can be particularly frustrating. It gets easier to cover up your ship with your finger the further you go, though the 1-to-1 controls work well enough from a functional standpoint. Play this on an iPad if possible. You can sync up your progress between iPhone and iPad with a proprietary Firi Games account, but it works perfectly. Also, the tutorial at first launch is skippable. Thank you, Firi – I despise unskippable tutorials in games that support cloud synchronization. I would love two things from this game, controls-wise. First is MFi controller support. It might not make much sense on iPhone, but on iPad it would be great. The other is the ability to play entirely one-handed – you have to use two fingers to deploy your special ability, and if you had some method of doing so without having to use your other hand, it would make this perfect for commuting, or just super-casual play. Update: As the developers and commenters have pointed out, if you have a 3D Touch device, you can that to trigger your special ability without having to use multitouch. Guess that’s what I get for not upgrading to the 6S.

I can see a few key aspects where Phoenix 2 could really improve in order to be a better experience, or at least are shortcomings that are tough to adjust. But regardless, the core concept behind Phoenix 2 is great, and it does a great job at being a game worthy of playing daily.