We have been inundated with weird, wacky and wonderful stories related to Pokemon GO (Free) ever since it became a national phenomenon in every single country it has been released in. Whether that is people using drones to catch Pokemon from afar, or the Westboro Baptist Church using the app in an attempt to further their hate-filled agenda, it seems there is always something or someone trying to push the boundary for crazy stories related to the ridiculously popular iPhone game. I believe the internet was at its zenith today, as following on from the format of 2014’s Twitch Plays Pokemon, there is now Twitch Plays Pokemon GO. I can’t believe it either. Check out the Twitch stream in all its glory here.

Twitch Plays Pokemon GO uses the same comment based command system as the original Twitch Plays Pokemon series where the users watching the stream decide – based on number of votes for each command – what the player does next through posting a comment in the chat box (here is a cool explanation for anyone new to the concept). This works fine on a Game Boy title which has seven inputs, but to adapt it to recognise touch inputs, the developers have had to divide the screen up into numerous different squares (from A to K on the x axis, and 1 to 19 on the y axis) which all represent part of the screen to be touched. Other commands such as moving, throwing a pokeball and scrolling are all handled by their own individual commands. The Twitch stream also details how the game is using a ‘spoofed’ location to make it seem like the player character is at Central Park. Whether this means Niantic or Nintendo will ban the user – as this is against the rules – it is still to be seen. However, it does mean you won’t be bumping into a confused and erratic Pokemon GO player, being fed commands via strangers on the internet in New York, anytime soon. 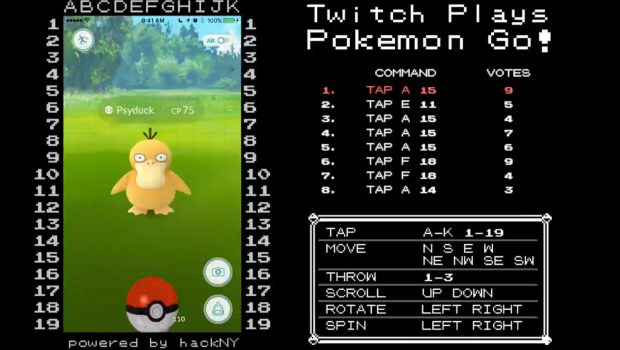 There is no telling how long this will last, especially as it doesn’t appear to be affiliated with the official Twitch Plays Pokemon series. The complex nature of the inputs also suggests it will not necessarily strike the same anarchic charm of the original and attract similarly huge numbers of fans. However, this doesn’t stop Twitch Plays Pokemon GO from being an absolutely incredible thing to witness. Within a few minutes I saw the collective masses of the internet catch a Rattata through the app, and in the spirit of Pokemon, I almost hurt myself from confusion and laughter. Definitely give the Twitch stream a look while you still can, and share your admiration or bewilderment in the comments or on our forums.