From the moment the first details on Tap My Katamari (Free)were released, the overwhelming sentiment seemed to be that this game shouldn’t be. The original Katamari Damacy was a small, creative, sincere game that somehow managed to become a big hit even though such qualities don’t generally lead to success in the console space. Seeing the brand used for a fairly blatant attempt at getting a little cash from one of the mobile flavors of the moment just doesn’t seem right to some people, and I can certainly understand that point of view. From where I’m sitting, the Katamari brand started being used against its original intentions almost immediately, with sequel after sequel only serving to diminish the power of the original. So, personally, I’m not disappointed because I think Tap My Katamari shouldn’t be. I’m disappointed because Tap My Katamari shouldn’t be this mediocre of a tapper.

It’s easy to see how someone at Namco hit on this idea. Katamari Damacy would make a really good tapper, if it were done correctly. The basic concept checks out just fine. Roll as big a katamari as you can, right? The Prince is always scooping things up in the regular games, so have those give some currency, work in a leveling system to spend them on, and then leverage the non-gameplay elements of Katamari that make it so charming, like funny dialogue, a great soundtrack, a bizarre visual style, and a collection of interesting and weird objects to pick up. The shifts in scale as the katamari increases in size provide simple but effective rewards for progress, and collecting the junk to fill out a diary works as a mini-goal. People could enjoy the cleverly-written entries on each item, giving them something to do even if they only have a little time to check in on the game. This is just me scribbling on the napkin of my mind, but I think Tap My Katamari could have brought a lot of Katamari Damacy‘s strengths to the tapper genre. 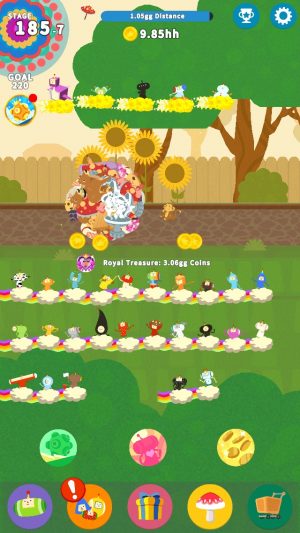 That’s not what happened, though. Some of that has come to pass, to be sure. You’re trying to roll up a big katamari, moving through progressively larger-scale sets. Every so often you’ll pick up an item and get some coins. The distance between items increases the longer you play, eventually stretching an unsatisfying span between those lovely plonk sound effects. You can use coins to level up the Prince, giving your taps more power, or to summon and strengthen his cousins, who grant various levels of support. You’ll eventually be able to unlock a few special moves that have cool-down timers, and you’ll get to a point soon enough where you’ll absolutely need those to progress. You see, after every ten objects you pick up, you’ll have to complete a timed challenge to move on to the next set of stages. If you fail, you can keep rolling around in the current area, grabbing objects and powering up, but you’ll want to move on sooner or later.

You can also receive candies, the game’s premium currency, as presents from the King Of All Cosmos Himself. He’ll swing in from time to time, repeating one of his clever lines from the original game, and tapping on him will either give you a few coins or candies, or prompt you to watch a video ad in exchange for a lot of candies or coins. Candies can be used to buy and level up special cousins, which gives you a permanent boost, or they can be spent on mushrooms, most of which offer temporary effects. Of course, if you want, you can buy those candies for real money. I think that would be silly, but it’s up to you. As for the presents, you get those by trading in stars, and you get stars by trading in your katamari, effectively starting over again. You can also use stars to level up any presents you’ve unlocked. Should you turn your katamari into a star and start again from the beginning, the only things you carry forward are these presents and the upgrades you’ve sunk into them. 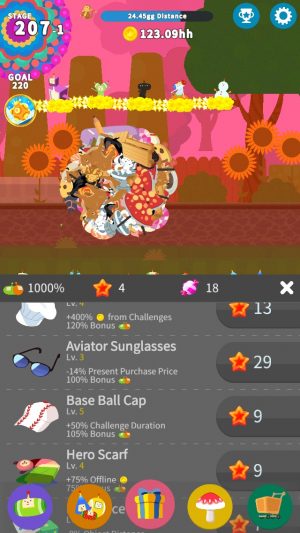 Lots to do, I suppose, but while it’s mindlessly enjoyable in the beginning when objects are getting scooped up quickly and the backgrounds are changing rapidly, it becomes a slog very early on. You’ll soon be stuck listening to the same few music tracks, picking up the same four or five item types, and only moving forward when the cooldown timers on your special moves have counted down. That is, of course, provided the game hasn’t arbitrarily decided that it thinks you’re cheating by moving your clock ahead or something, in which case it resets the timers on those moves to the maximum. It happened to me a couple of times, and I’m not sure the game understands that time actually does move forward in real life. Probably. I’m no physicist.

The music is great, but as I mentioned, but little of it is original and there isn’t nearly enough of it to go around. The game’s visuals are colorful but repetitive, and there’s really not much to the game itself at all. I mean, it’s a tapper, so there’s only so much there’s going to be in the best of cases, and Tap My Katamari is far from the best. If you’re just looking for something that plays Lonely Rolling Star while you hammer away at the screen, trying to reach increasingly distant basketballs and cows, you might be satisfied with this game for a few minutes here and there. I just can’t help but think this could have been far more interesting or fun than it is, even within the limits of the tapping genre as we know it.