Well, I can’t blame Kemco for trying. While the publisher has used IAP in its games for a few years now, even releasing free versions of some of them, it has largely stuck to what it’s become known for on mobile: traditional single-player JRPGs. The quality of the games varies according to which developer it sub-contracts out to, and those games are rarely ambitious in any meaningful way, but for hungry JRPG fans, they at least fill the belly. Given the way the App Store market has shifted, particularly in Japan, and the sheer number of releases Kemco has published, these games can’t be turning in particularly large numbers anymore. With social RPGs proving far more lucrative these days, it was only a matter of time before Kemco took a swing at something resembling one.

Enter Elio (Free), an ill-conceived attempt at getting some of that sweet social RPG cash. It’s developed by Hit-Point, once one of Kemco’s most frequent contributors. In the last year or so, it’s seen first-hand how much money a free-to-play hit can bring in. Cat collecting game Neko Atsume (Free) has been a serious success for the developer, so it’s no surprise Hit-Point has done far less contract work for Kemco since the game hit it big. No doubt Kemco is hoping to have a similar result with Elio. Unfortunately, there’s a basic truth at play with Kemco’s games business that is fairly evident at the best of times and glaringly obvious here. 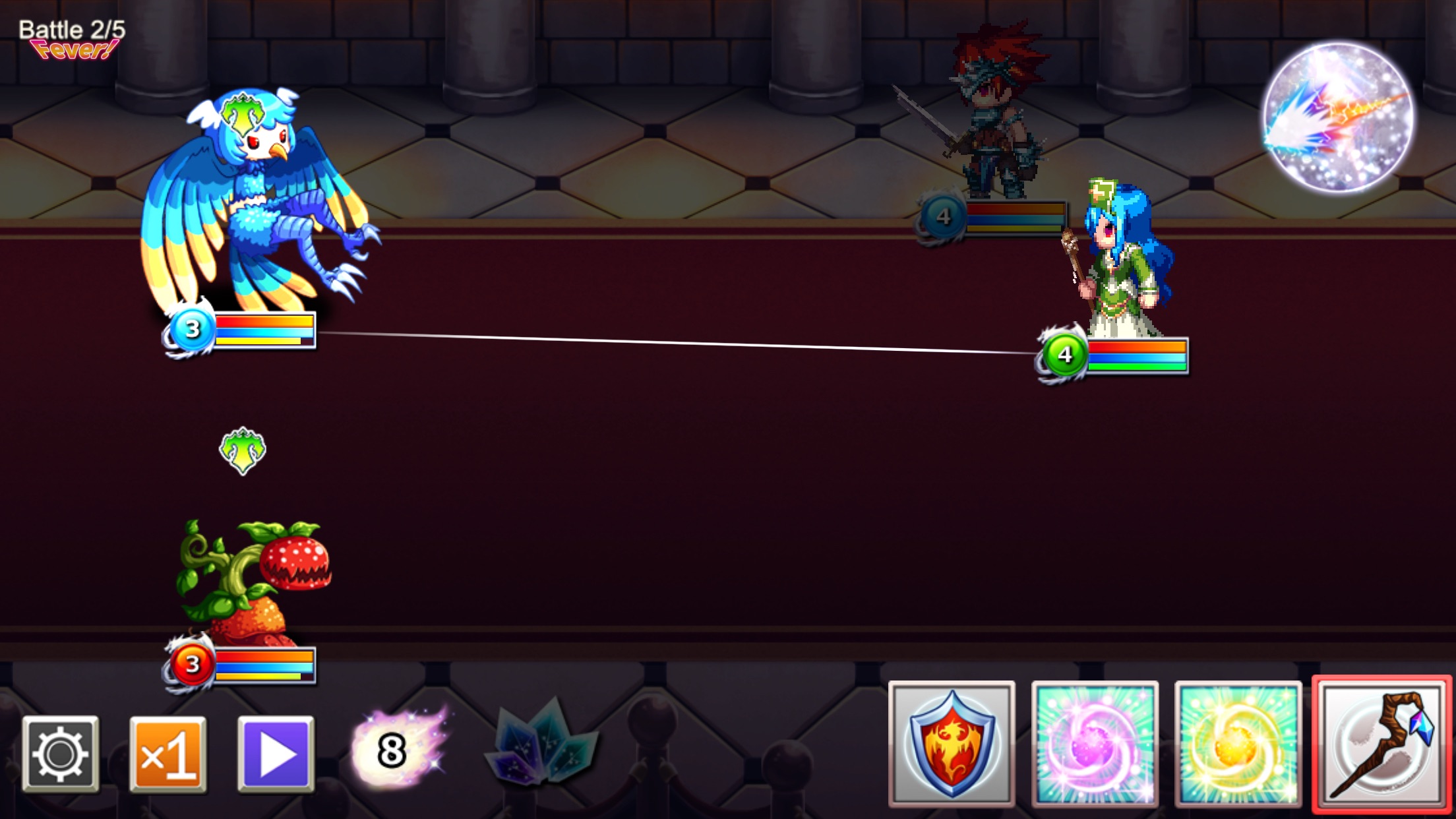 I say this with love, as I’m clearly as much of a fan of the publisher as any moderately sane individual can be. As a rule, Kemco does not publish very good games. It publishes adequate ones in spaces where no one better is satisfying the demand. The company has built its modern image by frequently churning out games that are priced low, budgeted even lower, and are, for lack of a more exciting adjective, okay in terms of quality. Very few other companies serve this particular niche on iOS, and almost none of them do so on a regular basis. It could be said, then, that Kemco’s greatest sales technique is a simple lack of competition. People overlook many of the flaws in the games it publishes because, really, what other original, traditional JRPG are you going to play on your iPhone this month?

To bring this back around to Elio, Kemco has stepped outside of that safety zone and jumped feet-first into a pool of sharks. Not the least of its problems is that everyone involved is out of their element here. Hit-Point has free-to-play success under its belt now, to be sure, but while I certainly enjoy Neko Atsume, it’s a far cry from a social RPG in terms of complexity. Hit-Point has more or less done the expected with Elio, grafting a simplified version of their usual JRPG battle system to popular social RPG mechanics like random gatcha character pulls, merging and evolving party members, and dungeons that consist entirely of a series of battles. Think Puzzle & Dragons (Free), but substitute the puzzle gameplay for a basic turn-based battle system. 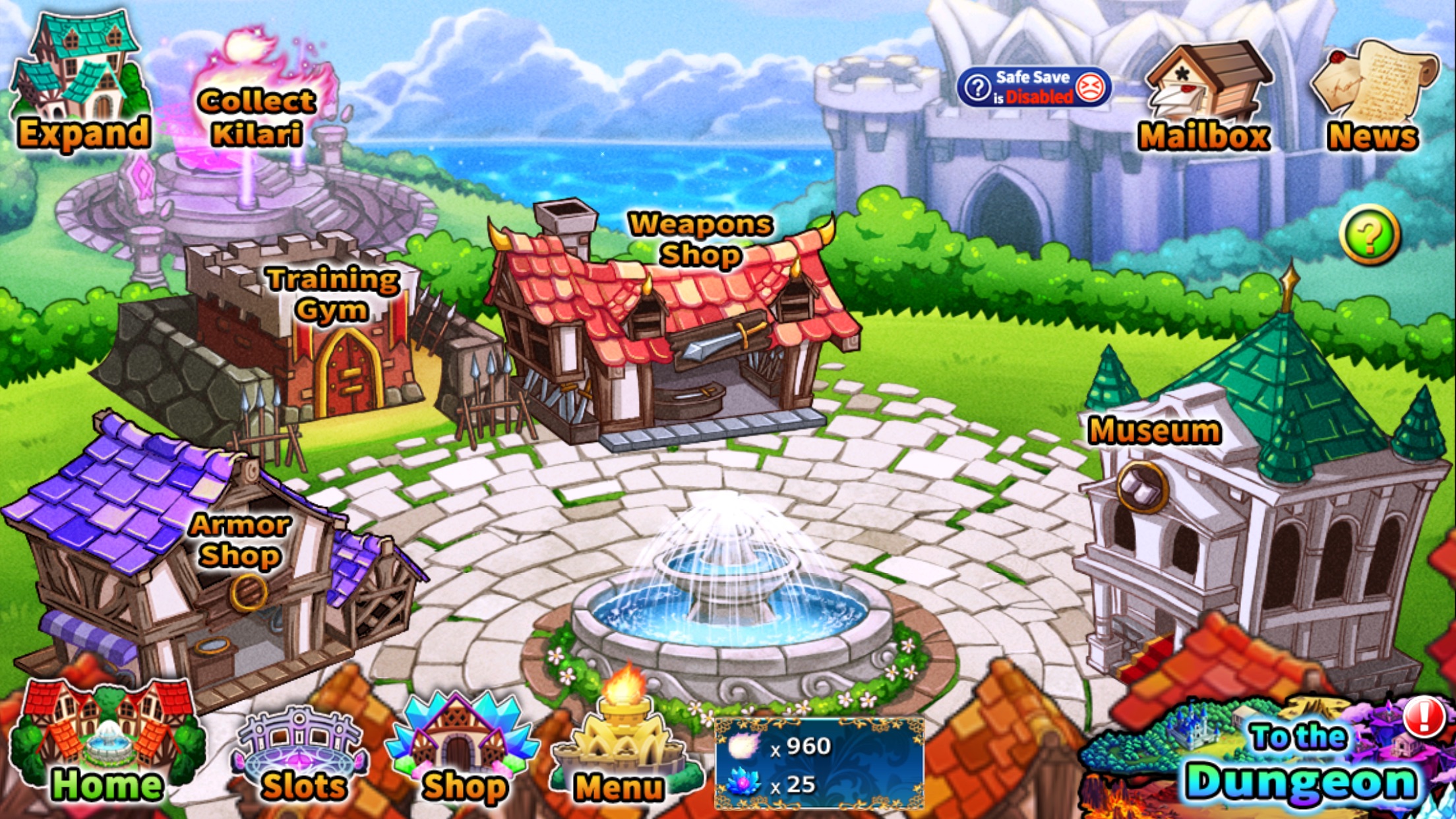 One interesting difference is that there is no stamina system in Elio, a choice I suspect has as much to do with the recycled engine not supporting that kind of system as any other reason. Oh, and calling this a social RPG is a bit of misnomer, even more than usual. While most games in this genre allow you to create a friend list and bring their characters into battle with you in some fashion, Elio is a completely solo experience. At least on the surface, it seems to check most of the important boxes, but Kemco and Hit-Point’s lack of experience in the genre shows itself very quickly. The difficulty balancing is completely out of whack, and the game gets extremely difficult almost as soon as it’s out of the tutorial. The collectible character classes have boring visual designs, with only minor changes between them.

Perhaps most critically, the battle system is as dull as dishwater. Characters have a couple of special moves they can use, plus a basic attack and guard. Those special moves consume MP, enough that you might get one or two uses out of a move before you’ve drained the meter. While you’ll eventually come across ways of restoring MP mid-battle, you’re probably going to spend most of your gameplay time hitting the fight command over and over again. While there are tons of job classes, apparently around 200, you don’t have a lot of room to play around with your party set-up. You’re going to need a physical damage dealer, a mage of the appropriate element, and a healer at all times, leaving you one slot to try something else. Realistically, you’re going to want another physical attacker or healer, because the enemies in this game aren’t big on mercy. 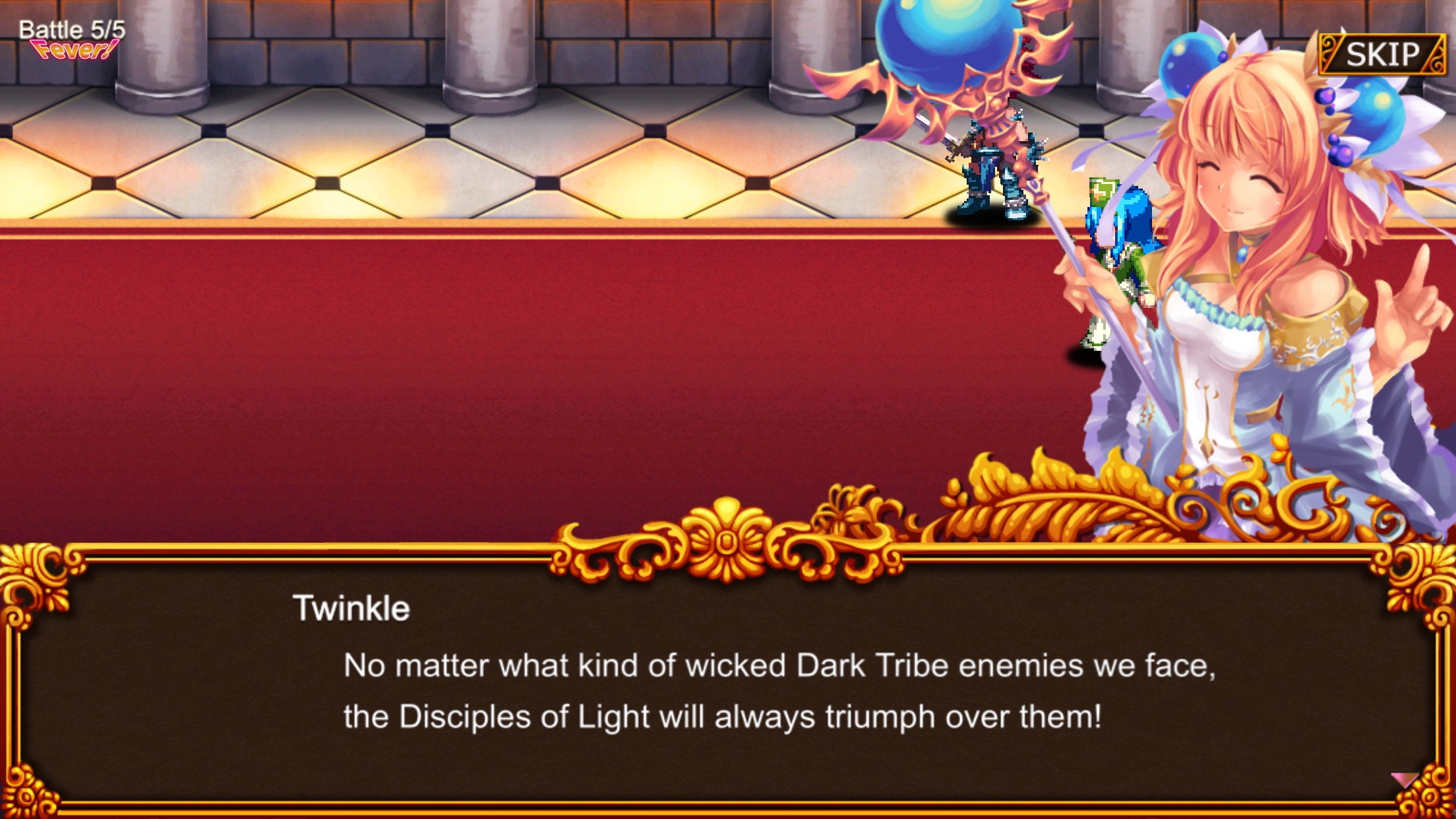 That job class number is padded out by evolutions. Each basic class can be evolved up through a series of more advanced classes should you level them up sufficiently and gather the appropriate materials, some of which are incredibly hard to come by. Materials are also used to build and upgrade buildings in your village, similar to how it works in Brave Frontier (Free). Keeping your village up to date is vital to your success, as it unlocks additional weapons and armor that you will absolutely need to win. Of course, you’ll have to be able to afford all of this, and that’s where the premium currency comes in, as usual. Kilari and crystals are the main currencies in the game, with crystals being the premium type that you can buy with real cash. In addition to buying items, you can use it to continue, expand the size of your item box, and all the other usual ways.

It’s not unusual for a social RPG to require a lot of grinding, but I’m not sure I’ve run into any before that demand it quite so early and often as Elio does. The lack of a stamina system means you can grind all day if you’re inclined to, but the gameplay is so painfully boring that even the mandatory battles can get tiresome, let alone repeating them for enough Kilari to get anything done. The lack of variety in the enemies and their behaviors is a problem all on its own, and running the same battles over and over again easily shatters any illusions you may have had about that. The best thing I can say about the gameplay is that there are buttons for auto-battling and cranking up the speed. You’ll want to use them both, as some bosses can take several minutes to chip down at normal speed. 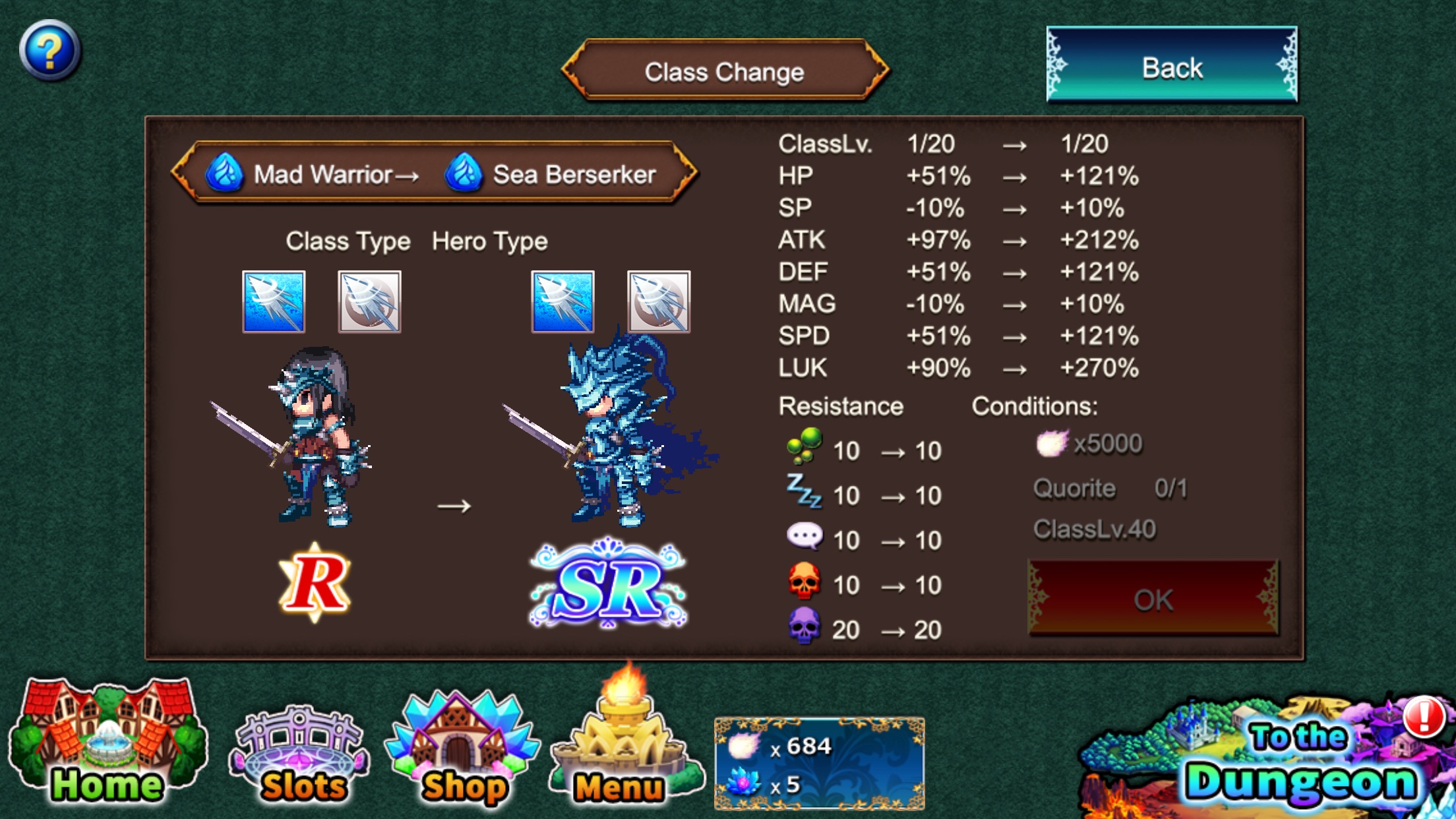 I suppose Elio isn’t outright terrible, but it is well below average. There are a lot of interesting pieces that fail to come together into something decent, and I can’t honestly say any part of it is particularly fun. That’s not good enough, particularly in a sub-genre with lots of strong competition that delivers new content on an on-going basis. I can’t imagine anyone giving up Puzzle & Dragons, Monster Strike (Free), or Brave Frontier for this game, nor do I see it appealing to fans of Kemco’s more traditional fare. Kemco’s C-grade efforts simply don’t cut it with this level of competition, I’m afraid. I’m not sure where that leaves Elio, but I know it’s not going to be on my device.