In a sea of ad-based gaming, currencies upon currencies, and premium purchases, it’s fun to find a game every so often that abandons that entirely. Sometimes, a game itself is a premium purchase, bestowing everything, from content to opportunities, with reckless abandon. It’s a model that isn’t exactly popular with each passing year, but one that still exists — and the developers of Rule with an Iron Fish ($3.99) have executed it wonderfully. 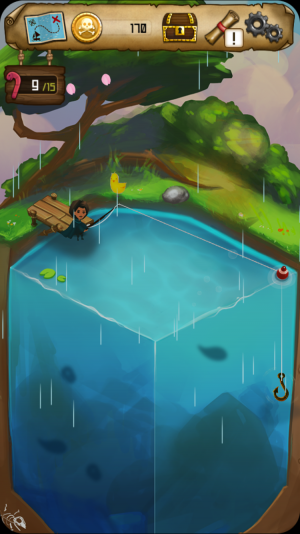 Let’s set the record straight — Rule with an Iron Fish isn’t going to set the world on fire anytime soon. It’s a fishing game, don’t get it twisted. A relaxing, idyllic fishing game, sure, but it doesn’t try to be much more than that. It’s a big “if," but if that’s what you’re looking for, you’ll find hours of entertainment, perfect for long binge sessions or short bus rides. Because where Rule with an Iron Fish really nails it is its delivery. Instead of just plopping players into a world and saying “go fish," there’s an elaborate setup involved that encourages people to keep on no matter what.

After choosing between a male or female hero, you’re shipwrecked on an island with a ragtag bunch of misfits, all with their own personalities and services. They’re actually fun to talk to and don’t feel merely like power-ups, or an excuse to sell you more things. While I wouldn’t go so far as to say that you’ll get attached or will remember every detail the next day after playing, they’re engrossing enough. Most of them will provide you with quests, which are basically akin to challenges in other mobile games (capture [x] amount of fish, and so on). But they’re done with just enough love where they don’t feel tedious. That, and the game actually rewards you with substantial upgrades, new areas in the hub zone, and more aesthetic gear choices for finishing them. It’s a perpetual cycle of positive reinforcement. 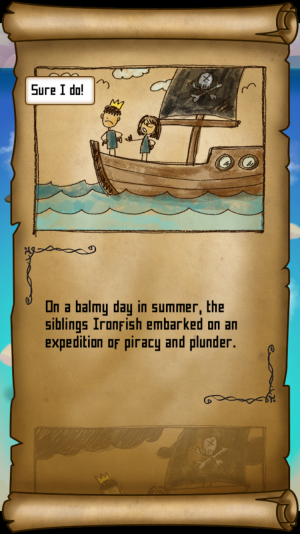 Sure it might feel repetitive to go to a new fishing hole every 30 minutes or so and work your way up to new equipment, but it’s consistently enjoyable. Plus, the control scheme is very responsive, and it’s easy enough to flick your rod into a specific area of the body of water to go for what you really want (which is especially useful for the flashing “rare" fish that pop up occasionally), or reconfigure your line to another zone with a few quick taps. That last bit is key, because I’ve played many fishing games that limit your movement. Since Rule with an Iron Fish isn’t the most technical out there it’s not even a requirement, and its inclusion is appreciated.

Things get a little more exciting once you start rescuing NPCs and bringing them back to the island with short combat sequences (in essence, fishing competitions where you sabotage a competitor’s line), which in turn reap even more benefits. The upgrade process is extremely linear, in that you’ll predictably earn a better fishing rod that can catch bigger fish, and so on, but again, the method in which all of this is distributed is easy going and well crafted. It’s especially enthralling to pick up pieces for a new ship bit by bit, or uncover a unique item in a latent treasure chest. 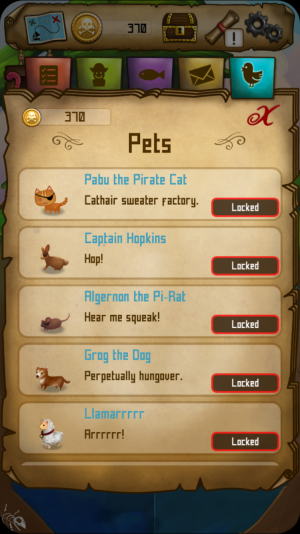 The writing has the tendency to be a bit on-the-nose and off-putting at times (there’s such a thing as too much wit), but given the sheer size of the cast it’s forgivable. Well, that, and the art style is adorable, complete with character models that actually stand out from one another and lush landscapes. The only real holdup is that despite the fact that there’s no IAP at all in the game (and thus, no power-ups to buy or currency that’s held back to invite players to spend money), it does get a tad grindy after the first few hours. Mid-game as it were can slow to a crawl, leaving players catching the same types of fish for too long, with sprinkles of progression.

Once I reached a goal and unlocked three more interesting quests though, and stood near my aquarium, admiring my catches, that feeling mostly faded away.  Yes, Rule with an Rule with an Iron Fish doesn’t do anything wholly new in the fishing space, but it does just about everything right. Even after finishing my first quest I decided to make a new character and slowly go at it again. For a game that costs a few bucks and can be played anywhere, that’s a pretty good barometer of success.