iDreams’ Sky Force Reloaded (Free) is a great example of how to make a fun shoot ’em up that is traditional yet fresh. The situation isn’t really surprising: you fly upward through levels, shooting both moving enemy formations and ground-based enemies, while trying to rescue humans that are on the ground. Those humans are a bit disappointed if you don’t pick them up, but hey – sometimes dodging the plethora of enemy bullets is more important. It’s not exactly a ground-breaking shmup, but it wins some points for variety. Levels occasionally throw some bullet-hell-esque hazards, and vary how the boss fights work. One level even takes your weapons away and forces you to dodge hazards and collect stars, the game’s currency. There’s a long-term progress objective here: you can upgrade your ship’s health, weapons, and powerups. You can collect ship parts for new ships with different stats, with one ship unlockable if you played Sky Force 2014 (Free). 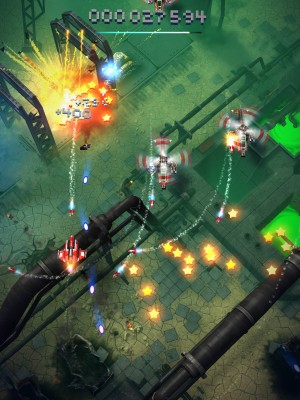 Sky Force Reloaded just winds up being very playable and good at what it’s trying to do without reinventing the wheel. The game is challenging without being excessively so. The enemies are varied, and paced well throughout the levels to give you moments to breathe. The game has great visuals, but doesn’t make it too difficult to tell enemies and the environment apart. The game controls perfectly as a one-handed operation, with the action slowing down when you lift your finger; this also lets you use your weapons and special powerups without requiring any crazy multi-taps or icons to use. There’s both offset touch controls and a direct “ship moves where your finger is" control system.
Considering that iDreams made the first Sky Force back in 2004 for featurephones, it just goes to show that they know what they’re doing, and they don’t want to muck with what works too much.

Sky Force Reloaded‘s whole free-to-play situation is really odd. I say odd because it’s a game that has some aspects where it could clearly tighten the screws a bit further than it does, and it has elements that other more shameless games use, but it eschews really trying to hose the player over in the name of making money.

How can you spend money? Well, the smart money is in buying the $1.99 stars doubler, which doubles all the currency you get. Next up is the $1.99 ship regenerator. Now, this is where the weirdness comes into play. See, you have a lives system, with your ships taking time to regenerate. Early on, this isn’t a problem, necessarily. But the game doesn’t show all its monetization cards right away, with ships taking increasing amounts of time to regenerate. This IAP should have just been unlimited lives, as even as I got into the later parts of the game, I rarely fell below the new max of 20 ships, with them regenerating quickly enough that playing a level would restore them. It also would be less confusing, for sure. You can also pay $1.99 to disable ads, which aren’t really that annoying, though if I see those Game of War (Free) or Mobile Strike (Free) minigame ads again, with the way that they trick you into clicking on them after you get far enough in their minigames, I might just drop that $1.99. You can also pay $0.99 for 5000 coins, and watch video ads for various rewards. 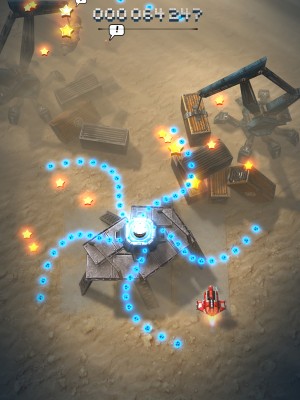 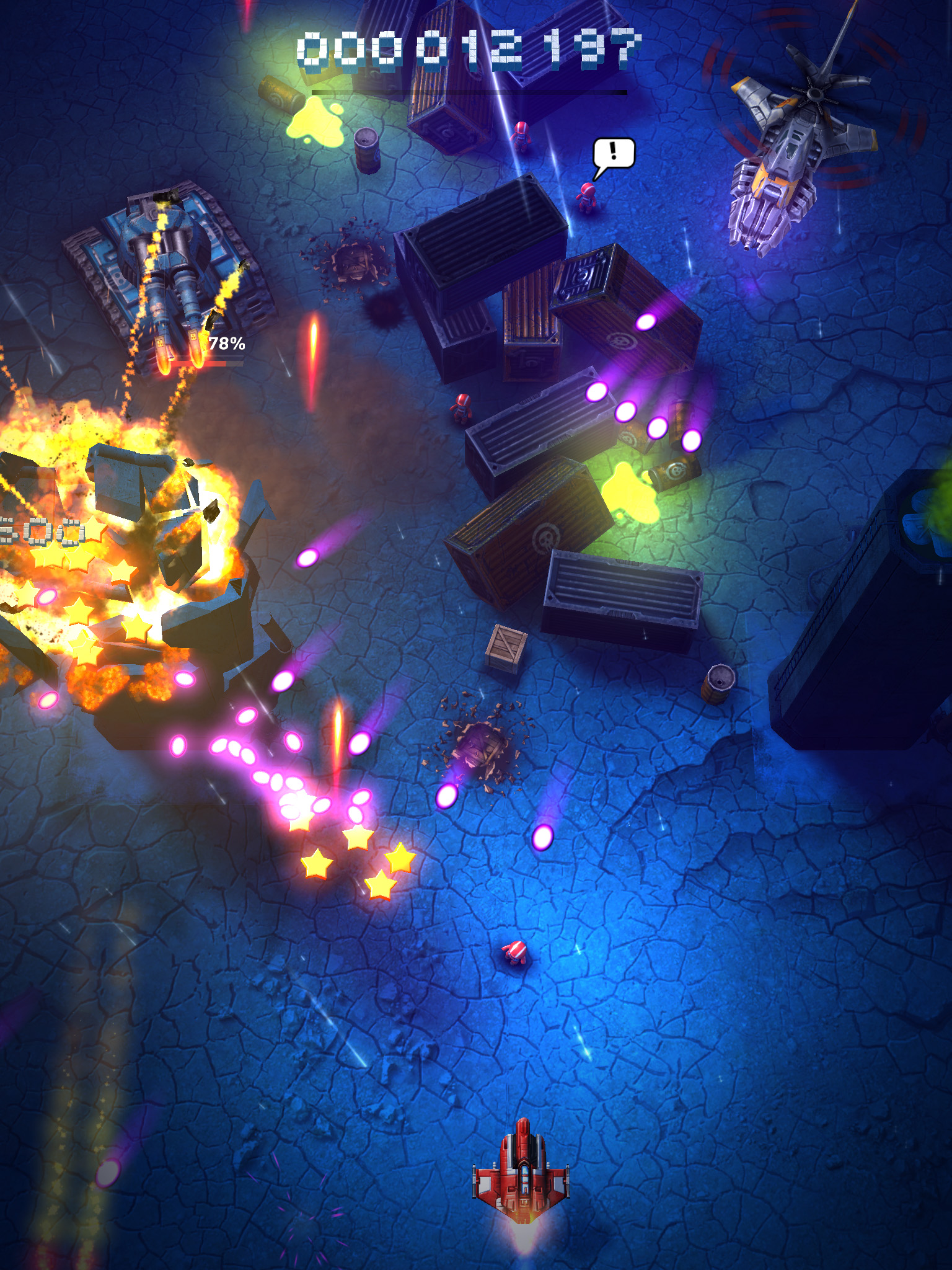 But what’s crazy is that the game has kind of a convoluted monetization, with currency to get and wait timers and lives, but it could have been so much worse. It could not drop bonus powerups in the levels, or give you checkpoints you could pay for. There could be a hard currency. The game could make it a lot harder to unlock the various ships by having you buy boxes for the ship parts, or just letting you buy the ships outright. The card system, which includes cards with short-term bonus effects, can’t be bought, and are rarely collected in the game itself. This game is so weird with its free-to-play aspects because its clearly trying to balance out aspects like gacha systems and social features with trying not to make players feel like they have to pay to win at this game. I feel like the game could offer up more things to spend the stars on, or even offering things like having the temporal cards be permanent upgrades you can acquire. I’d love to get rid of upgrade installation permanently, for example. But at least this is a game where you can spend $6 and eliminate most of the free-to-play of this game. 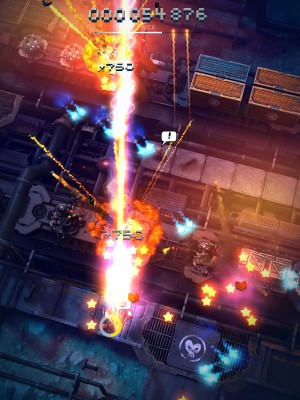 You have to enjoy repetition to a certain degree to enjoy Sky Force Reloaded. The game makes progression barriers to later levels be very high, with the need to get many trophies on earlier levels to advance to later levels. Once you get all 4 of the trophies on an earlier level, then that unlocks a harder difficulty, with 4 more trophies, and then a hardest difficulty beyond that. I should dislike this system, but yet, I actually kind of enjoy it. I’m not completely sure why, myself – the levels are all fixed sequences. But perhaps it’s that each objective actually teaches you how to play the game better. Rescuing the humans and trying to not take any damage teaches you to watch enemy bullet patterns and to learn how to dodge them. The enemy kill percentage trophies force you to learn how to effectively take down enemy formations, and how to watch for where some of the less-prominent enemies and destructible objects might be. This is useful, but with the drawback that it winds up making the easy difficulties of later levels easy, because you’re picking up the skills to beat them well before you unlock them.

You will be replaying levels a bunch, but it helps that the game avoids a lot of frustration. The levels aren’t that long, and often times you have recourse to avoid what thwarted you, whether that be a new upgrade or an additional powerup. Plus, the game is just so gorgeous and plays so well that it’s something I want to play again and again. And I have done just that. Not to mention, some of the social features, like being able to fly past player beacons in-game and trigger star rewards for beating them is fun. Like the rest of the game, I don’t fully understand how it works, like it if triggers a notification, or if it gives people a gift like I get from others occasionally, but its still a cool feature. The game has iCloud support, but sadly the Apple TV version has yet to hit. It might be a separate release – Sky Force Anniversary is a TV version of Sky Force 2014, and it uses a simpler pay-once model.

I highly recommend giving Sky Force Reloaded a shot. It’s a fun, well-made shoot ’em up with some unique quirks to it. In fact, I’d go so far to say that it’s my favorite shoot ’em up in recent memory, probably going back to .Decluster Zero ($4.99) at least. Whatever shortcomings its unique aspects offer, it just winds up being, but I’ve found myself losing a lot of time to this one, with its challenges being rewarding to conquer. Prepare to have a lot of fun with this game.