Chances are good that if you know any Japanese RPGs at all, you know Final Fantasy ($7.99). It’s also quite likely you’ve at least heard of Dragon Quest ($2.99), even if you haven’t played it. Chrono Trigger ($9.99) and Secret Of Mana ($7.99) are both quite well-known worldwide, as well. It’s not surprising, then, that Square Enix has diligently ported almost every one of those games to mobile over the last several years. With only a few holes remaining among their world-famous titles, however, Square Enix is probably going to have to dig a little deeper in their back catalogue if they want to find new candidates to port. This year we’ve already seen a lovely remake of Final Fantasy Adventure in the form of Adventures Of Mana ($13.99). Perhaps it’s fitting, then, that the next unexpected selection comes from the other series that started on Nintendo’s Game Boy.

In contrast to Mana’s case, though, there’s very little chance you’ve already played Romancing SaGa 2 ($17.99). The first three SaGa games, all on Game Boy, were released internationally under the name Final Fantasy Legend, but from there, the series moved to the Super NES console with three interesting titles that sadly remained exclusive to Japan. Square began localizing the series again with its first PlayStation installment, SaGa Frontier, and from then on, nearly every SaGa game got an English release until the disastrous PlayStation 2 duo of Unlimited SaGa and the remake of the original Romancing SaGa caused Square Enix to rethink its future. Unfortunately, that means English gamers missed out on the DS remakes of Final Fantasy Legend 2 and Final Fantasy Legend 3. SaGa‘s been locked in Japan for more than 10 years now, but it’s finally getting another shot in the West with this excellent remake of Romancing SaGa 2, the second in the trio of Super NES games. 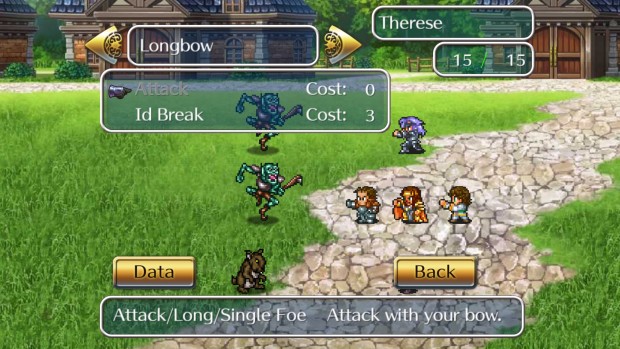 This represents a rare case as far as Square Enix’s relationship with mobile goes. The App Store has seen some exclusive remakes of games previously released on other platforms in English, but this is the first time Square Enix is debuting an English version of one of their classics on iOS. Opinions on the SaGa series vary wildly, but Romancing SaGa 2 has always been one of the better-regarded installments, so seeing it release outside of Japan on mobile platforms before anywhere else speaks to Square Enix’s confidence in the platform, as well as their faith in relatively expensive, IAP-free, paid games. There’s a Vita version of the game in Japan, and apparently Square Enix is giving heavy consideration to releasing it in the rest of the world, but for now, Romancing SaGa 2 is all ours, friends.

Well, wait, do we even want it? Yes, we do. There’s no question that, like other games in the series, Romancing SaGa 2 has some eccentricities to it, and that’s even setting aside the fact that it’s a 23 year-old game to start with. At the same time, it’s such a quirky game that I doubt even many veteran JRPG fans have played anything quite like it, which helps it feel fresh in the here and now. If you’ll pardon the use of a tired cliche, it’s not for everyone, and even those who like it are probably going to hate it at times, but overall, it’s an excellent game that feels almost completely different from anything else Square Enix has released on the App Store. 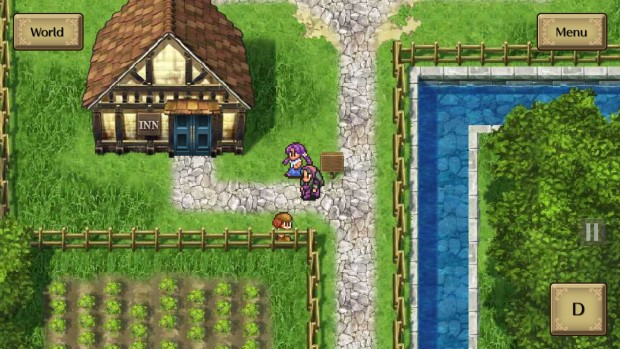 In Romancing SaGa 2, you play as a line of emperors and empresses overseeing the empire of Varennes. Every player starts off by following the brief story of Leon and his sons, Victor and Gerard. Although Victor is first in line to follow his father, Leon wishes to train Gerard in the ways of combat. While they’re out taking care of some trouble one day, Avalon, the seat of the empire, is attacked by one of the Seven Heroes, sending Leon on a quest for revenge. In spite of the name, the Seven Heroes are your main antagonists in this game. They were once great heroes who saved the world and disappeared, but they’ve returned as powerful monsters. You’ll have to battle them all over the course of the game, but you won’t be doing in a short amount of time.

Once you’ve wrapped up the prologue chapters, you’ll have to start taking care of your empire in various ways. You can use your funds to start public works projects, invest in research for new weapons and armor, and increase the size of your empire by battling through set scenarios. As you complete scenarios, you will occasionally move ahead a generation and have to select a successor. This eventually culminates in an epic final battle between your ultimate emperor or empress and the Seven Heroes, but until that point, things proceed in a relatively non-linear fashion. You can tackle scenarios more or less in whatever order you like, upgrade Avalon as you see fit, and so on. Don’t worry about starting new with each generation, either. Through the use of a special magic spell, each generation passes their accumulated abilities down the next. By the end of the game, your main character will likely be like a tiny god. 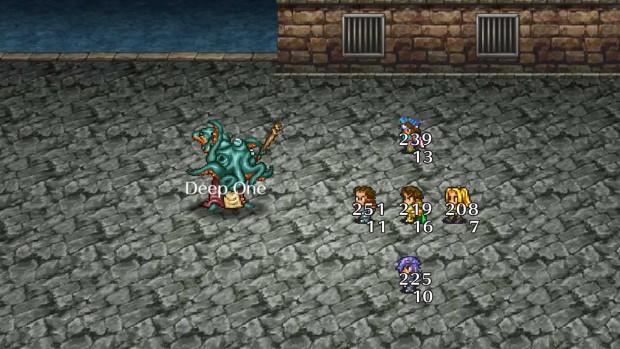 Although you’re a very hands-on ruler, you won’t be battling on your own. Each generation, you can select party members from among the various lands under your rule. Like the main character, they all get a little stronger as you go along. Each character type has their strengths and weaknesses, along with their own weapons and special abilities, but you can customize them to an extent by changing their gear and teaching them new abilities. You’ll learn abilities in battle seemingly randomly, but once any character has memorized an ability, it can be freely taught to all subsequent generations. The faces and names will change, but you are still developing your characters over time.

That said, there are other ways characters can exit aside from the time skips. Every character, including your main, has both hit points and life points. Hit points work as usual, but if a character is knocked out, one point will be permanently deducted from their life points. When those points hit zero, that character is dead, no coming back. If that character is your main, you’ll trigger the next generation change. If said main character is the final emperor or empress meant for the endgame, well, that’s a game over. You can play fairly carelessly until you reach the last generation, however, so don’t stress out about it too much. There are plenty of replacement party members in the world. 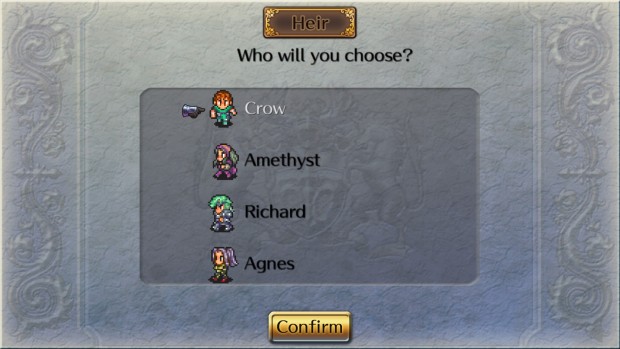 The more important thing to pay attention to is how many battles you fight. Win or lose, each battle you participate in makes the game a little harder. The monsters will get stronger, and perhaps more critically, the Seven Heroes will become harder to defeat. This is not a game where grinding is a good option, in other words. At the same time, the random nature of skill acquisition and the way enemies respawn when you re-enter areas seem to be at odds with this. Keep in mind that you’ve got a lot of time to learn skills throughout the course of the game, and that the difficulty takes into account that you’re essentially required to fight a certain number of battles in any case. Just don’t run around in circles fighting enemies needlessly and you should be okay.

The battles themselves are fairly standard turn-based affairs. The math behind everything is fairly complicated, as weapons deal different types of damage that react differently to the various enemy types, but all you need to do is choose a command and go. One of the more important bits is your party’s formation. You can group your characters in different patterns that convey certain advantages and disadvantages. Initially, you only have a couple to choose from, but you’ll learn more with each generation that passes. Using formations wisely is very important for success. Those formations will only work for you if you manage to keep them, though. If an enemy attacks you from the back or you run into them at full speed, your formation will break, potentially leaving you in a jam. Use your walk button judiciously, or turn off the auto-run option. 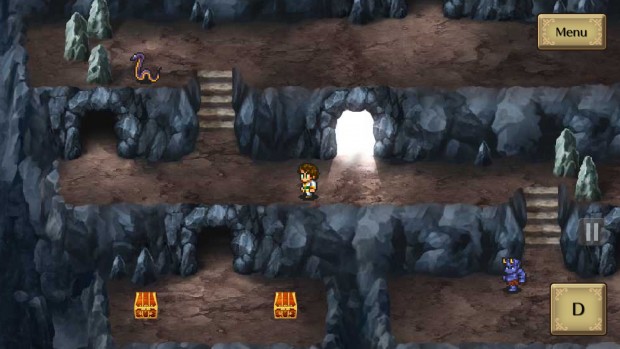 Leveling up works a little differently from other RPGs, though if you’ve played any other SaGa games, it won’t seem terribly unfamiliar. Instead of discrete levels, you’ll gain stat and weapon upgrades individually after fights. Instead of experience points, you earn skill points, which are pooled and used to determine when a weapon level-up occurs. I think, anyway. One of the problems with Romancing SaGa 2 is that it does a lot of things differently from most other RPGs and does absolutely nothing to explain them. It’s not too hard to hash things out, but there are parts of the game that will likely be a mystery to you from start to finish. Particularly in the beginning, the game feels a bit overwhelming. If you can push through the early confusion, you’ll likely get the swing of most of it.

This is a solid remake that enhances the game’s presentation without compromising its original appeal. I find myself wishing Square Enix had taken similar care with the Super NES Final Fantasy ports, to be honest. Backgrounds are colorful and sharp, while the characters maintain their pixely appearances from the original version, albeit ever so slightly enhanced. No blurry filters, no weird tiling, and a generally cohesive visual style mean Square’s 2016 roll keeps on rolling. Unfortunately, there’s no support for MFi controllers, and I found the directional movement to be a little fiddly at times. That’s an issue when you’re trying to dodge the visible and typically aggressive enemies in the dungeons. I also want to call out the localization, because it’s unusually bad for a modern Square Enix production. There are lots of spelling and grammar mistakes, and dialogue is often stilted and awkward in the same way dialogue in many Super NES RPGs were. That’s one point of authenticity I could have done without. 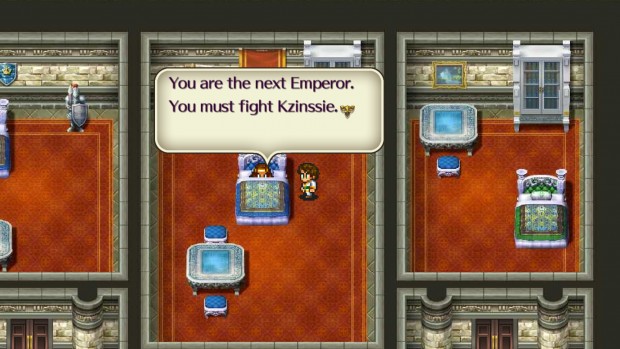 Although the game’s difficulty balancing is atrocious, the gameplay systems are poorly-explained, and dungeons are full of that old Akitoshi Kawazu staple of monster closets, I found myself enjoying Romancing SaGa 2 a little more than I usually do with SaGa games. It could be that I’m more open-minded in my old age, but I’m willing to forgive some rough edges if the ideas are fresh enough. It takes a little time to figure out Romancing SaGa 2, to be sure, but that’s as much because it does things differently as it is due to poor documentation. Once you’ve adjusted, it’s kind of surprising how compelling the game is. Popping in to finish off a scenario or two is so easy that if I didn’t know better, I’d think the game was designed for mobile play to begin with.

As long as you’re willing to put up with a few flaws that come about in virtually equal measures from its innovative design and 23-year-old age, Romancing SaGa 2 is a fantastic addition to your mobile RPG collection. It’s a particularly good choice if you happen to be weary of the typical JRPG template, because it really does follow its own path, for good or ill. It’s a little on the pricey side, as all of Square Enix’s games are, but you get a densely-packed, high-quality, 40 hours of joy for your money with no IAP shenanigans to worry about. Those who like strong story elements or rich characters in their RPGs might want to give the game a pass, though, because it’s not particularly good at either of those things, and the weak translation hurts what little is here. Otherwise, Romancing SaGa 2 is a fun, off-beat, challenging addition to Square Enix’s mobile line-up, one well-worth tackling.