Virtually every Japanese strategy RPG can be said to be inspired by Nintendo’s Fire Emblem in some way or another. While strategy RPGs followed their own path in the West, they did so mostly on computer formats that either weren’t available in Japan or were very niche. When Fire Emblem‘s developer Intelligent Systems got the idea to add some Dragon Quest-style elements to their Famicom Wars turn-based strategy formula, they ended up creating a sort of Dragon Quest of their own. Not nearly as popular, mind you, but certainly as influential for its sub-genre. Without Fire Emblem, games like Final Fantasy Tactics, Disgaea, and Shining Force likely wouldn’t have existed, nor would the numerous strategy RPGs that they themselves spawned. That said, while a debt is clearly owed, the genre has widened and evolved considerably over the years, to the point that many strategy RPG games bear little resemblance to Fire Emblem.

But as is the case with pretty well everything, some examples hew closer than others to the source. At least mechanically, Phantom Of The Kill (Free) makes little effort to hide the source of its inspiration. Battles have you sending out your squad of up to six units on a battlefield made up of square spaces. Certain parts of the terrain will affect your accuracy, defense, or other stats, and characters who sit in adjacent spaces will give their squadmates various bonuses depending on how close of friends they are. Engaging an enemy unit in battle cuts away to a detailed, animated, ground-level view of the attack. It even uses the exact same weapon triangle as Fire Emblem, where characters using axes beat characters using lances who beat characters using swords. That’s not to say Phantom Of The Kill doesn’t distinguish itself, however. Since this is a free-to-play game, it fuses a lot of social RPG elements into its otherwise familiar formula, creating something altogether different from the usual Fire Emblem experience. 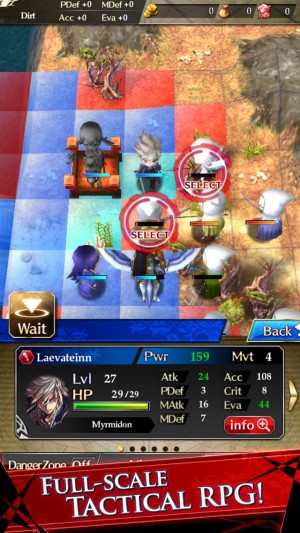 Then there’s the story. Well, it’s a story, alright. I get the feeling the localization team did their best here, but it’s hard to make much of utter nonsense. At least it all looks good, with nicely-drawn characters and a really slick animated opening supervised by Mamoru Oshii of Ghost In The Shell fame. The gist of it is that there’s been a kind of apocalypse that, of course, destroyed Tokyo. Humans are now an endangered species, and demons roam freely. The last hope of the human race is a special type of warrior known as Kill Princes and Kill Princesses. They’re humans who have been infused with beast blood to make them more powerful, but the process makes them incredibly unstable. The only way to counteract that is through a special material called Killium and… you know what? Never mind. Just make your squad, tap the next mission, and enjoy. Trying to make sense of the story is only going to end in fire.

Outside of battle, things work more or less like any other social RPG. Adding friends allows you to take their main character into battle with you, and if anyone chooses your character, you’ll earn some mana points. Mana points can be used to draw gear or new units from a low-tier portal, but most of what you’ll get from there will be of little use except as fusion fodder. The really good draws come from the portals that require Lazuli, the premium currency. Lazuli can be earned in various ways for free, and is used for drawing new units, increasing your inventory size, and all the other usual ways. Getting free Lazuli through completing missions gets more difficult as you go, so you’ll probably be left to rely on login bonuses and so on if you don’t want to pay. As usual for a social RPG, however, you really only need a few good units to build a pretty solid party. If all else fails, you can buy Lazuli from the in-game shop in various denominations for somewhat stiff prices.

In addition to organizing the members of your party, you’ll also want to outfit them with gear. Both gear and the units themselves can be fused. Fusing units will strengthen the base unit, while fusing gear will produce a new piece of gear entirely. You can also evolve units if you have the right materials. And of course, this being a mobile social RPG, more than half of the available units are cute girls in various states of undress, many of whom don’t look big enough to even lift the weapons they’re using. Suffice it to say, if you’ve got any issues with that kind of aesthetic, you’ll probably want to avoid Phantom Of The Kill. Personally, I get a kind of bizarre kick out of a demon-slaying schoolgirl named Mjolnir who swings a hammer bigger than she is, but your mileage certainly may vary. All of the units are represented in battles by super-deformed 3D models, and outside of battles with 2D portraits of more typical proportions. 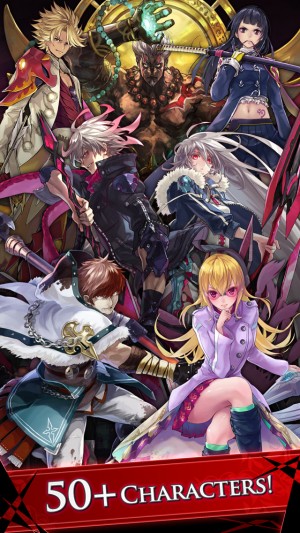 So far, there are four different modes you can play. The main mode has you going through a series of battles interspersed with the aforementioned nonsense story. Each battle has a few extra goals to achieve, with various rewards given for accomplishing them. As long as one character survives through to the end of the battle, you’ll be able to move forward. Like most social RPGs, the game starts off fairly easy, but the difficulty curve ramps up pretty sharply after the first twenty or so missions. You’ll be leveling up your characters and your main rank all the while, and with level-ups topping off your stamina meter, you probably won’t even notice it at first. It’s there, of course, and each point on the meter takes five minutes to restore, with missions requiring anywhere from a few points to twenty or more. The maps start off quite small, but they soon grow to about the side of a mid-tier Fire Emblem map, which is plenty of room to wiggle around in.

There’s also the obligatory event quests, time-limited events where you can earn resources needed for fusion, evolution, and so on. You can also pick up some special gear in this mode if you’re lucky. You’ll unlock the game’s third mode if you draw or evolve any of the game’s five-star rarity characters. In this mode, you’ll play through character-specific stories, each with their own special missions. The gameplay in these two modes is more or less identical to that of the main story mode, with you fielding your team against an assortment of enemies in turn-based battles that take place on a grid.

The final mode, the Colosseum, shakes things up a little bit. Here, you field your team against another player’s team in a series of duels. Whoever racks up the most wins out of five rounds takes home the victory. This mode uses its own special stamina points, and it’s a good source of experience points, among other rewards. It’s the mode to play if you don’t have a lot of time, as the whole thing wraps up in a matter of a minute or so. The missions in the other modes last anywhere from a couple of minutes all the way up to 15 or 20 minutes, depending on the complexity of the map and the number of enemies. 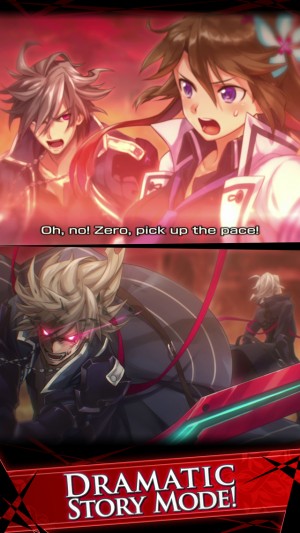 While I find Phantom Of The Kill to be quite fun, it suffers from a lot of the usual social RPG problems. The loading times are frequent and relatively lengthy, the difficulty curve gets steeper and nastier the more you play, and it eventually reaches a point where it feels like you’re running a treadmill to earn, by chance, one of the fifty pieces you need to get your next significant upgrade. I appreciate the game’s attempt at a story, but an attempt is about all it is. The animations in the battle scenes are a little stilted, and it looks particularly awkward whenever someone falls down.

The game features extensive Japanese voice acting, but an awful lot of the characters have extremely irritating lines that they’ll energetically repeat quite often. I suspect the voices, along with the animated cut-scenes, are responsible for the large file size of this app. It’s one of those games that wants to download a bunch of extra data the first time you fire it up, too, so be ready. The computer AI isn’t very bright, either. It will forgo an obvious kill to go after a completely healthy archer, for example. It’s pretty easy to cow it around, and the developer has obviously compensated for that by giving enemies higher stats rather than better intelligence.

The unfortunate fallout of that weak AI is that after a while, Phantom Of The Kill starts to feel a bit rote. You’re either strong enough to beat the enemies, or you’re not. If you’re not, you need to grind or get a lucky draw. You don’t need to use any tactics more advanced than dropping your strongest unit within the range of the enemies and watching them come running. For quick sessions here and there, that’s fine enough, I suppose. But it means that neither the story nor the gameplay are strong enough to elevate the game beyond the status of an average social RPG with excellent production values. Genre fans will likely get a kick out of it initially, but I have to believe that only the hardest of the hardcore will stick around once the grind sets in.