Goo Saga ($1.99) is a fun platformer for those who would be intrigued by a bit of physics fluidity in their games. It’s perhaps a bit loose-playing, but fun. You control a sentient ball of goo that has to find the scientist that created them, and you do so by using your gooey abilities to their full potential. You can jump and slam on enemies to defeat them. As well, you can inflate and deflate, with inflation giving you a more solid body and faster speed, at the expense of some control. Additionally, you can deflate, which is slower, but allows you to squeeze through tight corners. Platforming and enemy-bopping is a huge part of the experience, but boss fights and vehicle-based levels will throw the occasional wrench in the proceedings. 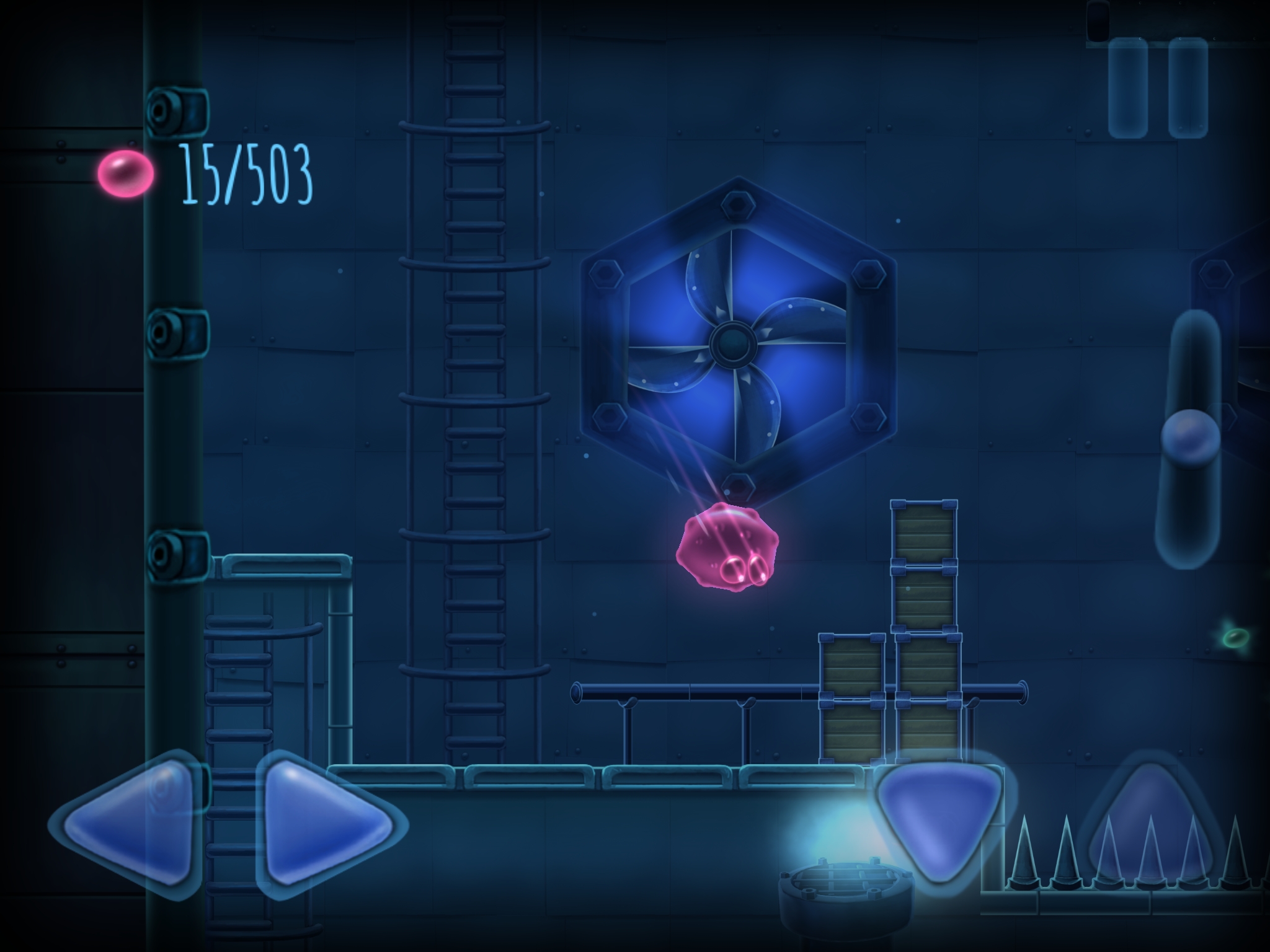 The goo by its nature is a bit difficult to control because it has physical properties to it, and you can change how inflated it is, so this makes defeating enemies a bit trickier than in other games. So, there are situations where there’s only a slight difference between when you hit an enemy and you take damage from just touching their head. I suppose it makes more sense than most platformers, because at least the downward velocity should be able to hurt more? I suppose? At least the physics help you out too – if you only partially land on a platform, you can often propel yourself upward by moving in that direction or by jumping. The game’s gooey physics are give and take.

The production values on Goo Saga are fantastic. The gooey protagonist is fluid and feels alive. The animations are great for all the creatures in the game, and the detail to the characters and backgrounds is fantastically-done. The game uses specific color hues to present a consistent environment, but it doesn’t make it drab at all. There’s still color, such as the different shades that the gooey hero takes on. This is a gorgeous game to behold. The music and sound fits the game well, such as with faster music tracks for the time trial mode. 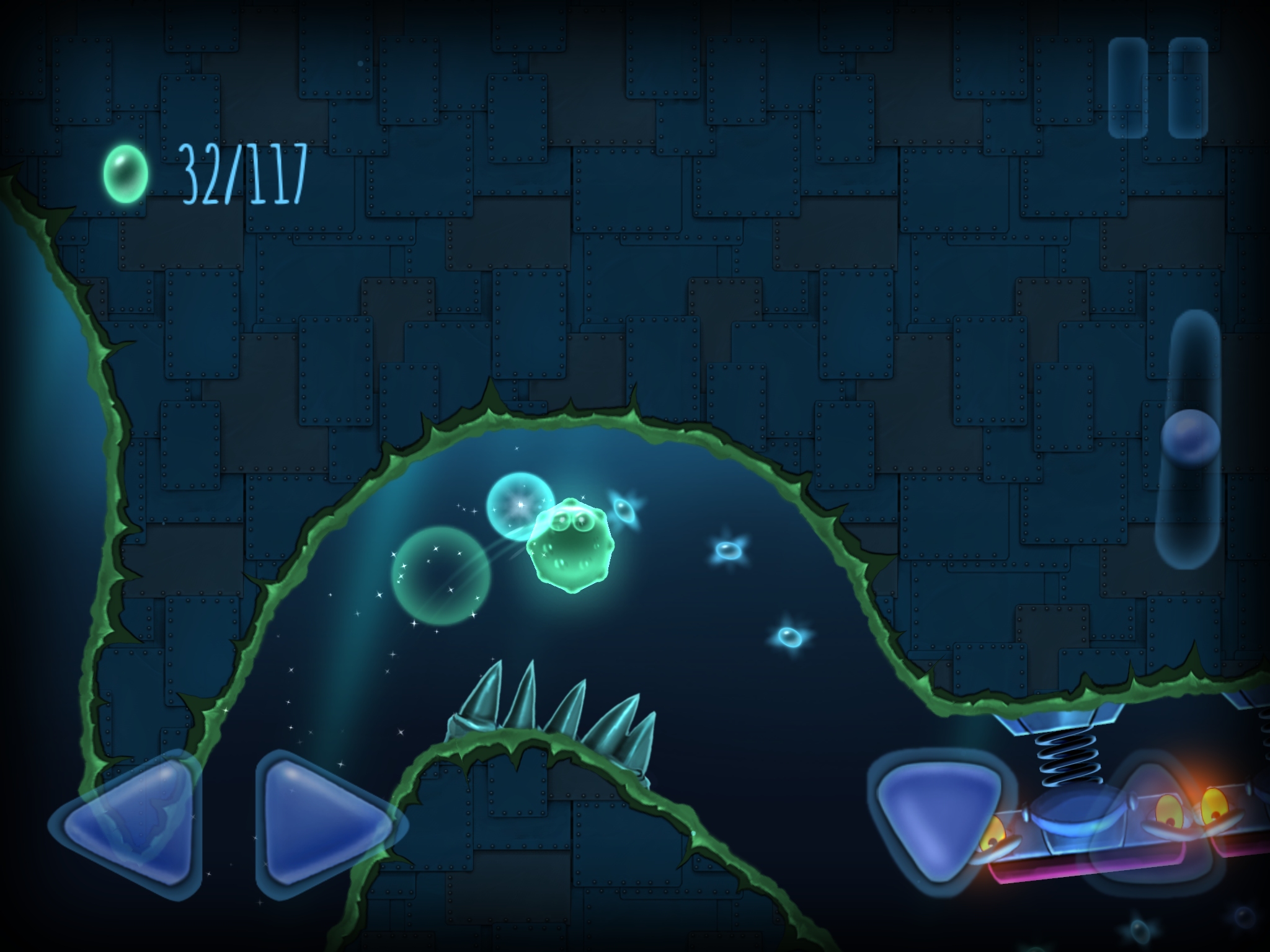 Goo Saga‘s upgrade system has an important and defining role in the game. The levels are perhaps beatable without any upgrades, but you can increase facets of your jumping, speed, and gem collection by using and unlocking upgrades. You spend crystals on upgrades, and can recycle the crystals. Because the levels have 3 different modes, you can build the loadout how you choose. For the first time through a level, I prefer to max out gem efficiency from enemies, magnetism, and my jumping stats: this way I can get all the gems necessary to unlock the next mode with greater ease. For the survival mode, I max out my health and starting hearts so that I have some wiggle room without the checkpoints. I keep some health for the time trial mode, but also put points in my speed stats for obvious reasons.

The advantage to the upgrade system is that it’s versatile for how you want to play. The downside is that it affects your progression, because it can compel you to keep playing through levels to get the upgrade crystal. There’s also no way to earn multiple objectives at once. I feel that if, say, I collect enough gems in a level and complete it without dying, that should count for both the gem and survival modes. And if I complete the survival goal and in the time trial time, I should get credit for both. I suppose there’s a helpful focus in having to only deal with one objective at a time, but it also kind of feels like it’s an obstruction to progress. 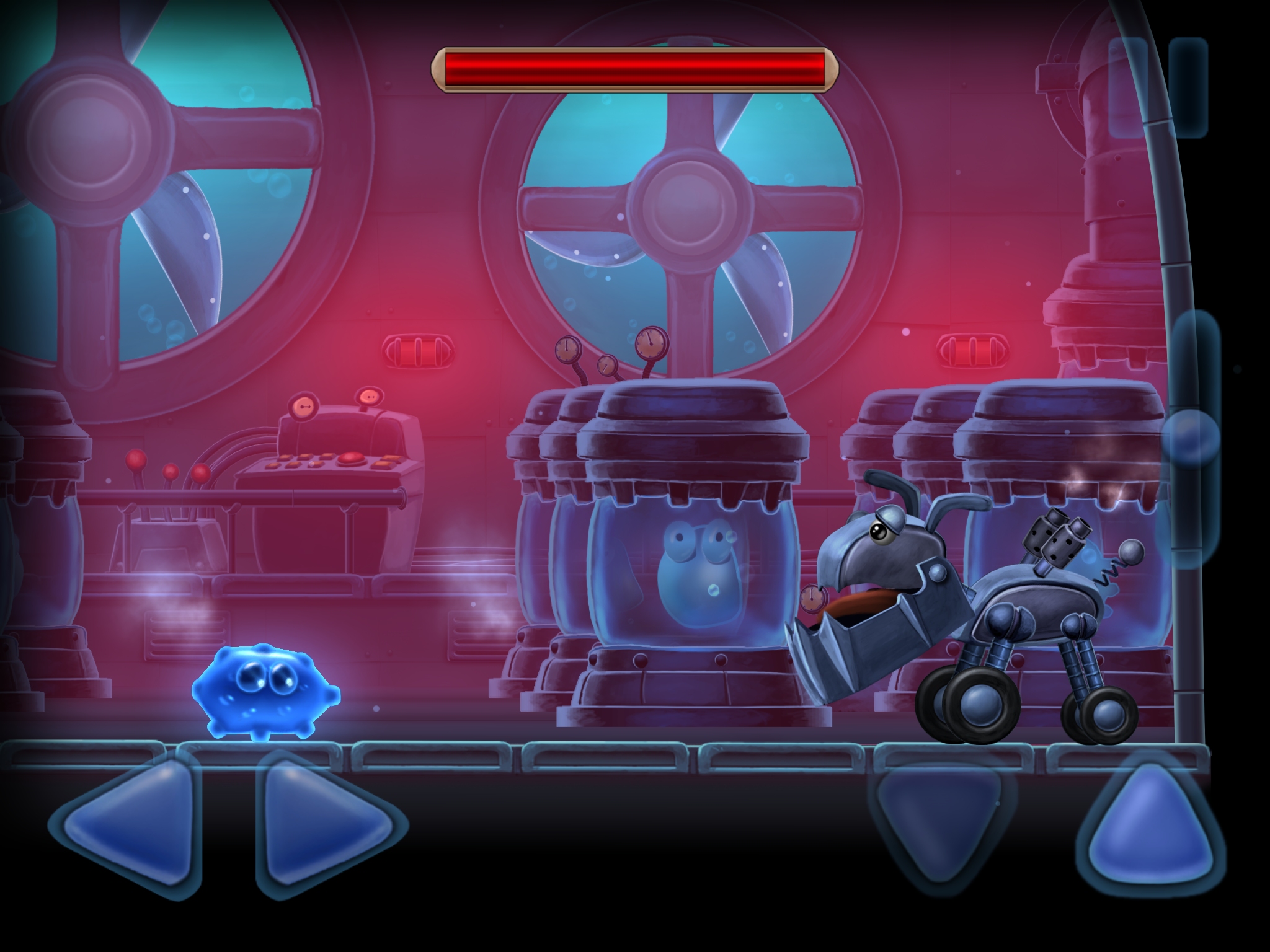 And that’s what keeps me from really, fully enjoying Goo Saga. Each level is fun to play on its own, but knowing that later levels will require the player to have more of the upgrades set and equipped due to the game’s increasing difficulty is a concern. For me, I had to complete every level with all 3 objectives or it wouldn’t feel right. And I struggled to make it through the game since progress felt like such a slog. Even if the game’s upgrade system was perhaps revamped somehow to where there were rewards for completing each objective, I’d like that. To be fair, the current system is a bit more unique than other games with similar star collection, but there’s a reason for that: it’s flexible and adaptable to the player, and encourages returning, versus wiping out a level and then coming back to it. At least this means that Goo Saga‘s going to last you a while, trying to beat the levels and then trying to ace them.

But really, Goo Saga can last for an eternity thanks to its level editor function. Well, this is the problem with user-generated content, as there appeared to be 6 levels when I loaded this one up, and one was an auto-playing level. It’s a cool functionality, and one that creative types and Super Mario Maker fans might enjoy, but the level editor seems maybe too deep for most people to use. It’s a great add-on functionality, but I think you can judge the value of this game with or without the level editor.

I have to give Goo Saga a solid recommendation, ironically enough. I have my qualms with the upgrade system, but the core game here is more than strong enough to recommend on its own. And the progression issues may not matter as much if you are particularly skilled, or if completionism is not a factor for you at all. But if you want a platformer with a fun premise and great production values, do check out Goo Saga.