Growing up in the 80s, I saw a ton of sci-fi films. Whether they were dramatic masterpieces or oozed cheese and camp I loved them all the same, and the numerous references in modern day media like Turbo Kid, Kung Fury, or Far Cry 3: Blood Dragon are palpable. Sometimes creators just go all out in their unabashed love for the era, and that passion shines through in Cruise Control (Free) — albeit, in light of some unfortunate IAP peddling. 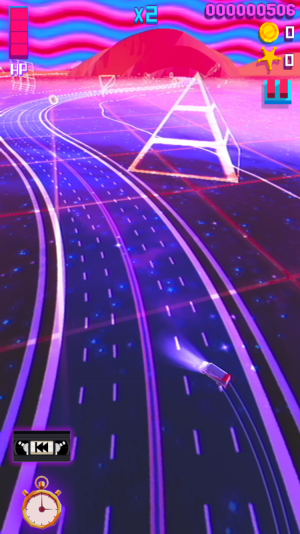 An endless racer of sorts, players are placed in a vehicle in a dystopian environment of sorts where anything goes. Live volcanoes erupt near highways, everyone is out to get you, and it’s perpetually nighttime (a perfect time to wear shades). It’s ridiculous, and the game revels in it. To get around, you’ll only need to swipe to change direction, and occasionally tap down in the bottom left-hand side of the screen to trigger a power-up. The default control method allows for precision driving, where players can place a finger on the screen steadily to ensure that they’re slowly drifting or turning in their desired direction.

If you want, you can swerve around to your heart’s content, but it’s not necessarily a requirement. That is, unless you turn on the harder “Totally Radical" setting, which uncontrollably forces your car to never stop drifting. It makes for a very unique experience and is worth trying out after you’ve mastered the core setting, but both modes are fun and almost different gametypes in their own way.

Naturally, this is great for one-handed play, making it a perfect game to mess around with when you’re feeling lazy. But what I really like about Cruise Control is how intuitive the power-ups are. You have a rewind feature that allows you to go back in time to avoid mistakes, and a time slow clock, which can be toggled off and on to get out of tough situations. That last bit is crucial, as I found myself flipping back and forth between time when a number of hazards appeared. While driving around and avoiding things is enough control as it is, having that nuanced power-up mechanic in there pushes it over the edge. 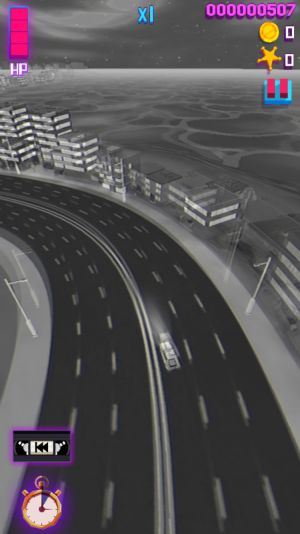 The VHS aesthetic not only looks cool, but it displays the action in an easy to read format without having too much grain getting in the way. Every explosion, vehicle, or obstacle can be seen clearly, so there’s no guessing involved when maneuvering around. That includes overhead attacks from helicopters or cop car strikes from behind. And speaking of those absurd enemies, Cruise Control fully embraces the cheese factor. I love how everything is exaggerated, and a police officer might swerve directly into you, miss, and blow up on the side of the road. When the soundtrack is pumping, lava is swirling right next to you, and events like that are happening a mile a minute, it can illicit more than a few smiles.

The way Cruise Control is monetized looks fair at first glance given its free price point that doesn’t require you to spend money upfront, but lurking underneath is a very unappealing package. Much like Crossy Road extra playable vehicles are $0.99, but coins can be used to unlock random cars. So far, so good, especially since we’re just talking about cosmetic, optional content and nothing that directly impacts the game, right?

Well, there’s also the ability to buy “Rewinds" (25 for $0.99), that are like extra power-ups of sorts, and grant players extra lives after death. Alternatively, you can pay $4.99 to unlock the “Premium" version of the game (that actually isn’t that premium) that eliminates ads and doubles your coin earn rate (which are sold piecemeal for $2.99 each). Then there’s a car pack for $9.99. Phew! It’s aggressive for sure, but I didn’t feel the need to buy anything and felt like I got my money’s worth, so to speak. I do wish the “Premium" option just unlocked most of the game though.

Barring a massive storefront that only seeks to confuse the player and funnel them into shelling out more than they should, Cruise Control is a fun nostalgia way to pass the time. Whether you’re racing through a canyon in an attempt to avoid a pterodactyl to shoot lasers or just listening to the spot-on soundtrack, it’s worth checking out.