The RTS genre is one I remember fondly. Micromanaging troops and building an empire is an unparalleled joy in some cases. For some titles, it was all about just getting through the day, and taking out an enemy force. But for others, it was about managing an economy, and growing over time to support your people. They’re the kind of games that lend themselves well to short or marathon sessions, where you can just pop in, stress free, and take care of business. The mobile arena is a perfect fit for that type of game, and The Battle of Polytopia (Free) is happy to accommodate. 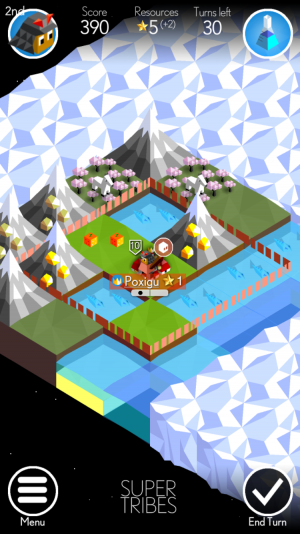 Everything is intuitive from start to finish. Players kick off the game by choosing a tribe (anything from aesthetics based on the Romans or Vikings), all of which host a straightforward advantage — like in the case of the former, a better climate for growing fruit. Then you’ll choose the amount of opponents to face (1-3), and your difficulty (easy, normal, hard, crazy), and you’re off. Your job? Get the highest score possible through any means necessary, whether that’s building more structures or gathering resources.

Control-wise, the game doesn’t even need a tutorial, though there are a few quick tips to assist you on your travels. The Battle of Polytopia is turn based, and a resource counter (denoted by stars) highlights your maximum move count during each turn. So for instance, you may have the option to build something, harvest fruit, train a new warrior, or explore, and all of that costs a specific amount of stars. How you choose to approach the game is up to you, and every action is done with a simple tap.

I love the visual style, full stop. It’s bright and has a papercraft vibe to it, and the screen real estate is just fine for checking out everything available. The text and UI size is basically perfect, so you won’t need to squint to see anything even on a phone, nor will you feel frustrated by tapping on the wrong portion of the map. By tapping on the research icon players will open up a giant tree, providing tech advancements like hunting, fishing, or even climbing — which again, costs resources. Since every game is ostensibly different, players may want to adjust their style according to that game, trying out new tactics and ways to approach the enemies at hand. 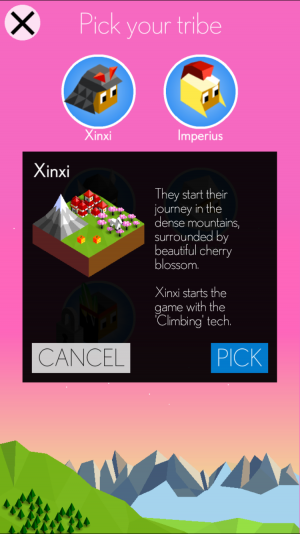 The game doesn’t withhold any information from players, which is great for strategy newcomers. By tapping on a piece of the grid all the info you need will pop up, which typically explains how many resources are required to trigger a specific action, or how to progress through a certain type of terrain. It’s helpful without feeling patronizing, and even veterans will appreciate the effort.

Once the 30 turn marker hits, that’s all she wrote. The game ends, and your score is tallied (taking into account difficulty levels, how big your creation is, and so on), and then you’re off to start a new journey. It’s a very linear session in a way, which may turn some people off. But to me, it’s conducive to the mobile playstyle, where even if you decided to engage longform, nothing feels draw out to the point where you feel the urge to put down your phone or swap to another more exciting app. Yep, it just has one mode of play, and that’s “go.” There’s no extras involved or advanced options — you take the hand you’re dealt.

This is an easier pill to swallow because IAP is basically nowhere to be found in this game, which is great news since other strategy tiles are often bogged down by it. I said “basically” because there is the option to buy an extra army, but it doesn’t really make a consequential difference in the sense that you feel like you’re missing out by not having it. In other words, there are no timers, no annoying currencies to have to grind for or buy — it’s all just there. It sounds absurd, but the fact that the developers weren’t greedy pays off in the end, since the pacing is kept up throughout given that the experience is balanced around not paying, or attempting to make people pay.

The Battle of Polytopia does one thing, and it does it well. There’s really no secret Easter eggs to discover, no advanced strategies or mathematical equations that you’ll have to decipher that you won’t find out for yourself after a few hours of play. It’s a great city building game that’s free of the shackles of “freemium,” and every strategy fan owes it to themselves to give it a shot at some point.