I quite enjoyed Rope Racers (Free) in my review last week, and in fact I’m still playing every day. Flying through each level via ropes and trying to beat nine other people to the finish is incredibly fun, but unfortunately the game has just about every free-to-play mechanic you can think of. There’s a slot machine, two currencies, a stamina meter, and several other timers. It’s far from the worst I’ve seen, but it can hamper your progress if you’re not careful. Fortunately, I managed to unlock all 20 leagues and most of the characters since it came out, and I’ve compiled some of the tips and tricks I used below. 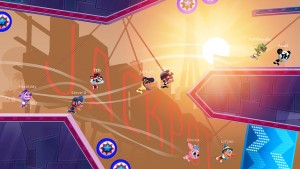 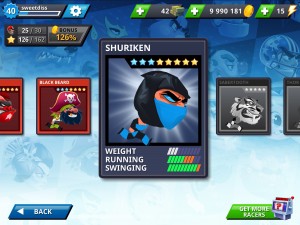 There are 30 different characters in Rope Racers, and each has several upgraded versions that change their appearance and stats. Each also has a star rating to show its rarity and level, with ten common (one star) characters, eight uncommons (two stars), five rares (three stars), four epics (four stars), and three legendaries (five stars). Each character also has three additional stars that can be added to the original amount to show your character’s power after upgrades.

These upgrades typically add up to four stat points, spread across Weight, Running, and Swinging. The prices for these upgrades may seem slightly outrageous at first, but trust me–if you stick with the game, you’ll be earning way more than you can possibly spend eventually. Interestingly, I’ve honestly never been able to tell the difference between the base character and its upgraded version, as they all seem to feel pretty much the same. It’s still worth it, though, just to see the way the characters’ appearances changes (and for the additional stars–you’ll see why soon!).

New characters are obtained through a slot machine, with common characters being the easiest and legendaries being the most difficult (as you’d expect). Luckily, since there are only 30 characters total, you’ll soon run out of the more common ones and start getting rarer characters more often. You can also get a 5,000 coin pack in the slot machine, but eventually you’ll get to the point where 5,000 is basically nothing and it just serves to slow down the rate you collect epics and legendaries. 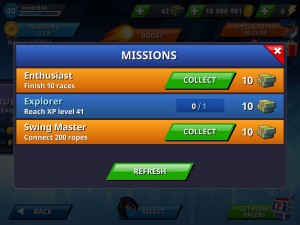 Rope Racers has two main currencies: Coins and bucks. Coins are the game’s “soft currency” and are used on character upgrades and race entry fees, while bucks–the “hard currency”–are for interacting with the free-to-play stuff like the slot machine and stamina timer.

You gain coins by winning races (and occasionally through the slot machine, as noted earlier). The amount you earn for a first place win is always double the amount of the entry fee, which basically means your net gain will be half of what it says. For second place the amount won is less, and for third place you’re basically just earning back what you paid to enter. If you place outside of the top three you’re losing money, which doesn’t feel great.

Luckily, each time you collect or upgrade a character, those new stars go toward a percentage increase in your wins. For example, if you start with a three-star character and upgrade it three times, you’ll be getting a 9% increase in the coins you win! One of the best tips I can give is to always upgrade your new characters as much as you can afford, because those additional stars mean more money later. (After collecting and upgrading most of the characters in the game, I currently have a 126% increase in the coins I earn. Sweet!)

As for bucks, these are earned 10 at a time by completing daily missions. These missions are usually pretty easy to complete, like “connect X amount of ropes” or “win two races in a row”. (Always refresh it when you have the option! Don’t get hung up trying to complete a difficult objective when you can easily get three more that are worth the same amount.) There’s also a daily reward just for opening the app every 24 hours, and while the amount varies, you can always double it by watching a video ad. Finally, most levels have bucks floating in the air that can be collected.

The slot machine costs 100 bucks per spin, which sounds like a lot, but I’ve been able to achieve at least one spin per day pretty consistently since day one. You can also spend bucks to refill the energy timer, but don’t do that. Why? Because: 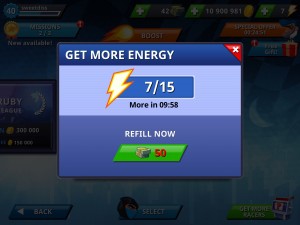 Waiting is free! Don’t ever spend hard currency to refill a stamina or energy timer in a free-to-play game. Hard currencies are usually quite rare (comparatively), and chucking them at timers is a fantastic way to completely run out and be left with nothing.

Rope Racers’ energy timer consists of 15 bolts of electricity, and it costs one to play a race. That may seem like a lot of energy to play with, but it runs out much quicker than you think considering each race is usually about 30 seconds long. It takes 10 minutes to refill each bolt, too, so you could be waiting up to two and a half hours to fill it completely.

The best advice I can give for dealing with the energy timer is to just find another game and play that for a while. If this is your first time to Touch Arcade, might I suggest perusing our incredible forum community for game recommendations?

I usually don’t play a lot of the games I review for very long after the review goes up (even if I like them!), because there are just too many on the App Store, with tons more coming almost every day. Despite that, Rope Racers has managed to make its way into my daily rotation for weeks now. It’s super fun and incredibly compulsive, even though it has nearly every free-to-play system I can think of. Hopefully this guide will help you understand how those system work and–more importantly–how to use them efficiently to get more bang for your virtual buck. Happy swinging!