Swinging from ropes is fun. I don’t know why, but it is. Many of my favorite games on the App Store use some kind of swinging as a mechanic, from Hanger World (Free) and Mikey Hooks ($1.99) to the long forgotten Rock Runners and Slingshot Racing ($0.99). In preparation for this review I did a brief Google search to figure out what is so satisfying about swinging, but all I found were adult advice columns. (Some iOS games call it “hooking"; maybe I should have searched for that instead?) Perhaps it’s so fun because our ancestors lived in trees, or because it hits some perfect combination of speed and weightlessness. Who knows! Developer Small Giant’s latest game Rope Racers (Free) is all about swinging, and it pretty much nails that sensation. 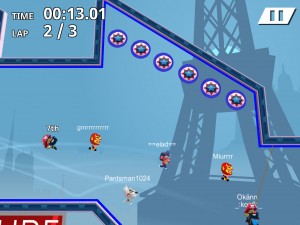 In some ways, Rope Racers is the perfect mobile game. It has one-touch controls, bite-sized levels, and gameplay that is easy to understand right off the bat. Unfortunately, it could also be considered an example of everything wrong with mobile gaming, since it’s not terribly deep, looks kind of generic, and is loaded with free-to-play hijinks. Let’s start with the good stuff, though.

I really like the way the swinging feels. Each time you tap the screen, a rope extends from your character at a 45 degree angle, and it attaches to the first obstacle it touches. Each level is designed with a pretty good mix of wide open spaces and platforms to hook on to, and when you get into the zone and have a lot of momentum behind you it can feel really, really good. Especially when you win first place.

So yeah, it’s not just swinging. It’s also racing. Each level has nine other people with you, and you’re all trying to finish three or four laps in the fastest time possible. That’s a bit misleading, though, as it’s actually their ghosts that you’re racing (as far as I can tell). I’m glad they made that choice for two reasons: No waiting around for matchmaking, and no collision detection when you hit another player. It’s very streamlined as it is now, and hopping from race to race is about as quick and frictionless as possible. 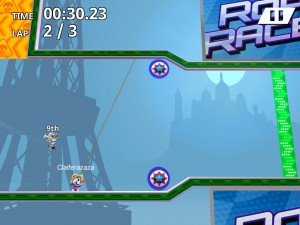 Now for the bad stuff: The game has pretty much every free-to-play mechanic you can think of, with multiple timers and currencies, a stamina meter, and a slot machine to get new characters of varying rarity. Before I dive into these things, though, let me be clear: It’s definitely not the worst monetization scheme I’ve seen, and in fact I’ve gotten a lot of enjoyment from the game without spending anything. Still, just the existence of this stuff makes some people’s blood boil, so let’s get to it.

The worst of the free-to-play stuff, in my opinion, is the stamina timer. You can do 15 career races before it runs out, which sounds like a lot, but really isn’t since most races take about 30 seconds. I actually timed it once, and it took me about 10 minutes to blow through all my stamina in one go. For many free-to-play games (like city builders and what-have-you) having a 10 minute session isn’t bad, and in fact could even be considered long. But the thing is, the gameplay in Rope Racers is really awesome and I can’t help but feel disappointed each time I’m forced to toss it aside. (Of course, I’ve managed to make it quite far in the game over the past week or so despite the 10-15 sessions, so maybe it’s good the stamina timer’s there so you can’t blow through the whole game in two days.) 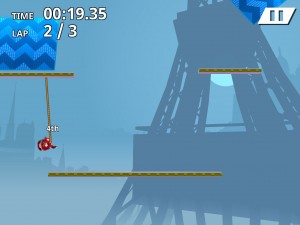 The other part of the monetization I’m not particularly fond of is the fact that you have to pay to enter most races. Yep, they don’t just cost “energy”, they cost currency as well. In practical use it’s really not that bad, since the payout you get for placing in the top three is always profitable; psychologically, though, it just bums me out seeing that the “prize” for a race might be 8,000 coins, when it’s actually half that since it might cost 4,000 to enter. And that’s not even considering the fact that you could easily not place in the top three and end up losing money.

Luckily, the dual currency system in general isn’t particularly problematic. You get coins and bucks for racing and completing various goals, and they tend to flow fairly liberally all things considered. I never really felt like I had to grind to upgrade a character or buy a new one, and the payouts for winning races later in the game go up quite substantially. (I’m in the Sapphire League currently, where you get $130,000 for winning first place. The Beginner League, by comparison, awards a mere $100.) Maybe the currency system is so generous to offset how mildly frustrating some of the other parts are? Who knows.

Despite those complaints, though, at the end of the day it’s still a super fun little game. The rope swinging feels great and the racing is fast and fair. (Well, you can use a speed boost every few hours if you watch an ad, but you’re not actually racing in real time so that doesn’t bug me too much.) Still, even though I get excited when I check in and find that my stamina is full, I can’t help but wish it wasn’t there at all (or lasted longer, or refilled faster) so I could enjoy the game in longer sessions. That’s just the reality of the current market, though, so really I should just be thankful I can play the game at all, right? Besides, I can always go back to Train Conductor World (Free) while I wait.