With a name like Mediocre, it’s almost like the studio is baiting reviewers. “Go ahead,” they’re saying, “just try to make some lame joke about our games being mediocre.” Of course we can’t say those things, because Smash Hit (Free) and Does Not Commute (Free) (and earlier titles like Sprinkle ($1.99)) were outstanding games. The irony in their name proves the studio is supremely confident in the quality of their products, and they’ve certainly earned it.

That said, their latest game, Dirac ($1.99), doesn’t feel quite as mind blowing as their previous hits. It’s still not “mediocre”, but it’s a considerably more dialed-down experience than Smash or Commute. In fact, it’s nothing at all like their recent output, since Dirac is essentially just a simple line-drawing arcade game. 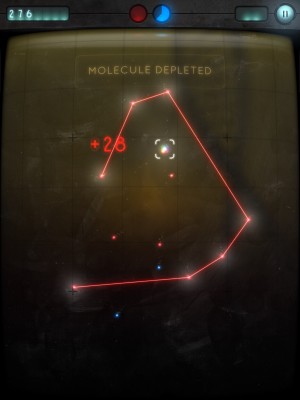 “Simple” is relative, though, as even this game has a bit more meat on its bones than the majority of iOS releases each week. There are five modes, ranging from “Novicium” to “Absurdium”. The mechanics change slightly in each of them, but the core remains the same: there’s a big molecule in the middle of the screen, and every few seconds it burps out quantum particles of different colors. (Note: I’m not a physicist, so go easy in the comments.) In some modes it seems to happen to the beat of the music, which is a really nice touch. Anyway, basically you need to draw lines between dots of the same color to make them disappear, and if any different colored dot hits the line, it’s broken and you have to start over. If any particles fall off the screen, the molecule at the center of the screen shrinks. If the molecule disappears entirely, it’s game over. Maybe even for the whole universe.

There’s a bit of strategy involved as well, because if you manage to create a closed circle with your line drawing, you’ll capture every other particle inside (even if it’s not part of your line). This leads to a lot of frantic moments where you’re trying to delicately navigate the hordes of dots without touching any of the wrong color, and closing the circle before it gets too big and expands off the screen.

It can be incredibly difficult after a few minutes when the screen is a chaotic mess, especially in the later modes where the challenge ramps up considerably. Unfortunately, it can often be extremely frustrating since you can’t keep track of every dot on screen, and eventually one is going to ruin your circle-making. Making things even harder is the fact that the dots are tiny and human fingers are inelegant meat sticks, so you’re constantly stabbing and dragging around the screen with some of your view blocked. 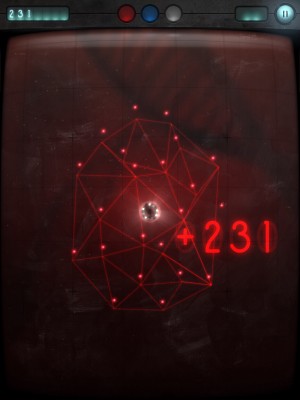 That said, when you do pull off one of these circle maneuvers, it can feel like quite an accomplishment. Especially when the screen is full of dots and you capture 90% of them with one unbroken line. It does wonders for your score, too, and I often found myself intentionally waiting until the screen was full before drawing any lines. Another helpful addition for achieving high scores are special smaller molecules that bump your multiplier up when you capture them.

As I mentioned earlier, there are five modes (difficulties) total, not including “Tutorium”. The first one is not much more than what I’ve described so far, and the rest typically add new elements (like white particles so you have to deal with three instead of two) and ramp up the frequency with which the particles appear. Also, when you achieve a specific high score in any of these modes, the circle surrounding that mode’s icon will fill, giving you something to progress toward.

I like Dirac. It’s a clever idea that works pretty well on the touchscreen, and there’s plenty of content to keep you engaged in the form of extra modes with slightly tweaked game mechanics. I also really enjoyed the particle physics theme (or is it chemistry?), and it all comes together in a package that feels quite different from Mediocre’s other games. Of course, all of their games are quite different from one another, so in that respect I suppose it’s not that surprising at all. That said, it was slightly frustrating interacting with the tiny dots on the screen at times since your hand and/or fingers could very easily cover the action. (I played on an iPad, and can’t even imagine trying to get a high score on a phone.) It’s not quite as inventive and genre-busting as some of the developer’s other recent games, but it’s still quite far from being just “mediocre".