We here at Touch Arcade don’t usually review the many, many free little arcade games that pop up on the App Store each week. There’s no rule against it, of course, but the fact is there are just too many games, and our time is usually better spent focusing on (slightly) meatier experiences. For example, just last week saw the release of Slingshot Rush (Free), which is yet another fairly shallow little Boombit game like the many others that came before. I actually found it incredibly fun and satisfying to play, but it’s ultimately too simple to fully review. I mean, you hold the screen to swing around corners and it’s really fun. I don’t even think a gimmicky question-and-answer format could stretch that out enough to count as an actual review. 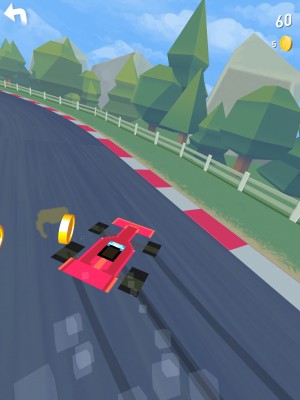 All that said, sometimes a little game with a single, simple mechanic comes out that is so good that I feel like I need to review it, if for no other reason than to try to figure out how on earth the developers created something so compelling from so little (and, of course, to bring the game to the attention of a few more people.) That game, this time, is Thumb Drift (Free) by the ever-dependable SMG Studios.

Guys and gals, I’m completely smitten with this game. There’s nothing quite like executing a perfect drift through a tight turn in a racing videogame, and Thumb Drift exclusively focuses on that one feeling. I instantly understood what they were going for when I saw the game’s trailer a few weeks back, and I’m thrilled to say they completely pulled it off.

Drifting in a Real Game™ (you know, on a console or PC) is satisfying enough with a controller, but I think it might feel even better here on the touchscreen. All you do is slide your finger back and forth behind your vehicle to sort of push it side to side, kind of like Smash Cops ($4.99) and its follow-up Bandits (Free). It feels like a simpler, more tactile way to steer a car and I wish more racing games on iOS adopted a similar method of control. It may not be quite as precise as a D-pad (or even tilting), but it’s incredibly fun and feels very natural. Especially when all you’re doing is sliding around. 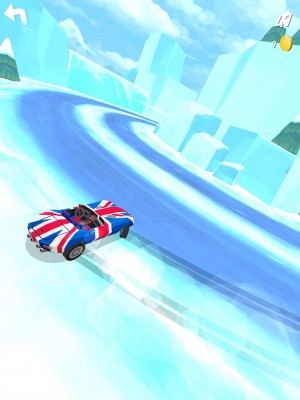 Some people in our forums have mentioned the controls feeling a little loose and hard to get used to, but on my iPhone it feels absolutely perfect. It’s a bit hard to control, sure–but that’s part of the fun. And the great thing is, it really does feel like with enough practice it’s a skill you can master (eventually) and be able to drift much, much farther. However, on the iPad (where I do most of my gaming) the default controls don’t feel quite the same as on iPhone, since the screen is much bigger and you basically have to use your index finger. Luckily, the devs smartly included a sensitivity slider, which I promptly cranked all the way up so I could use my thumb while holding the iPad in both hands. This makes it control pretty much identically to the iPhone version, which is good since the game looks great on a big screen.

Of course, it looks pretty darn great on a small screen as well. The App Store description amusingly describes the visuals as “cutting edge, flat shaded, low poly graphics”, which is accurate, more or less. In practice, it reminds me of Landsliders (Free) mixed with Turbo Dismount (Free), so if you’ve played both of those games (and you absolutely should play both of those games) then you know what to expect. Dismount, in particular, is apt since when you crash in Thumb Drift your vehicle will explode and pieces of it (including the driver) fly off in all directions, seeming to loosely follow some kind of cartoon physics. It’s a fun little addition, but I do wish the game’s replays were longer and you could watch all of it in slo-mo like the aforementioned game as well.

In fact, the replays being a bit on the short side is basically my only complaint with this game right now. And that’s such a minor thing that it barely even counts as a “complaint” at all. In truth, from where I’m sitting Thumb Drift is nearly perfect as far as fun little highscore chasers are concerned, and the central mechanic is just ridiculously fun and feels like butter. There’s also a light mission system and tons of cars to collect to keep you going, but even if those things weren’t there, I’d still be playing every single day. Plus, the game is free (with occasional ads that you can disable with a purchase), so you basically have no excuse to not at least give it a try to see if it clicks with you. Please do, and then tell your friends, because I want this updated forever.