Asdivine Menace (Free) represents something of a benchmark for prolific JRPG publisher Kemco. While it’s not the first time they’ve released a sequel, or even the first time characters have returned from a previous game, this is the first time they’ve put out an RPG where the story directly follows up on the game that came before, right down to sharing the same main character. While you don’t need to have played Asdivine Dios (Free) to enjoy this game, if you have, you’re going to get a lot more out of it. Furthermore, playing even a short way into Asdivine Menace will completely spoil the story of Dios right down to the ending, so tread carefully if you haven’t finished that game yet. It’s not just a follow-up in story terms, either. Unlike previous Kemco sequels, this game actually keeps all of the gameplay systems from the last game, adding only a couple of new things of its own. For some, this game might prove to be too much of a rehash from a publisher that already recycles a little too much, but if you enjoyed Asdivine Dios, I think you’ll be happy with where this sequel takes the story.

As with the last game, you’ve got a choice between two versions. The free version of the game is ad-supported, and like all Kemco games, it has an IAP shop where you can buy various cheat items including an experience doubler, an item that increases drop rates, and so on. You can earn the points used in this shop by fighting battles, or you can pay some real money if you want to cut to the chase. The premium version of the game includes 1500 of those points, which would normally cost more than $9.99, and disables the ads permanently. If you’ve started with the free version and want to disable the ads, you can do so by buying a $3.99 IAP, which also includes 1200 points. Without any of the doubling items from the IAP shop, I would say the game is slightly stingy but certainly not unenjoyable, so it’s up to you as to whether or not you want pay out some cash to make things easier on yourself. 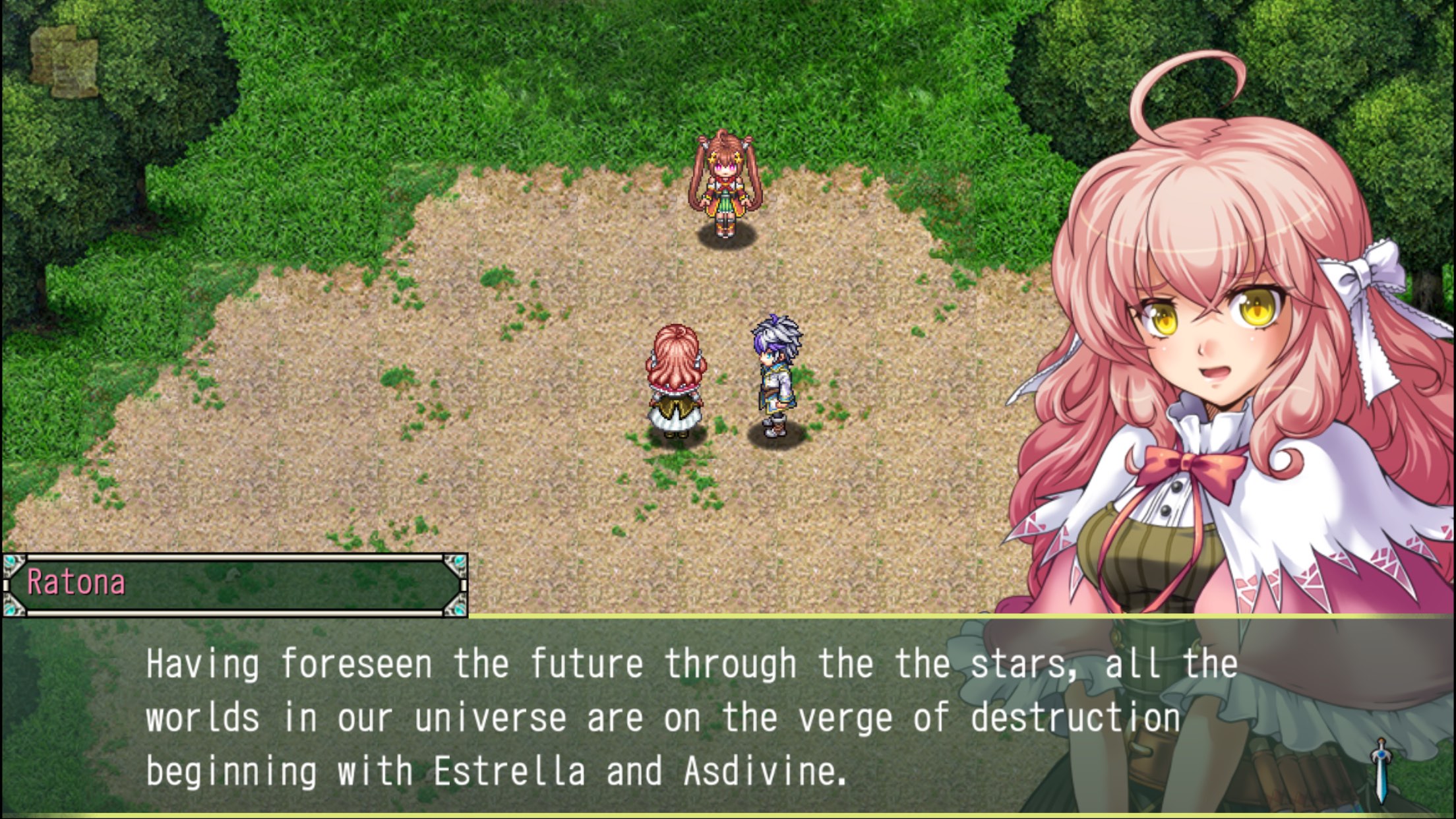 The story picks up 100 years after the events of the first game, with the world of Asdivine’s deity Izayoi once again serving as the main character. He’s a lot more relaxed and comfortable around humans as a result of his previous adventures, but he’s also lost a great deal of his power through sharing it with his world’s inhabitants. That’s as good a reason as any to de-power him down to level one, I suppose. His faithful helper, the spirit of light Iris, comes and asks for his help in dealing with an unknown spirit going wild in the nearby forest. It turns out to be a light spirit from another world whose deity has sent for Izayoi’s assistance with a threat to the very universe itself.

This kicks off a galaxy-spanning adventure that takes Izayoi to four different planets. As in the previous game, he’ll recruit three different spirits into his party. They also serve as potential love interests, should you choose to pursue them. As for the spirits from the previous game who you may have already romanced, they’ve been demoted to chopped liver status, making portrait-less cameo appearances near the start of the game and more or less disappearing after the first hour or so. Izayoi, it turns out, is not just a god, but also a dog. 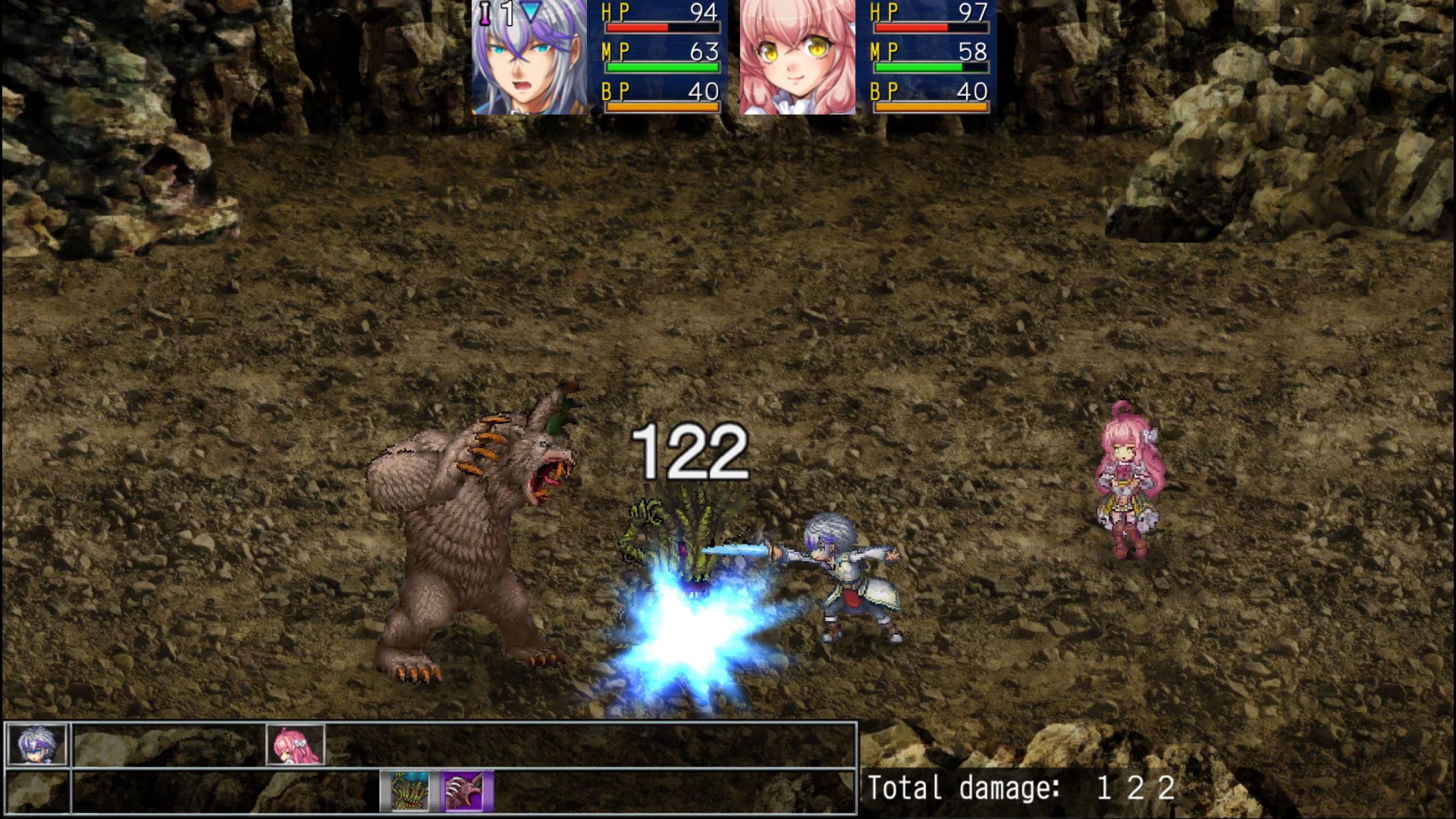 Asdivine Menace has a very slow start where you go through nearly identical motions to the beginning of Dios. You’ll hit the same initial dungeons, visit the same couple of towns, and hear very similar explanations, with Izayoi giving them this time instead of receiving them. Taken in combination with the recycled music, art, UI, and basic gameplay systems, it all feels a little too bold in its recycling. Things quickly head off in a different direction, however, taking you to all kinds of new situations and places.The graphical and audio assets never stop being recycled, unfortunately, but I’m sure most players of Kemco RPGs have made peace with that idea anyway.

The main cast is unfortunately just as tropey as the one before, albeit with a different set of overused anime stereotypes. As usual for EXE-Create, the characters are written well enough that you might end up liking them a lot anyway. One new problem comes from Izayoi’s return as the main character. He’s already had his main character arc settled in the previous game, so he’s a considerably less interesting protagonist this time around. This puts a greater story burden on the supporting cast, and they’re not up to the task. Luckily, the main plot picks up some of the slack. It’s a lot more exciting than the story in Dios, and the increased stakes are certainly made clear. 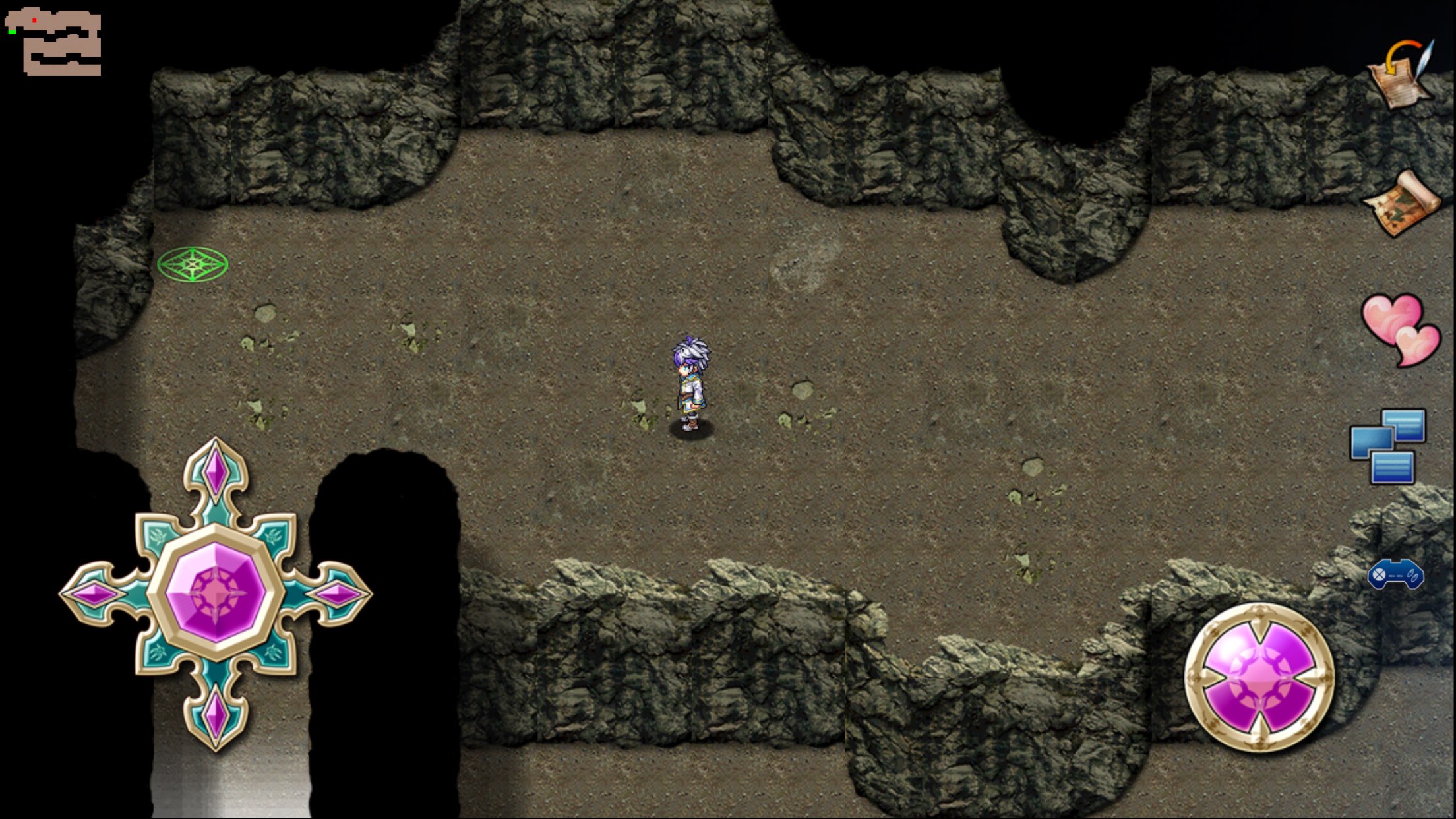 The previous game was one of EXE-Create’s more straight-forward JRPGs. There was a Unison system that allowed you to create combinations of special attacks or magic spells between characters, and an extra gauge in addition to HP and MP called BP that you could draw from to use special physical attacks. Battles were fairly standard turn-based affairs, and your only input into the development of your characters was in equipping different elemental rings that they would learn magic from over time. The most interesting aspect of the game came from the weapon crafting system, which enabled you to combine weapons into more powerful ones. Weapons could pass on their traits when used in crafting, so it was fun to try to game the system and make extremely powerful weapons that could inflict all manner of status ailments on the enemies.

All of that stuff returns in Asdivine Menace (though Unisons are now limited to magic only), but there are a few new things, too. First of all, your BP skills will now level up as you use them, increasing both their range and effectiveness. You recover some BP each turn, and one of the first skills one of your characters learns refreshes the party’s BP at a slight hit to her own. The message is clear: use your BP skills often to get them powered up, because you’re going to need them to be at a high level when the spit hits the fan. 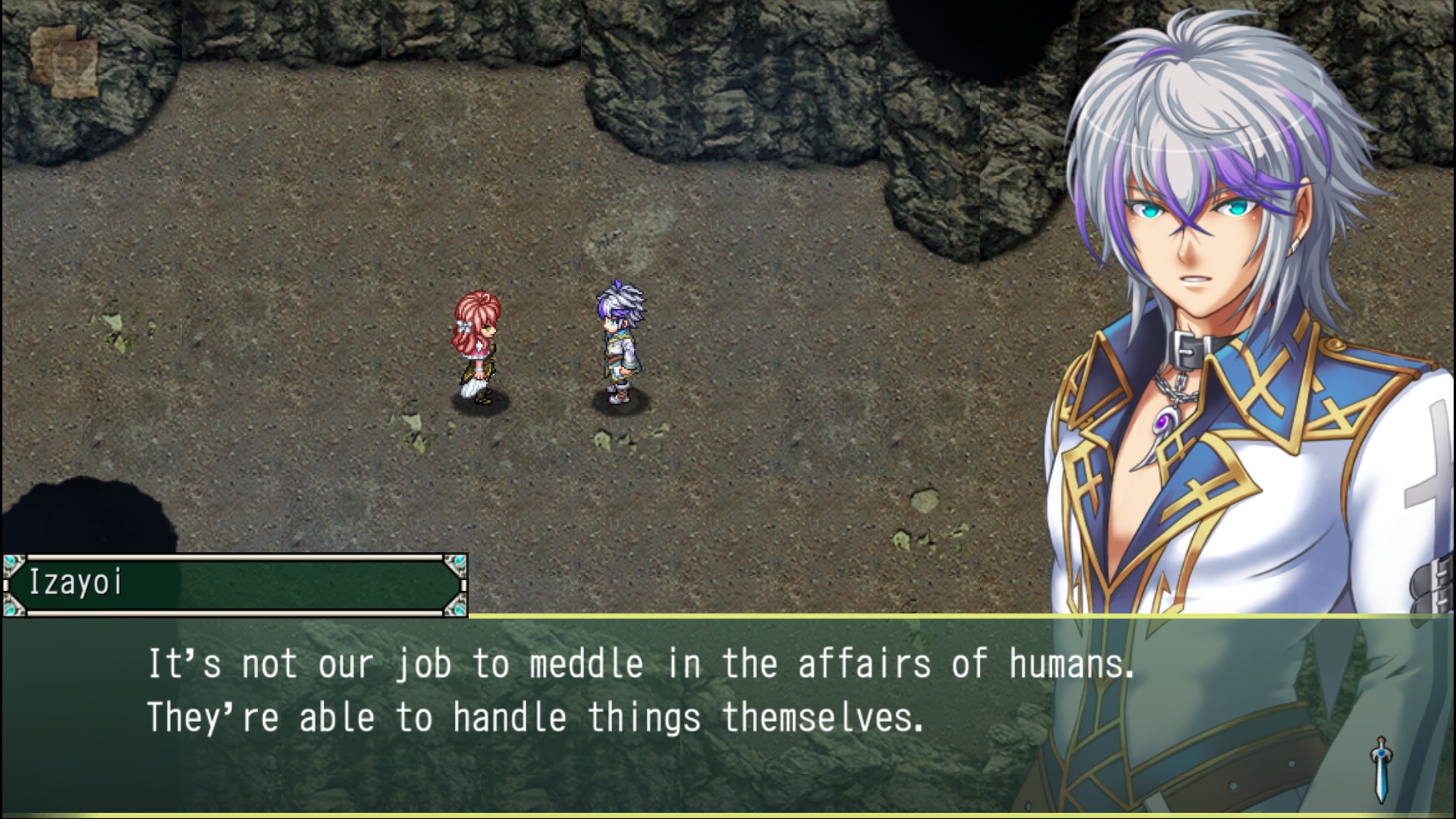 This heavy reliance on special attacks helps battles move more quickly, helping offset the occasional bits of irritation that come from random battles. The other new addition is less exciting, I’m afraid. There’s a new limit break system in place that will occasionally allow you to pop off several BP attacks in a row, which is great for dealing a lot of damage and leveling up your skills quickly. Don’t get me wrong, I won’t be kicking the limit breaks out of bed for eating crackers, but we’ve seen this particular trick in too many other RPGs for it to light any fires here.

As with the last game, the localization in Asdivine Menace is competent, but lacks the clever charms of previous EXE-Create titles. It sometimes comes off as awkward or overly-literal, though it’s still on a whole other level compared to the localizations done by Kemco’s other developers. I miss the days when I could count on EXE-Create’s English scripts making me smile or even laugh from time to time. I’m also personally not terribly keen on one of the three romance options being a literal example of the “looks and acts like a child, but is actually hundreds of years old so it’s okay" type, but different strokes for different folks, I guess. At the very least, the game has a much stronger set of antagonists this time around, which helps compensate somewhat for any deficiencies in the rest of the cast. 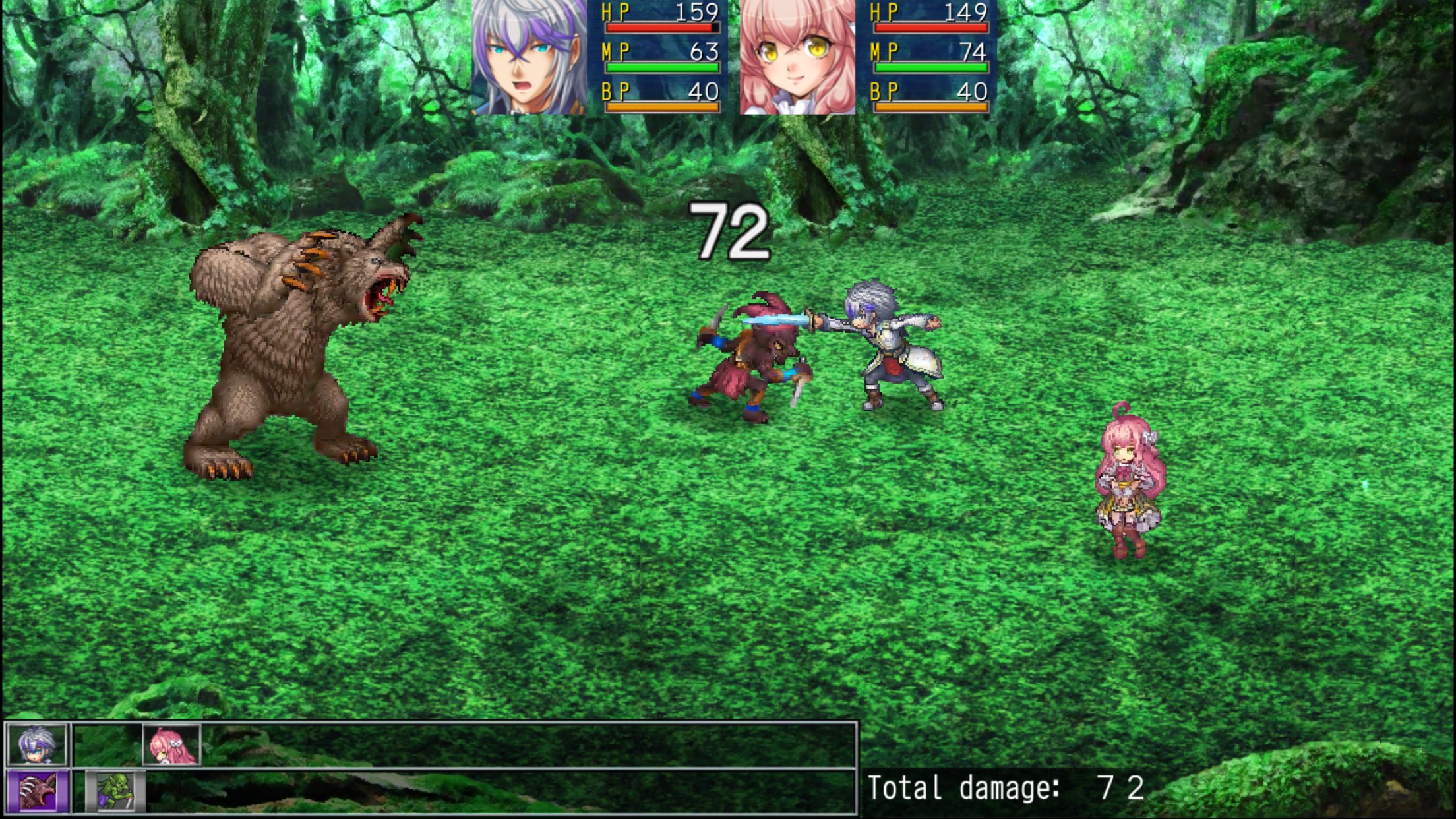 When I first started playing Asdivine Menace, I was pretty disappointed in the game, but in the end, I liked it better than Dios. Some of that can be chalked up to the slightly improved mechanics and more interesting plot, but I’m sure part of it is that I was comparing it to Asdivine Dios rather than Asdivine Hearts ($7.99). This is still not as well-made of a game as the very first Asdivine, but it does a great job of closing out Izayoi’s story and building on its immediate predecessor in sensible ways. If you’re not too exhausted from the recent deluge of quality RPGs that have come out, you might want to give Asdivine Menace a try.