In a way, cooperative board games like Matt Leacock’s Forbidden Island and Forbidden Desert ($6.99) are peculiar animals because for most players, playing a competitive game means competing against other players rather than alongside them. And yet, there are fantastic moments to be had when playing cooperative board games, and Forbidden Desert has plenty of them both because of its mechanics and because of its theme. The race against the ever-strengthening desert storm creates many moments of frustration when salvation is tantalizingly close and yet just out of reach. The port itself initially looks pretty basic, but then, just as the desert you’ll be excavating, it reveals layer by layer a very well-made port that uses subtle animations to bring both the players and the desert to life. While the lack of online multiplayer is definitely a pity (hopefully it will arrive in a later update), Forbidden Desert is a great board game port that should offer many hours of mostly short-lived triumphs as you struggle to survive the desert storm.

Forbidden Desert is all about the struggle of a team of adventurers who having been sent on a mission to excavate an ancient desert city and recover a legendary Flying Machine, manage instead to crash land their helicopter due to an unexpected sand storm. Now, you and your teammates are in a race against time as you try to excavate the city, find the parts of the Flying Machine, and quickly rebuild it before a team member dies from thirst or before the storm gets so intense that all hope is lost and the team ends up permanently decorating the Forbidden Desert. 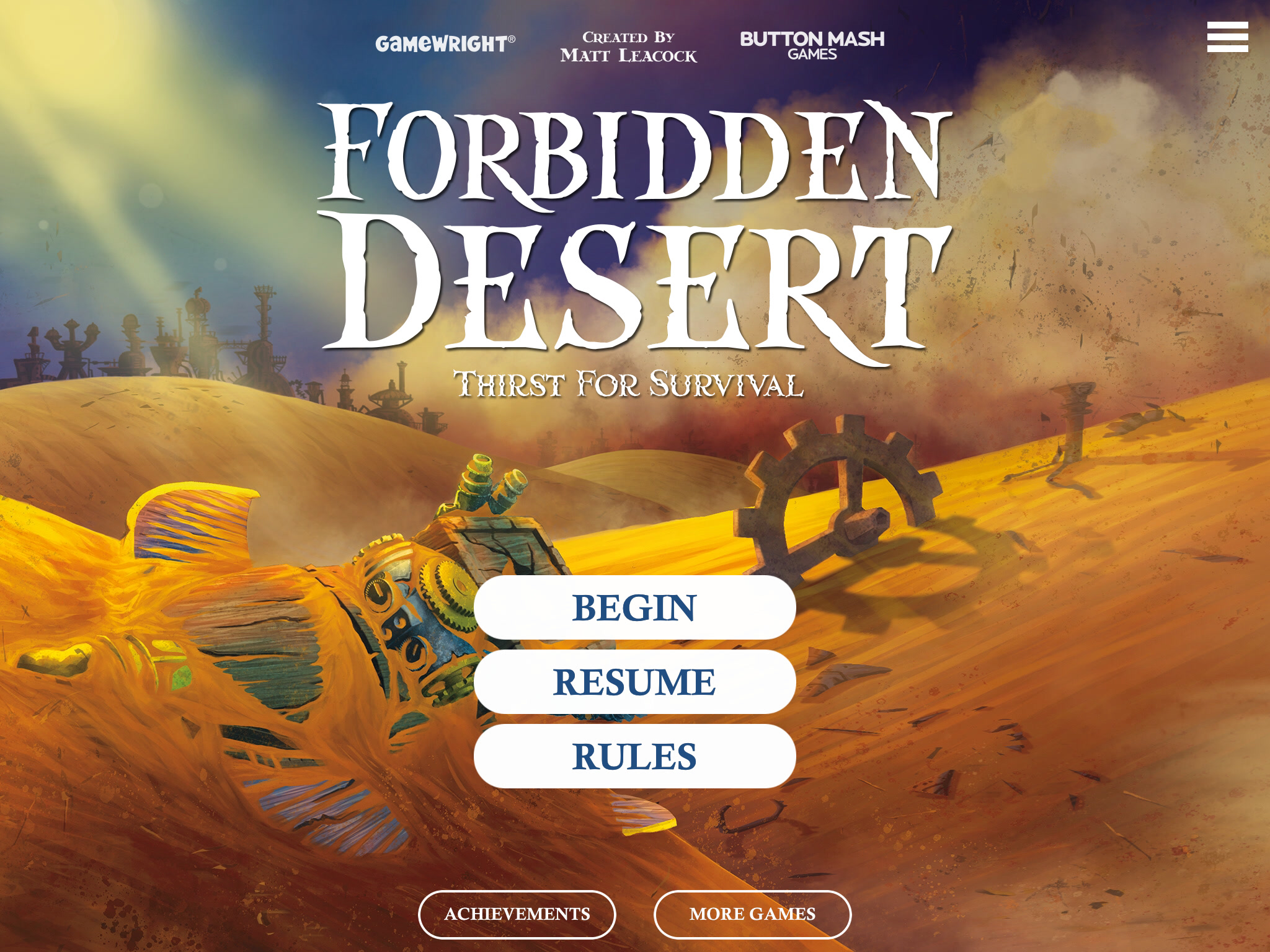 Your team can have between 2 to 5 specialists, each with his own set of skills that can play an important part in your attempts to make it out of the desert. You can either pick manually or let the game pick for you. You have the Explorer, who can move diagonally, the Climber, who cannot be blocked by piling sands and can carry another player when moving, the Navigator, who can move another player up to 3 tiles, the Water Carrier, who can give water to player on adjacent tiles, and so on. As you can imagine, your team’s makeup can make for very different games since each adventurer introduces different mechanics that change the way you go about surviving the desert.

Each turn, one of the players may take up to 4 actions, either moving across the 5X5 board, clearing tiles from sand, excavating tiles, sharing water or passing equipment to other players, and so on. At the end of each turn, you’ll uncover the appropriate amount of cards from the Storm Deck that insert negative effects into the game ranging from the sand moving around the board (shifting players’ position as it does), the sun getting stronger and forcing players to drink one water, and so on. There are 40 sand markers that can be placed on the board, and once they run out, the players lose the game. This race-against-the-clock mechanic is what gives the game some of its best moments since you can’t just take your time exploring but need to rush as quickly as possible while still holding on to a modicum of team cohesion. 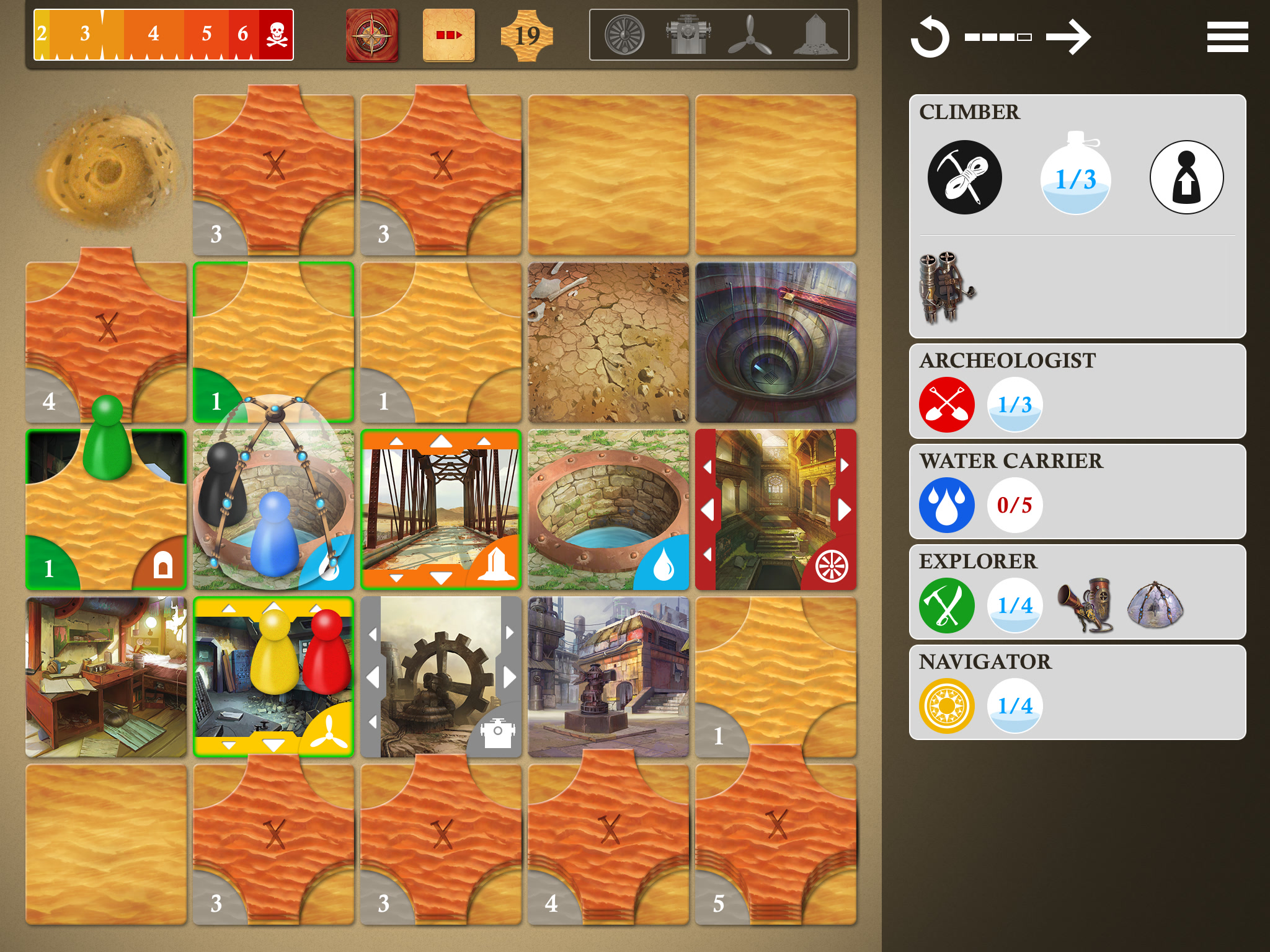 Once I started playing the game, I was immediately struck by the contrast between the wonderfully-animated storm in the middle of the board and the very basic-looking tokens that looked like a missed opportunity. I was expecting the developers to take advantage of the digital medium and give me and my teammates the opportunity to personalize our tokens. My opinion quickly changed, though, when I had my player use various pieces of equipment since those little tokens immediately come to life in a variety of short but very well made animations. These little animations, along with the animated sand shifting and the animated sand deck cards, give plenty of life to the board game and make it alive enough to feel like a digital port but also close enough to the original as to keep purists happy. A great middle ground on behalf of the developers.

The slight animations and the very sharp and well-organized UI make Forbidden Desert quite pleasant to look at, which is great since the player will stare at one screen for pretty much the whole time. The various sand levels on the tiles are clearly represented both with a small number in the corner and also with a visual representation of the sand. The result is I never had doubts as to the state of the board while still avoiding getting overwhelmed with information. Same goes for the state of my and my teammates’ water supply, an essential piece of information that is the difference between winning the game and losing due to thirst. What I would’ve liked to see marked differently was the current active player; as it stands now, the only way to know whose turn it is is by that player’s card on the right of the screen becoming double the size of the rest. I would’ve liked to see some kind of board-side UI effect (like a halo or something) that would have showed the active player more clearly. 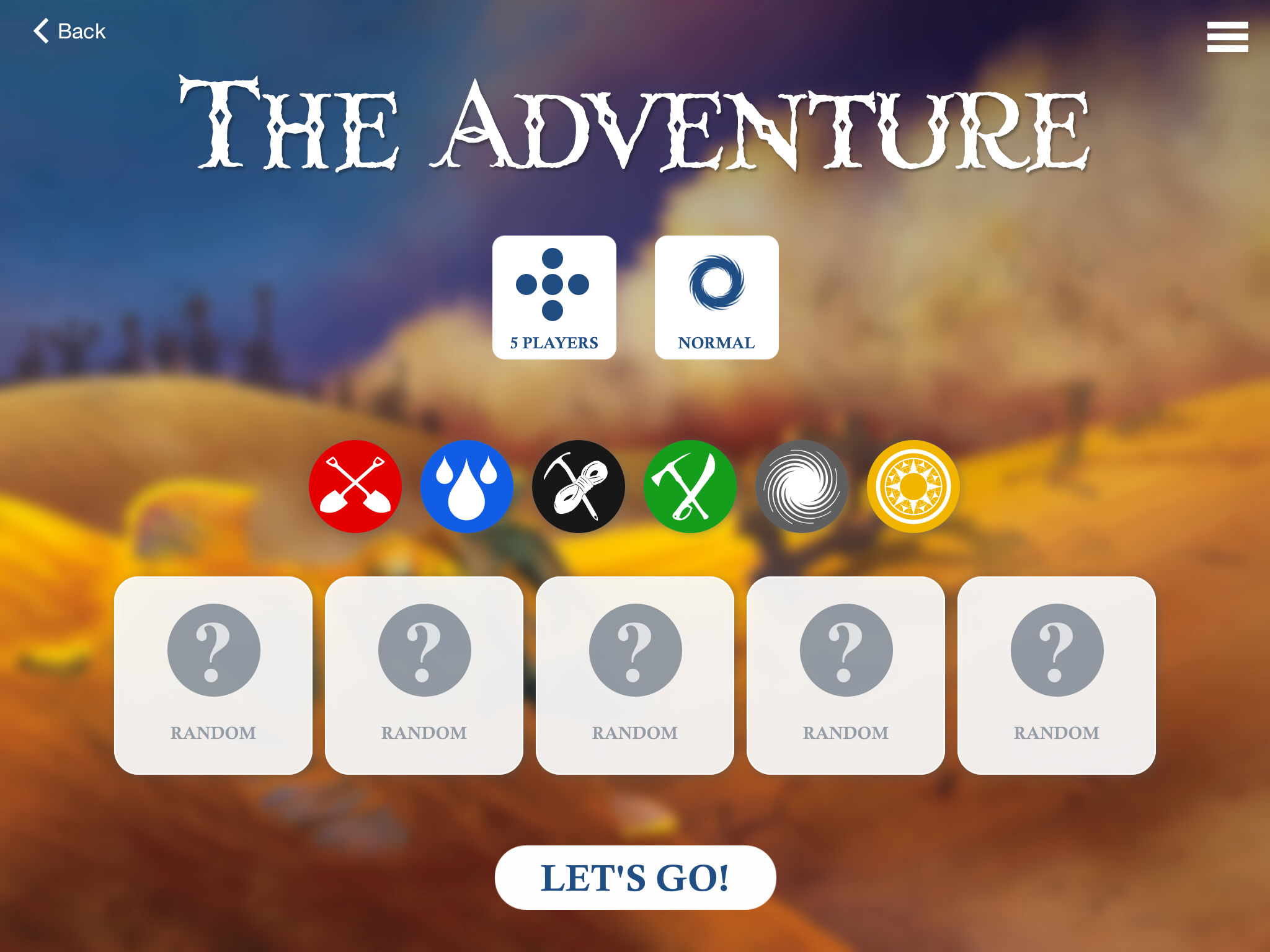 As nice as the game looks, don’t let the nice visuals lull you into a sense of false security in Forbidden Desert because this game is really, really hard. You’ll find yourself dead and buried in sand even on the easiest of four difficulty settings. Frustrating as that can get, it does help make for fun moments between you and your teammates and makes every time you beat the game a great moment of triumph. The game isn’t hard because of unclear or confusing rules; the app does a great job teaching you the game through a tutorial and a lovely manual.

No, the game’s hard because the storm’s relentless pace will push you to navigate the board as fast as you can, and while you’ll be trying to keep players close enough to distribute water between them, the shifting sands will continuously throw sandy wrenches into those plans. Still, all those factors are what make this co-op board game fun as trying to reach that friend in time to give her water before she perishes of thirst makes for memorable moments. 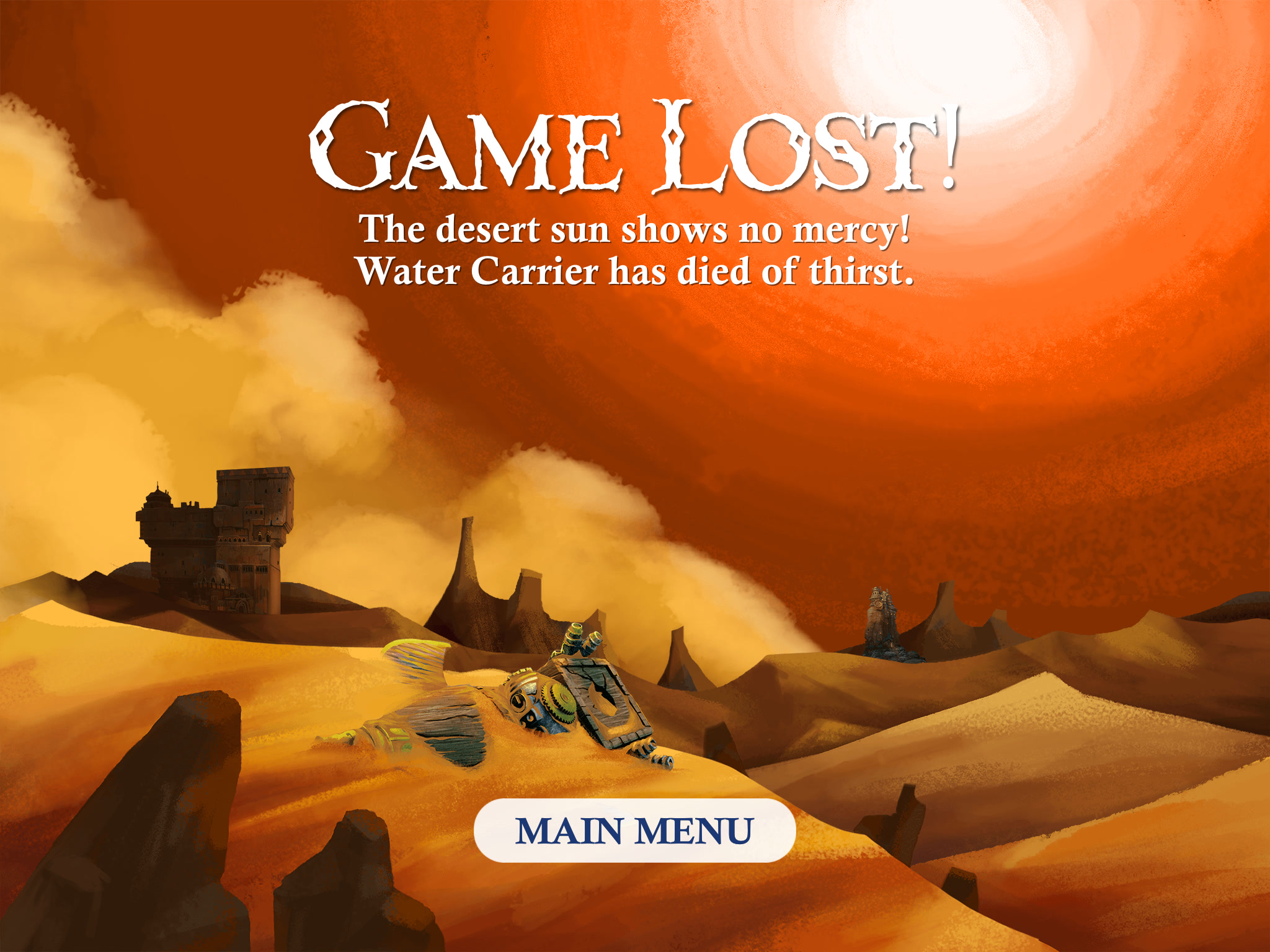 Forbidden Desert is definitely one of the best co-op board games in the App Store, and its subtle animations and digital treatment have situated the port at a place where both board game purists and digital board game fans will be quite pleased. Since the game lacks hidden information, you’ll be able to play the board game by yourself (if you lack friends), and the variety of adventurer skills can make for very different playthroughs and plenty of variety. Hopefully, we’ll get an online multiplayer mode with a chat feature, but even as it is, Forbidden Desert is definitely a great board game port. The game costs $6.99 with no IAPs and is definitely worth your money, your time, and the tears you’ll shed every time you lose.