Tiny Wings ($1.99) is an amazing game. Not a terribly controversial statement, but I’ve always found it kind of surprising that more games didn’t take the idea and run with it. Sure, there are lots of games on the App Store that use a similar mechanic (my favorite, by far, is Kumobius’s Time Surfer ($0.99)), but it’s not nearly as many as I’d expect. I mean, think about how many Threes ($5.99), Flappy Bird, and Clash of Clans (Free) clones there are compared to Tiny Wings. Of course, every now and then a TW-like game will still randomly appear, and the latest I’ve seen is Mountain Biker (Free) by Escape Velocity. 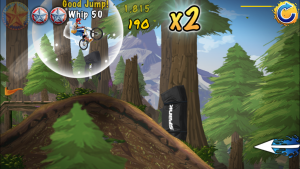 It’s definitely not a clone, though; rather, it uses the same “tap to dive down a hill and release to fly up” mechanic merely as a jumping off point. From there the game adds a swipe-based trick system and a bike racing theme. It actually winds up feeling quite a bit different from Tiny Wings, despite having a very similar “gimmick” when you strip all the fluff away.

At the beginning of the game you have a single bike and barely any moves beyond going up and going down. Each level gives you a main goal and two bonus goals to shoot for, and from there you unlock more tracks to play. The goals are usually score, trick, or time based, and for the most part they don’t leave much room for error (after the first handful, anyway). The further into the game you get, newer tricks will become unlocked which usually amount to swipes in different directions. You can combine these tricks with others by doing several in a row before hitting the ground, and pulling off as many as you can string together in time is essential for getting passing scores. 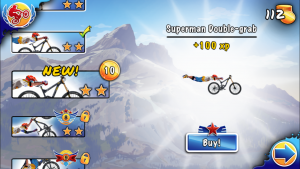 Obviously none of this would work if the controls were terrible, and luckily they do a pretty good job. Beyond the tapping and swiping I’ve already mentioned, you can also tilt your device to line your wheels up for a perfect landing and a small boost. Some of the level goals involve getting a certain number of perfect landings, too, so the quicker you get used to balancing all the screen poking and device spinning the better. One slight issue I had with the tilting is that the game slows the action down when you’re about to land so you can line up your wheels easier, but unfortunately it also seems to make the bike react slower and almost makes it even more difficult. Still, it works, and you get used to it. 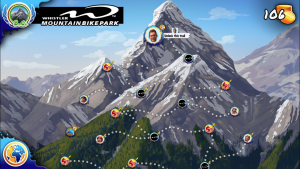 Progression-wise, the game is all about slowly climbing three mountains by unlocking new tracks that snake their way ever higher toward their peaks. You don’t simply unlock new tracks, tricks, and bikes from progression alone, though, as you do have to pay for them. Luckily most things in the game tend to be fairly cheap at first, but after the first mountain the costs start going up while the amount you earn stays fairly low. You can always replay earlier races, of course, but it’s still frustrating that you have to pay for literally everything as you try to progress through the game.

The game’s presentation is kind of hit or miss as well. The art in the game is colorful and fun, and almost comic book-like in style. There are real life BMX pros in the game that are represented in this kinda realistic, kinda cartoony style, but I don’t follow that scene so I can’t really say how faithful they are. The bikes themselves look great for the most part, but look slightly wonky when doing tricks. For example, when a bike tilts to one side or the other the frame might look like a 3D model and the wheels look like 2D circles getting stretched or flattened. It’s kind of awkward, but that’s probably just me getting nit picky.

Mountain Biker does a lot of things pretty well, and I’m always on the lookout for something that attempts to evolve (however slightly) on the Tiny Wings up/down hill mechanics. Unfortunately, despite having an interesting tap-and-tilt control scheme and a fitting theme, the game never fully grabbed me. There are better examples on the App Store of nearly every idea the game throws into the mix, and when put together the final product is sometimes fun, but kind of awkward just as often. I think there’s definitely an audience for it, though, particularly if you enjoy any of the riders or brands featured in the game. For everyone else, there are probably worse things you could throw a few bucks at. Actually, scratch that–it’s free now. So there you go.