Do you ever have a game that just does not click with you? Twofold Inc. ($3.99) is the equivalent of a restaurant where you can admire the work and craftsmanship that went into the product at hand. What you’re given is made with care and skill. But understanding and respecting why something is the way it is doesn’t mean that you have to like it. You can even understand why others may like it. I respect Twofold Inc. but I didn’t have much fun with it. 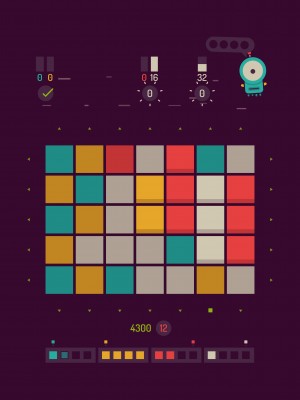 So, to describe Twofold Inc.‘s gameplay is tough. I’ll let Jared describe it in his game of the week post. Watch some gameplay video of it. I will say that the concept is complex and the UI often obscure, but it all comes together to be something that can be intrinsically understood without too much difficulty once you dive in and play the game. Even clever things like the arrows for each row and column changing to show you where a no-further-penalty move reversal are done in a clever way left to you to discover.

The production on Twofold Inc. is slick. The visuals, music, and sound effects all come together quite well. Production values are important for mobile games, and that doesn’t always mean big, splashy visuals: that often just means making smooth animations and making little visual flourishes that make playing the game feel satisfying to the player. Twofold Inc. has that in spades.

I do like that there’s not any kind of extrinsic punishment or anything rushing you beyond the turn system. The move limits on the requests will make you worry about each move, but at least you can think about all the possible implications at your own pace. The UI elements are a bit small, butI never mis-tapped anything, so it’s a lot better than it seems like. While there’s benefit to making big combos, you might want to not always make them because it might leave you with a chaotic board you can’t do much with. There’s smart tradeoffs all over the place, and even breaking up a move might be smart. Even taking advantage of the multiple free moves you get for completing operations is part of the key to success. 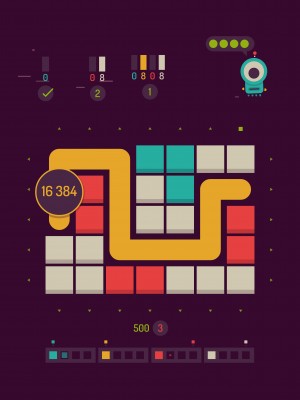 The path-drawing to match blocks feels like an incredibly empty gesture. The game board is small enough that the pathing is never too complicated, and the game tells you if there’s a path available. It would be one thing if there was a punishment for making a wrong path, or if the game didn’t tell you there was a path availble. It feels like either the pathing was a leftover system from a previous iteration of the game. That, or it was supposed to feel like it has the illusion of being something substantial versus just tapping to eliminate colors of blocks. I imagine that there were gameplay design decisions to make you eliminate all contiguous blocks simultaneously, but I’m not a fan of the way that it feels. Making the player break up long strings feels clever on one hand, but it has its drawback of making the player feel like they’re being punished for setting up a long match.

And maybe that’s the problem I have. I can praise this game’s construction and concept all I want, and I feel like I grasp why certain decisions were made. But making the player break up good long strings because they can’t make short ones gets to the heart of the problem. The thing that should feel like a triumph might be you creating your own doom. There’s no grand satisfaction, only a prolonging. This isn’t a game that I had fun with. It doesn’t feel like fun, it feels like a task that you’re doing. You do the task to the best of your ability, and then you go on. Maybe you get a good grade for your performance in the form of a high score, but the satisfaction just isn’t there. Why should I keep playing it?

But here’s the thing: Twofold Inc. is a well-made game. And the way that it structures its challenges might be the perfect thing for you. And I respect that if you had fun with this game. Your opinion is valid. If this game interests you, it might be a bit of a ‘risk’ because it might fall flat or be your new favorite mobile game, as much as $3.99 can be a ‘risk’. But honestly? All I can say is that your reaction to Twofold Inc. is going to depend on you and your tastes. If this sounds like it’s up your alley, I think you should buy it. If it doesn’t excite you, then I’d pass. Maybe that’s not useful advice, but I put the time in, and I see the quality, but I don’t think I’ll be coming back.