As revealed moments ago by Blizzard, Hearthstone (Free) is getting what will amount to the most significant (and inevitable) change to the game ever: Card rotation. Along with that, the game is going to be split into two distinct formats: “Standard" and “Wild" (Think Legacy in the Magic the Gathering world.) and to account for all the decks players are going to be making to play in both formats, the amount of deck slots are getting doubled from nine to eighteen.

If you’re new to collectable card games, the concept of card rotation is likely totally foreign to you. The basic gist of the idea is that as more cards are introduced to the card pool of a collectable card game, a much smaller pool of the “best" cards and decks inevitably emerge. We’ve already been seeing this in Hearthstone with cards like Dr. Boom, a seven drop that’s so good it’s effectively an auto-include in every deck. Similarly, decks like (the now nerfed) Patron Warrior were so powerful, that when The Grand Tournament came out, players didn’t even replace a single card in the deck with anything from the new set. What makes CCG’s so compelling is the constantly evolving meta game, and with only 30 cards in a Hearthstone deck, without card rotation that meta game is in very real danger of freezing up. 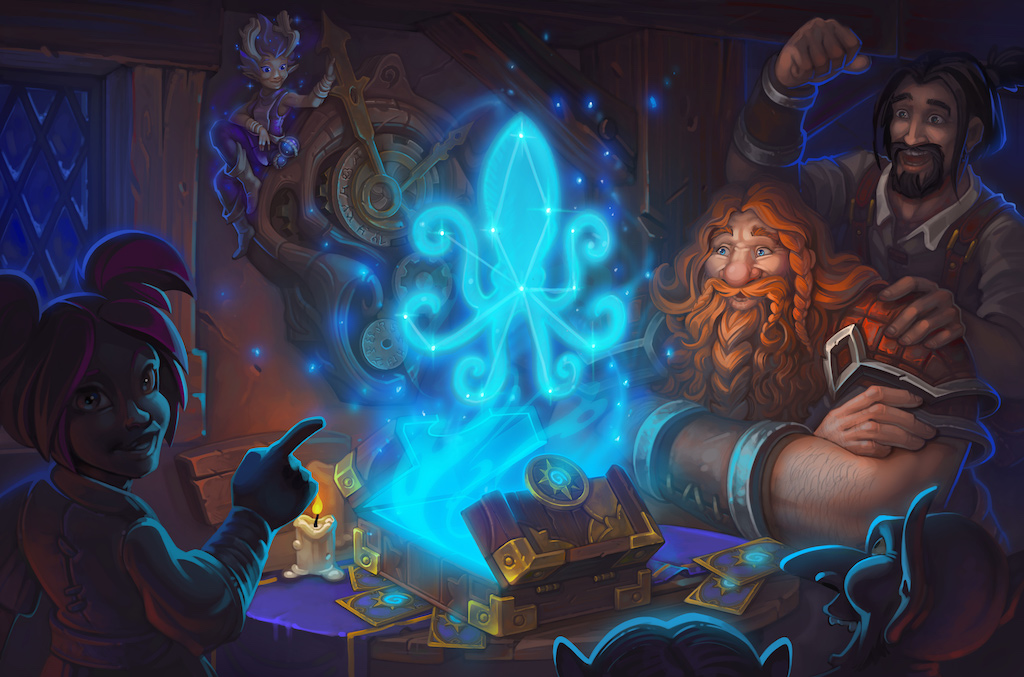 Card rotation comes in to play by having the dominant format of the game (in this case, what they’re calling “Standard") only include the most recent sets of cards, letting older sets “rotate out" as they’re no longer legal for use in Standard decks. The first rotation in Hearthstone will happen when the unannounced Spring 2016 expansion of cards is released, at which point cards from Curse of Naxxramas and Goblins vs Gnomes will fall out of what is allowed in a Standard deck for both normal and ranked play as well as various Hearthstone eSports events. In the next rotation in 2017, Blackrock Mountain, The Grand Tournament, and all the other cards released in 2015 will be sent to Wild and out of Standard.

In this first rotation, powerful decks like Mech Mage and popular cards like Dr. Boom will go away, opening the meta game for entirely new decks and highly preferred cards. For instance, it’s entirely possible that with Naxx and GvG out of the picture, some of the cards that were perceived as “weak" or “underpowered" from The Grand Tournament along with new cards from the Spring 2016 expansion will suddenly play key parts in super powerful strategies that never would’ve evolved into competitive decks otherwise.

For the sake of comparison, in Magic the Gathering, rotations can drastically shift the game around. At its most basic level, rotations have caused slow decks with high cost cards to be viable after, for instance, low-cost particularly punishing cards are no longer able to be played. Sure, it sucks not to be able to play cards and decks you love anymore (I still badly miss the Warren Instigator / Siege Gang Commander goblin deck of Zendikar in Magic.) but it’s really fun to be in that awkward post-rotation period where everyone is scrambling to figure out what’s good again. Some of the most entertaining Magic tournaments to watch are the ones that happen after huge rotations, as people can be playing anything. The same will be true of Hearthstone. 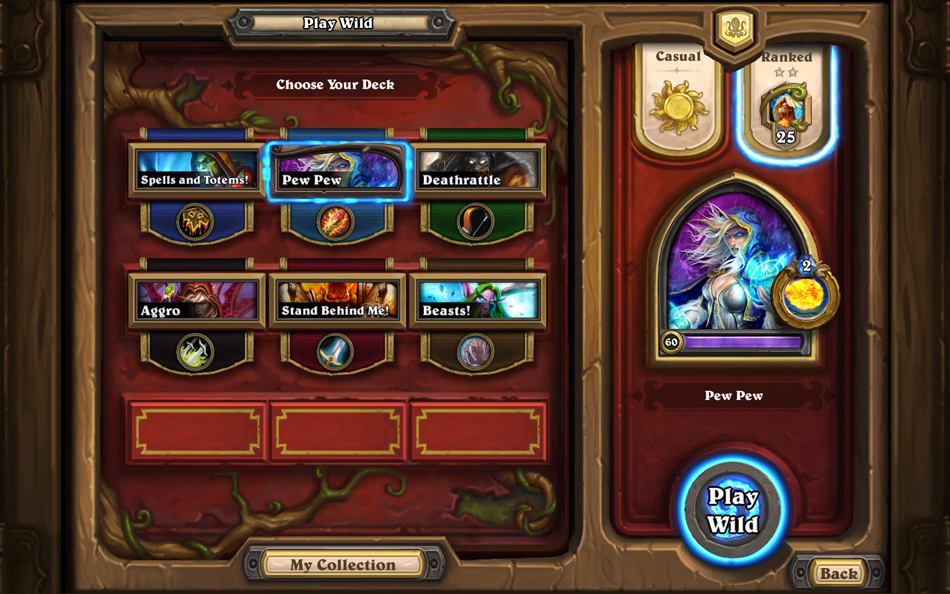 If you just simply can’t get enough of playing with old cards, and the entire card pool, “Wild" is the Hearthstone equivalent to Magic’s Legacy format. Wild will both have casual random matches as well as ranked queues, so if you’re not into the idea of rotation, you can keep playing Hearthstone the way it is right now, and with every card released in the future, forever, just by participating in the Wild format. (This is also why Blizzard won’t be offering full-cost dust refunds as cards rotate.) It likely also won’t take long for Wild (much like Legacy) to show players who aren’t crazy about the idea of set rotation just how important it is. Again looking at the Magic world, when you’re able to play nearly every card in the game you’re left with nothing but ridiculously broken decks and matches which often are decided by who goes first and whether or not they’re lucky enough to draw their combo to kill you on turn one. But, if you’re super hardcore, and have time to do it, you can hit Legend in both Standard and Wild, as well as earn card backs, complete quests, play adventures, and all that jazz in either format.

The monumental benefit card rotation brings to the table is that card designers have the freedom to build new cards without being limited by worrying about how those cards are going to impact the entirety of the card pool. Instead, you just sort of accept that Wild will always be kind of, well, wild, and focus on making the Standard experience as awesome as possible. Additionally, it lowers the barrier of entry to new players who might want to get involved in Hearthstone, but just get intimidated by the massive backlog of things they feel like they might need to buy across all the different card sets and adventures. Also, on the subject of Wild getting too wild, we’ve spoken with Ben Brode and he mentioned that if Wild gets out of control, they’ll make changes to make sure it remains a fun and compelling format.

Not everything is going away though, as Hearthstone is taking an interesting approach to card rotation by making the Basic and Classic sets of cards evergreen, allowing them to always be playable in Standard. This has an awesome side benefit of making sure that even if you put the game down for a year and come back to it, you’ll still always have cards you can use. Comparatively, I haven’t played paper Magic in quite a while now, and if I wanted to play in any Standard Magic event, I’m going to need to buy a lot of cards. It’s also important that Basic and Classic stick around as that’s where a lot of the thematically important class cards live. It would be weird, for instance, to have a Mage deck where you couldn’t run a class-defining spell like Fireball. 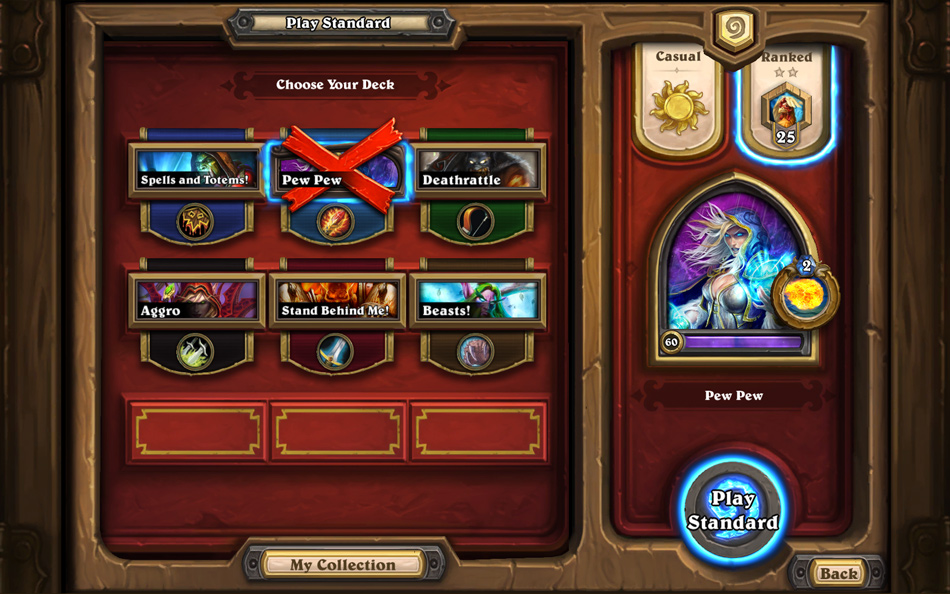 Since these cards are going to be in the game forever, they’re also going to see a balancing pass with that in mind. Blizzard isn’t getting super specific on what’s being changed just yet, but if there ever was a time to make some sweeping changes to a bunch of cards with a long-term focus, this is it. Brode has told us that it will be the largest set of nerfs in the history of Hearthstone, with a favorite example of pointing to some Druid decks that will run upwards of 22 Basic and Classic cards, leaving little room for much else. The goal of all this is to have players wanting to play with all the new cards, and fill in any hole with Basic and Classic cards instead of the other way around.

Some (or all) of this announcement will inevitably upset players, but what may come as a surprise is that Blizzard didn’t come to these conclusions alone. I’m actually sort of shocked that more people didn’t pick up on the fact that back in late September basically every top-tier Hearthstone streamer and a few media outlets (myself included) were all at Blizzard for… Supremely mysterious (Initially, even for us!) reasons that were never revealed. Now that the cat is out of the bag, we’re free to discuss what went down. 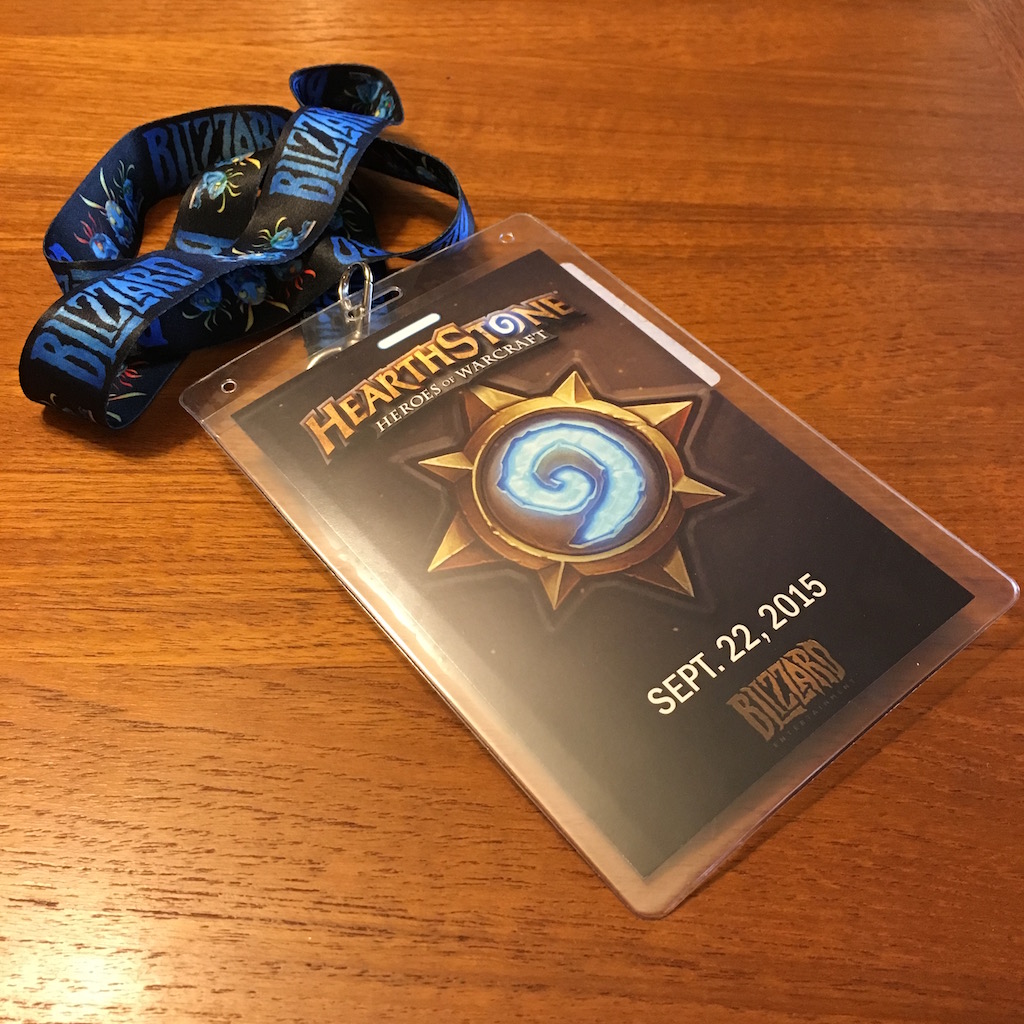 As a life-long Blizzard fan, when they send you an email that effectively says, “Hey can you come here next week, we can’t say why, but sign all these non-disclosure agreements anyway," you just automatically respond, “Well, alright." Few things are more interesting than a trip to visit Blizzard, particularly a trip that is so secretive they can’t even tell you why you should come. We arrived and were given equally mysterious itineraries for the day, including a meeting at 3:15 to go over, and I quote, “Other Stuff." It actually wasn’t until we all signed an entirely new set of non-disclosure agreements that we were led down a hallway into a conference room where they revealed the purpose of the clandestine meeting: To get to know what we thought about their plans for card rotation.

Now, taking a step back here, if you’re a seasoned member of the Battle.net forums or a grizzled warrior from the r/hearthstone trenches, you’re likely no stranger to the common line of reasoning that “Blizzard doesn’t care," “Blizzard isn’t listening," “Blizzard isn’t doing anything," and everything possibly imaginable in between. In working with the Hearthstone team on this, one thing was abundantly clear above everything else: They care, they’re listening, and they’re doing more stuff behind the scenes than you could even imagine.

Even just consider the timeline on this announcement: In September we were given a presentation on their potential plans for card rotation which had undoubtedly been the subject of discussion at Blizzard for months before it was firm enough to present it to us. They got our feedback, and once again went back to the drawing board and it wasn’t until now, in late January, that this was even announced, and it won’t even happen until Spring. Blizzard has never been a company that releases anything before it’s ready, and when you look at the time this took, that philosophy seems to extend to every aspect of Blizzard games. 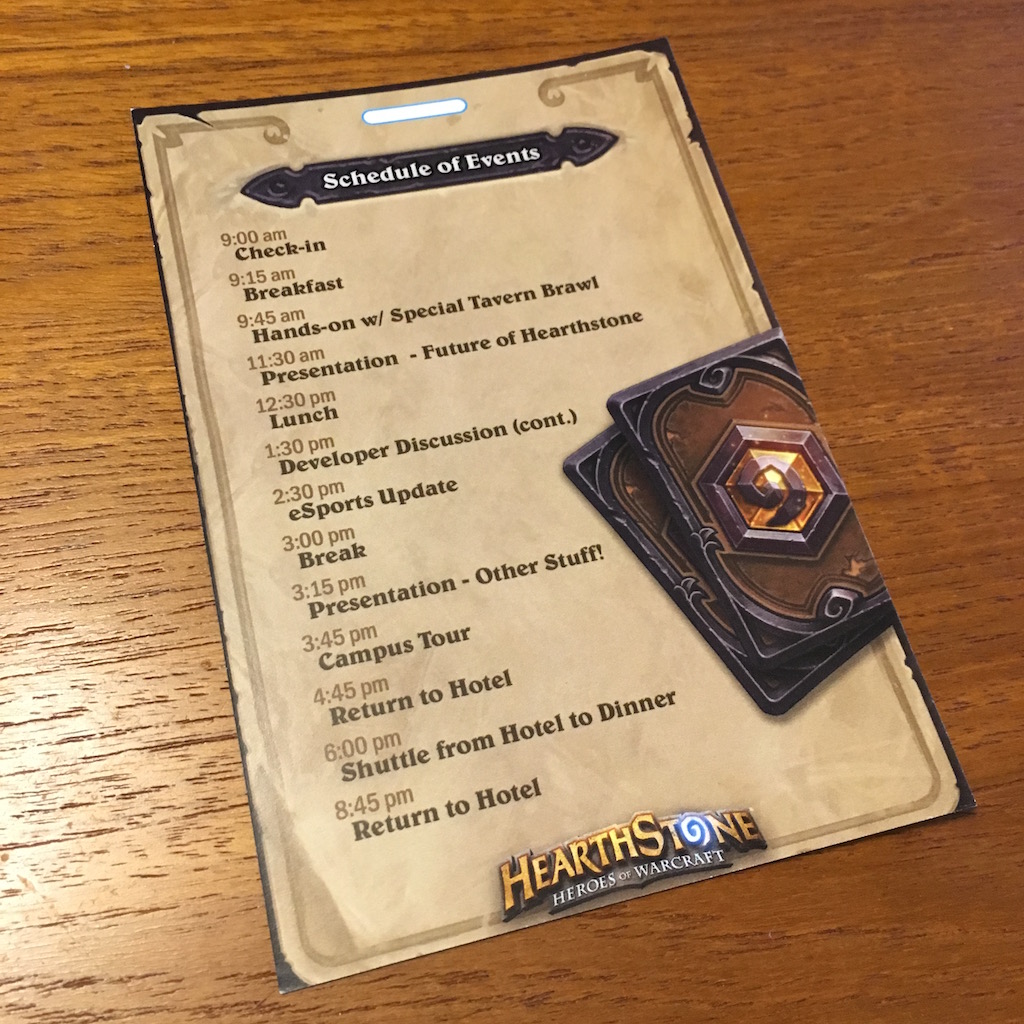 In the end, Blizzard took a very measured, middle of the road approach to how to handle card rotation based on the feedback that was offered. I, along with a few others, were pushing for a far more aggressive take on rotation, suggesting that they move the cards that feel too important to do away with from Classic to Basic, and straight up rotate Classic out sort of like how Magic handles their annual core set. The idea of having a large evergreen card pool for players was very important to Blizzard, and in the long run, their approach is probably for the better as they can devote time on more interesting cards and sets instead of annually re-releasing different variations of Silence, Earth Shock, and other Classic staples to have cards in Standard which fulfill those roles- Sort of like how in Magic there’s always some form of Lighting Bolt equivalent effect even if it isn’t specifically a card titled “Lightning Bolt".

While we were there to let Blizzard pick our brains, the true revelation of the whole event was fully realizing just how much the Hearthstone team cares about everything, and every type of player. The amount of personal ownership everyone I talked to takes in making sure that Hearthstone is as awesome as it can be, and as fun as it can be, for everyone regardless of whether you’re dumping tons of money in the game and playing competitively or just a casual player who does a Tavern Brawl once in a while and never spends a dime, was simply incredible. So, again, while the idea of not being able to play your Naxx or GvG cards might upset you, just know that it was done through careful consideration, tons of feedback, and more discussions than I could even imagine.

With that being said, it’s going to be super nice to never see Sludge Belchers, Annoy-o-Trons, and other cards that see entirely too much play ever again- Unless of course you feel like going wild playing Wild.

For more information on card rotation in Hearthstone and other nitty gritty details, check out the surprisingly elaborate FAQ Blizzard released as well as this video with Ben Brode: