The East New World (Free) is pretty comfortable wearing its inspirations on its sleeve. The enemy designs map pretty closely to those found in Goblin Sword ($1.99). The button layout is very similar to the one used on Sword Of Xolan ($0.99). The basic gameplay of all of these games isn’t that far removed from Devious Dungeon ($2.99). That’s not to say that The East New World doesn’t have a few ideas of its own, but it’s similar enough to Goblin Sword in particular that it feels like a reskin at times. You’ll need to make your way through preset levels, searching out three crystals and two chests per stage, defeating whatever gets in your way using your sword. Pick up all the coins and gems you find on the way so that you can buy new gear in town between levels. Use your trusty double jump to avoid spikes and other hazards, and make your way to the exit somewhere on the far right-hand side of the stage. Very much a clone, to be sure, but it’s at least a good one.

I’d love to tell you the story at this point, but it’s hard to make hash of the game’s, shall we say, creative use of the English language. Something about a bad king and the power of love. I’m not sure. The problem can be solved with your sword, that’s the main thing. As you collect the crystals found in the levels, you’ll get little snippets of story, and you can talk to a character back in town to ostensibly learn a little more here and there. In total, there are 81 stages, with 9 of them being boss encounters. They’re spread fairly evenly across four different worlds, each with their own visual theme and area-specific enemies. The levels are fairly big and the secrets can be extremely hard to find at times, so the game ends up being quite long. It’s also very difficult, more so than any of the other games I’ve mentioned in this review, so be prepared for a challenge. 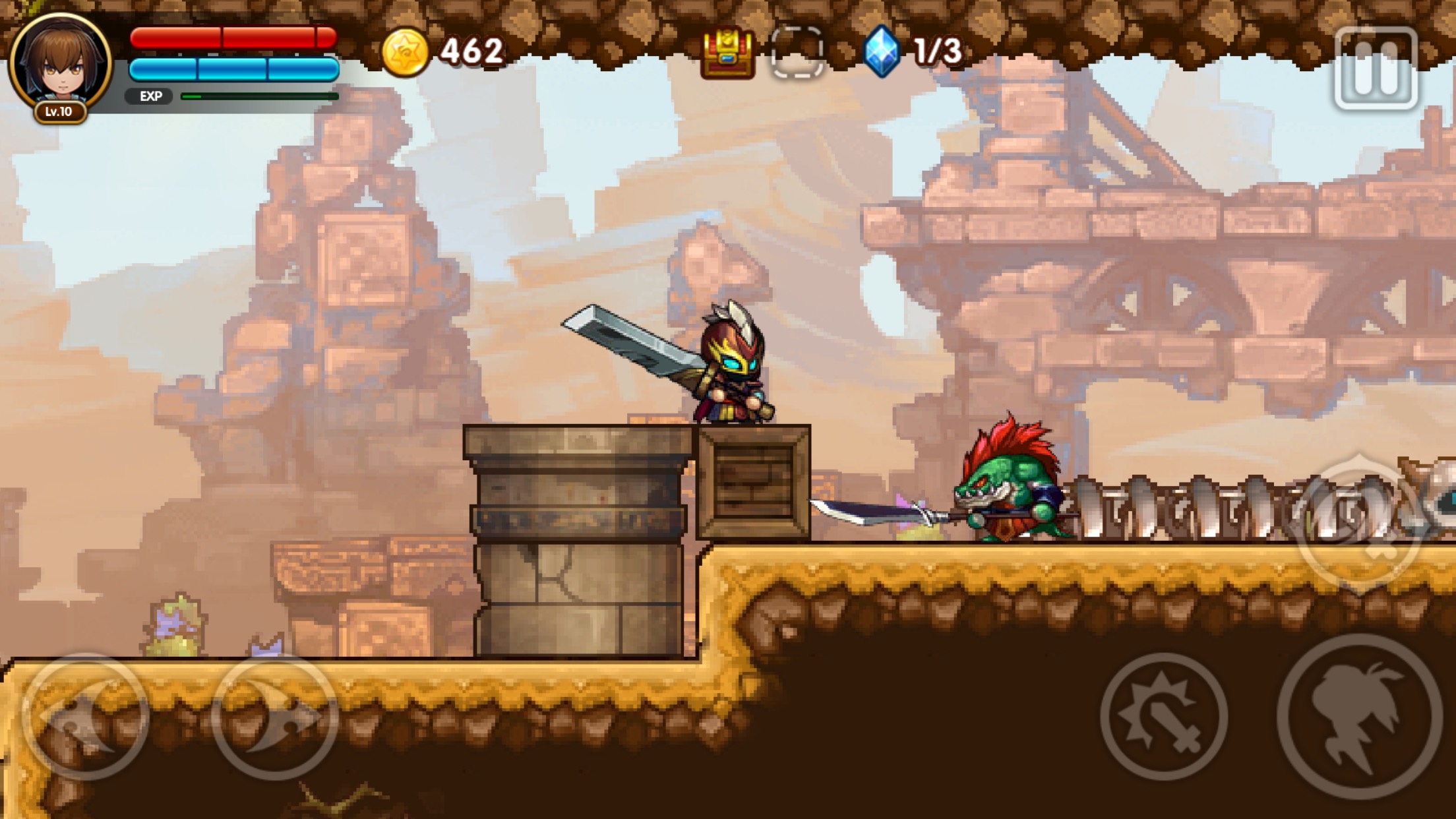 As in those other games, you can buy and equip new gear to improve your stats. There are a lot of other ways to spend your coins, too. In between levels, you can go back to your town, where a number of amenities are available. The blacksmith sells weapons, armor, and trinkets that you can buy to change your appearance or improve your stats. Armor is only cosmetic, though, so don’t waste too many coins until you’ve bought everything else you need. There’s a restaurant where you can buy food that will give you a one-stage buff to your stats, and a magic shop that lets you attach powerful gems to your armor and equip magic to your weapon. There’s a girl who hands out free coins each day after you play for a certain amount of time, and portals leading to the game’s other modes, Boss Rush, Time Attack, and Survival. Plus, you can check out your house and decorate it with the trophies you’ve found on your adventures.

In addition to these various upgrades, your character will gain experience points from killing enemies and eventually level up. When that happens, you can choose one of three stats to boost, and your life and magic meter will be topped off. There are lots of ways to become stronger in The East New World, and you’ll probably need to use all of them. One small mercy is that anything you find in a level and carry to the exit is permanently found, so you don’t need to get everything in a single run. You will want to find as much as you possibly can, though, since many of the upgrades in town require you to find items or recipes to unlock them first. 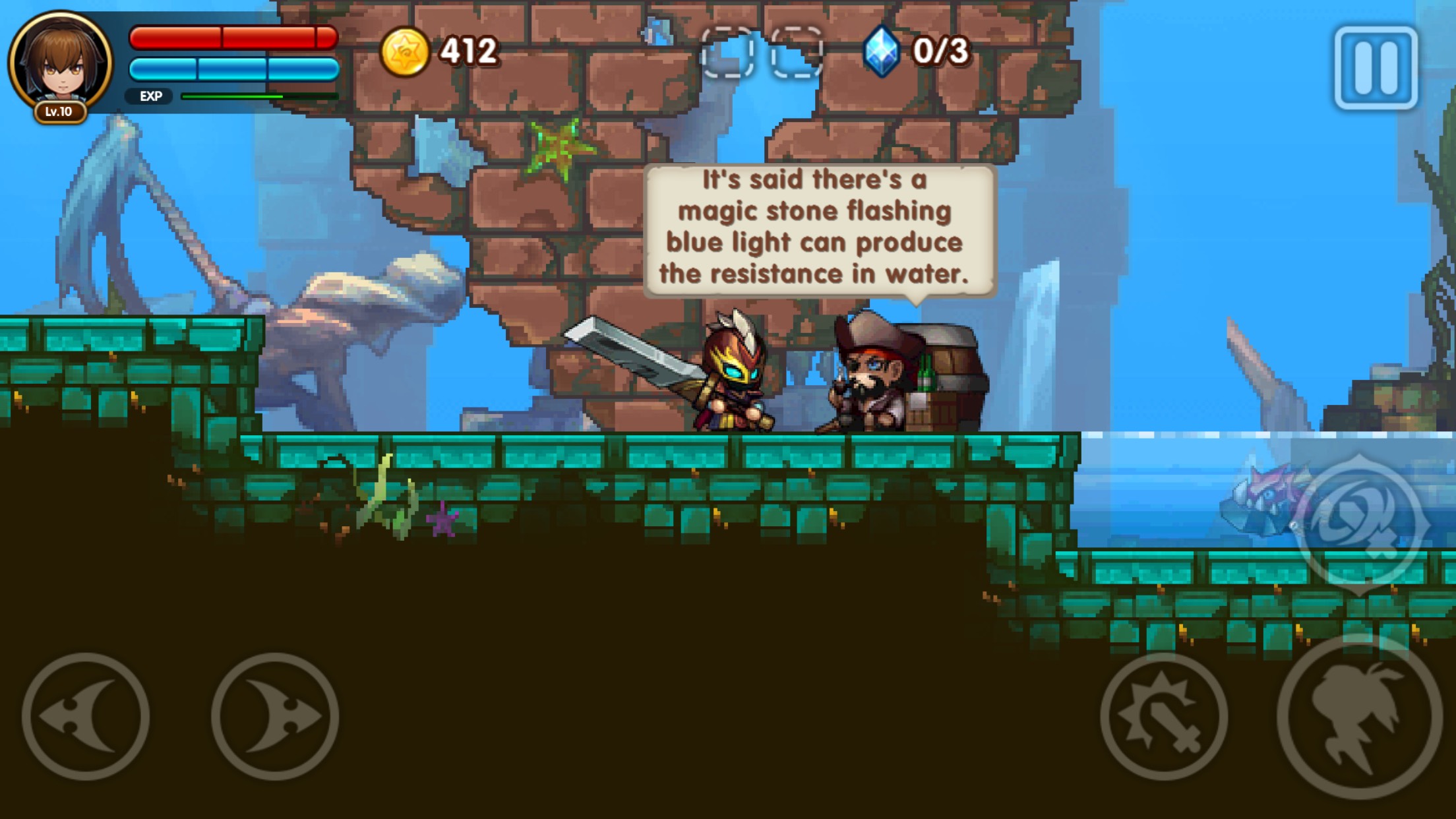 As fun as finding secrets can be, it does get pretty tiresome at times in The East New World. You not only have to rub up against every wall like an overly-affectionate cat, you also need to constantly be swiping down in case you happen to be standing on a floor you can drop through. There’s rarely any indication a secret is lurking around, making it feel random and kind of tedious to find everything. It’s usually easier just to look at the map and try to think of likely locations that could house an extra room, but even that involves a lot of wall-hugging. The game is also quite bad about warning you of danger ahead of time. You might not be able to tell a drop is fatal until you dive in, and the level designs aren’t shy about arranging damaging spikes in ways that are hard to avoid unless you already know where they are.

The game comes off a lot better when you’re fighting. The controls are a touch more precise here than in Goblin Sword, the enemies are placed in more interesting combinations, and the bosses have challenging patterns that keep you on your toes. The hit detection can be unfavorable at times, but your sword has good reach to start with and only gets longer over time, so as long as you’re careful not to let enemies crowd your space, it’s rarely a serious problem. Stay sharp, because your health can go down fairly quickly in close quarters and healing items are rarely handed out. If you fail, your only options are to start the level over again, losing everything you had found in the level save experience points gained, or head back to town to try to make a new strategy. It can be awfully disheartening when you find all of the goodies and then trip over some spikes right near the end. Unfortunately, there’s no MFi controller support in the game yet, but the developer is apparently adding it soon. 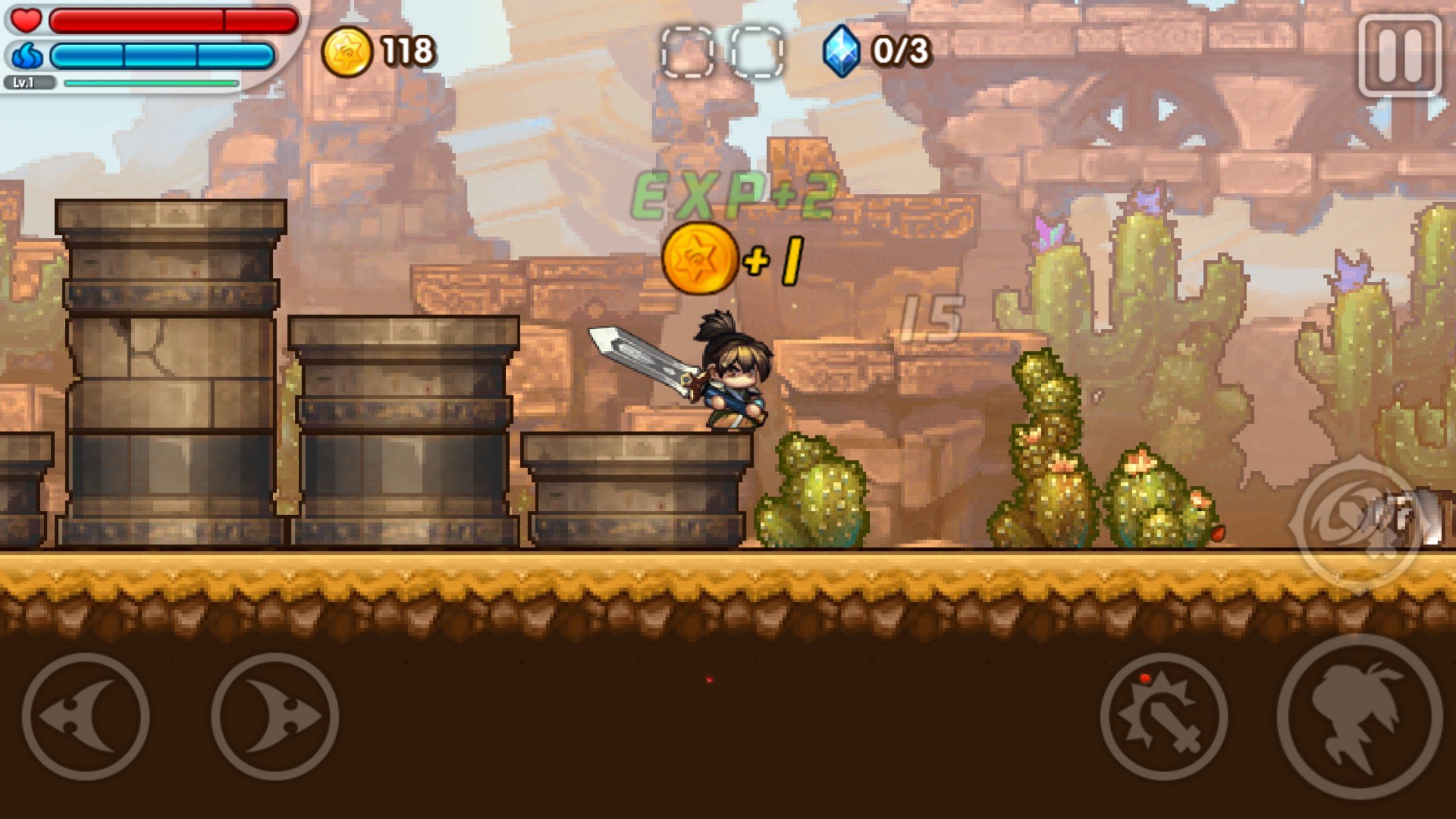 The action in The East New World is solid and you certainly get a lot of game for your money. There are no IAPs, so the initial purchase price covers you for the whole game. While it gets more than a little repetitive over the long haul and can be exceptionally frustrating at times, if you enjoyed any of the games The East New World draws inspiration from, you’ll likely have a fine time here, too. It can be pretty shameless at times in how closely it hews to those games, but it has just enough character of its own to get away with it.