You don’t have to look far to find an iOS game about digging. It’s an oddly specific activity to have so many games to its name, but whatever the reasons, people seem to enjoy it. Most games of this type encourage the player to take their time and be cautious, which makes sense given the inherent dangers involved. Games with more an arcade bent to them will counter this need for caution with some sort of immediate danger that keeps the player moving. The challenge then becomes moving fast enough to avoid danger while somehow trying not to make any fatal mistakes in spite of your pace. Pick-Xell (Free), the latest release from Japanese publisher Obokaidem, distills that idea down to its very essence.

In this game, you play as a digging robot who has to accomplish various tasks in order to clear each stage. There are only two lanes to dig in, and you can move between them by tapping the left and right sides of the screen. As you dig, you’ll come across special cells that contain various items. Gems are good, and can be used to upgrade your stats or buy new gear. Stars fill up a meter that lets you use a special super move. Iron blocks you from digging, while skulls will end your run. You’ll want to be particularly careful around those. Just to keep things interesting, however, your robot runs on battery power. Whether you’re moving or not, the battery is constantly draining, and if it goes empty, that’s the end of your current dig. You can refill it by collecting batteries from special cells, but the main way to keep yourself healthy is to keep digging. Every cell you dig will add a little to your battery power, and if you dig fast enough, your power will hardly drop at all. 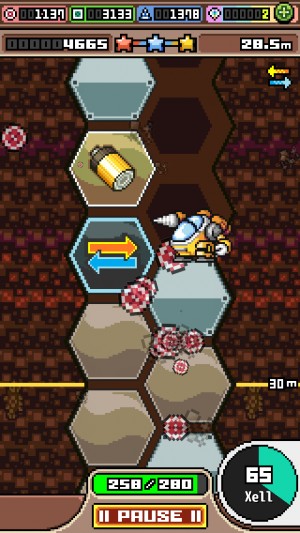 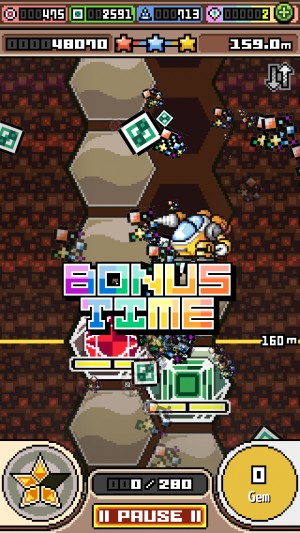 So basically, you need to tap left and right as quickly as you can to keep your energy up, ideally picking up beneficial cells but certainly avoiding the skulls. If you hit a skull or run out of battery power, you can continue once by watching a video ad, or as many times as you’d like by shelling out an increasingly ludicrous amount of the game’s premium currency. Ideally, though, you’ll want to avoid having to continue at all. This is tricky enough to handle, but as you get deeper into the game, it introduces new gimmicks to try to mess with you. For example, there are chests that can hide a gem or a skull, and arrows that reverse the orientation of the screen vertically or horizontally. Each new set of levels adds a new trick you have to learn, one it will quickly incorporate with everything else you’ve seen so far. If you take your time, none of it is that bad, but time is a luxury you don’t have.

Besides the 100 or so stages with set goals, Pick-Xell also includes an endless mode. It’s unlocked after playing the first set of regular stages, which you can do in a matter of minutes. You can dig away here without many worries, as unlike the regular mode, you won’t lose collected gems when you die in endless. Were it not for the limitless continues via premium currency, I could see this mode making for some fun leaderboard competition. Unfortunately, as people can buy their way to the top if they have the cash to burn, it’s mostly enjoyable as a competition against yourself and a way to collect some needed gems. You can even score some of the premium currency by playing in endless mode. It’s also the best place to unlock many of the game’s secret characters, each of which comes with their own stats and appearance. 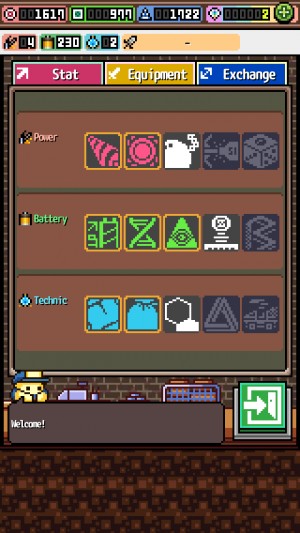 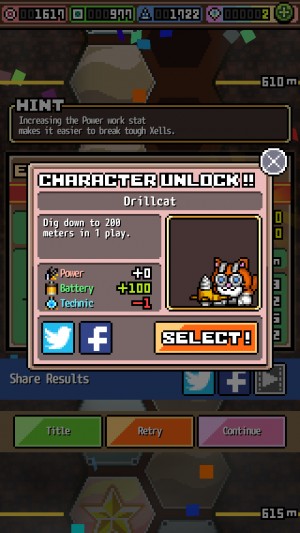 The regular gems come in three different types and can be exchanged at the shop for items and universal stat boosts. Some of the items are equipment, while others are one-time use. Broadly speaking, each of the gem types and what they buy correspond to one of the three stats. Rubies are used to increase power, making it easier to dig through tough blocks. Emeralds will increase your battery power, allowing you to last longer on each run. Sapphires increase your skill, which acts as a multiplier for your score and collected gems. You can also exchange one type of gem for another, albeit at a nasty exchange rate. The first few stat upgrades in each category are relatively cheap, but the last few spike up heavily, likely to encourage buying the premium currency.

Apart from the premium currency and incentivized ads, you’ll get the occasional banner ad pop up after playing a round. That’s basically it for the game’s monetization, as you can play offline and there are no timers or anything like that. Aside from those later stat boosts, the game feels tuned around playing for free. If anything, the stages with set goals sometimes feel a little too easy, particularly when the game is holding your hand through teaching you whatever the latest gimmick is about. I wish those unlimited continues for premium currency users weren’t there, however. They keep the endless mode from reaching its true potential from a gameplay perspective.

I suppose that continue system isn’t that strange, though. Pick-Xell feels, in a lot of ways, like something that fell out of the early arcade era of Japanese game development. It has a lot of visual character, the mechanics are simple, precise, and challenging, and the game design is intuitive enough to grasp without much in the way of overt instruction. To say nothing of the adorably awkward English translation, which although almost certainly unintentional, helps build Pick-Xell‘s vintage vibe. It’s more like one of those oddities you stumble across buried in a collection of classics than a headliner on the front of the box, but Pick-Xell‘s enjoyable enough to be worth playing with for a little while.