I’ve learned a few things from MetaHuman Inc. ($5.99), the latest interactive fiction release from Choice Of Games. First, with a little creativity, the ChoiceScript engine that powers these games can be more mechanically versatile than I thought it was capable of being. Next, I’m a terrible CEO. Just plain awful. Finally, I don’t especially like being a CEO, and that ended up being a problem for me because being a CEO is more or less what MetaHuman Inc. is all about. At the start of the game, you are appointed the job of running MetaHuman Inc., a shady company that produces human enhancements through a variety of means legal or otherwise. The job starts in January, and you’ll see it through to the end of the calendar year, at which point you’ll face a final evaluation by the majority shareholders. If you fail to impress them, your death is certain.

MetaHuman Inc. is written by Paul Gresty, who previously created The ORPHEUS Ruse ($3.99). The stories take place in the same world, but apart from a minor link, there’s no direct connections you need to worry about. No, all you need to worry about is surviving your first year on the job, a balancing act that will require you to guide your struggling company back into good health and good graces, solve a few mysteries, and maybe even save the planet. While a lot of that can be handled in the usual gamebook manner, a large part of it comes down to the monthly meetings where you decide how to allocate the company’s resources. You only have so much money to go around, and there are lots of ways to spend it, including investments, product research, PR, and so on. As an added kicker, any products you develop can be used by your character, which might help you out during the regular choice-based events that happen outside the meeting room. 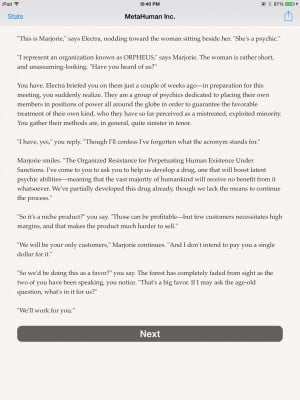 There are a lot of ways you can run the company, but not all of them are successful ways. On top of that, almost everything you do during the events between the monthly meetings will come back to you in some way or another. Whatever route you plan to take, make sure you commit to it fully, because you’ll be eaten alive if you’re too wishy-washy. In any case, everything in MetaHuman Inc. always comes back around to the company. Even the major sub-plot of the game ultimately serves as a reflection of your job performance. With the structure built around the monthly meetings, there’s a measured pace to the game that isn’t found in many gamebooks. It’s a bit odd knowing exactly when the ending is coming soon after you start the story, and the things that happen between meetings tend to feel like episodes of minor importance. Maybe that’s how it really feels to be a CEO. I certainly wouldn’t know.

I do know that at least for me, being chained to the proverbial desk wasn’t a lot of fun. While I appreciate the extra layer of strategy involved in MetaHuman Inc., I also found it to be a stressful experience from start to finish. It’s very difficult to do well, and the people around you aren’t shy about letting you know when you’re messing up. It’s hard to find anyone to trust among the game’s cast of characters, even your romance options, and nobody is particularly likable. After taking so many lickings in the first half of the story, I found myself becoming disinterested in the rest of it because I knew there was little chance of pulling my nose up in time for the end of the year. The writing didn’t manage to compensate well enough for this malaise, so I ended up scanning text instead of truly absorbing it. Once I figured out better strategies, my replay was more enjoyable, but it’s tough to shake the bad feelings from that first playthrough.

As a story, I found MetaHuman Inc. to be interesting but not particularly engaging. There’s a good mystery running through all of the events, but this is one of those gamebooks where the plot seems to be serving the mechanics rather than the opposite. Its mix of science fiction, light horror, and boardroom drama is certainly unique, I’ll give it that. It’s weird that a premise like that comes off as clinical as MetaHuman Inc. does. You don’t get much input on the direction of the overall plot, with your performance determining which of the game’s endings you get, with little variation up to that point.

You do have a fair bit of control over what kind of person your protagonist is, at least, allowing you to be a goodie-two-shoes who probably won’t get along well with the shareholders or a complete jerk who may or may not get along well with the shareholders, with a few extra shades in between. As usual for a Choice Of Games release, you can choose your gender and sexual orientation. The romance elements aren’t very strong in this game, however. You’re married to your job, after all.

The unusual mechanics make MetaHuman Inc. interesting from a gameplay point of view, but overall, I found this to be one of the weaker recent releases from Choice Of Games. There are a few right ways to play it, but it’s hard to find them on an initial playthrough, and the text and plot aren’t strong enough to hold up their side of things while the gameplay elements sort themselves out. If you’re looking to try something a little different and you like the idea of running a company, you might find MetaHuman Inc. to be worth your time, but I can’t say I’m interested in re-upping my contract.