Fantastic Plastic Squad (Free) is a game that punched me in the stomach. I’ve rarely felt so excited and then so disappointed in such a short amount of time. Maybe that’s not fair, but let’s start with the good part: The game has one of the strongest first five minutes of any game I’ve played on iOS. It introduces you to these awesome ’80s action figures that walk around in a hilariously stiff way (they are plastic, as the game’s name suggests), and you get to use them to shoot aliens around a giant house! I absolutely love games that take place in ordinary places seen from a miniature perspective–probably because of playing with action figures as a child–and this game nails that feeling. The controls are smart and tight, and I could feel myself getting super pumped while playing through the tutorial. I could tell this would be a game I’d be playing for a long time. But I was wrong. 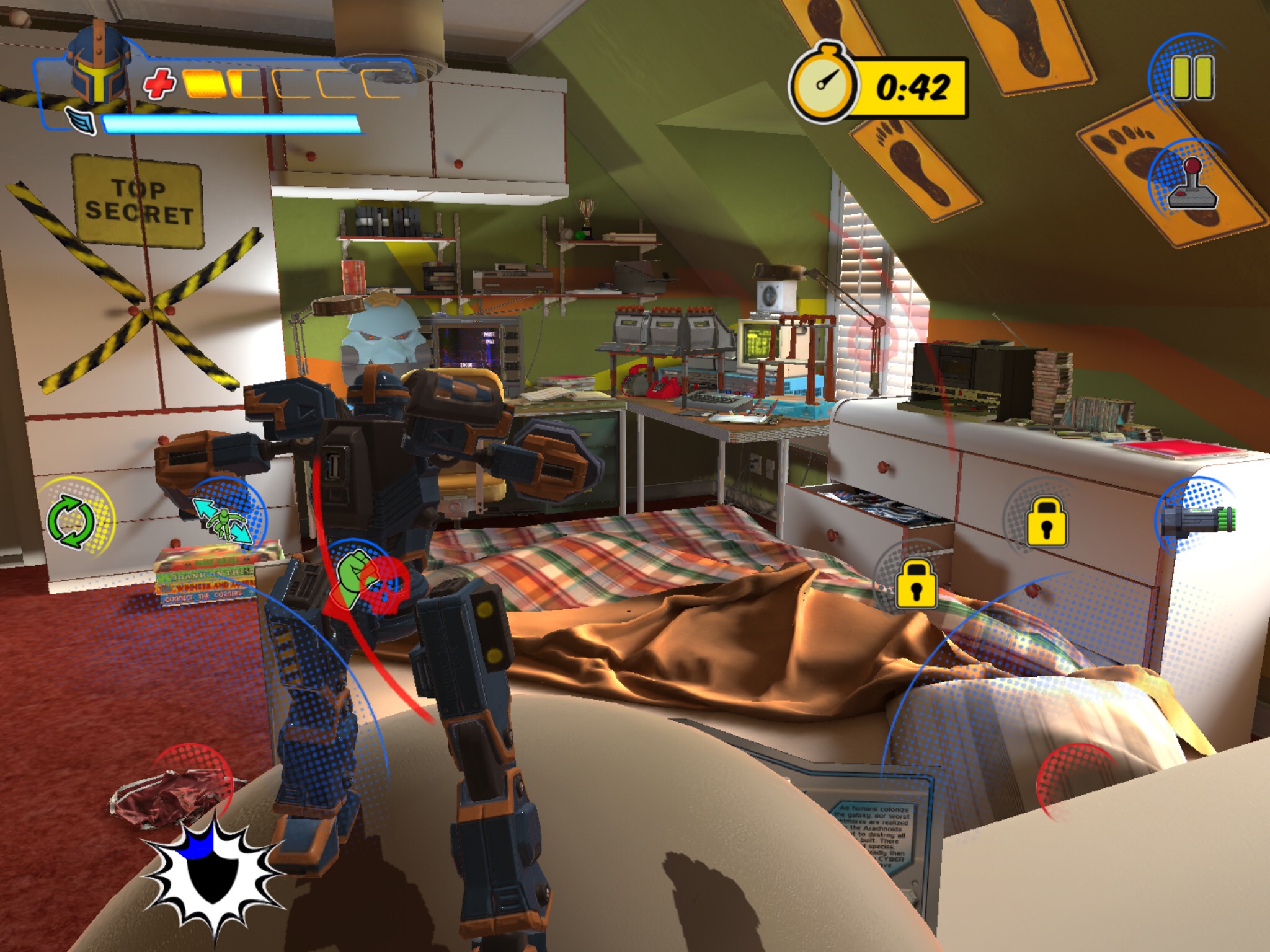 What happened? Your first guess is probably the free-to-play model, right? That’s not it, believe it or not. It’s pretty much the same model as MARVEL Contest of Champions (Free) or any of the other thousand games on the App Store where you collect and combine and upgrade randomly drawn characters. It’s not ideal, of course, but I’m so used to it that I don’t mind it. There are several currencies and timers and all that junk, so if you have an allergic reaction to that stuff than you should probably steer clear anyway.

So it’s not the pay model. Is it the controls? Those can easily make or break a game. But no, as I said earlier, the controls are fine. The game is played in a third-person perspective with typical first/third-person touch controls. There’s a movement stick on the left and you’re free to swipe anywhere on the right to aim. The game auto-fires when an enemy is in the crosshairs, which is something I appreciate on touch screen devices. You can also swipe to perform evasive moves like rolling. Everything works really well, though it was a bit too sensitive for my liking at first. You can change it in the menu, which I did, and it’s great. 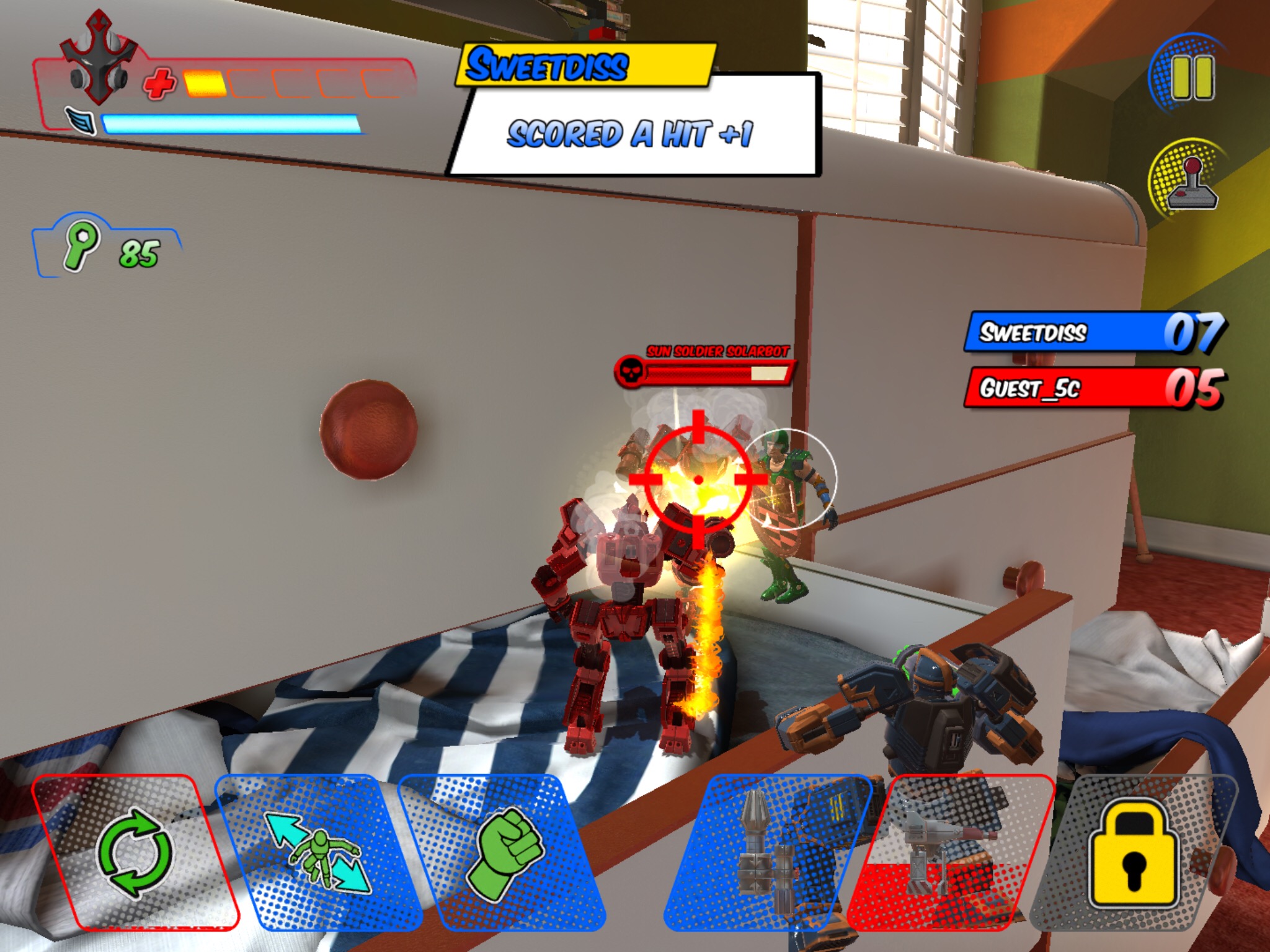 What’s wrong, then? Is the game just not fun? No, it’s actually quite fun. As I mentioned in the first paragraph, I love toy-based games like Micro Machines and all that junk. It can feel really satisfying shooting down aliens while leaping from an open drawer to a messy bed, for example. The levels are designed well and the shooting mechanics are solid. Everything feels great.

It must look like garbage, then. Is that it? Nope. It looks amazing, with tons of detailed characters that look and move like toys would and lots of bright, fun colors everywhere. There’s a cool sort of 80’s comic book theme to all the menus and the in-game graphics run really smoothly on my iPad Air. Everything is fluid and sharp.

This whole “asking myself a question and then answering it” thing is starting to feel annoying and gimmicky, so I’m just going come right out with it now: Fantastic Plastic Squad has an auto-play system, and it nearly ruins the game for me. It’s called “commander mode”, and when you trigger it, the game takes control of your character and does all the running and gunning while you can push a couple buttons to reload and roll out of the way, if you want. This might sound perfect for a mobile free-to-play game with lots of grinding, but it really does suck all the fun out. 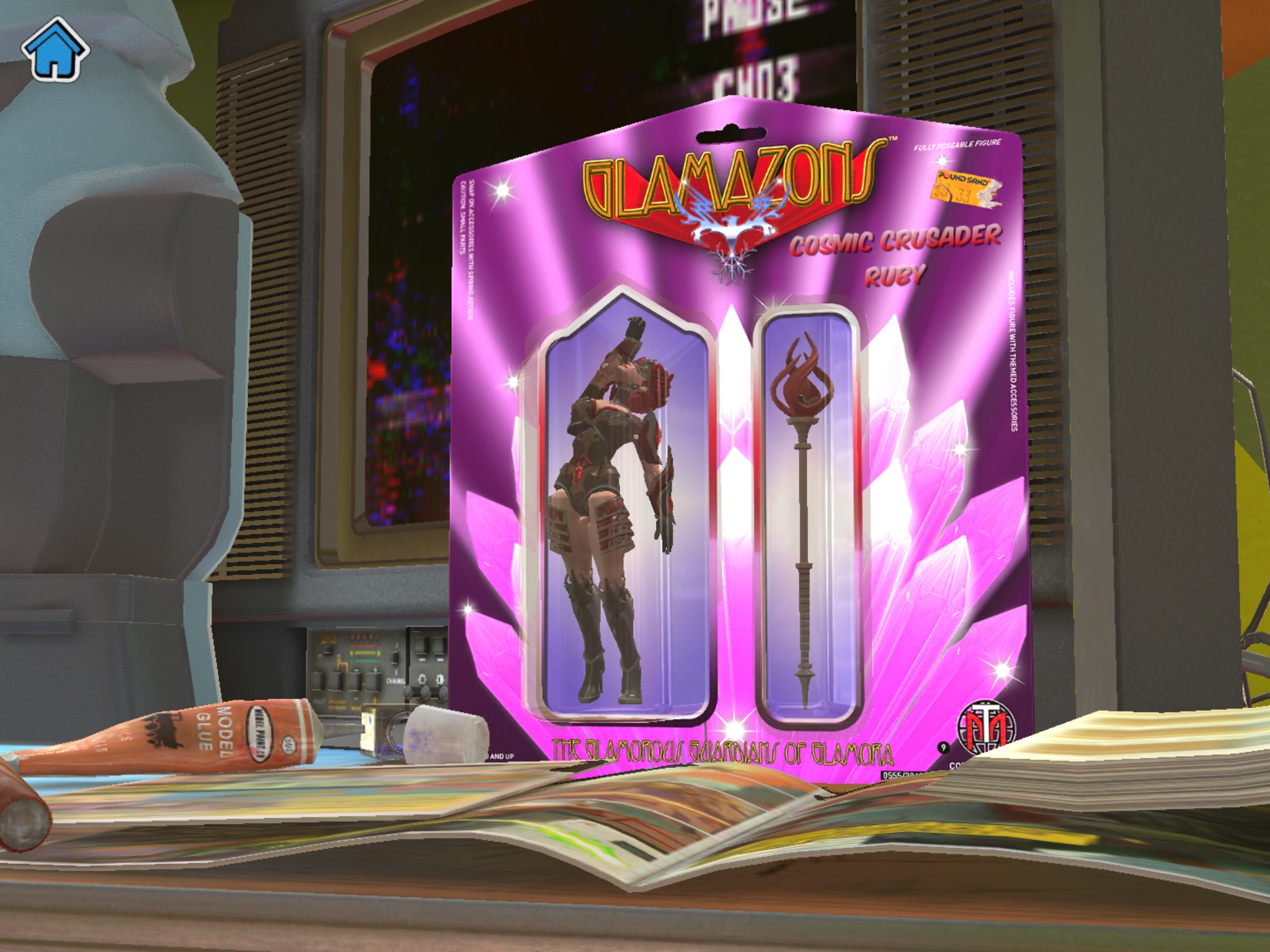 I know, I know. I can just choose not to use it. And I do. But just the mere fact that it’s there somehow makes everything I’m doing feel pointless. Why control the character myself when the AI aims perfectly and always knows where to go? It’s like you’re in a pie baking competition, and under the counter there’s a bunch of perfect pies already made, and anyone can grab one and get a perfect score. Why do any work, then? Even if the baking is fun, you’re choosing to do it yourself and you know you’ll end up with a worse pie when you’re done.

Other games include auto-play to help ease the repetition of grinding, of course, like Need For Speed: No Limits (Free) and Taichi Panda (Free). The difference is that those games require a human to be behind the wheel initially and only let you put it on autopilot for grinding. It’s a great idea for free-to-play games like this, but it almost breaks the game when they take that requirement away. I keep trying to think of other ways to describe the way it feels to play Fantastic Plastic Squad knowing commander mode is there, but “pointless” pretty much sums it up.

I feel the need now to express that these reviews are essentially just opinions, and your experience with Fantastic Plastic Squad might be totally different than mine. (Indeed, people in our forums seem quite taken with the game.) Maybe you don’t mind using auto-play for the entire game, or maybe you’re able to enjoy playing “manual” even with commander mode there. Personally, I can’t bring myself to do either of those things. If I’m going to let a game play itself I’d rather it be a simple clicker or something, and I just can’t enjoy playing the game myself when I know I can easily hand the controls over to an AI that will do everything better.

All that being said, literally everything else about the game is incredible, and despite being quite hard on it in this review, I think it’s still worth checking out to see if it clicks with you. The production values, the characters, the environments, the controls (if you use them)–it’s all basically perfect. Those first five minutes were really amazing.