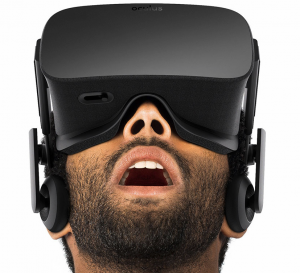 We’ve been posting about the Oculus Rift forever now, as in the early days of the VR headset there were a lot of rumblings that it’d work with next-gen smartphones. That kinda sorta came true in a tangential way with Samsung’s Gear VR which is a VR headset that you pop your Samsung smartphone into. I’ve tried it, it’s cool. Anyway, I figured even though the Oculus Rift has taken the hardcore PC gamer fork in the road away from mobile, it still seemed worthwhile to post that the headset is now available to preorder just to complete the cycle of covering the product.

So, yeah, if you’ve been following along with the rise of virtual reality in recent years, today is a pretty exciting day as the Oculus Rift is now available for preorder. It’ll set you back a cool $599.00 plus whatever getting your gaming PC (or buying a gaming PC if you don’t have one) is going to cost you. If you head over to the Oculus shop you can both preorder the headset and download a program that’ll tell you if your Windows PC meets the minimum requirements to play Rift games. I know there’s inevitably going to be a lot of poo-pooing on the price here (Hell, Twitter is already in full-poop mode) but a recent tweet from the founder of Oculus VR seems pretty relevant right now:

Bleeding edge, early adopter technology is always expensive. The cool part is, all the people gobbling these up at $599 are likely going to create a really awesome platform for the rest of us to dive into in a couple years when there’s tons of neat stuff to do inside the Rift, for way less money. Remember, the original iPhone launched at $599, and despite reactions like these:

…We all obviously see how that panned out. What I’m personally excited for is for one of the developers racing to preorder today to figure out the killer app that’s going to elevate VR from a fun 15 minute demo to something that everyone needs. If this all has you curious about what modern VR is like, it’s worth dropping $17 on Google Cardboard. It’ll use your existing iPhone and give you a good idea of what all the fuss is about.

To reiterate, we are not making money on Rift hardware. High end VR is expensive, but Rift is obscenely cheap for what it is.