Hello, gentle readers, and welcome to the RPG Reload, the weekly feature where we never forget to pack torches. Each week, we take a look at an RPG from the App Store’s past to see how it holds up in the here and now. It’s a chance to revisit old favorites, reflect on their place in the overall library, or just to take a deeper dive than our reviews typically allow for. As the boss of this dungeon, I try to set a balanced schedule of games from week to week, but if you feel like I’m missing something important, let me know. You can do that by leaving a comment below, posting in the Official RPG Reload Club thread, or by tweeting me at @RPGReload. I plan the schedule really far in advance, so you might not see your suggestion soon, but it will be added to the master list. 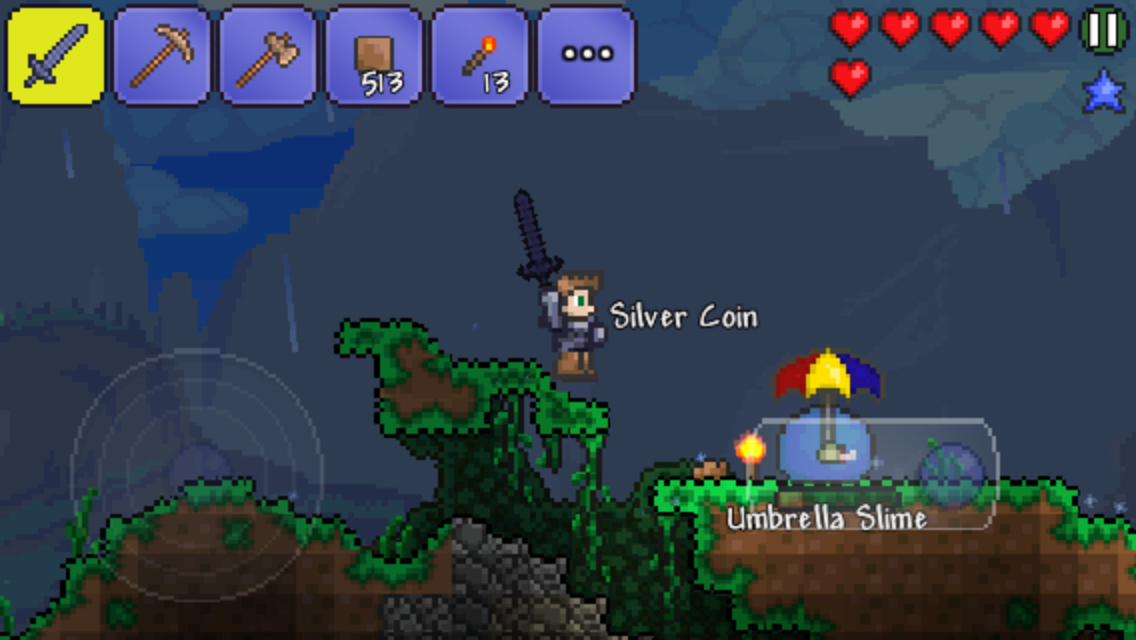 As we wind down to the end of the year, there are only a couple of regular RPG Reloads left in 2015. We’ll be doing two Special Editions again this year, one for Christmas and one for the New Year, so I hope you’ll enjoy those. This week, we’re going to be looking at Terraria ($4.99), from Re-Logic and 505 Games. To be honest, this is one of those games that I’d remembered as being more of an RPG than it actually is, but we might as well roll with it at this point. At its core, Terraria is one of the many crafting games that followed in the wake of Minecraft ($6.99) ‘s phenomenal success. In fact, it’s probably the most popular one outside of Minecraft itself. The game is available on several platforms, and has sold over 12 million copies in total.

After Minecraft started looking like the biggest thing since sliced bread, it was only natural that similar games would follow. I dare say it was also natural that some of them would adopt a 2D side-view perspective in contrast to Minecraft‘s 3D first-person view. I’m not sure if Terraria was the first, but it was at least the first well-known game to hit the market with that particular spin. Its initial release was for Windows PCs in May of 2011, several months ahead of the mobile release of Junk Jack ($0.99), another popular 2D crafting game. Almost two years later, in March of 2013, it made its way to the PlayStation 3 and Xbox 360 consoles, with a mobile release on iOS and Android coming in the late summer of the same year. It’s since been released on just about every possible modern platform save the Nintendo Wii U, but it’s even been announced for that system. In short, Terraria is ubiquitous in a way that almost no other crafting game that followed Minecraft has been able to achieve. 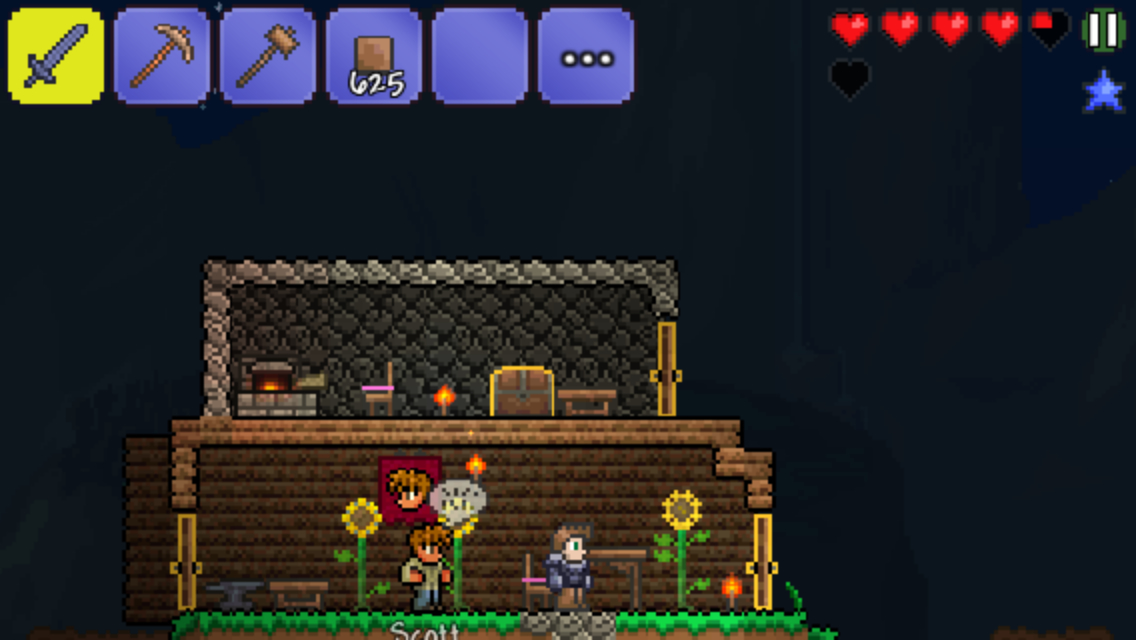 I think the reason the game has been so successful is because it doesn’t simply follow in the footsteps of Minecraft. You’re doing plenty of crafting, mining, and building, but instead of simply offering a sand box where you have to set your own goals, Terraria plugs in more traditional video game elements. There are bosses to fight, permanent health meter upgrades to discover, NPCs to talk to and interact with, and so on. You can still play it as a purely open-ended game if that’s your thing, but those who want some kind of linear march to an ultimate goal will find Terraria to be most accommodating. The blend of modern open-world and crafting elements with traditional action-adventure gameplay makes for a unique and enjoyable experience that feels meaningfully different from Minecraft.

Counting the composer, Terraria was originally the work of just four people. Since then, Indiana-based developer Re-Logic, headed by Andrew “Redigit" Spinks, has grown considerably. In addition to updating Terraria, they’re also working on a spin-off, Terraria: Otherworld, and apparently a sequel, Terraria 2. The mobile and console versions of the game are handled by different developers, which accounts for the differences between the various versions. The mobile port is overseen by Codeglue, a Dutch game developer founded in the year 2000. It has a fair few items not found in the PC version, but sacrifices quite a few things in the transition, with the most noticeable cuts being the smaller size of the worlds generated, and the lack of online multiplayer. 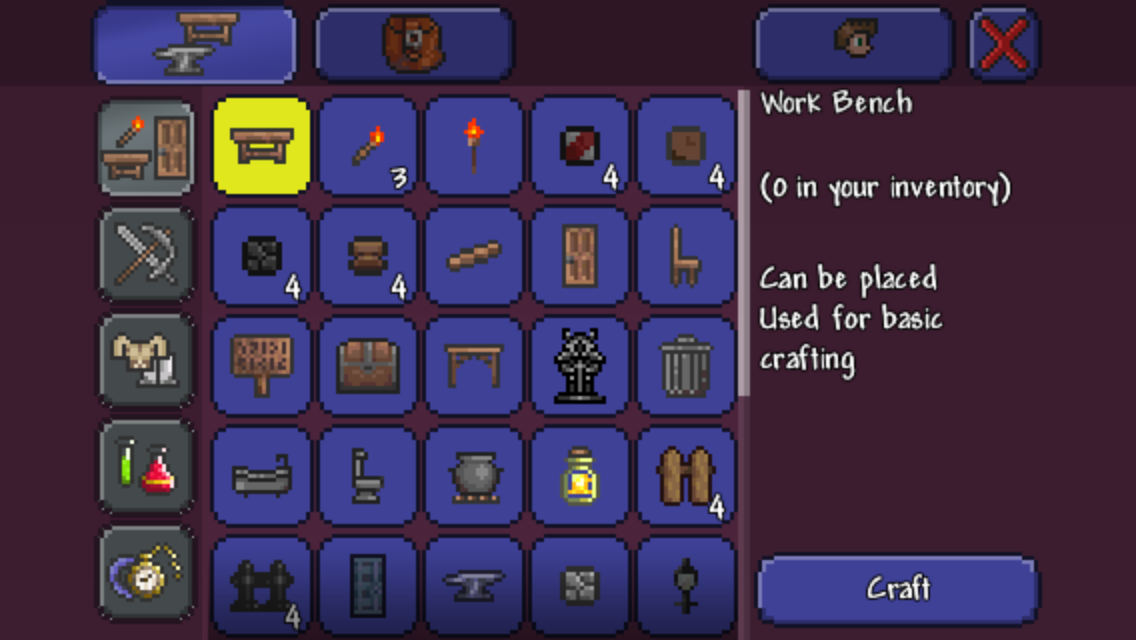 Granted, the mobile version is in a lot better shape than it was at launch. Back then, it didn’t even have local multiplayer, and the game’s difficulty was made far too easy. Regular updates have mostly brought the game up to snuff, with the latest update arriving on the very same day I’m writing this. Not many paid, IAP-free games can afford to maintain an update schedule like Terraria‘s, and it’s especially rare when it comes to RPG-style games. Even with a couple of years behind it, the iOS version of this game is still active and popular. I’d say that’s mostly on the strength of the original game’s design, but it certainly doesn’t hurt that Codeglue keeps on top of important holiday events and seasons.

The biggest issue plaguing the iOS version of Terraria, in my opinion, are the controls. They’re awkward, a little confusing at times, and a real pain in the hindquarters in tense situations. I’m not sure what a better way would look like, though. They give you two ways to target objects with your tools. You can either move your right thumb like it’s on a stick, which will cause you to target the nearest block in the direction you’re pointing, or you can press and hold, which brings up a magnified view that allows you to easily target specific blocks. There are negatives to both, with the former lacking precision and the latter leaving you highly vulnerable to enemy attack. You can side-step this problem if you have an MFi controller, at least, but I imagine the vast majority are just doing their best with the touch controls. 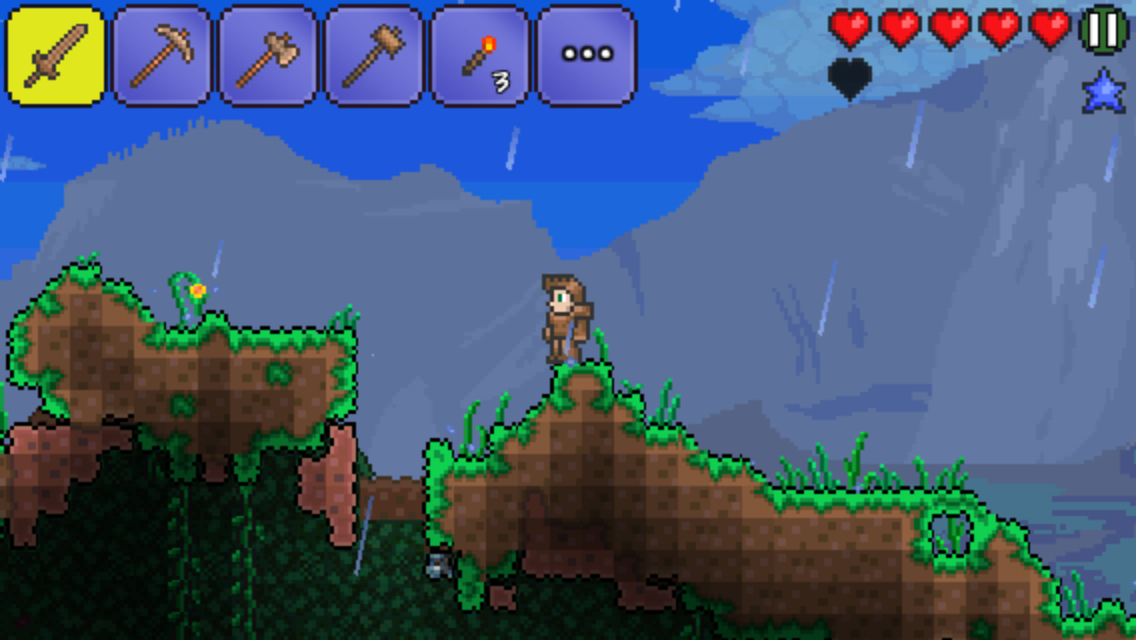 Once you get the swing of the controls, the iOS version of Terraria is a fun game. I think as a pure crafting game it’s not as good as Junk Jack X ($4.99) or Minecraft, but because of its nature as a hybrid, it has something of its own to offer. It’s not the best crafting game, it’s not the best action-adventure game, and it’s certainly not the best RPG, but in amalgamating those genres, Terraria walks a path of its own. It doesn’t go in halfway on any of those elements, either. The crafting system is quite robust and complex, the adventure elements make excellent use of secrets and mysteries to tease the player’s curiosity, and the progression of your character’s equipment, health, and growing village echo with some of the greats of the RPG genre. I believe that’s why it has had such great success. It casts a wide net, and banks on at least one part of the experience pulling you in long enough for you to fall in love with the rest.

That’s all I’ve got to say about Terraria, which I guess makes this one of the shorter RPG Reloads in a while. It’s a neat game, and its open-ended side makes it a game as much about making your own stories as it is about stumbling across the main threads. The app has been well-maintained over the years and I fully expect that to remain the case for the foreseeable future, which certainly makes it a safe investment compared to some of the older games I’ve written about here previously. At the same time, I can’t help but feel that Terraria‘s strongest quality is in its crafting, and in that regard, it’s got some awfully stiff competition on mobile. That leaves the game making an appeal to an audience that might not have ever before been interested in the primary game mechanics Terraria leans on. It’s an interesting case. 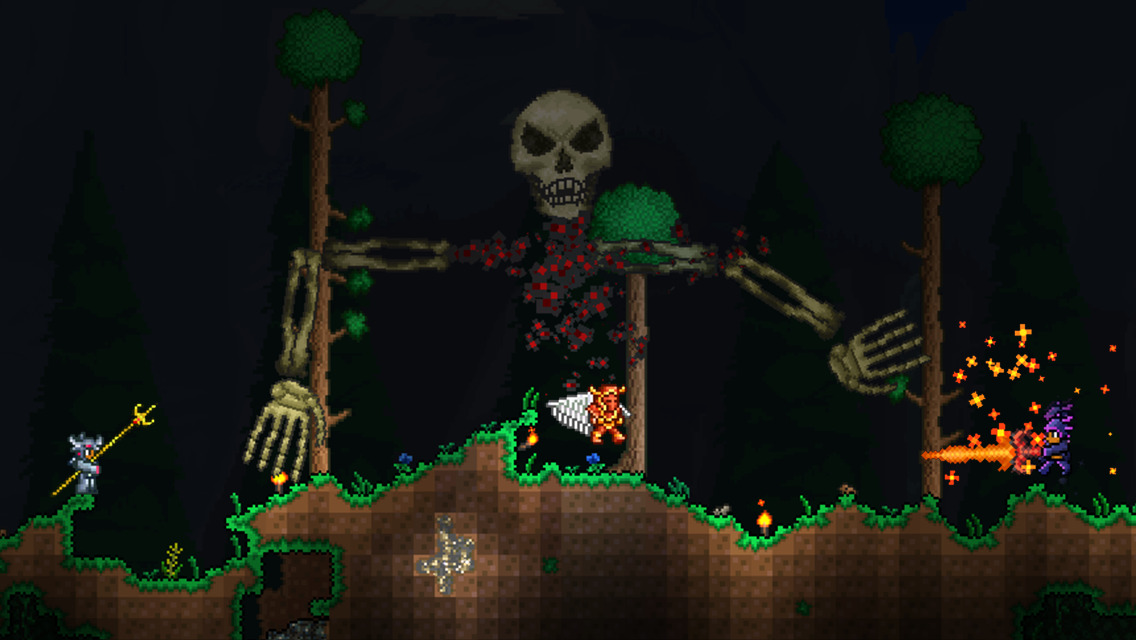 Those are just my thoughts on Terraria, however. What do you all think? I want to know, so let me know by commenting below, posting in the Official RPG Reload Club thread, or by tweeting me at @RPGReload. In case you’re wondering what happened to the RPG Reload Podcast this month, all I can tell you is that after recording it, we were wandering around on Floor B26 of TouchArcade Towers looking for the lost bones of ex-writers when we ran into a deadly Ragelope. In the process of making a swift escape from the cunning beast, we lost the USB stick that held about 75% of the recording. Alas, we’re going to have to do a second take on that one, but we want to give it a little time so that we can have a fresh-feeling conversation again. Sorry for the delay, friends. As for me, I’ll be back next week with our last featured game of 2015, King Cashing (Free). Thanks for reading!