If you recall around San Diego Comic-Con time, there was an announcement of a Futurama game coming to mobile, but we didn’t really know much in the way of details or anything quite yet when it was announced, but a few more details have just rolled out. We know the title: Futurama: Game of Drones. Wooga is oging to publish the game, with their lineup of free-to-play games, so if you were hoping this would be a paid game, well, it’s looking unlikely. Hate to break it to you, it is 2015. 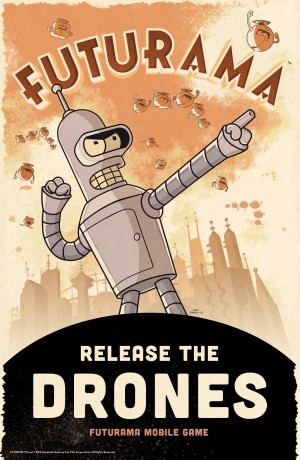 Three acclaimed writers are going to come up with the storyline for the game:

As far as the gameplay goes, you’ll be assembling an army of delivery drones to deliver dangerous cargo to far-off places, trying to top MomCo’s efforts. You’ll probably fail, because Mom is unstoppable, but hey – the fun will be in trying. No word on any release date quite yet.