Another day, another Warhammer game. But Pixel Toys’ Warhammer 40,000: Freeblade (Free) seemed promising not just because Apple showed it off with 3D Touch, but also because it’s a game where you walk around as a giant Imperial Knight and shoot everything in sight with big, explosive weapons and a giant chainsword. What’s not to love with that combination? Well, the issue is that this game plays everything big – and that includes the monetization, which tries every trick in the book to get you to pay. This isn’t bad, except for a misleading energy system that really sours the experience. And like many free-to-play games, including the social RPGs it apes much of its structure from, it quickly becomes something where if you tire of the cycle the game puts you on, you will fall out of it quickly. The gameplay is brutal fun, but it alone is not enough to keep you going. 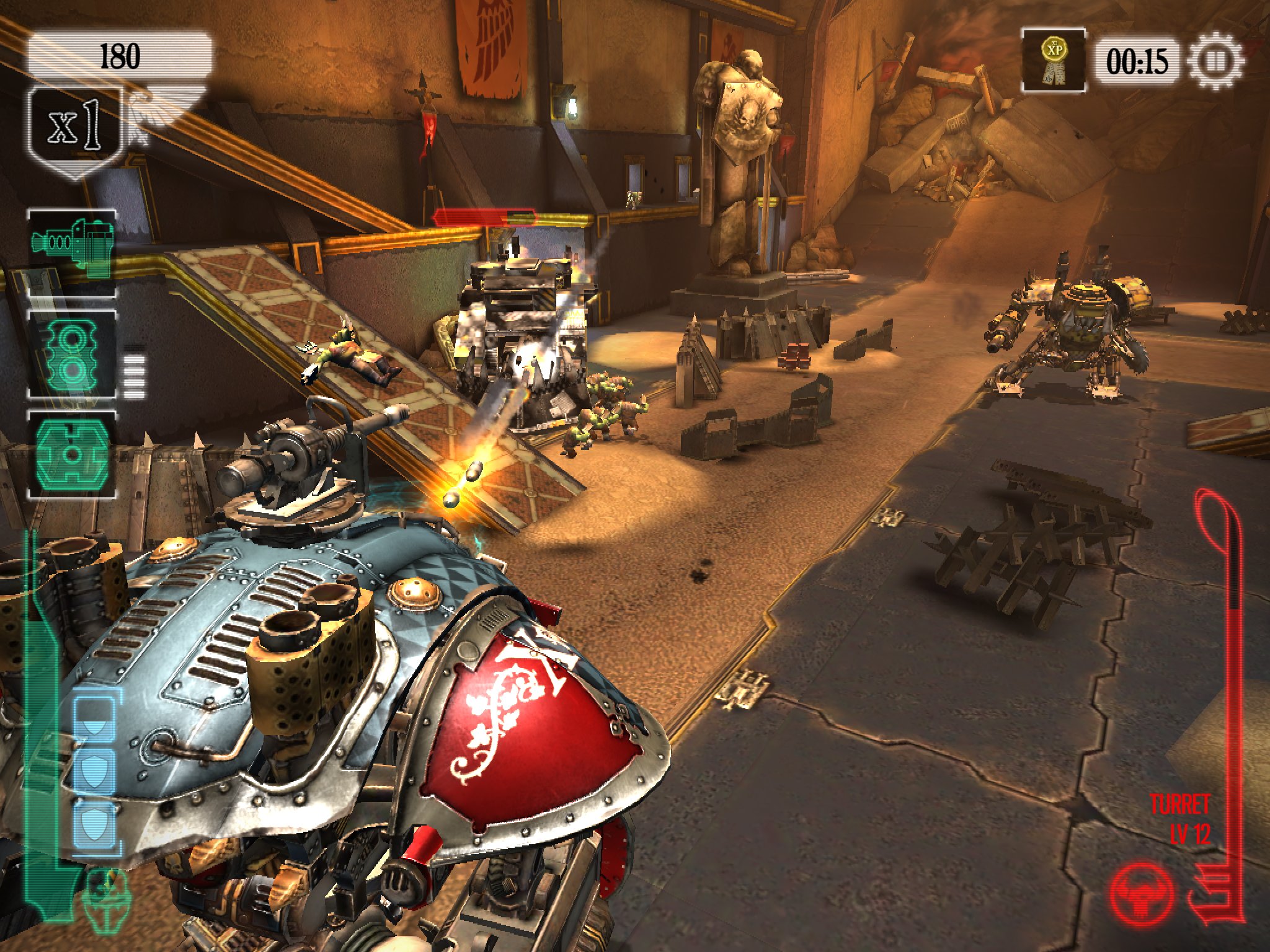 If I may, I need to say how much I enjoy the ridiculous nature of the Warhammer universe. It’s so over-the-top grim and dystopian, with a self-seriousness in its scenario and dialogue that I find just so charming. It’s unironic excessive violence in its world. And the dialogue is written without trying to subvert the ridiculousness of the world. If you want to take it seriously and think it’s awesome, the game doesn’t push back. If you want to enjoy it for the comic nature of just how unceasing it is with its fantasy dystopia, and the dialogue that is perhaps some of the most overwrought in the history of language, well, it provides plenty of material for you to ironically enjoy.

As for me, I named my Freeblade Shinypoines. Seemed only appropriate. 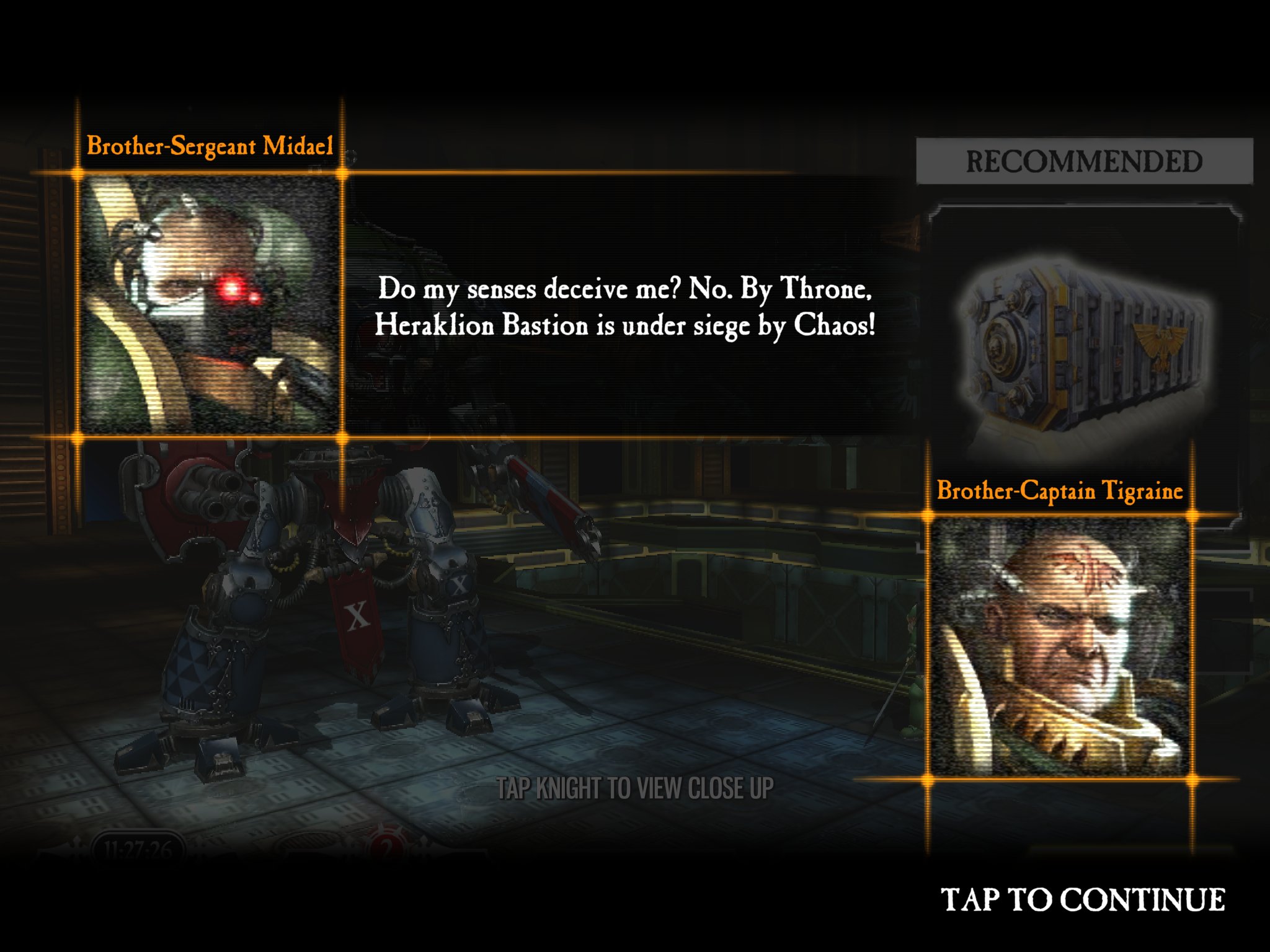 The game uses 3D Touch, and while I don’t have the iPhone 6S necessary to use it, I could see where it would be handy. You have three weapons to use, a rapid-fire weapon you tap and hold to use, a missile-type weapon you use two fingers to fire, and a special weapon that you double-tap to use. With 3D Touch, varying levels of pressure will fire different weapons. The game works well enough as it is with these controls, but it’s not hard to see where having the ability to quickly go from your machine guns to missiles without having to go multitouch would be handy. Double-tapping can be a bit unwieldy in the heat of battle, if you accidentally wind up firing a weapon when you didn’t mean to, and you will. Still, the game does a good job at working well on the touchscreen, which one would hope because it’s an on-rails shooter and all you have to do is aim and fire.

Freeblade excels in the field of visual performance, boasting gorgeous graphics that are incredibly detailed. Your Imperial Knight and their gigantic opponents are detailed and decked out from head to toe. Some of the backgrounds are a bit sparse in some levels, but hey – when you’ve got all this party up front, the business in the back can suffer a bit. Regardless, the game looks absolutely fantastic. And the fact that you can deck out and customize your character as you see fit is a great addition, too. 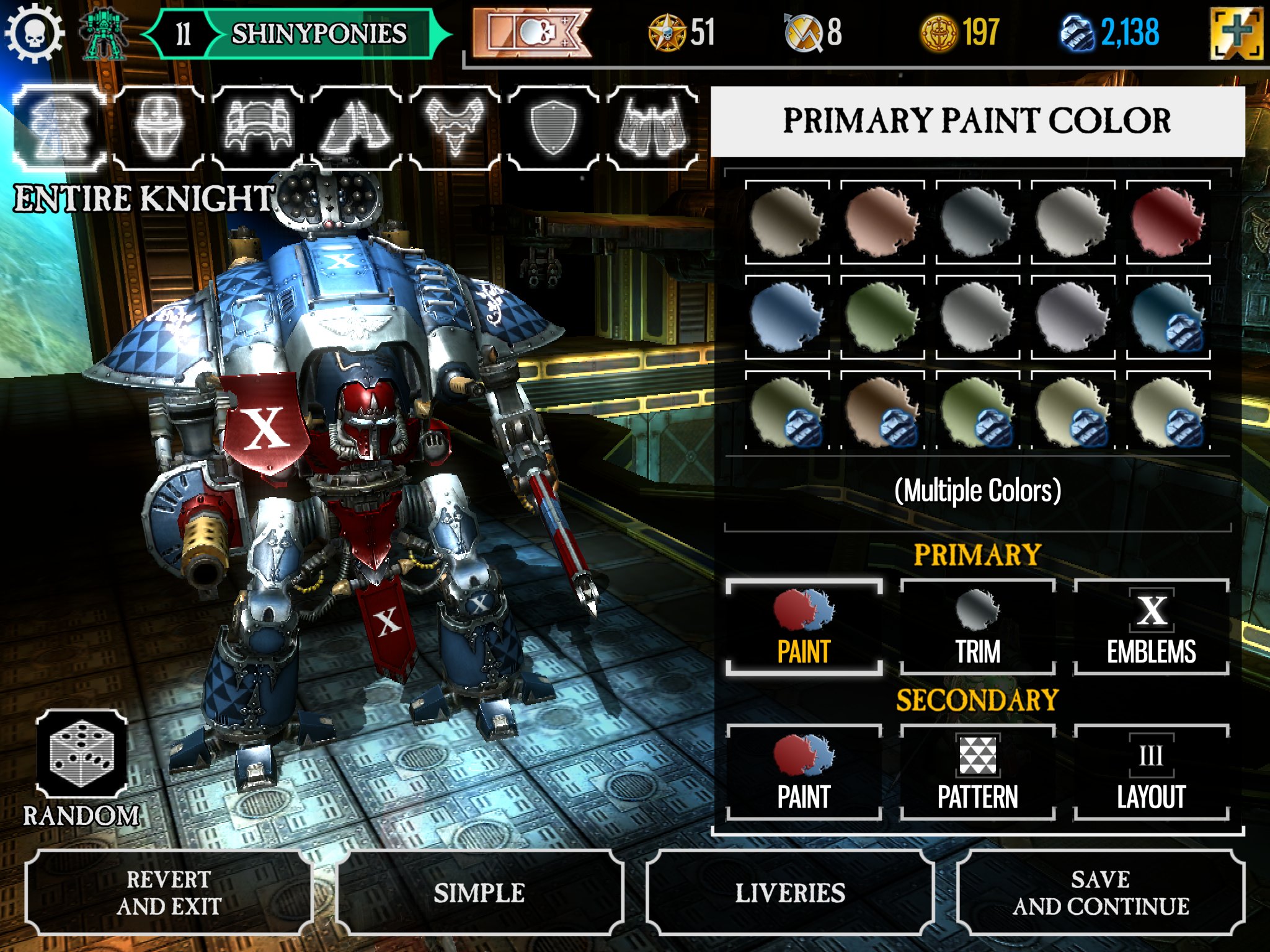 In terms of structure, you’re going through short, 2-3 minute missions, trying to blast enemies. Success requires having sufficient power to go through missions – much like many free-to-play RPGs, you have an overall power, and the game will notify you if an item is deficient. In fact, the entire metagame is very much like a social RPG, with different item types, crafting, and loot to get. It’s just that the action is all on-rails shooter, where you have to balance out your three weapon types to survive, deploying shields as necessary, and engaging in a simple timing-based hand-to-hand combat mode.

The game’s combat is fun to play around with, because you are a giant walking robot blasting tiny orks and giant creatures, and the game doesn’t mess around with any slow moments. And while the whole weapon-balance aspect to the game is fairly simple, it’s a tried-and-true formula. And it requires you to really be smart and balance out how you’re assaulting the enemy forces. Plus, the missions are short enough that the game is perfect for pick-up-and-play sessions. You can feel like you’re getting something done in a quick moment.

In terms of progression, you have eight worlds to make it through with several levels each. However, these levels need to be replayed again and again to complete their alternate missions and to get 3 stars on each, not just for the ore and loot gains (necessary for crafting better items), but because you’ll hit progress gates where you need a certain number of stars and a certain number of patrol missions completed. Patrol missions are just random levels that give you additional loot for completing them. At least this all means that if you hit a wall in terms of game progression, you’ve got plenty of things to do beyond just trying to valiantly push forward, though you will be doing a lot of grinding, I suppose! 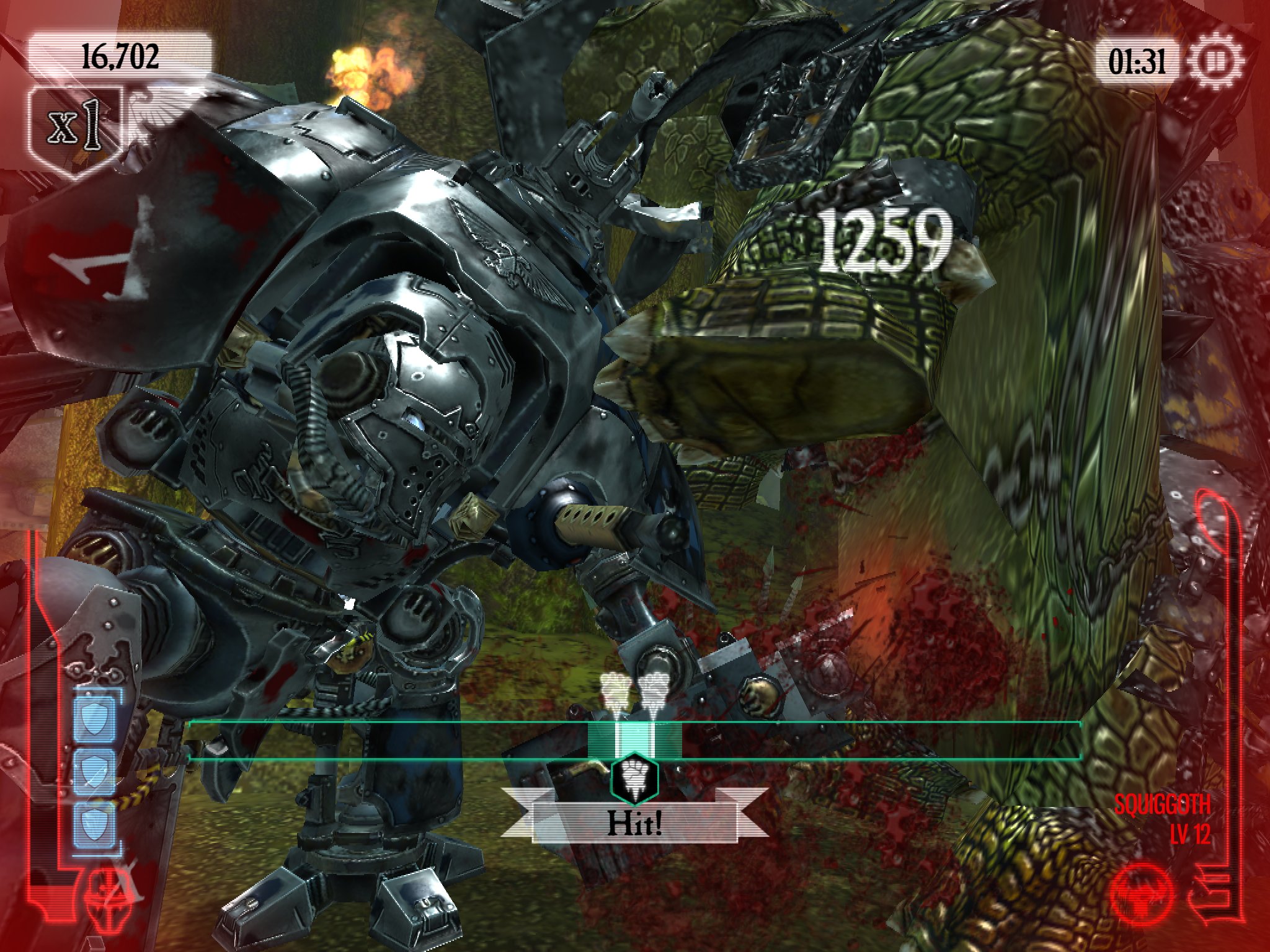 Now, Warhammer 40,000: Freeblade is a free-to-play game, and its monetization strategy seems to be “let’s throw literally every monetization trick in the book at the game." Soft and hard currency are here. There’s different supply drops for getting random items that can be bought with gold, the hard currency. There’s a loyalty bonus, similar to the VIP system in many social RPGs, where spending money on IAP will net you better in-game rewards, such as additional forging slots and XP boosts. You can watch video ads to get more boost items, to get more money, to repair your Freeblade’s energy, and get more Patrol missions. Seriously, pretty much every monetization tactic I’ve seen in free-to-play games is here.

And to be honest, I’m fine with it. This is 2015 – paid games are a risk. And Freeblade ain’t so bad. The frequent video ad opportunities come in handy. A $2.99 gold package purchase will go a long way toward getting you quicker forged items, and energy boosts when necessary. And the game does throw some solid IAP packages your way to give you a discount on normal prices. Freeblade‘s monetization is there and it is persistent, but it’s a game you can enjoy for a while without throwing too much money into the well. 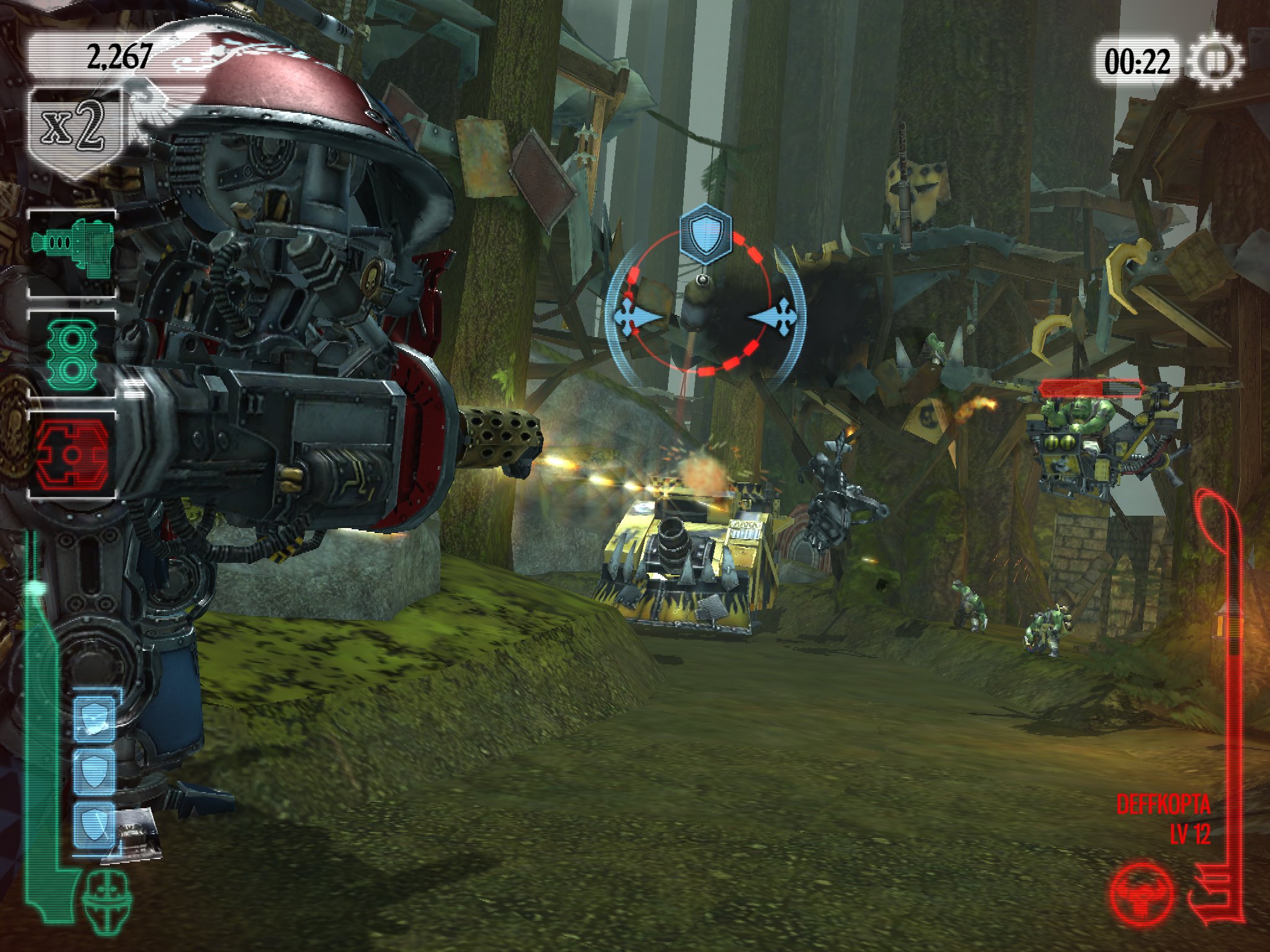 But there’s one thing that really bugs me about the game: for most of the time, the monetization is honest. But it’s the energy system that rankles me. At first, it seems fair, like the game is really only draining your energy really slowly, not really impacting you unless you’re playing for a really long time, and the energy is there to make sure you don’t get bored of the game. But instead, once you hit 60% energy, the game weakens you, forcing you to either watch an ad to get 10% more energy, pay gold to refill, or wait until you’re back at full strength.

It’s disappointing, because it’s so misleading. You think you have a game that’s certainly not lacking monetization tactics, but seems fair enough. And then it makes 60% energy be basically 0% energy, since the game requires you to be at full strength to do well enough to get the medals you require to progress. It stinks and should not be there, or should be more honest to the player. But instead, the game seemingly just uses it as an excuse to stop you in your tracks and make you feel bad about continuing to play. Again, I’m fine with most everything else; I know the realities of the market right now. But this just feels like a jerk move on the game’s behalf, and should be modified or eliminated entirely in a future update, because it sours the entire experience.

After a while, I felt like I had quite caught the gist of Freeblade. Its structure pretty much means that you need to get caught up in enjoying the cycle in its short bursts, and at some point, you may fall out of it. Freeblade isn’t a bad game, but it just kind of becomes something where you’re like “Well, I’ve had enough." And the energy system is annoying, too. You should download this if you have a 3D Touch device, just to see what’s possible in games with that functionality. And if you love the Warhammer universe, giant robots, or just want an action game you can play for quick bursts, you will enjoy some time with this game. But the constant monetization attempts, while fair, do wear down your nerves. And that energy system is a killer that keeps this from being a good game and a solid recommendation.